Ryan, of Hatteras Jack, reports that anglers fishing in the sound are finding great action on both speckled trout and slot-sized red drum.

Bluefish are pushed inside and being found in the deeper channels and holes.

Bottom fishing in the surf has been good with a mix of spot, croakers, and pompano.

Some nice-sized black drum are hitting fresh shrimp fished in holes along the beach, and red drum are in these same deeper areas feeding on fresh cut baits.

Nearshore anglers are finding schools of bluefish and spanish mackerel right off the beach.

Leslie, of Rodanthe Pier, reports that plank anglers are seeing a wide variety of species being landed, with croakers, sea mullet, and scattered gray trout all being caught with fresh natural baits on bottom rigs.

Ribbonfish and some smaller blacktip sharks are hitting cut baits.

Flounder are starting to show up for anglers fishing behind the breakers, and sheepshead have moved in around the pilings and are feeding on sand fleas and crabs. 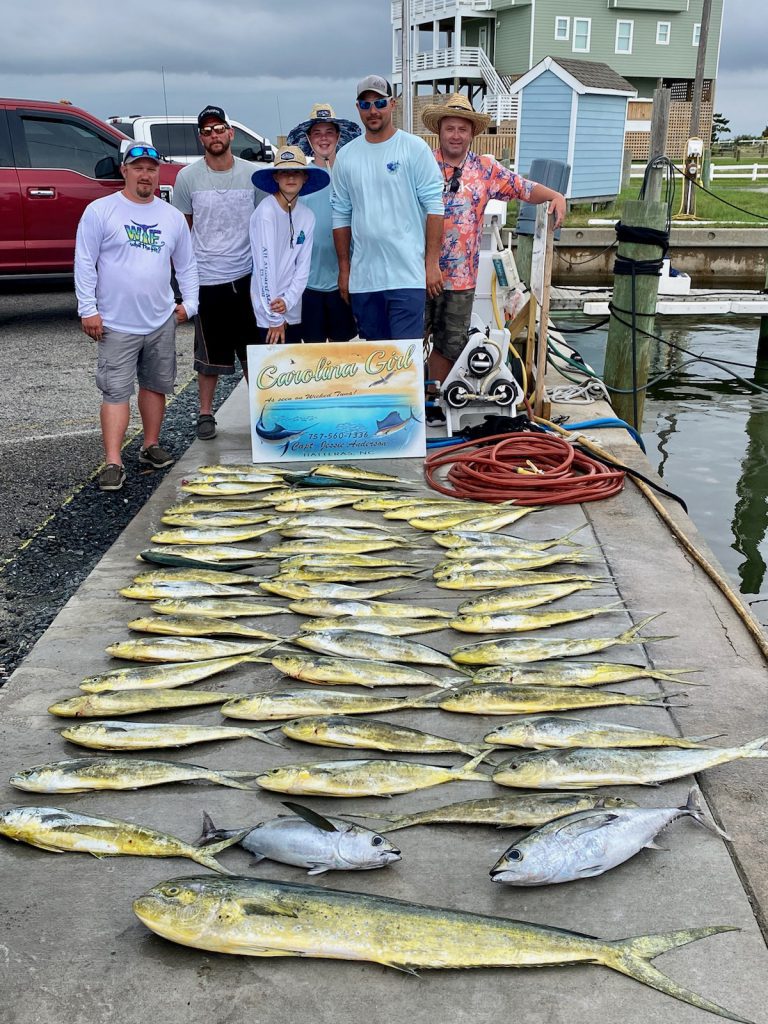 The Smith party with a box full of mahi and a couple of blackfins. They were pulling skirted ballyhoo along a grass line in 200 fathoms with Capt. Jessie Anderson of Carolina Girl Sportfishing out of Hatteras Harbor Marina.

Heather, of Frank and Fran’s, reports that summertime fishing focuses on the strong bottom fish bite. A mix of sea mullet, croakers, and spot are all hitting a variety of fresh natural baits and artificial bait strips.

Puppy drum (up to 26”) are being caught with Carolina-rigged cut mullet, and some good-sized pompano are being landed by anglers fishing baits in deep holes up against the beach.

Sound-side anglers are landing puppy drum and speckled trout (up to 20”).

Don, of Avon Pier, reports that plenty of spanish mackerel and bluefish are being found schooled up within casting distance of pier anglers.

Bottom fishing has been producing sea mullet, croakers, and some smaller flounder.

Anglers fishing cut baits are hooking into large skates and a variety of sharks.

Cameron, of Frisco Tackle, reports that pompano have been the main target for anglers hitting the surf zone. Casting smaller cut shrimp and baits into the deeper holes just off the sand has been the most productive tactic.

Bluefish are running in the deeper channels between the breakers, and they’re hitting bottom-rigged baits and casting jigs.

Lee, of Teach’s Lair, reports that dolphin fishing has been very strong over the past week, with large schools now moved into the area. Some trips are getting easy limits, with sizes varying from large bulls to smaller bailers. Scattered blackfin tuna are feeding alongside the mahi.

Billfish action is picking up, with large blue, white, and sail releases in the daily counts.

The offshore bottom fishing has been good, with tilefish, grouper, triggerfish, and snapper all hitting cut baits and jigs.

Some large barracuda are being picked up around these same structured areas.

Nearshore and inshore anglers are finding some citation class red drum (up to 45”) around the inlets. A few cobia are mixed in for anglers fishing larger baits.

Speckled trout action has been great in the sound, with limits of fish hitting a mix of artificials and live bait. Black and red drum are taking bottom-rigged baits fished on flats and inshore ledges.

Joey, of Fingeance Sportfishing, reports that speckled trout fishing has been great for anglers fishing 3” Z-Man MinnowZ on 1/4 oz. jig heads. The Bleeding Banana color pattern has been the top producer this month.

Slot-sized red drum have been striking gold spoons for anglers sight-casting to schools on the flats. On windier days, anglers are having success cut bait fishing with mullet.

Cobia fishing has been very good when bait fishing in the deeper channels. This bite stays steady through July as the fish finish their spawning period.

Spanish mackerel and bluefish have shown up in really good numbers both along the beachfronts and into deeper areas of the sound. 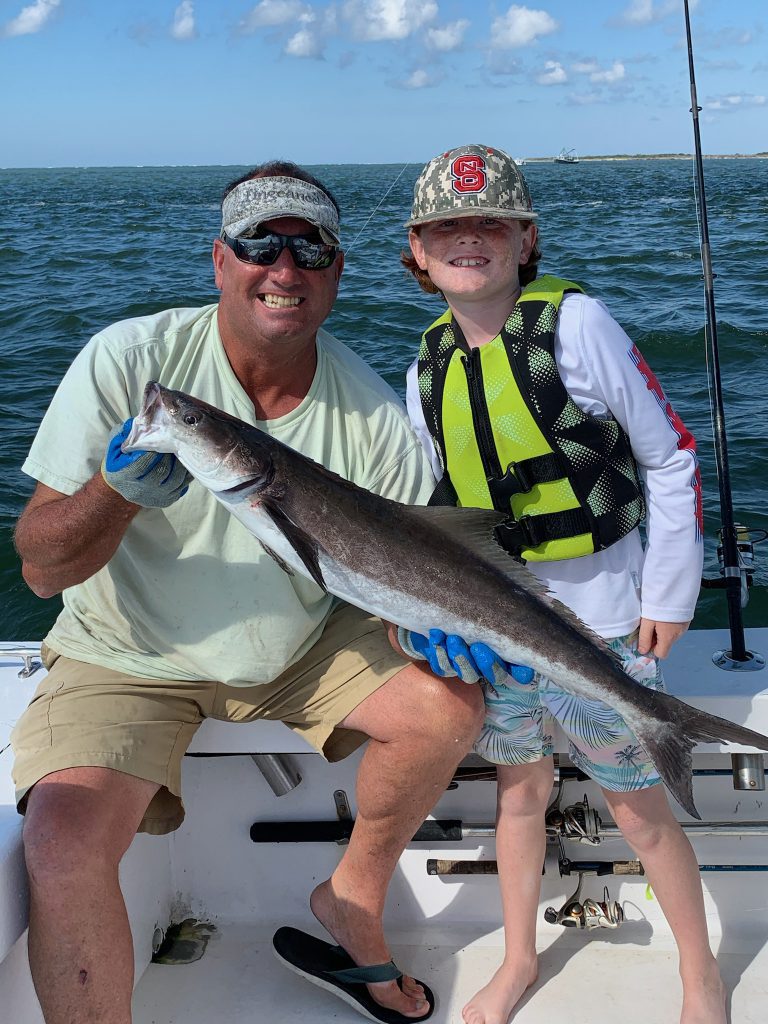 Watson Marshall (right) with a cobia caught while cut bait fishing in the Hatteras Inlet. He was fishing with Capt. Joey Vandyke (left) of Fingeance Sportfishing out of Hatteras Harbor Marina.

Jay, of Bite Me Sportfishing, reports that there has been very good dolphin fishing, with the larger schools finally arriving in the area. Double digit numbers have not been uncommon while targeting areas of scattered grass and grass patties, and fish sizes have ranged from gaffers to large bulls (up to 51 lbs.).

A few football blackfin tuna are mixed in the trolling action.

Blue marlin (to approx. 600 lbs.) are hitting bigger baits for anglers working outside the grass lines. White marlin and sailfish are also in the mix.

Jeremy, of Calypso Sportfishing, reports that mahi action is great, with the large schools now showing up for anglers both trolling and bailing fish from under grass in the region. Many trips have been returning with their limits.

Scattered blackfin tuna are mixed in the fish counts.

Billfish are showing up well in the area, with some big blue marlin and scattered whites holding out in the deeper water.

Jessie, of Carolina Girl Sportfishing, reports that mahi fishing has been spectacular, with a great mix of gaffers, slingers, and bailer-sized fish. Trips are finding their limits while pulling ballyhoo around grass lines.

After wearing out the mahi, it’s an option to run deep in search of a big hookup on one of the many billfish holding in the area.

Alan, of Tradewinds Tackle, reports that surf anglers have been landing some nice-sized puppy drum (up to 25”) while fishing fresh cut baits in the surf.

Soundside action has picked up a lot now that water temperatures have settled. Puppy drum are grouped up in good numbers, and they’re hitting soft plastics and cut baits.

Black drum are being caught around structure and ledges with fresh shrimp.

Speckled trout are being found alongside both of the drum species, and the trout are falling for live baits and a wide variety of artificial lures.

Bluefish are schooled up in deeper channels and taking soft plastics and cut baits.