Ryan, of Hatteras Jack, reports that surf anglers are finding some pockets of puppy drum while casting soft plastics in holes around Frisco.

Black drum are being caught with shrimp around the jetties in Buxton.

The next few weeks has anglers anticipating big changes along the surf. The bite will start picking up on the southern facing beaches around Frisco first. Blow toads usually start to arrive when water temperatures reach the upper 40s, and sea mullet are right behind them in the lower 50s. Bloodworms and shrimp are the top producing baits for both species.

This winter doesn’t seem to be setting up for a large water temperature jump, but look for bluefish and better numbers of red drum around the end of the month, if water temps get around the mid 50s. 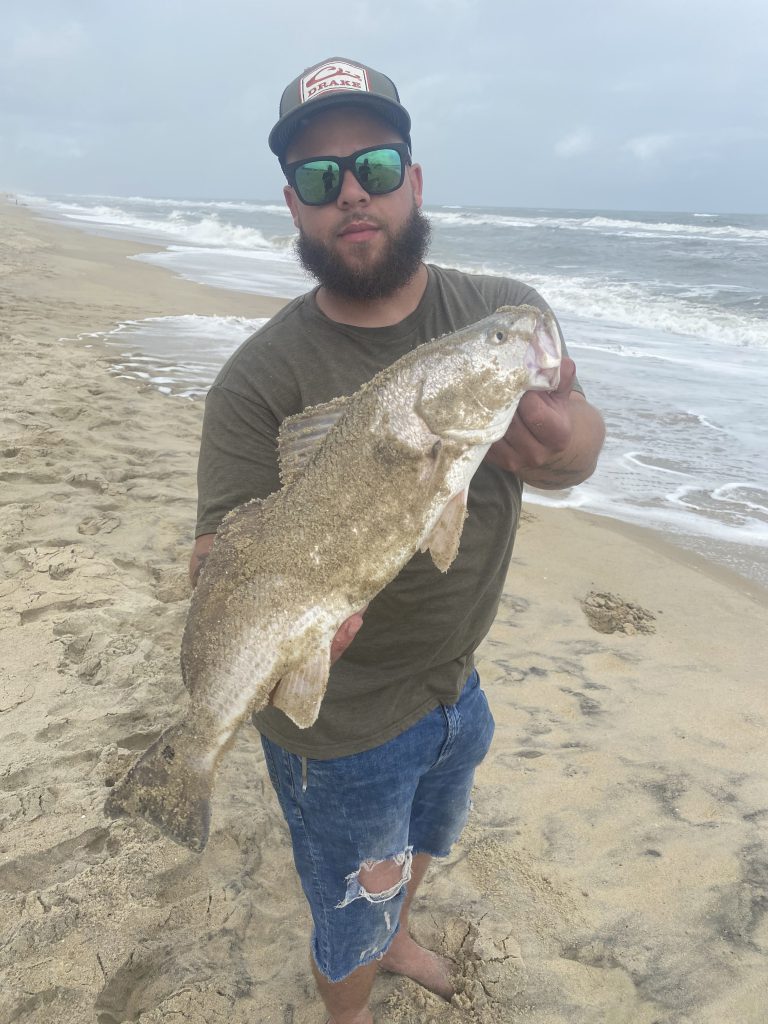 Kevin Maynor with a 4.2 lb. red drum that fell for a FishGum bait while fishing the surf in Hatteras.

Rodanthe Pier is closed for the winter and will reopen in spring.

Heather, of Frank and Fran’s, reports that surf anglers looking to take advantage of days without rain are finding some action on cut baits. Dogfish sharks provide a great fight for these winter anglers, and the cut bait have also produced a stray red drum or two.

A few black drum have been caught recently with bait shrimp.

Going into the next few weeks, expect cut baits and shrimp to be the most productive in the cold water. Blow fish tend to arrive in March and will be caught with bottom-rigged baits. Scattered reports of red and black drum will be mixed in right into the arrival of sea mullet and bluefish.

Avon Pier is closed for the winter and will reopen in spring.

Lee, of Teach’s Lair, reports that weather on Hatteras Island has kept fishing to a minimum, as anglers look forward to the dredge opening channels to run offshore again. Once that happens (in the next couple weeks), reports of blackfin and yellowfin tuna should start showing up with regularity.

Then around the end of March, a few early season mahi could start to show up.

All three of the above species will only get more prevalent as spring weather moves into the area.

Joey, of Fingeance Sportfishing, reports that success for anglers on the Outer Banks is very weather dependent going into March.

Red drum will be the main target, as they held over in the area all winter. Warmer days bring better chances of success with finding these schools up on the inshore flats looking to feed.

The Albemarle Sound’s mainland rivers (Roanoke and Neuse) will be seeing the start of the annual shad run in the next week or two.

Striped bass fishing picks up right behind the shad, as large schools of fish move from the sounds into the river mouths. Through the end of March and beyond are the target dates for epic striped bass fishing. 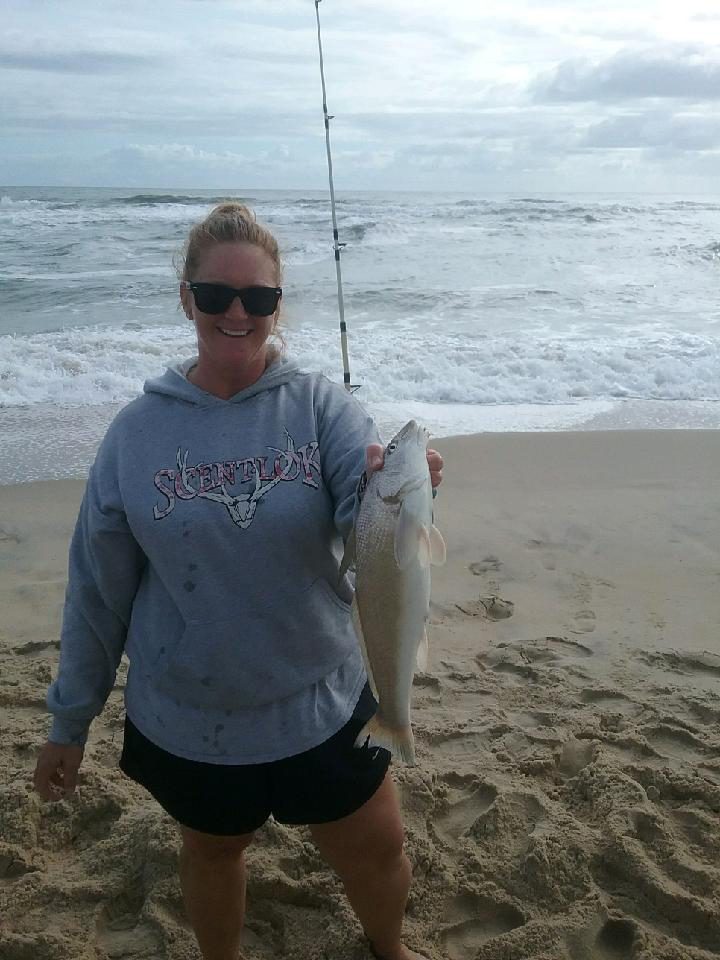 Tracy Barnes, of Advance, caught this sea mullet on a sand flea while fishing the surf in Avon.

Jeremy, of Calypso Sportfishing, reports that March can be the beginning of tuna action on the Outer Banks. Yellowfin, blackfin, and a few bluefin tuna will be hitting the docks after days of pulling ballyhoo on the go-to Sea Witch rigs.

There is a small chance that some early season mahi will be caught in the Stream, though the bite becomes more consistent in April.

Jay, of Bite Me Sportfishing, reports that some bluefin and bigeye tuna are being caught by boats running north of the area. Blackfin tuna should be staged up over rocks off Hatteras for anglers looking to jig.

King mackerel are showing up to the south around the 880’ break.

Going into the next month, the yellowfin, blackfin, wahoo, and some mahi will all start showing up. Weather dependent, March is a great time to get on the water and get a jump on spring fishing.

Alan, of Tradewinds Tackle, reports that surf anglers will be looking forward to red drum fishing going into March. Currently, a few scattered puppy drum are hitting cut baits for those stumbling onto the correct holes at the correct tides.

The yearling-sized redfish show up around mid-March. Once these larger specimens arrive, the bite starts getting really consistent and stays that way well into April.

For anglers looking offshore, the action focuses on yellowfin tuna that present around the end of the month.