Ryan, of Hatteras Jack, reports that surf anglers are having success in landing sea mullet and black drum with bottom rigs. Puppy drum are moving along the beaches and will also be caught on cut shrimp and mullet.

A few smaller bluefish have started to push onto the beachfronts. Over the next few weeks, the warming water temperatures will bring in many more reports of schools moving into the area.

More days with stronger south winds will have anglers bringing in even more citation-class drum from the Hatteras beaches.

Sound-side anglers are catching puppy drum and some speckled trout. As inshore waters warm, the fish will get significantly more active in their feeding cycles. 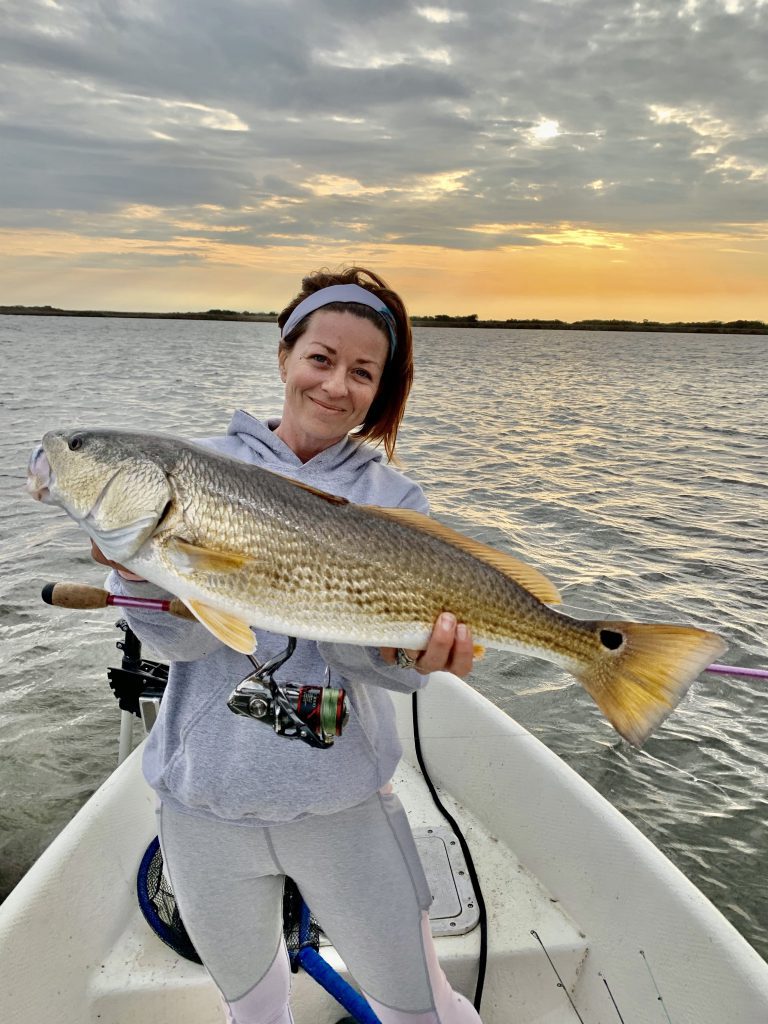 Erin Porter, from Rodanthe, with a red drum caught using a “Fried Bologna” Z-Man soft plastic. She was fishing a flat in the Rodanthe sound. Photo courtesy of Hatteras Jack.

Debbie, of Rodanthe Pier, reports that bottom fishing has been most productive, with water temperatures still hovering down around 59 degrees. A mix of sea mullet and blowtoads are the majority of what’s been coming over the rails.

Anglers expect to see bluefish mixed in any day.

Red drum are being caught on beaches to the south, so the Rodanthe area should see some puppy drum caught as the reds move their way up the island.

Heather, of Frank and Fran’s, reports that anglers are starting to catch more puppy drum (up to 27”) while fishing fresh cut mullet.

A few black drum are mixed in for anglers fishing bottom rigs.

Denny, of Frisco Tackle, reports that bottom fishing has been producing good numbers of sea mullet and blowtoads.

Smaller, tailor bluefish are starting to show up in the area. With water temperatures warming over the next few weeks, expect to see more schools following bait onto the beachfronts.

Some small to puppy-sized red drum are being caught in both the surf and sound side canals.

Anglers fishing the Point and areas around ramp 55 are landing some large red drum.

Speckled trout fishing has been sporadic, but as sound temperatures rise, the bite will be picking up with active fish.

Lee, of Teach’s Lair, reports that tuna fishing has been very good for the offshore anglers. A good mix of blackfins and yellowfins are coming back in the fish boxes.

Wahoo are scattered in the counts, alongside some early season mahi.

Inshore trips are catching both citation-class and slot red drum in the sound.

Speckled trout fishing has been a bit slow as water temperatures inside just start to turn up.

Offshore trips are starting to see some blue marlin popping up in the spreads.

Dolphin fishing picks way up, with May being a great month for both size and numbers of fish. These schools are still working their way north into the Carolinas, and anglers will see some of the largest specimens in this first wave.

Joey, of Fingeance Sportfishing, reports that red drum fishing has been great. Anglers have been sight-casting to large schools of citation-sized fish that are running the beaches.

Slot-sized red drum are holding in good numbers throughout the sounds for anglers fishing cut baits.

Speckled trout action has been picking up now that water temperatures are rising. Look for these fish to be feeding alongside the red drum near inshore ledges and flats.

Jay, of Bite Me Sportfishing, reports that yellowfin tuna and scattered blackfin tuna have been providing most of the action on recent trips. Some wahoo and large false albacore are also mixed in on the trolling bite.

Blue marlin are already in the area, with a recent trip able to raise fish onto the teaser. Going into the next few months, this bite picks way up with the arrival of warmer waters.

Some early dolphin are showing up heading into May, which tends to be one of the best months to target them.

Jeremy, of Calypso Sportfishing, reports that offshore fishing is starting to fire up in the 30-55 fathom range as weather patterns allow for more fishing days.

Yellowfin and good-sized blackfin tuna are being caught on ballyhoo rigged on Sea Witches.

There are some good-sized king mackerel moving around and hitting the skirted ballyhoo.

Mahi are mixed in the counts, which is a great sign of the season to come. May is a spectacular month for mahi action, and plenty of these first couple waves of fish are larger. 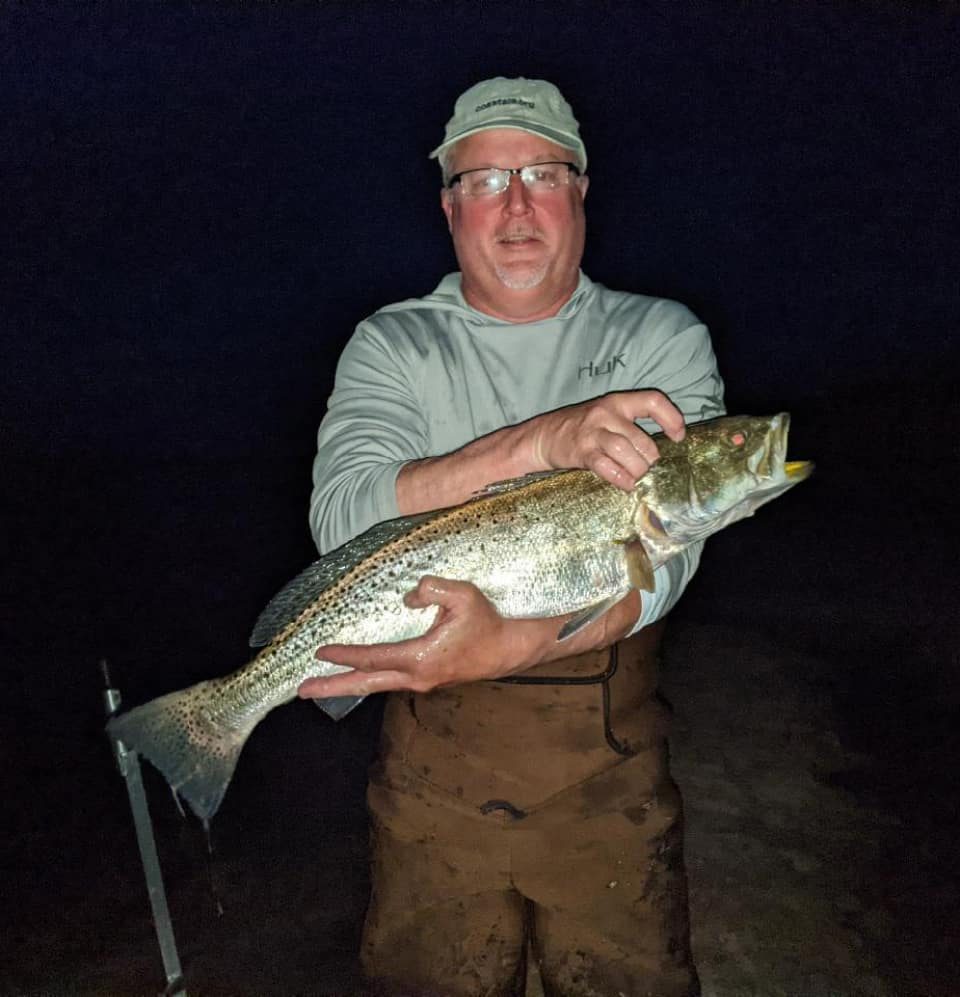 Charlie Shade with a 6.8 lb. speckled trout that fell for a puffer rig with cut mullet. He was fishing the Pamlico Sound near Buxton.

Jessie, of Carolina Girl Sportfishing, reports that both yellowfin and blackfin tuna are being caught by anglers making runs to the south or east. Most of the action has been from trolling, and there are some big wahoo mixed in on the trolling action.

Billfish are already showing up in the area, which is a great start to the season.

Bottom fishing has been producing really good numbers of triggerfish and snapper.

A few mahi are already popping up, and generally it takes a couple weeks to see the mahi action really take off as the schools migrate into the area.

Kristen, of Tradewinds Tackle, reports that puppy drum fishing has been steady for anglers fishing shrimp and mullet on bottom rigs. A few bigger red drum are being caught by anglers fishing in the evenings.

Sea mullet, black drum, and some early bluefish are being caught by smaller bottom rigs with cut shrimp.