Erin, of Hatteras Jack, reports that surf anglers have been catching good numbers of red drum with fresh cut baits. Anglers have been pleased to find plenty of slot-sized fish around, with the occasional over-slots (32+”) mixed in. The local piers have been seeing some good catches of the citation-class reds.

Anglers out at the Point have enjoyed blitzes of big bluefish and spanish mackerel.

Bottom fishing has been producing black drum and sea mullet.

Anglers fishing in the sound are finding good speckled trout action as the bite heats up going into fall. 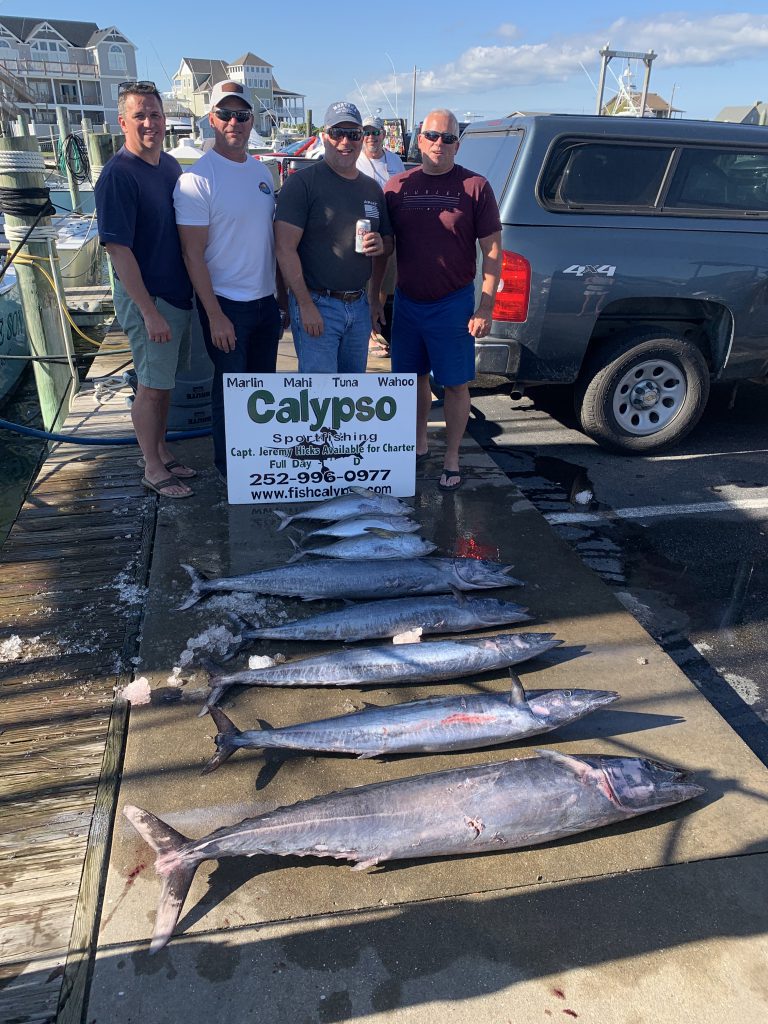 Ken Miller and crew with a catch of wahoo and blackfins. They were fishing 200-300′ of water with Capt. Jeremy Hicks of Calypso Sportfishing out of Hatteras Harbor Marina.

Leslie, of Rodanthe Pier, reports that puppy drum action has been steady, and there’s also been the bonus of trophy red drum in the mix.

Larger bluefish (to 3+ lbs.) are being caught with both cut baits and plugs.

Bottom fishing has been producing good-sized sheepshead, sea mullet, and some spot.

There are also a lot of flounder being caught (as they migrate going into the fall season).

Heather, of Frank and Fran’s, reports that there has been some good sight-casting action with schools of bluefish, false albacore, and spanish mackerel running past the piers and up within reach of surf anglers.

Bottom rigs have been producing croakers, sea mullet, and blowtoads.

Bloodworms have been great for catching pompano and black drum, and red drum are cruising the beaches and hitting Carolina-rigged fresh cut bait.

Donald, of Avon Pier, reports that anglers are catching bluefish and some of the spanish mackerel that are still around. The best tactic has been casting plugs.

Some good-sized sheepshead have been brought in over the last few days, along with scattered pompano.

Cut baits have been producing sharks and skates, but there are red drum in the area. Any slight change in conditions can turn the red drum bite right back on.

A few speckled trout have also begun to show up after the last cold front pushed through.

Denny, of Frisco Tackle, reports that bluefish action has been good, and anglers have been successful with both casting jigs and cut baits.

There have been some good numbers of puppy drum being caught now that the reds are moving out of the sounds to feed along the beachfronts.

Bottom rigs are producing a mixed bag of smaller species, from pompano to mullet to croakers.

Lee, of Teach’s Lair, reports that bluefish and spanish mackerel are being caught from deeper areas inshore, inside the inlets, and along the beachfronts.

Offshore anglers are looking forward to November as the conditions change with the seasons. The last part of October saw hit or miss action, but the more frequent cold fronts coming through are about to fire the offshore action back up.

Anglers looking for a break from trolling are catching good amounts of mixed bottom fish.

Joey, of Fingeance Sportfishing, reports that anglers have been having a blast with some schools of large (to 10 lbs.) bluefish hanging around in the sound. Drifting by these surface-feeding schools and casting Stingsilvers into the action has been producing strikes.

Anglers are also having success while anchoring up and fishing cut baits for some of the many puppy drum around.

Speckled trout action is starting to really heat up now that inshore water temperatures are cooling. Look for the trout to be the go-to targets over the next month as they actively move around to feed on bait as it flushes out of the sounds.

Noah Eller with an 8.5 lb. bluefish caught near Harkers Island on a Halco slow-sinking bait. He was fishing with Capt. Noah Lynk of Noah’s Ark Fishing Charters.

Jay, of Bite Me Sportfishing, reports that with the warmer water temperatures that have been hanging around, there are still a few dolphin in the area.

Some large blackfin tuna (to 32 lbs.) and scattered wahoo are making up the majority of offshore action, and the cooler weather and water temperatures finally moving in will crank up the bite for both species.

Jeremy, of Calypso Sportfishing, reports that anglers are finding wahoo on the Gulf Stream trips. Targeting areas of bottom structure has been key in getting strikes from what has been a larger class of fish.

Some blackfin tuna are mixed in the action for anglers fishing around SE rocks.

King mackerel action has been great, with large fish (to 50 lbs.) being caught while live baiting.

Jessie, of Carolina Girl Sportfishing, reports that king mackerel action has been hot, with some large fish (to 32 lbs.) being caught while live bait fishing.

Huge spanish mackerel (to 8 lbs.) have been mixed in the nearshore action.

Kristen, of Tradewinds Tackle, reports that there has been plenty of puppy drum running in the surf zone. Fresh cut baits have been best for getting in on the red drum action.

Closer to shore, anglers set up with bottom rigs are landing good numbers of smaller pompano, flounder, and tons of bluefish.

Anglers running off the beach are catching some large king mackerel (to 40 lbs.) while live bait fishing.