Mark, of Hatteras Jack, reports that surf anglers have been doing very well now that water temperatures in the area have dropped off summertime highs.

Red drum are being caught by anglers fishing Carolina-rigged fresh cut mullet and shrimp, and black drum and good-sized whiting are in the mix, with most being caught on shrimp.

Bluefish and some spanish mackerel are being landed by anglers casting jigs at bait balls running just off the beach.

There are plenty of puppy drum around, and better numbers of speckled trout are being hooked back in the sound.

Jim, of Rodanthe Pier, reports that spanish mackerel and bluefish schools have been prevalent now that water temperatures are cooling. Smaller jigs are providing most strikes when cast around bait balls cruising past the pier.

Puppy drum are feeding on cut baits, mostly on days with rougher water conditions. Anglers fishing cut and live baits are catching some sharks, too.

A few good-sized sheepshead have been brought in by anglers fishing baits up against the pilings. 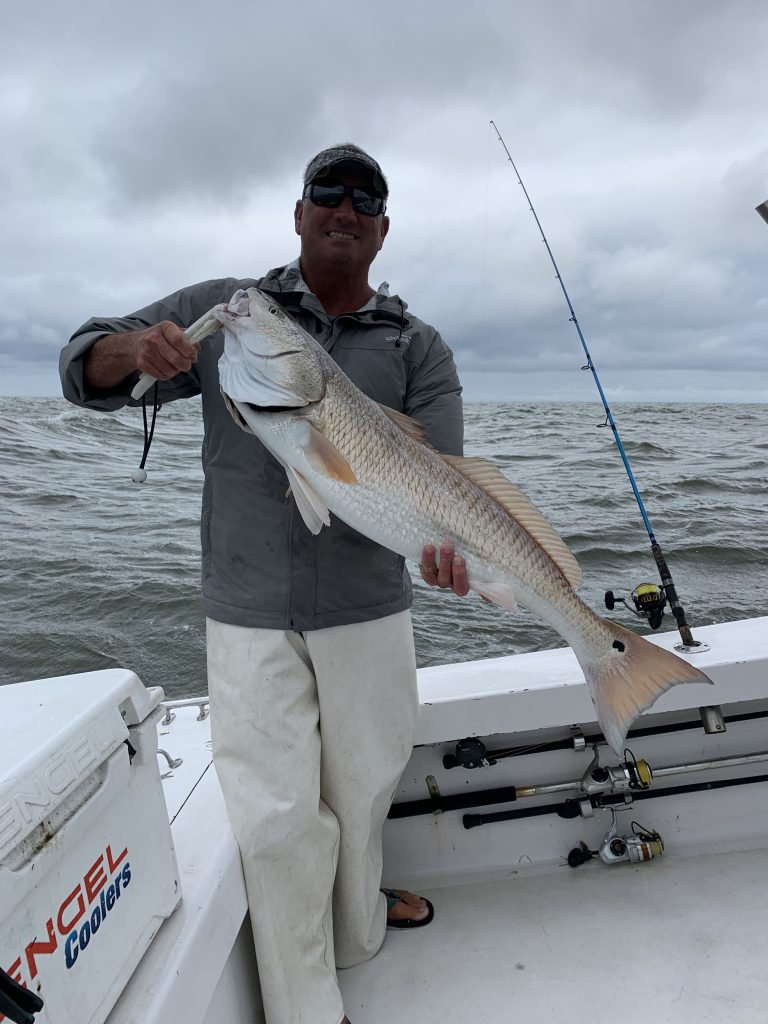 Capt. Joey VanDyke, of Fingeance Sportfishing out of Hatteras Harbor Marina, with an over-slot drum he landed targeting some whitewater in the Pamlico Sound behind Buxton.

Heather, of Frank and Fran’s, reports that good numbers of puppy drum (to 26”) have moved into the surf zone from Avon up through Rodanthe, and anglers with bottom rigs are also catching spot, sea mullet, and some pompano.

Bait pushed along the beach has brought bluefish within casting distance of anglers on the sand.

Sound-side anglers have been finding really good numbers of speckled trout, and they expect the bite to only get better as the waters cools. There are plenty of puppy drum mixed in with the trout action in the sound.

Keith, of Avon Pier, reports that there has been good fishing for the large red drum (to 40 lbs.). As weather patterns lean more towards north wind patterns, this fishery should get even better.

There has been a large class of spanish mackerel hanging around the pier. These fish are migrating south as water temperatures cool. Spanish mackerel should stick around for a little longer, but one cold front will push them away.

Bottom fishing anglers have been catching plenty of small pompano.

Denny, of Frisco Tackle, reports that cooling water temperatures have surf fishing action good from the point all though Hatteras. Spanish mackerel and bluefish schools are actively feeding on bait balls cruising up and down the beach. Casting jigs are working great in deeper channels between sandbars and on the local piers.

Scattered puppy drum are becoming more common with the season change. Expect the red drum action to get even better going into October as the schools follow bait out of the sounds.

Lee, of Teach’s Lair, reports that offshore trolling has produced good-sized blackfin tuna. A few scattered wahoo are mixed in, and this action picks up more as cooler weather settles in.

A few scattered billfish are still around, along with swordfish (to 132 lbs.) for anglers running deep dropping trips.

Finding grass cover offshore has been generating good catches of dolphin, and fishing bottom structures has been producing plenty of vermilion snapper, triggerfish, and barracuda.

Inshore trips have been enjoying good fishing for slot-sized red drum, with speckled trout now showing up more, and some anglers are catching citation-class red drum as the schools start to move out of the sounds.

Spanish mackerel and bluefish are schooled up in deeper inshore channels and out to the beachfronts. 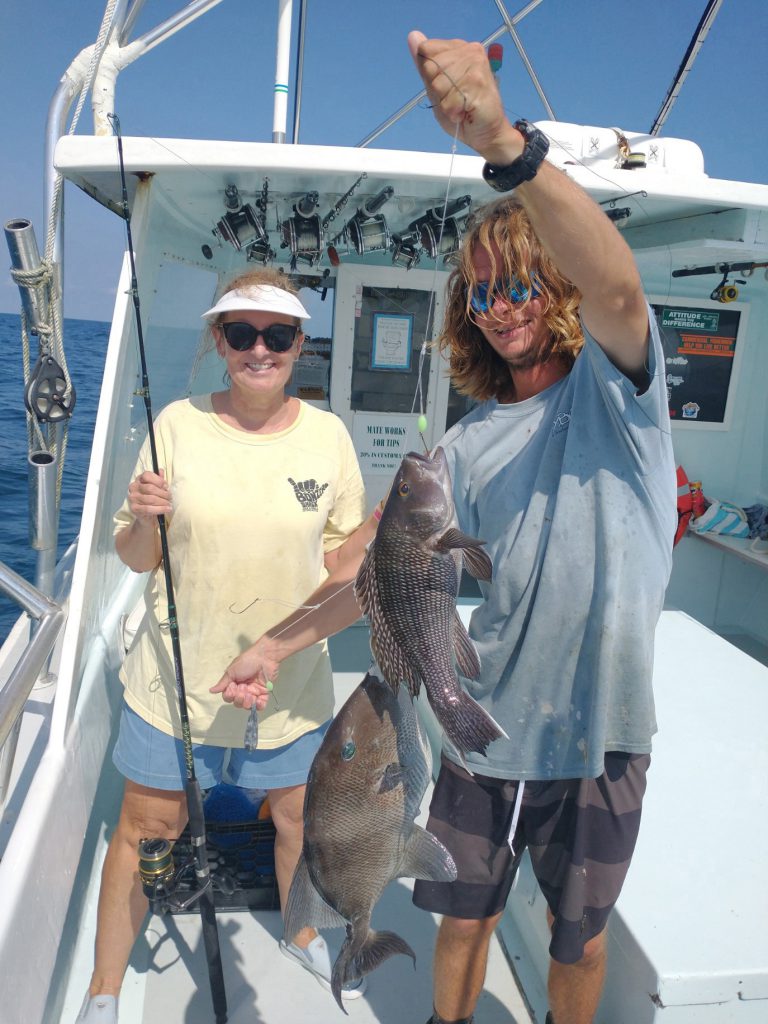 Donna DelFera (left) and Mate Tater with a seabass and triggerfish that fell for cut mackerel. She was fishing out of Hatteras Inlet with Capt. Patrick Caton on the Little Clam.

Joey, of Fingeance Sportfishing, reports that there has been very good trout fishing in the sounds. Anglers have had plenty of success with 3” Z-Man soft plastics in both pinfish and creole-croaker color patterns.

With days of higher winds, anglers are finding red drum fishing to be strong. Cut mullet fished on the bottom produces the most action, and when the conditions aren’t windy, sight-casting at schools is also a great option.

Trips to deeper areas around the inlet are seeing great casting action on bluefish and spanish mackerel.

Jay, of Bite Me Sportfishing, reports that some good-sized blackfin tuna (to 24 lbs.) are starting to show up, and mahi are still being found schooled up under grass and floats.

Anglers are pleased to still find some blue marlin (est. 250 lbs.) to strike at the trolled offerings.

Wahoo are scattered in the counts, with most hitting the high speed lures.

Jeremy, of Calypso Sportfishing, reports that offshore action has enjoyed some citation-class blackfin tuna (to 25 lbs.) moving into the area.

Scattered dolphin and sailfish are mixed in the counts, and the wahoo action is slowly getting better, with some large fish (to 52 lbs.) filling out the counts.

Jessie, of Carolina Girl Sportfishing, reports that blackfin tuna are hitting Green Machines and baits pulled behind birds up to the east of Hatteras. Anglers look forward to the tuna action getting even better as temperatures cool.

There are some dolphin staged under grass patties in the area. These are some good-sized fish, too, with many being larger slingers and gaffers, compared to the smaller, mid-summer schools.

Some scattered wahoo are in the mix, though that action hasn’t quite fired off just yet, and the occasional billfish, mostly consisting of sailfish, are still showing up in the spreads.

Bottom fishing has been really good, with large triggerfish and plenty of snapper around.

Alan, of Tradewinds Tackle, reports that anglers on the beaches are catching strong numbers of bluefish on both cut bait and casting jigs. The occasional spanish mackerel schools are also following baits to within casting distance. The next few weeks should see some decent spanish mackerel action before the back end of the month where cooler water temperatures push the fish away.

Sea mullet and scattered pompano are being caught with bottom-rigged baits, and some puppy drum are starting to filter back in. This bite gets even better as cooler water has the drum following bait out of the inlets. Some of the over-slot reds will be mixed in as they follow this same pattern.

Sound side anglers are having success with large red drum while bait fishing around inshore shoals and the inlets, and puppy drum and speckled trout are being caught on the flats with topwater plugs and popping cork setups.

Smaller cut baits are producing sea mullet and pompano in deeper cuts inside the inlet.