Ryan, of Hatteras Jack, reports that surf fishing remains strong even in the hot water temperatures. Bottom fishing is a great tactic during these heat spells, with a variety of croaker, spot, and sea mullet all around in good numbers.

The advantage to fishing with fresh shrimp is the possibility of adding black drum into the daily action.

Some puppy drum are in the mix for anglers fishing cut bait. Days with the water stirred up tend to see more red drum bites.

Soundside anglers are catching puppy drum and flounder up on the flats with soft plastics and cut bait.

Speckled trout fishing continues to be great, with popping cork setups and topwater plugs getting plenty of action.

Bluefish are holding in some of the deeper channels and in holes, and they’re striking casting spoons.

Jim, of Rodanthe Pier, reports that sea mullet and croakers have been very active for anglers fishing baits on bottom rigs.

Sheepshead are hanging around the pilings and are mixed in the daily counts.

A few king mackerel (to 25 lbs.) are being caught by anglers live bait fishing off the end, and a couple blacktip sharks have also been caught on the live pin rigs. 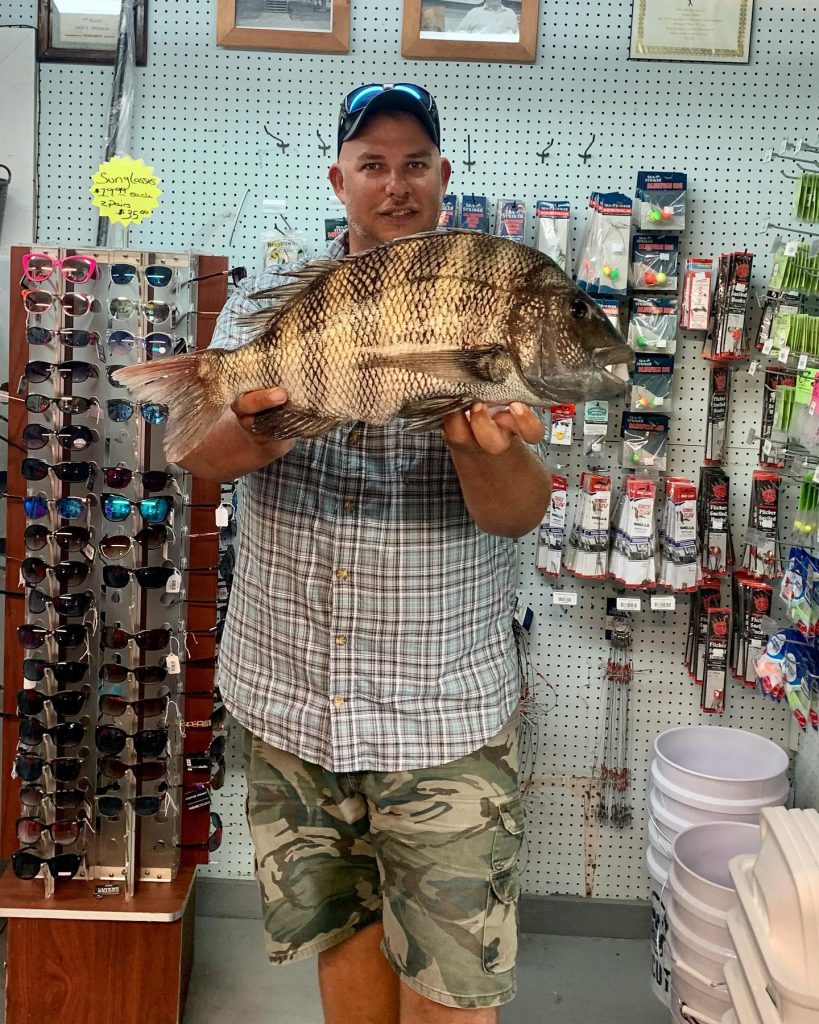 Travis Pastell with a 24” citation sheepshead that was caught using a sand flea while fishing the Hatteras area.

Heather, of Frank and Fran’s, reports that bluefish and some larger spanish mackerel (to 5 lbs.) are being caught in the Avon area with casting jigs.

Bottom fishing has been really good, with bloodworms producing best (when available). A mixed bag of sea mullet, croaker, and pompano are all being reported.

A few nice-sized flounder are being pulled in from deeper holes just off the sand.

Anglers fishing in the sound are catching puppy drum and some solid speckled trout (to 22”).

Keith, of Avon Pier, reports that spanish mackerel (to 5.5 lbs.) action has been good, with getting on the planks early being a big key to success.

There are scattered bluefish mixed in with the action on plugs and casting jigs, and quite a few small cobia have also been hitting Gotcha plugs.

Bottom fishing has been producing a good number of pompano.

Lee, of Teach’s Lair, reports that some large wahoo (to 43 lbs.) have shown up in offshore counts. Dolphin fishing has been steady. Most of the mahi action is dependent on finding schools staged up under grass lines. Some tuna and scattered sailfish round out the trolling bite.

Nearshore trips are finding plenty of spanish mackerel and bluefish while trolling and casting jigs off the beach. Anglers have also found a few cobia (to 40 lbs.) while riding along the beaches.

Joey, of Fingeance Sportfishing, reports that nearshore anglers have been primarily targeting the good numbers of bluefish and spanish mackerel off the beaches. Both trolling Clarkspoons and casting Gotcha plugs at surface-feeding fish are producing strikes.

Red drum fishing is just starting pick up again as it gets away from peak summer temperatures. Look for the redfish action to get steadily better all month.

Jay, of Bite Me Sportfishing, reports that trolling high speed lures is producing some good-sized wahoo.

Dolphin action has been good, with it being key to locate grass or other flotsam that will be holding fish, and a few scattered blackfin tuna are mixed in the trolling bite.

Anglers looking for the big fish are finding some action with blue marlin and sailfish in the deeper waters. 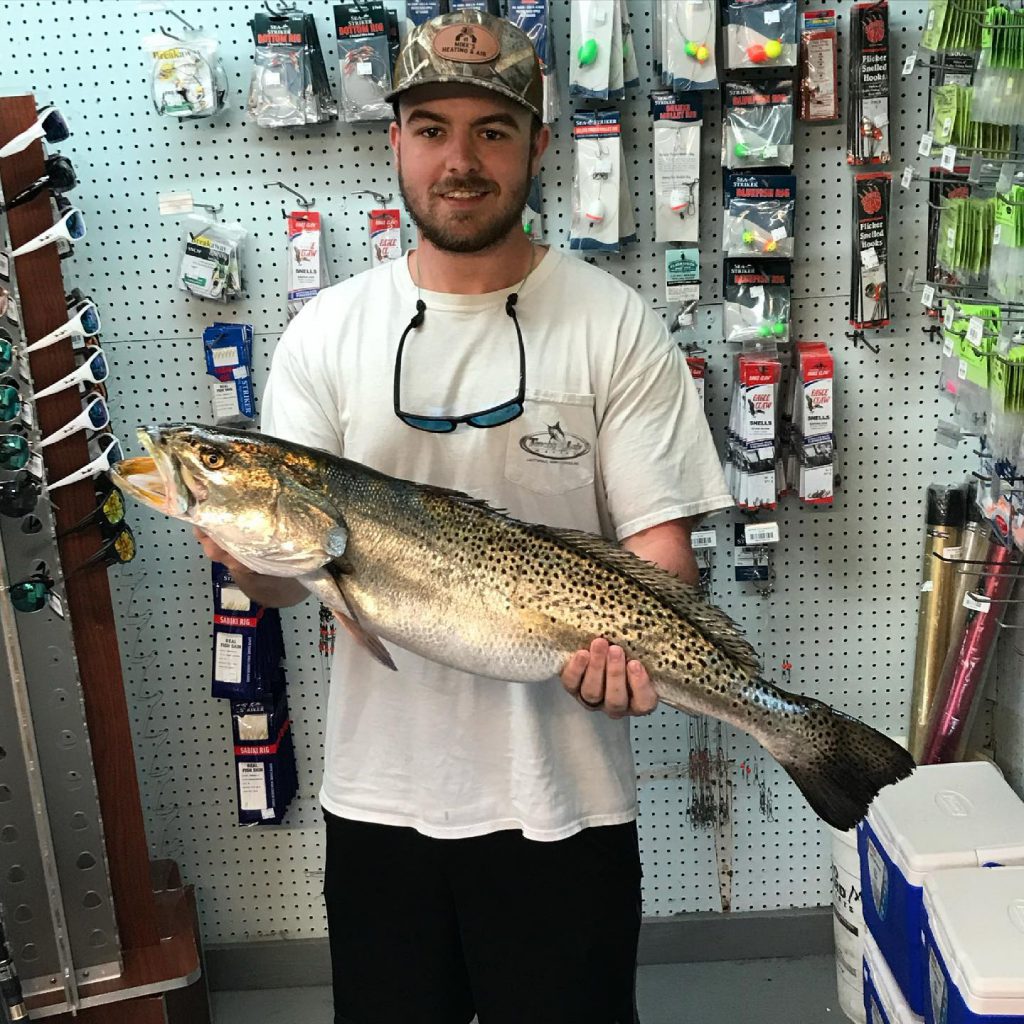 Jacob Wray with a 31.5” speckled trout that fell for a popping cork while fishing in the Hatteras area. Photo courtesy of Hatteras Jack.

Jeremy, of Calypso Sportfishing, reports that anglers are catching limits of dolphin when the offshore conditions are right for finding floating grass and debris holding schools of fish.

Wahoo have been showing up in better numbers at it gets closer to fall. The bite is a bit scattered, but the fish caught are all good-sized.

Jessie, of Carolina Girl Sportfishing, reports that some big blue marlin and sailfish are just a part of the strong billfish bite going on over the last few weeks.

There have been tons of mahi holding offshore, with plenty of trips getting their limits.

Wahoo have shown up a bit early, and these first ones all seem to be good-sized. This could be a great sign looking forward to the fall.

Kristen, of Tradewinds Tackle, reports that surf anglers have been seeing good numbers of spanish mackerel moving inside of the sandbars, putting them within casting distance for those rigged with spoons.

Bluefish are also mixed in, and they’re feeding on the bait balls pushed onto the beach.

Bottom fishing from the sand has been good, with pompano being the main target, and Carolina-rigged cut baits are producing a variety of smaller sharks.

Speckled trout (to 6 lbs.) action has been great inshore. Anglers are having the most success with popping corks and live bait. Puppy drum, bluefish, and some large pompano round out the inshore action.