Nick, of Chasin’ Tails, reports that speckled trout fishing is getting better in the creeks as water temperatures begin to rise.

Some red drum are mixed in with the trout, with both species hitting a variety of live baits, soft plastics, and artificial shrimp lures.

The next few weeks should see a large transition in the area now that stable weather is starting to pair with rising water temperatures. The nearshore ARs and areas around Cape Lookout start to see schools of bluefish and bonito pushing in.

King mackerel will start to push into the deeper nearshore structure from way offshore.

Sea mullet action will get even better from the deep holes and basin area, and then stretching to the surf zone.

Red drum start to break off out of their large schools and will be moving around the sounds to feed, and speckled trout will be active in their current areas until warmer water temperatures begin to slow the bite.

Offshore anglers will be focused on blackfin and scattered yellowfin tuna when getting a break in the winds to make the run.

Wahoo will be picking up and adding to the offshore trolling catches. 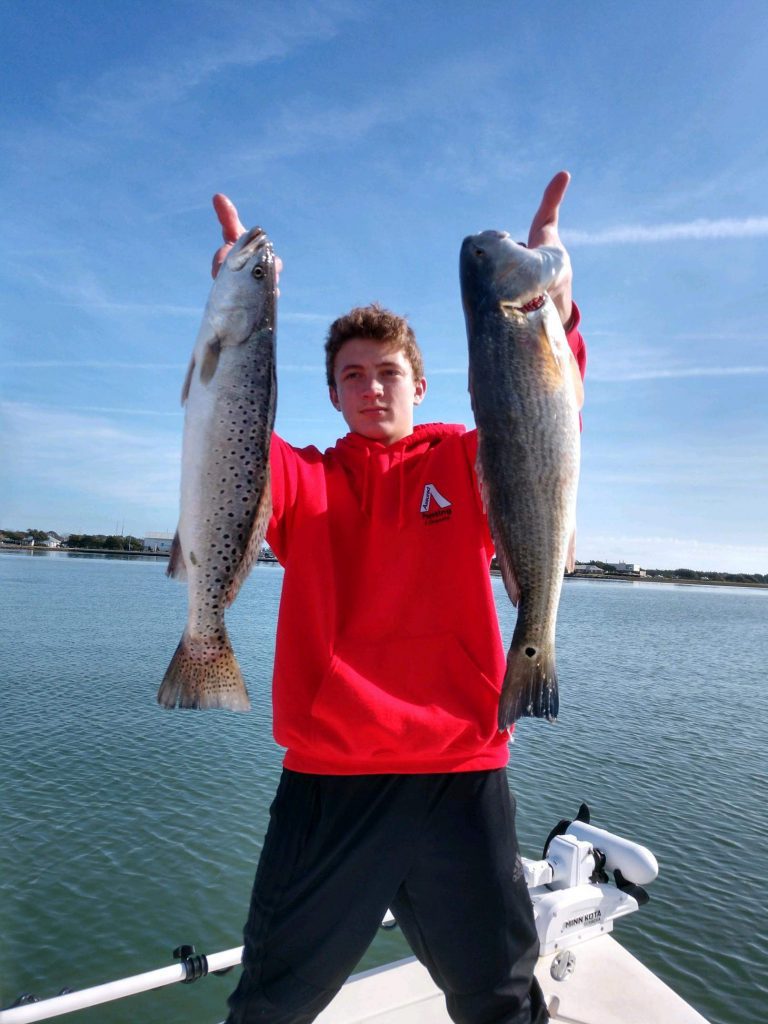 Brock Tatalovich, from Morehead City, with a trout and a redfish caught on live mud minnows in the Newport River. He was fishing with Capt. Dave Dietzler of Cape Lookout Charters.

Joe, of Carolina Traditions Guide Co., reports that sea mullet fishing has been the most consistent bite over the past few trips. Sam’s Gitter or speck rigs tipped with fresh cut bait are working great when jigged on edges of holes from 15-60’.

Redfish are schooled in the shallow back bays and flats. The bite has been a little tough but rewarding when finding a willing school. The reds are currently feeding on small crabs. Anglers are having success with smaller shrimp and paddle-tail baits slowly rolled along the bottom with long (3-10 second) pauses.

Speckled trout are holding in some of the deeper edges of these same inshore bays and flats. Topwater baits are starting to get strikes, but the similar shrimp and swimbait imitations are producing more consistent action.

A few flounder are starting to show up in these same areas (catch and release) and being caught as bycatch while targeting redfish and trout.

Bluefish are starting to show up along the beaches and nearshore areas, and these schools will get more prevalent with the arrival of baitfish and warming water temperatures.

Anglers fishing nearshore structure are starting to see an influx of smaller king mackerel while trolling. These smaller kings are great fun while using lightweight spinning and trolling setups and are favored by anglers looking to keep and eat their catches.

Chris, of Mount Maker Charters, reports that inshore anglers are catching good numbers of redfish. These schools are staged up in shallow creeks off the rivers and along the ICW. Soft plastics have been the top producing baits, with slow presentations being important.

Speckled trout are being caught in these same areas, with soft plastics also being very productive.

Nearshore trips are finding solid numbers of black sea bass from 60’ and deeper. Both Gulp on jig heads and bottom-rigged baits are getting strikes.

A few gray trout are beginning to push onto the nearshore reefs alongside the black drum.

Good numbers of sea mullet are being caught nearshore and into the Beaufort Inlet. The two-hook setups (such as spec rigs and Sam’s Gitter rigs) are working great when tipped with shrimp.

Justin, of Breakday Charters, reports that speckled trout fishing has been picking up, with schools moving in from the ocean and pushing out of creeks. A variety of soft plastics, popping cork setups, and topwater plugs are getting strikes.

Red drum are breaking up out of their winter-time schools in search of crabs. Target these groups in marsh channels and shallow bays with gold spoons, topwater plugs, and light-rigged soft plastics.

Gray trout are moving into deeper holes in the sound and nearshore structure. Target them by jigging 1.5 oz. bucktails and casting jigs.

Bonito are showing up and can be caught by trolling larger Clarkspoons, Drone spoons, and Yo-Zuri diving plugs. The favorite tactic is to target the surface-feeding schools by casting glass minnow style jigs.

False albacore and bluefish will also be mixed in with the bonito as they attack bait off the beaches.

Going later in the month, look to see the initial wave of spanish mackerel arrive. Anglers always look forward to this first push as they tend to be larger specimens than what follows.

Though it is still early, cobia could always show up in the area anytime around the end of April and into May. 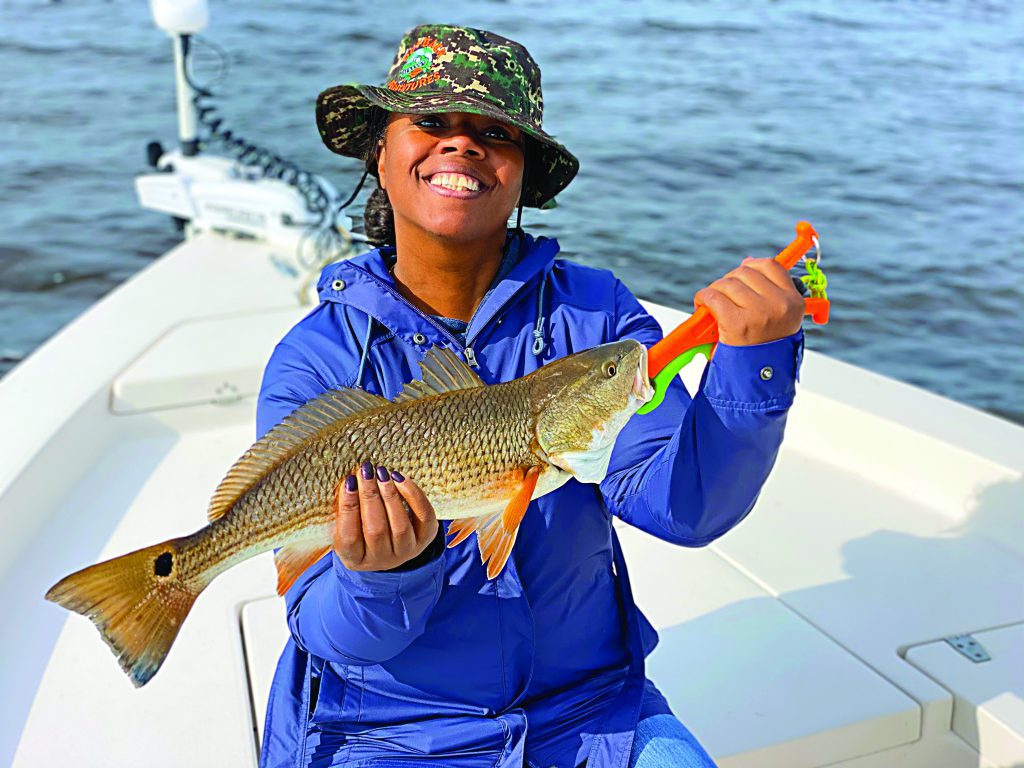 Seron Gray with a slot redfish caught using a soft plastic in a shallow-water bay. She was fishing with Capt. Chris Kimrey of Mount Maker Charters out of Atlantic Beach.

Joey, of Dancin’ Outlaw, reports that weather windows have been small with all the recent winds. As April goes along, there tends to be more of a stable weather pattern to make the run offshore comfortable.

Gulf Stream trips are targeting blackfin tuna and wahoo that hold in the region during these early season months.

Anglers also hope that yellowfin tuna make a strong showing as they did last year.

Skates and sharks are still around, and just about any bait fished along the bottom will get their attention.

Bluefish should be showing up anytime over the next week or two, with most seasons seeing runs in early April.

Spanish mackerel could also make a showing around the end of the month, if water temperatures can make a jump into the upper 60s.