Spencer, of Chasin’ Tails, reports that speckled trout action has been really good throughout the area. There has been a great bite in the late evenings into the overnight hours in the backs of mainland creeks. These groups of trout are moving into holes around skinny water to feed on bait that is staged up.

As the sun rises, these fish move onto the nearby flats with the bait. Suspending MirrOlure MR-27s are a great lure for the shallow creeks, as they allow anglers to fish slow and keep baits in the strike zone.

Popping cork setups also continue to be extremely successful. Recently, it seems that the fish respond well to the popping sound, and any mixes of jerk shads or soft plastic shrimp are enticing strikes.

There are some good schools of bait holding in the backs of these creeks. It is important that anglers look for bait when targeting trout during the colder months.

These creeks are also holding scattered, smaller red drum that will hit the same artificial baits. Some of the larger (upper-slot to over-slot) drum are being caught back in the Haystacks area.

Some giant bluefin tuna are being spotted in the 10-15 mile range.

King mackerel fishing has been slowing down a lot with the lower ocean temperatures. Most of the action has been from anglers making a run out to the east side of Cape Lookout.

Trips out to the Gulf Stream are producing blackfin tuna and wahoo. Both are falling for skirted ballyhoo, with the occasional strike from a wahoo on high-speed lures.

During the coolest of winter months, look for the smaller redfish to remain back in creeks and larger (slot to over-slot) reds to be pushing around in large groups on marsh flats.

Speckled trout will continue to be staged up in the backs of creeks to weather out the cold. The use of slow-falling MR-18s will help anglers keep baits in the strike zone. During these months, it is important to look for positive conditions. Little things like tide swings and moon phases can easily affect the bite from day to day. 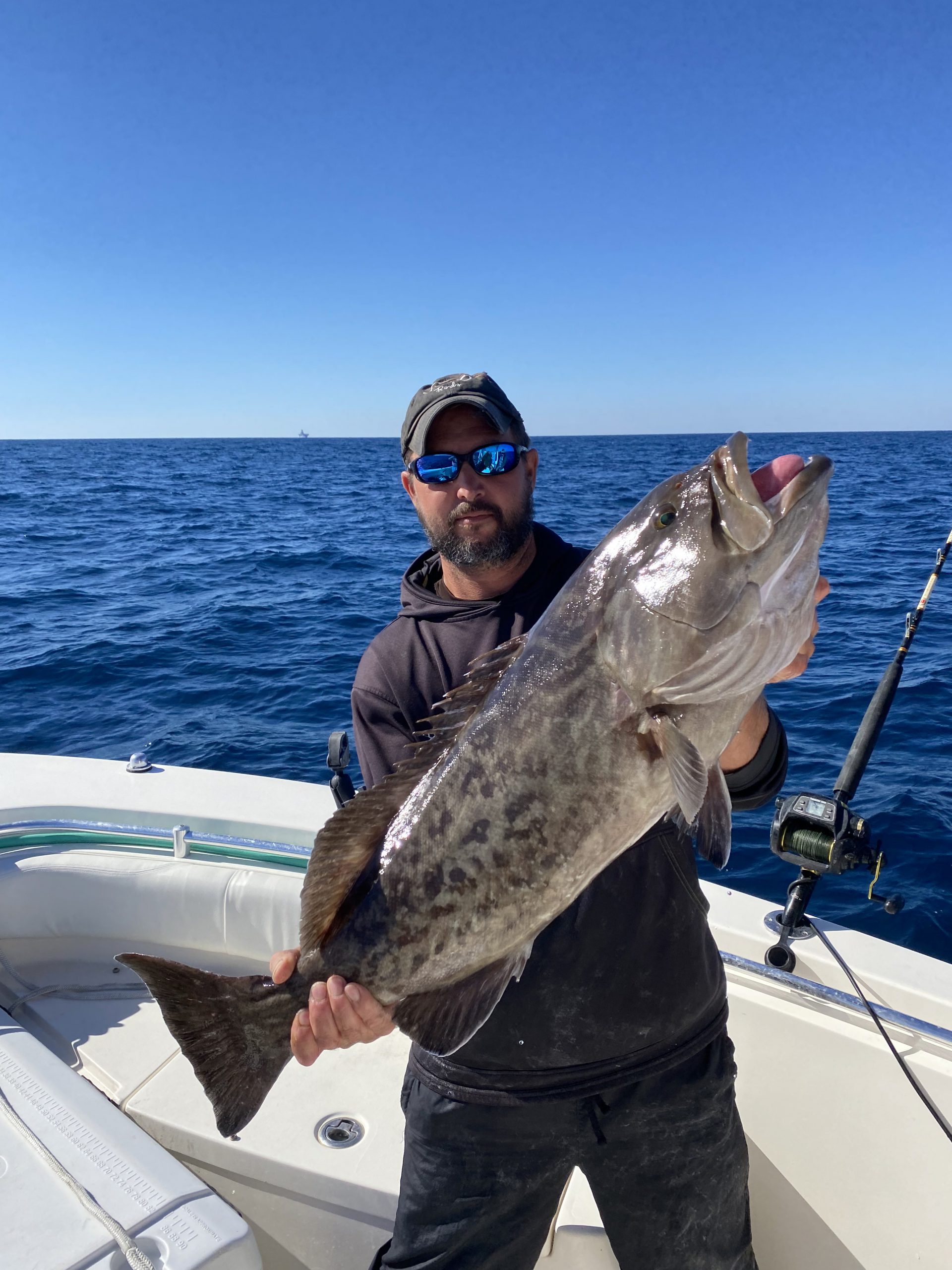 Capt. Chris Falcone, of Spooled Rotten Charters, with a gag grouper brought up in 90′ of water off of Atlantic Beach using a dead Boston mackerel.

Joe, of Carolina Traditions Guide Co., reports that speckled trout continue to be the target species as we colder weather moves in. Look for schools of trout to be holding in the deeper creeks and smaller deep bays throughout the marshes.

Slot and over-slot puppy drum are moving into a similar pattern. During the winter, they push into the backs of mainland creeks where they will stage up over the shallow mud flats. Anglers can also find these reds around points and high tide flow areas in the sound.

Anglers fishing from deeper holes near the inlets out to the surf and nearshore wrecks and ledges will continue to catch sea mullet, gray trout, and mixed pufferfish.

The shrimp boats off the beach should continue to fish into early January, and those boats mixed with the presence of large-sized shad will keep some of the bigger predatory fish (including trophy-sized red drum) holding along ledges in the 15-30’ range.

Chris, of Mount Maker Charters, reports that inshore anglers are finding that speckled trout, red drum, sheepshead, and black drum are all hitting live shrimp fished in area creeks. Anglers using MirrOlures and soft plastics are having success in these same creeks catching redfish and trout.

Nearshore anglers are finding false albacore and bluefish to be plentiful along the beaches while casting jigs and using fly tackle.

The occasional school of trophy class red drum are being found around the Cape Lookout shoals and up the eastern shores (north of the Lighthouse).

Offshore bottom fishing and king mackerel action has been steady, but not as strong as usual for this time of year. The windy and inconsistent weather patterns have had a huge effect on both fisheries.

Days with nice weather windows are seeing the commercial fleet headed out for bluefin tuna.

Going into the coldest period (from December to March), look for most fishing action off the beach to be centered around the bottom fish species that are in season, as they stay stacked up on structure.

Inshore anglers will find action while working the backwaters and creeks with soft plastics. 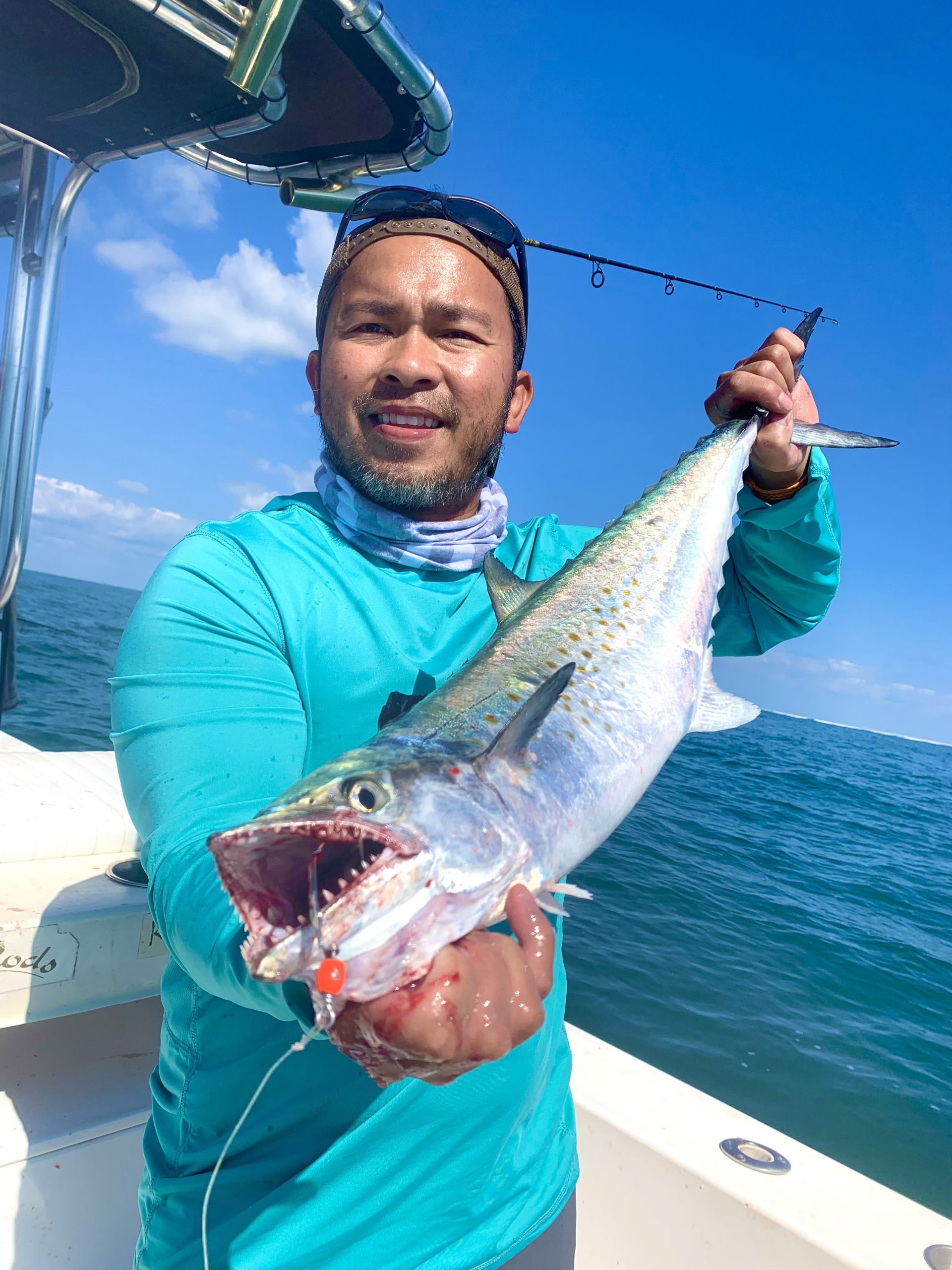 Lae Vongsavanh with a 5 lb. spanish caught off of the Cape Lookout shoals on a weighted Clarkspoon. He was fishing with Capt. Noah Lynk of Noah’s Ark Fishing Charters.

Justin, of Breakday Charters, reports that red drum and speckled trout fishing has been strong in the waters along the ICW.

Speckled trout have been pushed up into the mainland creeks where they will holdover through the winter. With water temperatures still having these fish very active, almost all the action has been with soft plastic Vudu shrimp. As water temperatures cool more over the next few months, anglers will have better success using MirrOlure suspending lures. The key during winter months will be to fish slow to entice the schools of sluggish trout to strike a bait put out in front of them.

Red drum are up in the marshes throughout the sound. Wintertime patterns will see these fish gather into large schools and push into the shallow bays to feed.

Off the beach, the big talk has been bluefin tuna moving into Onslow Bay and over on the east side of Cape Lookout. This migration moving into the area provides a great opportunity for these giant fish and possibly the catch of a lifetime within sight of land.