Nick, of Chasin’ Tails, reports that inshore action has been great for both red drum and speckled trout. Popping corks rigged with soft plastics or live shrimp have been the overall top producing setup. Anglers on the water both early and late are getting strikes on a variety of topwater plugs while working flats and up against grass banks.

Some good-sized sheepshead are being caught around the local bridges and deeper docks. Live fiddler crabs and sea urchins are producing most of the action.

Nearshore anglers are catching good numbers of spanish mackerel from the inlets out to nearshore ARs. Trolling with Clarkspoons tends to be productive, but keep an eye out for surface-feeding fish. Casting Big Nic Spanish Candies and Beachbum Gunslinger jigs at these busting fish will produce some strikes. At the nearshore wrecks, larger spanish mackerel (up to 6 lbs.) are hitting live baits.

King mackerel are scattered from the beaches out to 20 miles, with most fish holding deeper. Live bait rigs have been best for the king bite.

Bottom fishing efforts are being rewarded with grouper, triggerfish, and big beeliners.

Mahi are working their way closer as it gets into the heat of summer. Some smaller fish are being caught around the 14 buoy, so anglers running out should watch for the right conditions versus just heading to a certain spot. 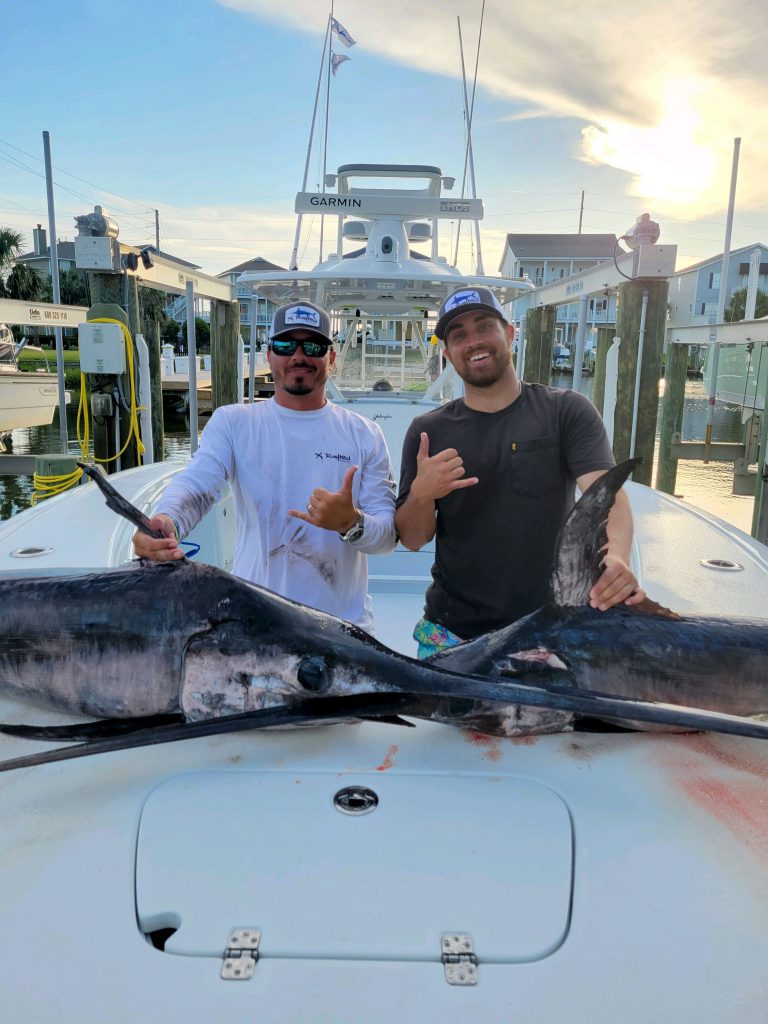 Capt. Mike “Slick” Dupree (left) and Capt. Collin Richardson with a pair of swordfish caught aboard “Smoke Show” in 2000+’ of water. They were daytime swordfishing out of Beaufort Inlet.

Joe, of Carolina Traditions Guide Co., reports that sight-fishing for red drum has been great. A phenomenal weather pattern brought conditions together for successful wade fishing and casting topwaters at roaming schools. As the bait (shrimp) continue to move out from the backs of creeks, anglers expect this bite to only improve.

Some nice-sized speckled trout are being caught on topwater plugs both early and late, and there has been a good showing of flounder being caught as simple by-catch while targeting the other inshore species.

For anglers fishing sound waters, a couple “old” red drum are popping up as a welcome surprise for topwater anglers. This bite picks up throughout the summer as the fish move inshore from off the beach.

Nearshore fishing has been solid, with spanish mackerel hanging around the nearshore wrecks as they work on the bait flushing out from the inlet. A good number of king mackerel have moved closer to shore and are feeding alongside the spanish.

Barracuda and amberjack action is heating up, as these species are pushing in over these same structures and striking at live baits.

Chris, of Mount Maker Charters, reports that offshore and nearshore action has been good as long as weather has allowed anglers to get off the beach.

Bottom fishing in the 75-100’ range has been producing gag groupers, triggerfish, vermilion snapper, keeper black sea bass, amberjacks, cobia, and mixed bottom feeders. Both dead and live baits are producing most of the strikes, but under the right circumstances jigs and poppers are working well.

Nearshore trips are finding a great spanish mackerel bite while both trolling and casting spoons. Some of the jumbo-sized spanish and king mackerel are moving in over the nearshore reefs and rocks. Live finger mullet and smaller menhaden are great ways to get in on this action.

Inshore, red drum are staged up in the creeks and around docks in the ICW. Both live and dead baits are getting strikes in these areas.

Speckled trout are schooled up in these same areas and are feeding on live baits.

Black drum and sheepshead are holding around structures such as docks and oysters. Live shrimp has been the best bait for both species.

Justin, of Breakday Charters, reports that inshore action has been hot for slot-sized red drum. All the baitfish that are now pushed inshore have the action fired up from the inlets and into the marshes. Trips are catching double-digits of reds while fishing back in channels and on flats in the marshes.

Some days are also mixing in limits of speckled trout in these same areas. For both inshore species, Vudu shrimp have been the hot ticket.

Off the beach, anglers are landing jumbo spanish mackerel (up to 7 lbs.) around the reefs with live bait. Casting jigs are also great when finding schools breaking the surface under bait.

Kings are scattered from the nearshore wrecks out to the 25 mile range.

Mahi fishing has been really good, with schools being found while trolling and bailing from under floating debris or over offshore structure. 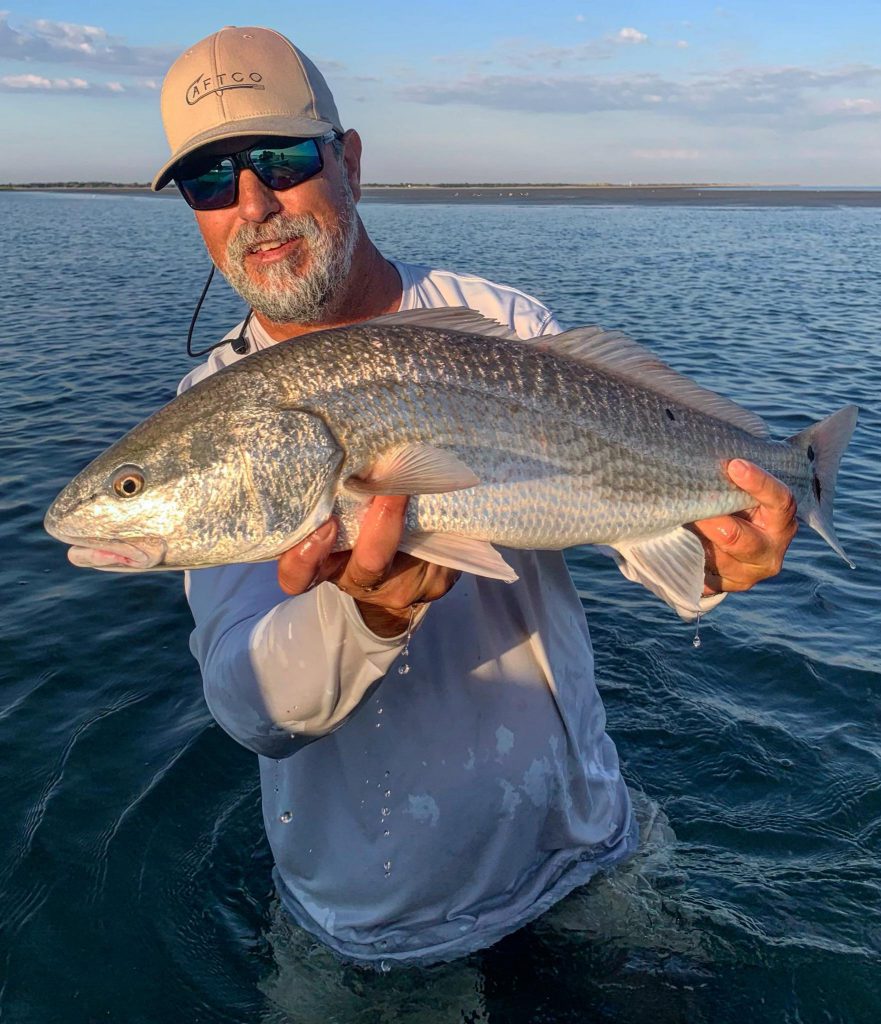 Wayne Justice with a topwater red drum pulled from a school while wading some flats in the early morning. He was fishing with Capt. Joe Tunstall of Carolina Traditions Guide Co.

Joey, of Dancin’ Outlaw, reports that mahi have been making their way inside of the break as they get into a summertime pattern. The large schools are breaking up as they search for bait and conditions that provide cover or protection (grass and debris). Generally, once finding the fish, the bite is wide open.

Wayne, of Oceanana Pier, reports that bottom fishing has been steady, with anglers out in the mornings and evenings having the most success.

Black drum (up to 8 lbs.) and sheepshead are being caught with fresh shrimp, and speckled trout (up to 19”) are feeding on live shrimp. Some red drum are mixed in the bottom fishing action at night.