Matt, of Chasin’ Tails, reports that inshore anglers are finding good numbers of redfish as the reds get more active with bait moving in.

Sheepshead, gray trout, and black drum are holding around structured areas such as the Port Wall and area bridge pilings.

Speckled trout are being caught from deeper mainland creeks.

Anglers trolling off the beach have been landing plenty of spanish mackerel, bluefish, and some bonito.

King mackerel are working their way nearshore and will be even more common as water temperatures rise.

Cobia are around, and it is best to always be prepared with a bucktail when fishing off the beach, in case a cobia (or two or three) is spotted around the bait balls.

Offshore trips are finding solid blackfin and yellowfin tuna action mixing in with the arrival of mahi.

Bottom fishing the deeper ledges and rocks is producing some good-sized gag grouper. 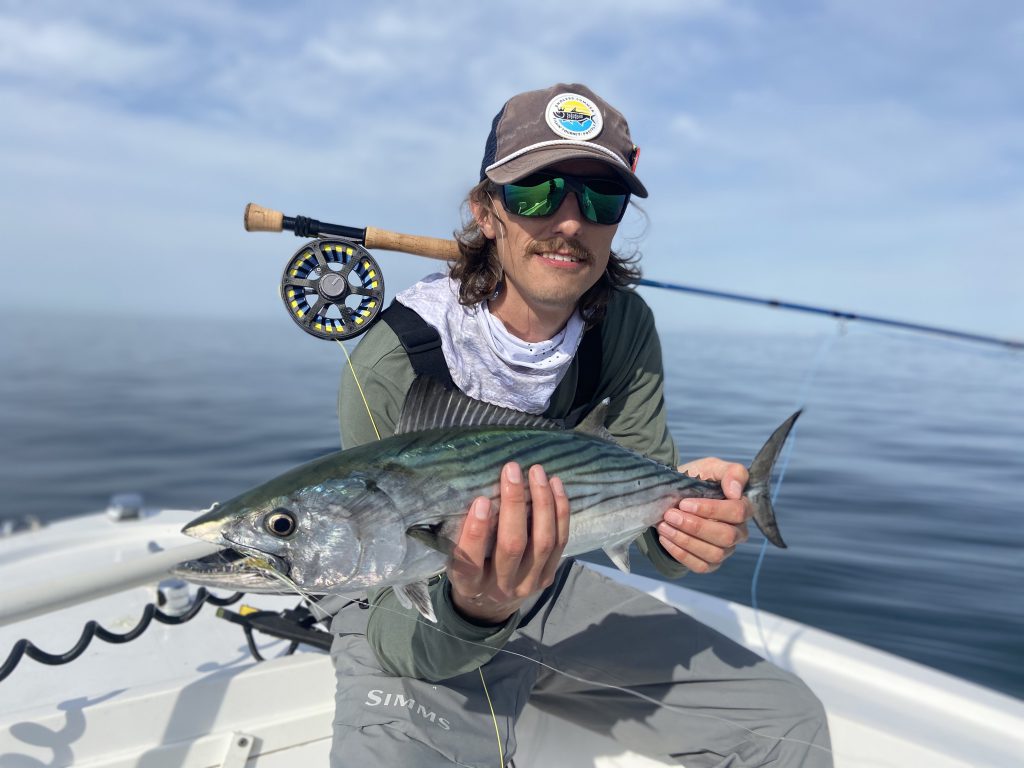 Dylan, from NY, with his first bonito caught on the fly. He was fishing off Atlantic Beach with Capt. Andy Bates of Captain Bates Fishing Charters.

Joe, of Carolina Traditions Guide Co., reports that inshore anglers have found that some of the bottom fishing action on sea mullet has moved into deeper waters around the inlet.

There are some large pufferfish and good numbers of croakers still around Radio Island and Fort Macon.

Red drum have broken up and are becoming more mobile. Target these groups in back bays and around oyster rocks with live mullet or mud minnows. Anglers have been having a lot of recent success with spinnerbaits cast along deeper marsh edges.

Sheepshead are being caught around inshore structures, and they should be joined by incoming black drum any day.

Nearshore ARs are holding some large gray trout that are feeding on cut mullet or menhaden. Z-Man soft plastics paired with heavier 1-1.5 oz. jig heads also work around this structure.

Spanish mackerel and bluefish are schooled up along the beaches out to the shoals. Anglers have been successful by casting Gunslinger metal jigs at feeding fish or by trolling Clarkspoons when the spanish aren’t on the surface.

Some bonito are hanging around for anglers on the water in the early mornings.

King mackerel action is picking up in the 8-15 mile range.

Good numbers of spring kings are holding in the 65-90’ range for anglers trolling spoons and live bait.

Amberjack have moved into this zone and are hitting live baits, vertical jigs, and topwaters over ARs and hard bottoms.

Colder temperatures have slowed the cobia action, with the few being caught coming from around Cape Lookout by bait anglers. 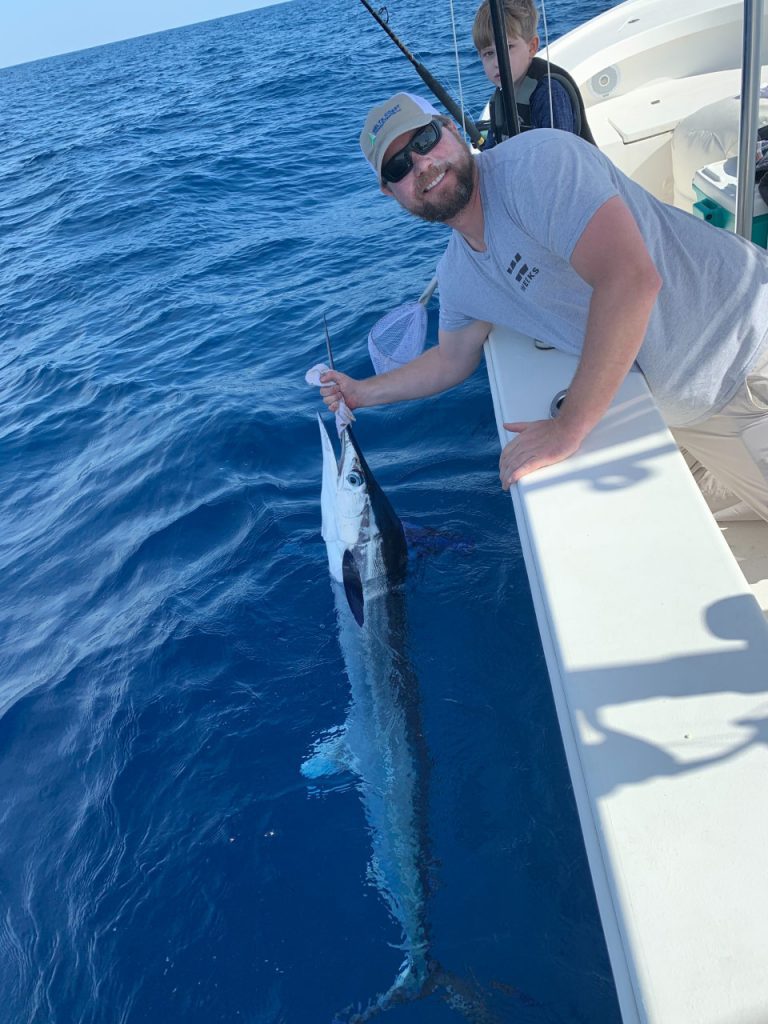 Eric Rathstrum with a white marlin caught just offshore of the Big Rock on a green/chartreuse skirted ballyhoo. He was fishing with Matt Munns and his son, Nate Munns.

Justin, of Breakday Charters, reports that red drum are being found everywhere from areas around the ICW up into the Neuse River region. Topwater plugs are getting a lot of action, as well as cut mullet when conditions don’t cooperate. Target some of the deeper, wind-blown grass banks.

Nearshore trips are finding good spanish mackerel action from Atlantic Beach up to the Cape.

Schools of bonita and bluefish are mixed in for anglers pulling Clarkspoons or casting jigs to feeding frenzies.

King mackerel are scattered in the 60’ range, and they’re hitting live or dead baits.

Cobia have been holding around some of these deeper structured areas.

Mahi are pushing in from offshore. This bite has only just started, and the numbers will certainly get better in the coming weeks.

Joey, of Dancin’ Outlaw, reports that some big blue marlin have started to show up in trolling spreads offshore around the good temperature breaks.

Good-sized yellowfin tuna (up to 40 lbs.) are hitting skirted ballyhoo.

Mahi are moving into the region. Recent winds have put a damper on the amount of fishable days, but look for calming conditions to reform grass lines and provide good catches in both numbers and sizes.

Bottom fishing is producing plenty of triggerfish and beeliners.

Terry, of Oceanana Pier, reports that bottom fishing anglers are catching good numbers of hogfish, croakers, and smaller bluefish on shrimp or squid.

Spanish mackerel fishing has really picked up, with both good numbers and sizes of fish hitting metal casting jigs.