Red drum are still moving between the inlet areas onto the flats, and they’re basically searching for a combination of food and slight upticks in water temperature.

Moving into March, look for sheepshead and some gray trout to show up in structured holes and around bridge pilings, and the first run of smaller bluefish tends to come straight into the inlets to feed inshore.

Surf fishing has been a bit slow, but a small water temperature change should see the arrival of blow fish, sea mullet, and bluefish.

Offshore fishing has been very bottom fish dependent, with most of the recent catches being triggerfish, black sea bass, or beeliners.

Anglers looking for Gulf Stream action have their fingers crossed for good weather that could push in wahoo, blackfin, and yellowfin tuna. 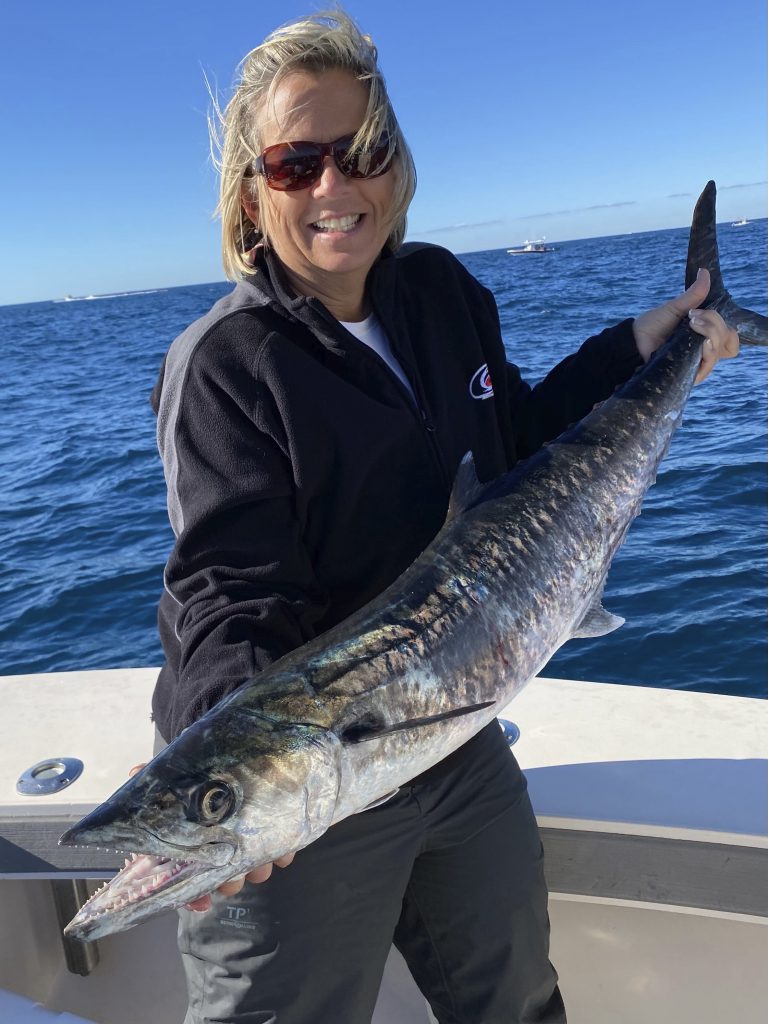 Sarah Weinhold displaying a king that was hooked on a live bluefish while fishing the Cape Lookout shoals. She was fishing with Capt. Chirs Kimrey of Mount Maker Charters.

Joe, of Carolina Traditions Guide Company, reports that the first nearshore action of March begins with bluefish starting to show up from the area’s inlet to areas around the shoals. There will be a nice (3-4 lb.) class of fish in this initial run.

Gray trout start to move in over nearshore wrecks for anglers jigging.

False albacore will be arriving, and not far behind can be bonito. The bonito usually show up around April, but the right warmer weather conditions and little rain can push them in early.

Inshore anglers will find speckled trout getting more active with warming water temperatures. These trout will be moving out of their wintertime holdovers and staging up in marshes and out towards the inlets as they head north.

Sea mullet and pufferfish will be coming into the inlets and moving into deeper holes from the inlet back into the channels.

Red drum fishing has been solid (even in February) and should stay active going into March. Look for the schools to be held up in the backs of muddy bays and on complex grass flats. The only thing to dampen efforts is the grass beginning to flush out of inshore areas as water temperatures rise.

Anglers will also start to see good red drum action on the oceanside, with some of the larger slot to upper-slot fish working the beaches.

Chris, of Mount Maker Charters, reports that the colder winter temperatures have many of the typical fisheries shut down in the area.

Red drum have been the one strong point, with fish schooled up from out in the surf zone to back into shallow water creeks. The reds are holding in larger schools where targeting them with slow-moving soft plastic baits has been the most effective.

Nearshore anglers are looking forward to rising water temperatures to push bluefish and possibly early season bonito into the area around the end of March.

Inshore fishing will remain the best action, though, with good numbers of red drum being found around warm mud flats and inshore structure. Areas such as rocks, docks, oysters, and bridges are all good places to start dropping Carolina-rigged crabs, shrimp, or cut baits. When fishing the flats, soft plastics are best, as the approach must be stealthy to keep from spooking the schools.

Black drum are holding in all these same areas, with shellfish being the most productive baits.

Speckled trout will start to be more prevalent as temperatures rise. Targeting the marshes and the same holes you would in the fall is a good spring tactic. Look for action with MirrOlures, soft plastics, and mud minnows (when they become more available).

Going into the end of the month, water temperatures in the low to mid-60s may bring in schools of great-eating bonito. Target these schools by trolling deep-diver Yo-Zuri plugs or sight-casting “Jig or Cast” Breakday glass minnow jigs. 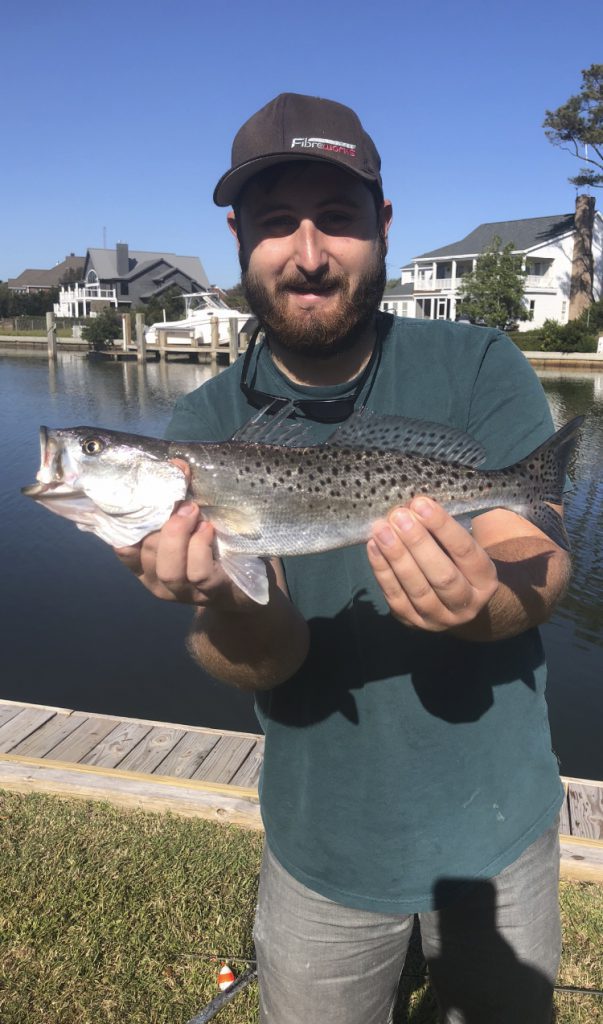 Will Cates, of Atlantic Beach, with a trout caught on a live shrimp in Spooners Creek in Morehead City.

Joey, of Dancin’ Outlaw, reports that anglers look forward to weather windows opening up as March moves in. March is when tuna action starts picking up, with both yellowfin and blackfin tuna hitting the docks.

Wahoo are just about a year-round fishery for the Morehead area. As more anglers make trips to the Stream, the reported catch numbers will rise.

If the weather does stay cooler, it’s a good idea to target the bottom fishing that isn’t as affected by temperatures.

Wayne, of Oceanana Pier, reports that anglers look forward to action once the pier opens on March 11. Bottom fishing will be the main method, with anglers looking for blow toads and black drum to be feeding on shrimp.

A few speckled trout holding over in the surf zone may be caught with the same bottom-rigged shrimp.

Once water temperatures hit the mid-50s, the bluefish begin to arrive. This first push of blues tends to feed best more on bottom-rigged baits than casting jigs.