Nick, of Chasin’ Tails, reports that speckled trout and red drum action has been very good in the creeks, as fish are still holding over and waiting for water temperatures to rise.

Bottom fishing in deeper holes around the Port and inlet has been producing a mix of sea mullet and gray trout. Bluefish, red drum, and black drum are also mixed in the action coming from these deeper holes.

Nearshore action has picked up quite a bit now that bait is pushing closer to the beachfronts. Anglers are reporting a mix of bonito, spanish mackerel, and bluefish while trolling or casting jigs at surface-feeding schools.

Gray trout are holding around the bottom structure for anglers dropping bottom-rigged baits and jigs.

Offshore trolling trips have had a lot of success with yellowfin and blackfin tuna, and some large wahoo are also being brought in.

The mahi are scattered in the counts, but going into May, look for the numbers to rise steadily as more fish arrive in the area.

Some king mackerel are slowly looking their way nearshore, with most action still out around the Big Rock and 14 Buoy areas. 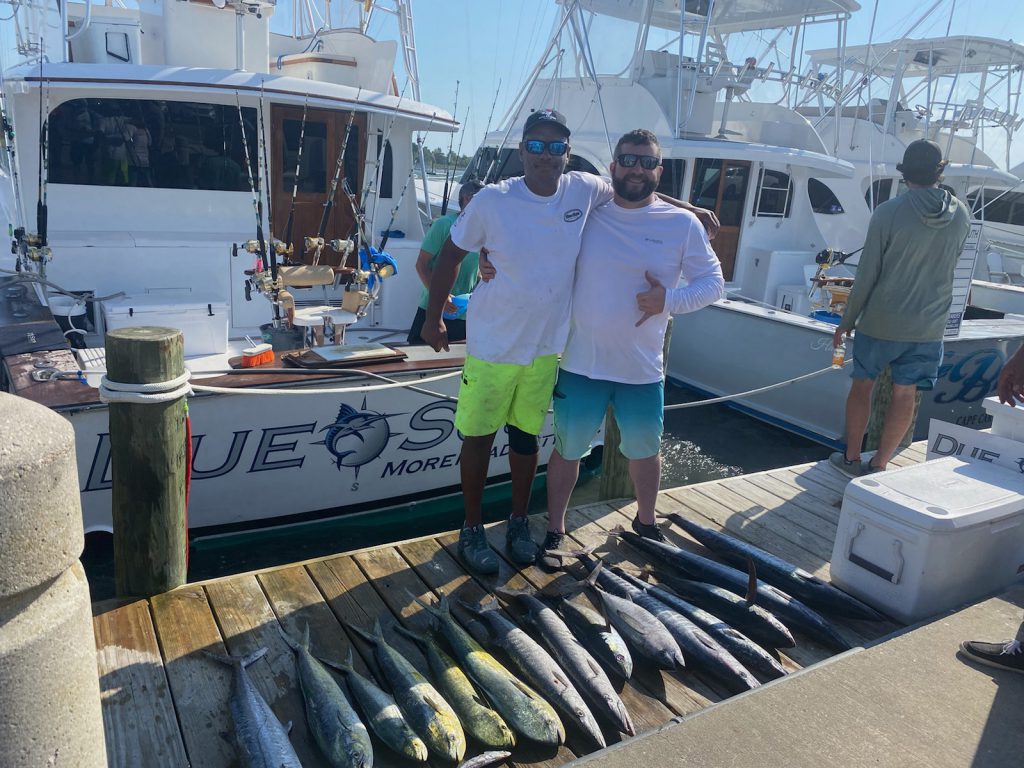 Shane Easter and Capt. Mark Chambers with a spread of king mackerel, wahoo, mahi, blackfin tuna, and barracuda. They were fishing out of Morehead City.

Joe, of Carolina Traditions Guide Co., reports that red drum fishing has been good, with the fish now breaking up out of their larger wintertime schools. These smaller groups are staging up around deeper structure and backwater channels. Gulp soft plastics are great for scouting out the fish, but on cooler days, a change in tactics to cut shrimp on 1/4 oz. jig heads can help in getting action. With live shrimp and mullet showing up more, the redfish action should get even better over the next few weeks.

Speckled trout fishing has been spotty, with a few good-sized fish being caught with topwater plugs worked around deep grass banks and marsh flats.

Sea mullet fishing inshore waters has been really strong, with the schools holding up in many of the deeper holes. Some black drum are mixed in the deeper areas, and the action should get even better as more fish arrive over the next few weeks.

Some good-sized gray trout (up to 6 lbs.) are being caught from deeper holes inshore out to the nearshore ARs.

Bonito are around the beachfronts and out to nearshore wrecks. This season has been more commonplace to find the fish holding a bit deeper. Mixed in the nearshore and inlet areas are good numbers of false albacore.

Anglers should keep a look out for schools of over-slot to citation-sized red drum around the shoals and nearshore wrecks.

Chris, of Mount Maker Charters, reports that nearshore fishing has been very good now that warmer water temperatures are bringing bait up onto the beachfronts.

Bottom fishing at the nearshore structures has been producing gray trout and good numbers of sea mullet.

A few schools of bonito are holding in this same area for anglers casting jigs and trolling spoons.

Over the next few weeks, anglers look to target shallow water grouper now that the season is opening. These fish will be staged up over rocks, wrecks, and ledges in the 60-120’ range.

A variety of other bottom species will be mixed in for those bait fishing.

Dolphin fishing picks up going into the next few weeks. Look for some good weather windows to make the run out to target these fish pushing up from the south. 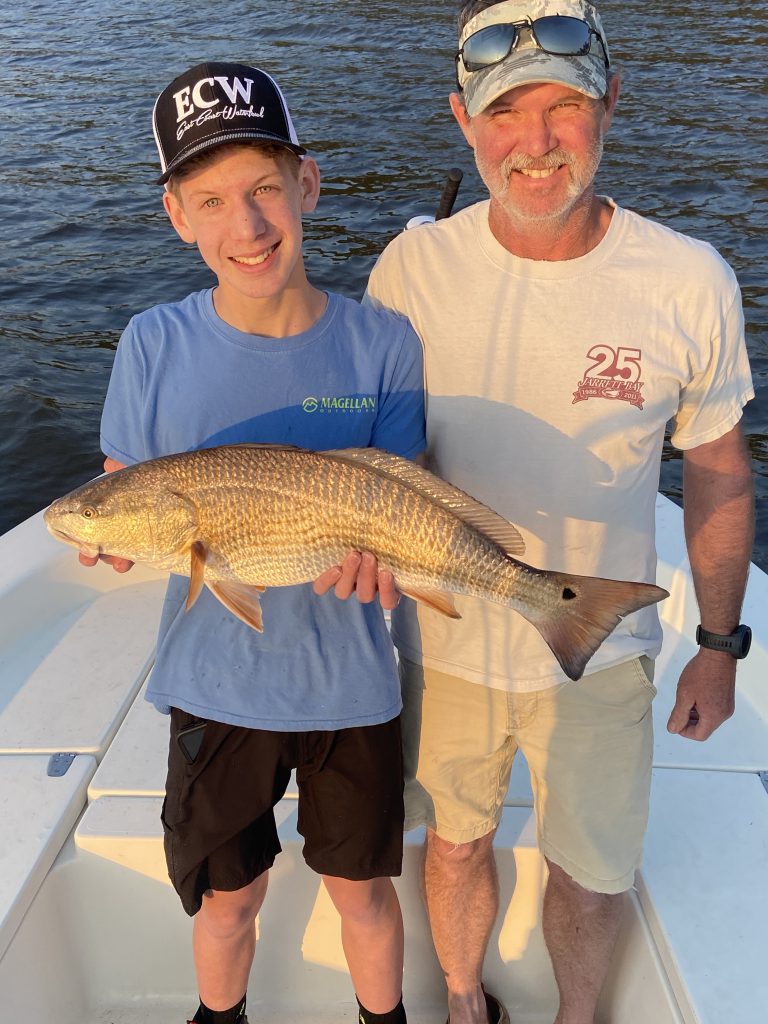 John Coley (left) with an 8 lb. redfish that fell for a popping cork rig. He was fishing out of Morehead City with Capt. Griffee of On-Deck Charters.

Justin, of Breakday Charters, reports that spanish mackerel have shown up in good numbers for anglers trolling Clarkspoons and casting jigs.

Schools of bonito are mixed in along the beachfront. With the weather patterns remaining on the cooler side, these schools may stick around for another couple weeks.

Good-sized gray trout are holding down on the structure. Dropping or throwing Breakday jigs has both been successful in getting strikes.

Cobia start to move into the area over the next month.

Grouper season is opening up, and the grouper can be found around structure in the 100’ depth range.

Offshore trips have been seeing some great yellowfin tuna action and are also looking forward to adding mahi to the numbers in the next few weeks.

Joey, of Dancin’ Outlaw, reports that anglers have been very pleased with the amount of yellowfin tuna in the area this spring. The numbers so far have looked the best in a long while.

Blackfin tuna are a staple this time of year, and they are mixed in with the trolling action.

Wahoo have also been quite a bonus. Typically spring just sees a few fish mixed in, but this season’s numbers are up.

Mahi are starting to mix into the daily catches. May is one of the best months to target them, as the first waves push through on their northern migration.

Kelly, of Oceanana Pier, reports that bottom fishing has been getting better, with more anglers taking advantage of warmer weather.

Sea mullet and spot are both being caught with shrimp and sand fleas.

A few pufferfish are mixed in the numbers, but they tend to move on as water temperatures get warmer.

Bluefish have arrived on the beachfront and will hit bait on bottom rigs and casting jigs.