Spencer, of Chasin’ Tails, reports that speckled trout have started showing up in areas from creek mouths to mud flats throughout the sound. With seasonal changes in progress, fishing the cold snaps has been key to finding better action. Anglers should look for water temperatures to dip into the upper 60s for the action to really pickup to the typical late fall fishing. In the meantime, target the early and late hours to avoid the slow action in the afternoons.

Red drum fishing has been more consistent, as the reds follow all the moving bait into area creeks. A lot of these redfish are hitting topwater plugs, and some are even hitting MirrOlures and similar sub-surface lures. For both the reds and trout, though, live shrimp has been working best.

Anglers fishing deeper holes in and around the port are doing well while bottom fishing. Good numbers of gray trout, sea mullet, and croakers are all mixed in (with a few spot).

Surf anglers have been finding large numbers of spanish mackerel and bluefish off the Atlantic Beach and Fort Macon beaches and over to Shakleford Banks. Lately it has been gold casting spoons that have been the most productive.

Nearshore action has been focused around the good numbers of eater-sized and citation spanish mackerel off the beach. A mix of trolling spoons, casting jigs, and live bait is producing strikes.

King mackerel fishing has been phenomenal, with local tournaments seeing more larger fish (to 50+ lbs.) being caught nearshore than in many years before.

Offshore anglers are catching some wahoo out around Big Rock. The action is a bit scattered in the warm water, and the best signs of this are some wahoo also being caught nearshore by anglers live bait fishing for kings.

Blackfin tuna are mixed in the offshore areas around structure. Greg Karbett with a 4 lb. speckled trout that fell for a live shrimp under a popping cork. He was fishing the Newport River with Capt. Chris Kimrey of Mount Maker Charters.

Joe, of Carolina Traditions Guide Co., reports that recent big tide swings matched with the first cold front of the season have brought along big changes.

Anglers fishing inshore waters have found incoming tide cycles to be more productive for both slot-sized red drum and speckled trout. With tons of bait moving around inshore, these fish are very active, and this has led to great topwater fishing.

A mix of sea mullet, spot, and gray trout are pushing into the deeper interior channels throughout the sound. These species all typically fire up going into November as water temperatures drop just a bit more.

Nearshore fishing has been phenomenal. Lots of large spanish mackerel, bluefish, and hungry false albacore are feeding on bait balls in the area. Both anglers with casting jigs on spinning rod setups and fly-fishing anglers are finding success around these frenzies.

Some trophy red drum have been moving off the beaches over the last few weeks as they migrate through the area on their way south.

Chris, of Mount Maker Charters, reports that even with warmer than normal fall temperatures, fishing is still picking up.

Inshore anglers are finding a mixed bag of speckled trout, redfish, black drum, and sheepshead in areas along the ICW, in mainland creeks, and into the sound. Live shrimp fished under a popping cork or slip bobber has been the top setup, with soft plastics getting plenty of action as well.

Nearshore anglers have seen steady action with spanish mackerel, false albacore, and bluefish. A mix of trolling, fly fishing, and casting jigs are all having successes.

King mackerel have been holding around areas of nearshore structure. Fishing live shad, bluefish, or dead bait on king rigs have all produced strikes.

Offshore anglers are seeing the wahoo action being a bit slower than normal for October, but there are still a fair number being caught. 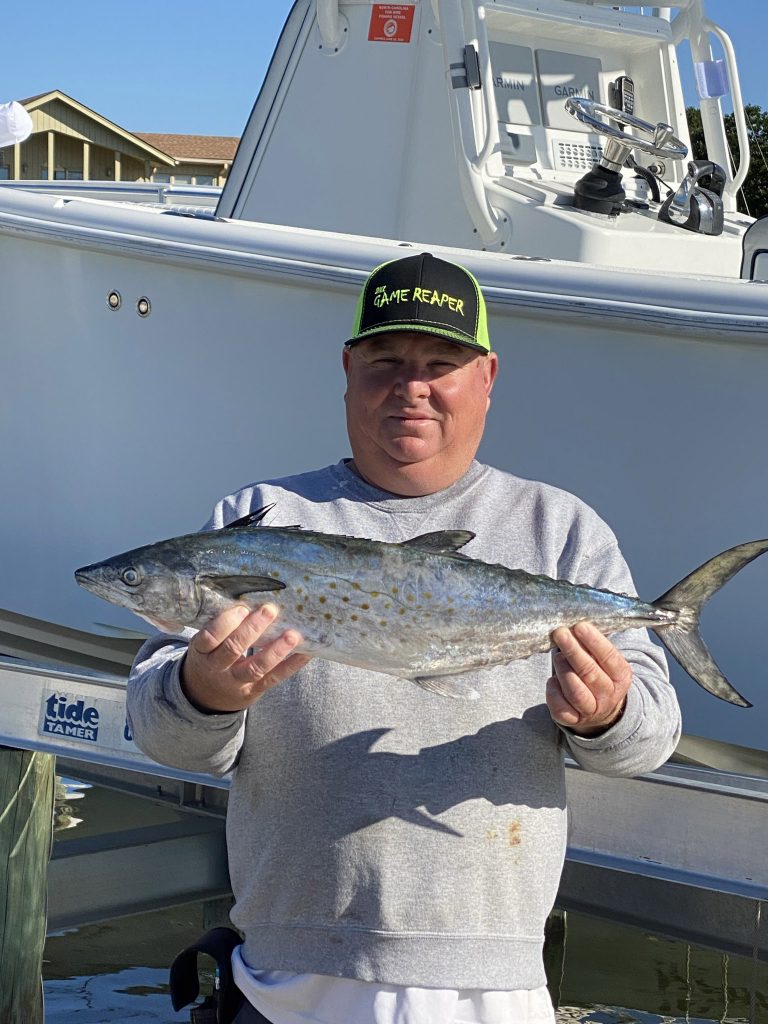 Michael Nichols with a 6.5 lb. spanish mackerel caught using a live menhaden. He was fishing out of Morehead City.

Justin, of Breakday Charters, reports that false albacore fishing has been great from the inlets to out along the area’s beaches. Anglers are having success while casting Albie Snax and Breakday Jig-or-Cast lures at the surface-feeding schools.

Schools of spanish mackerel are mixed in on this surface action. With water temperatures cooling and more cold fronts on the way, it shouldn’t be too long before many of these fish push away from the beach.

Schools of large bluefish (to 6+ lbs.) are being caught with topwater plugs fished over the shoals off Cape Lookout.

King mackerel action has been up or down. Anglers will find the best king action to push back into the 60-80’ range. Slow-trolling live baits has been best, with success also being found with cigar minnows or mullet on dead bait rigs.

Offshore trips are finding some action on blackfin tuna and wahoo on skirted ballyhoo rigs.

Inshore fishing is picking up now that the cold fronts have started to move through. Red drum are being found everywhere from the marshes out to docks and oyster banks along the ICW. Gulp soft plastics and cut baits are both getting strikes.

Speckled trout fishing is also getting better, with most action back in the marshes. Fishing live shrimp or Vudu shrimp under corks is getting action, as are Z-Man soft plastics on 3/16 oz. or 1/4 oz. jig heads.

Bri, of Oceanana Pier, reports that anglers have been seeing plenty of surface-feeding action with all the bait running along the beaches. Good catches of false albacore and large spanish mackerel are being caught by those casting jigs at the feeding frenzies.