Mickey, of Chasin’ Tails, reports that redfish action has been solid all summer long, and the fall mullet run gets these schools even more active. With the increased presence of mullet, the redfish will be found just about anywhere inshore from the marshes out to deeper holes around the inlet.

Keeper flounder season was a success for many anglers, both inshore and out on the nearshore wrecks. With live bait being a popular option over the next few weeks, expect to see some nice-sized flatfish caught (to be released).

Speckled trout are scattered around the area. Water temperatures have just started to cool, and this is a large part in seeing action pick up.

Black drum and sheepshead are staged up around inshore areas of structure, with live shrimp and crabs being most productive.

Nearshore anglers are seeing good-sized schools of spanish mackerel and false albacore off the beaches.

King mackerel are starting to move towards the beachfronts. As the schools move inshore, trolling live and skirted dead baits will produce strikes anywhere from the beach out to 10 miles.

Anglers headed out to bottom fish are finding strong grouper action in the 15+ mile range, and offshore trips are returning with good-sized dolphin and scattered wahoo.

Bottom fishing at the deeper structures has produced a mixed bag of triggerfish, grunts, beeliners, and big black sea bass. 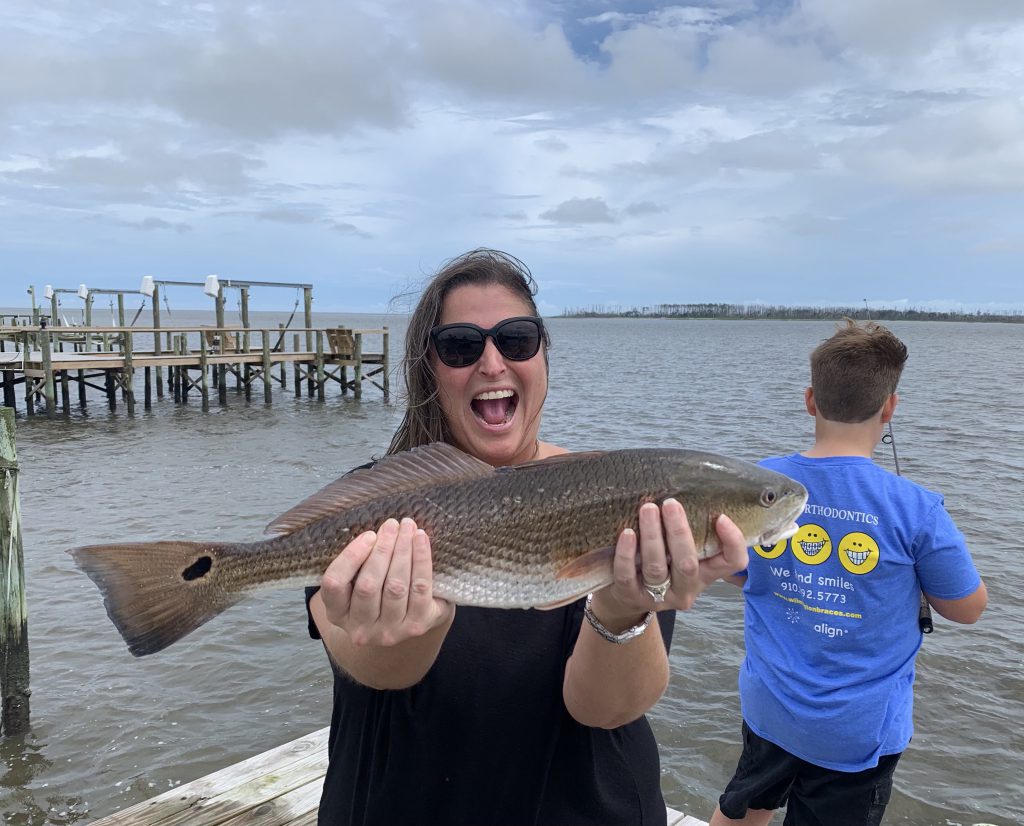 Rebecca Lawrence, of Hampstead, with a 22” red drum that fell for a swimming minnow soft plastic off a dock in Atlantic Beach.

Joe, of Carolina Traditions Guide Co., reports that the north wind cycles have started pushing large schools of bait out of the inlets as part of the yearly mullet run.

Inshore, this has led to great slot and upper-slot red drum action back in the marshes. Fishing the grass lines on flood tides has been the top producing tactic.

Speckled trout are starting to transition into their fall pattern where anglers will find schools moved into the larger bays and creeks. Similar to targeting redfish, look for the deeper grass banks that hold bait.

Deeper areas around the basin have seen sea mullet moving in over the past few weeks. The cooler weather changes (and yellow butterflies arriving) should have anglers seeing spot move into these areas soon.

The Pamlico Sound areas from Cedar Point up into the rivers are on the final stages of the trophy red drum bite, but these fish don’t just disappear overnight. Anglers will be targeting these schools as they push out of the inlets and move around the shoals and nearshore contour changes to feed on baits off the beach. This time of year, anglers should be prepared with a bucktail jig in the case of running across one of these schools.

Schools of false albacore are moving in as well, and they’re feeding on bait balls and behind shrimp trawlers. Most anglers choose to cast jigs at these feeding frenzies.

If further off the beach, anglers fishing around trawlers shouldn’t be shocked if a few blackfin tuna are in the mix. Each year seems to see a couple move in with this early fall fishing.

Chris, of Mount Maker Charters, reports that fishing is heating up as we close in on fall. A slight drop in water temperatures has the inshore fishing already heating up, with solid action on both slot and over-slot red drum.

Anglers fishing up Adams Creek into the Neuse and Pamlico sounds are still finding some bull red drum as they finish their spawn and work back into the ocean.

Deeper holes along the ICW are producing more gray and speckled trout each day. As the water continues to cool, this action only gets better. Anglers fishing live shrimp for the trout will also be finding mixed black drum and sheepshead around these structured areas.

Nearshore, the early fall run on spanish mackerel, bluefish, and false albacore is already off to a strong start.

King mackerel fishing is picking up as baitfish schools become more plentiful off the beach. Further out, anglers targeting structures in the mid-range will find action on shallow water grouper, amberjack, and a mixed bag of reef fish to pick up as fall patterns come into full swing. 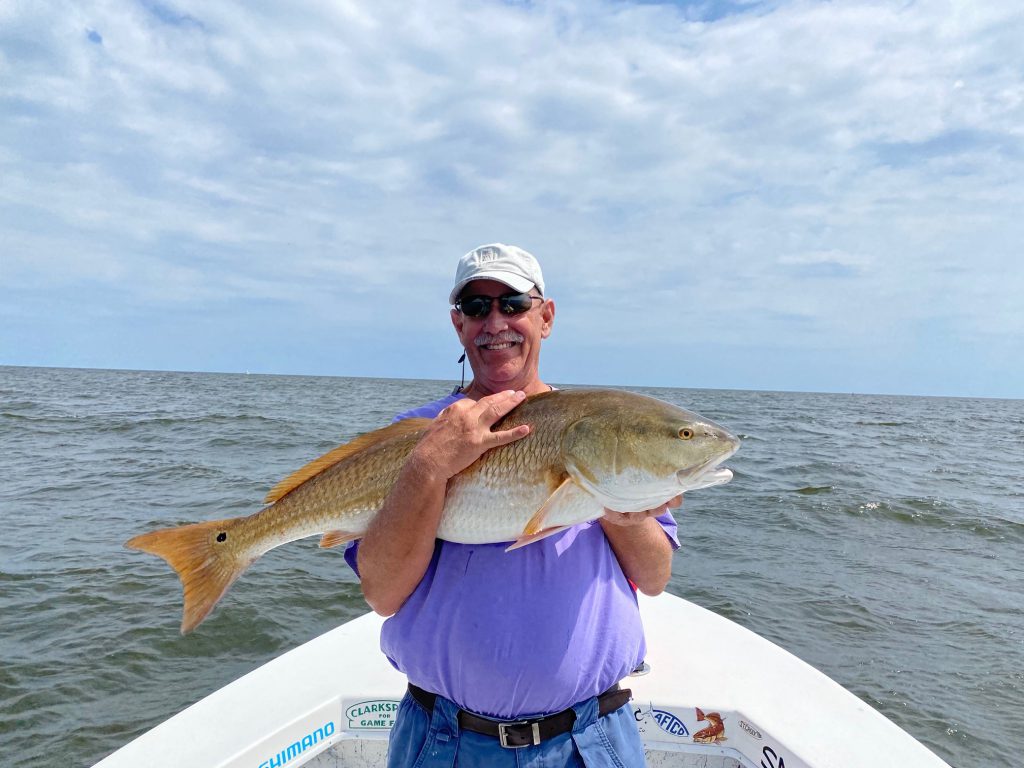 Paul Wiegand, from Durham, NC, with a 42″ red drum caught on a cut pogie in the Pamlico Sound. He was fishing with Capt. Joe Tunstall of Carolina Traditions Guide Co.

Justin, of Breakday Charters, reports that the mullet run starting and pushing bait out of the inlets has really kicked off nearshore fishing action. Paired with a slight drop in water temperature, anglers are finding almost non-stop casting action on schools of false albacore and spanish mackerel.

King mackerel haven’t quite moved onto the beachfronts, but weather pattern changes have them more actively feeding. Targeting structured areas a few miles off has been best, but don’t be surprised to see fish shallow.

Inshore anglers have seen a great class of slot and over-slot red drum just about anywhere from back in the marshes out to the inlet.

Fishing the inshore structures with shrimp has been producing black drum and some good-sized sheepshead.

Joey, of Dancin’ Outlaw, reports that wahoo fishing is slowly picking up, as recent trips are finding the action largely hit or miss. Though weather patterns are changing, much of the offshore water temperatures remain high. This has bait scattered, and anglers look forward to water temperatures coming down a bit to congregate this bait on bottom structure. Once this happens, the wahoo become grouped over these structures and easier to target.

Trolling is also producing some sailfish.

Bri, of Oceanana Pier, reports that anglers are beginning to land a few larger spanish mackerel, with most action being on live bait, but there is still some success on the smaller (1-3 lb.) spanish while casting jigs at frenzied schools.

Bluefish are mixed in around bait balls and are being caught with casting jigs and Gotcha plugs.

Anglers bottom fishing are finding a mixed bag of sheepshead, hogfish, and croakers.

Drum fishing has been decent, with a few black and red drum mixed in the daily counts.