Spencer, of Chasin’ Tails Outdoors, reports that inshore anglers have been seeing some great red drum fishing on grass flats and creek mouths in the area. Getting on the water early has been key with the high mid-day heat. Both topwater plugs and live baits have been producing strikes.

Flounder have been thick around many of the inshore structured areas. Gulp soft plastics fished on jig heads have been great when scouting around these areas and should produce some keeper fish.

Bull red drum fishing has been good up around the mouth of Adams Creek and into the Neuse. Cut bait has been the most productive, with anglers finding the deeper (15-20’) depths to be best.

Spanish mackerel and bluefish are feeding on schools of glass minnows and menhaden around the Fort Macon area. The higher and incoming tide cycles have been best, since it brings the cleaner water inshore.

Trolling out at the nearshore ARs are producing plenty of spanish mackerel and bluefish.

Offshore fishing is steady, with high water temperatures having fish scatted from the Stream out to the east side of Cape Lookout. A few good-sized wahoo (to 58 lbs.), large king mackerel (to 39 lbs.), and scattered mahi are making up most of the trolling action. 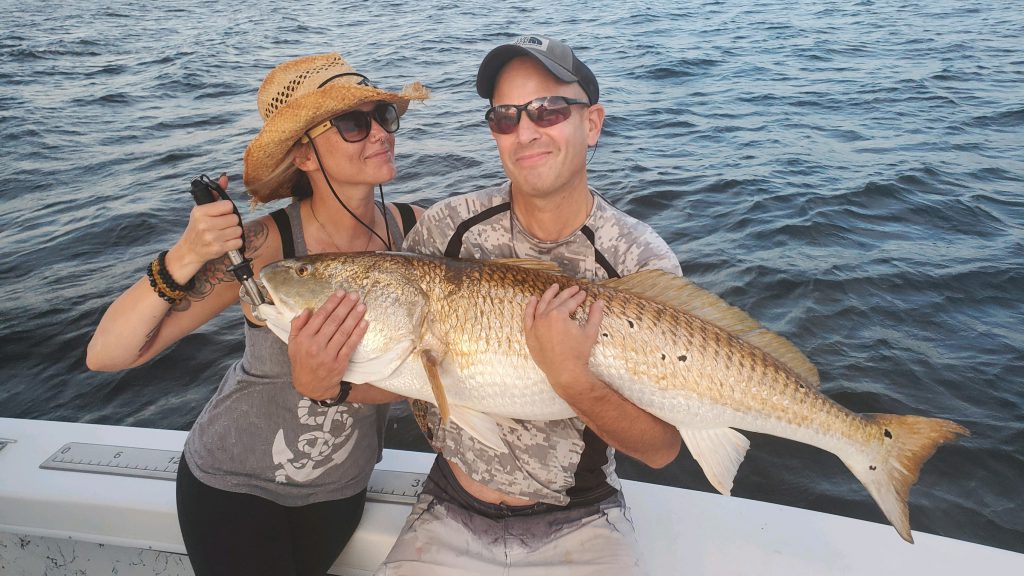 Brittany and Jon with a red drum caught in the Pamlico Sound using cut bait in 7′ of water. They were fishing with Capt. Joe Tunstall of Carolina Traditions Guide Co. out of Atlantic Beach.

Joe, of Carolina Traditions Guide Co., reports that spanish mackerel fishing has picked up along the beaches and out the Cape. Anglers are finding great action casting topwater spoons with light tackle.

Some schools of nice-sized bluefish are also in this stretch, and they’re hitting the same jigs.

King mackerel action has been steady from the beaches out to the 80’ depth range.

Inshore anglers have been finding red drum holding shallow and feeding very aggressively. As cooler weather ushers in more schools of shrimp that will fill the backwater flats and bays, this redfish action only gets better.

Speckled trout action has picked back up a little, with live shrimp or mullet being the best baits to match all the natural bait moving around in the back bays.

Trophy red drum action has fired off up in the sounds and into the mouth of the river. Anglers are finding the citation reds tearing up bait schools pushed in from the ocean. While artificial baits and popping cork setups produce strikes for the most dedicated anglers, soaking bait on Lupton rigs on a good edge will be the most productive method.

Chris, of Mount Maker Charters, reports that nearshore trips have been finding great action while casting to schools of spanish mackerel, bluefish, false albacore, and lookdown fish in the area. Targeting deeper areas around the inlets and shoals have been best with glass minnow jigs and spec rigs.

The inshore bite has been hit or miss, mostly due to the excessive daytime heat. Anglers are still catching plenty of slot-sized red drum, a few speckled trout, and flounder along the ICW. Live shrimp, live mullet, and cut baits have all been successful, with the consensus that natural baits have been best. Look for this action to pick back up as we move away from the peak summer temperatures.

The trophy red drum fishing has been overall a bit slow, but there are fish being caught. Anglers are having success casting artificials in the morning and during the day, and then switching to cut baits in the evening. 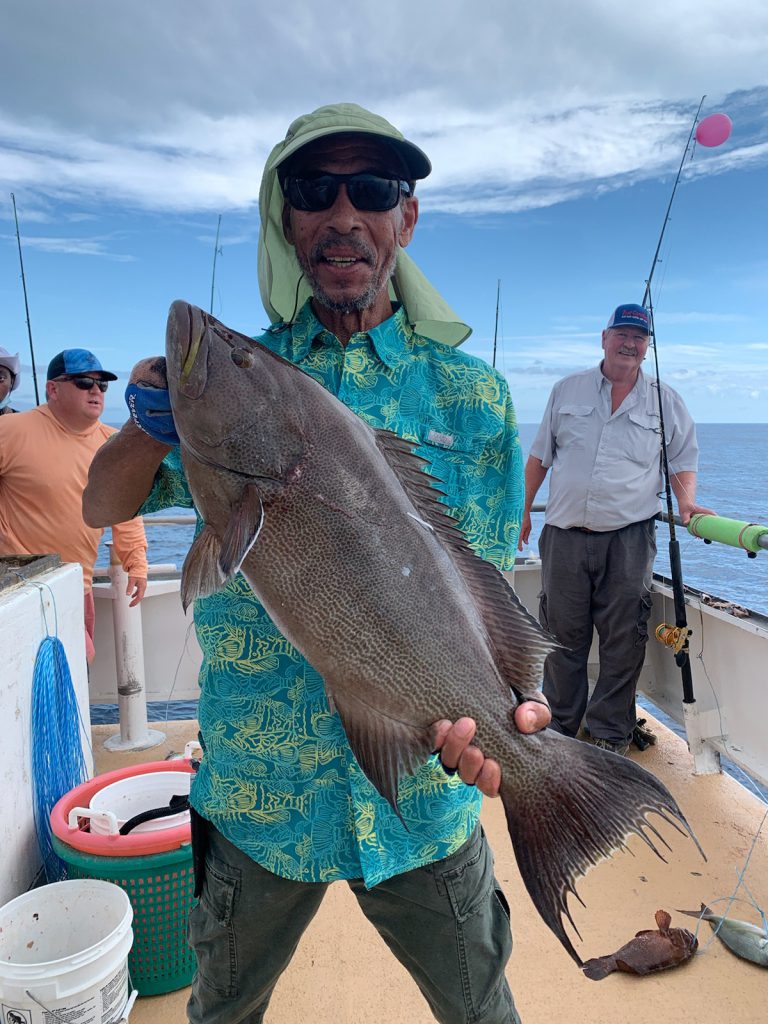 Richard Jacobs, of Goldsboro, with a scamp that was caught on cut bait. He was fishing out of Morehead City aboard the Carolina Princess with Capt. Wayne Dodson.

Justin, of Breakday Charters, reports that red drum fishing has been excellent inshore, with a great mix of over-slot and slot-sized fish. With groups spread out, anglers are finding action while targeting oyster beds, marsh points, and structure with nearby deeper holes. Topwater plugs, cut baits, and live baits have all been getting strikes in these areas.

Anglers making the run up into the sound around the mouth of the Neuse are catching citation-class red drum. This bite gets even better as the month moves along. The key with finding large redfish is to look for signs of life whether that be birds working or bait flipping on the surface. A popping cork with a large soft plastic is the best setup for this fishery.

Nearshore trips have found spanish mackerel fishing to be hit or miss through these “dog days of summer.” Casting glass minnow jigs has been the most reliable bite.

A few schools of false albacore are showing up from the beaches out to the 10-mile range. These are early schools that show in better numbers as it moves to fall.

King mackerel fishing has been steady in the 60’ depth range, with quality-sized fish being landed when found.

Bottom fishing has been good, as the action has included a variety of triggerfish, grouper, and amberjacks.

During the keeper flounder season, anglers will have success targeting both inshore structure and nearshore reefs with live baits and bucktails.

Joey, of Dancin’ Outlaw, reports that some large wahoo have started to move into the area, even though water temperatures are just barely moving off the summertime highs.

Billfishing has been good all summer, with big blue marlin and sailfish continuing to be mixed in the trolling bite.

Mahi are still around in good numbers, but they are scattered in their typical summertime fashion. Finding a grass line or floating debris is key in locating action.

Wayne, of Oceanana Pier, reports that bottom fishing has been best with the high water temperatures. Getting on the pier either early in the morning or late in the evening has been key for seeing better numbers of bites. A variety of sea mullet, spadefish, sheepshead, and good-sized black drum are all hitting fresh shrimp on bottom rigs.

Some flounder and red drum are being caught on live and cut mullet.