Patrick, of Captain Smiley’s Fishing Charters, reports that anglers look forward to water temperatures catching back up to a typical season and reaching mid-60s for fishing to really fire up.

There are good numbers of black drum holding around inshore docks and oyster beds.

Red drum are feeding alongside the black drum as they skirt these flats and potholes searching for food. Fresh bait shrimp and Gulp baits are producing most of the action for both species. The scent on these baits is key in the cooler water temperatures.

Speckled trout are still holding over in their winter-time haunts and will begin transitioning to the waterways and around the jetties as water temperatures rise. Live shrimp has been the hot bait on recent trips.

Nearshore structure is holding good numbers of weakfish, with flounder starting to move in.

Over the next few weeks, flounder fishing picks up as better numbers move in off the beach. The Hog Inlet and Cherry Grove areas are popular starting points while fishing with live mud minnows or mullet. 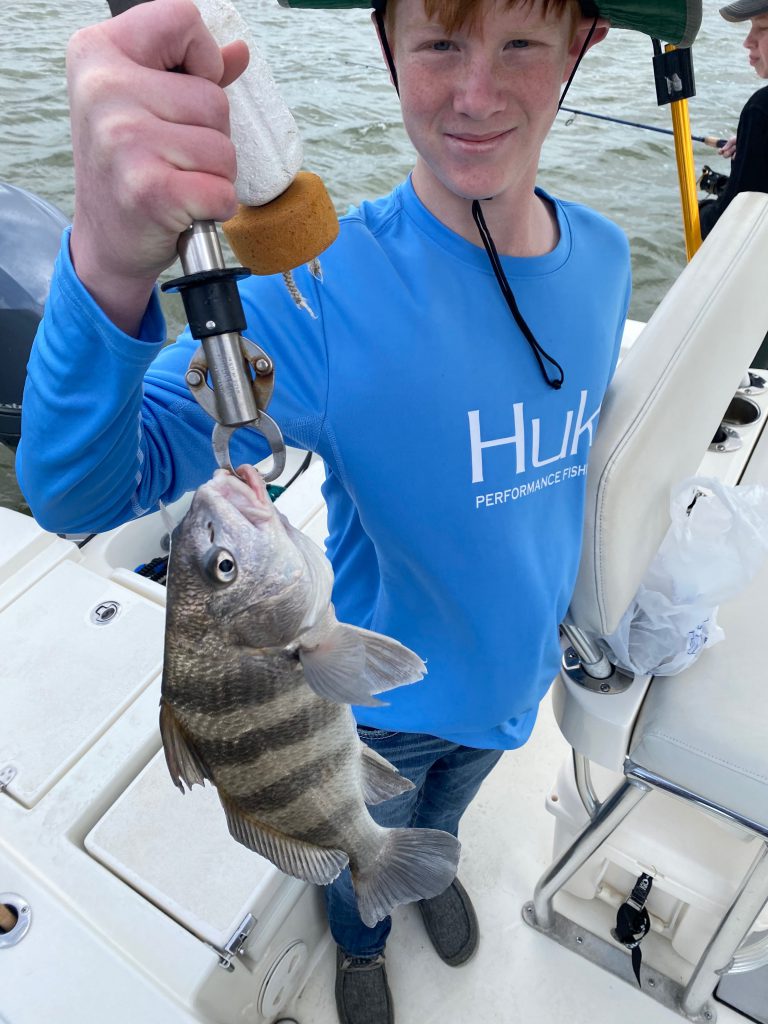 Huber Crawford with a black drum caught using cut shrimp on a Carolina rig. He was fishing near Cherry Grove with Capt. Smiley’s Fishing Charters.

Redfish are starting to break up from their winter back creek schools and space throughout the area. Mud minnows and fresh shrimp are the go-to baits for the time being. It is important to target areas of structure, be it creek mouths, docks, oyster bars, or flats near deeper water. Right now, it’s not necessary to be out at first light. Letting the sun heat up the water makes the fish more active. Falling tides have been best for these areas because the flats and surrounding areas will heat up first.

Black drum are hanging around the docks (along with the reds) and are feeding on fresh shrimp. If you don’t get bit after a few minutes, move on to the next spot.

Speckled trout are picking up a bit, with soft plastic artificials such and Gulp or Z-Man on jig heads being most productive. To locate these schools, it’s best to try a drift or slow troll to find where they are biting. Finding one trout is usually a sign there are more in the same spot.

Chopper-sized bluefish are in a lot of the same places as the trout.

Flounder are not quite back from their winter holdovers in the ocean, but they should be showing up any time once the water gets 65+ degrees and stays there.

Larry, of Voyager Charters, reports that April is a good month to fish, with action picking up due to warmer water temperatures. Offshore trolling trips have been doing very well, with blackfins and some larger wahoo being caught in the 150-300’ range on skirted ballyhoo.

The first schools of mahi should begin to show up over the next few weeks. With the early season action, it’s crucial to find hard temperature breaks and clean water.

King mackerel are starting their push nearshore as they currently hold around 15 miles.

Offshore bottom fishing is an awesome fishery throughout April going into May. The 120’+ depths will be producing vermilion snapper, amberjacks, triggerfish, porgies, and grouper.

The bottom structures within 10 miles are holding black sea bass, porgies, and sharks. These closer reefs are great targets for anglers looking to take advantage of the sometimes small springtime weather windows.

Trolling over nearshore structure with Clarkspoons will be producing bonita and spanish mackerel. Towards the end of the month, small sharks will also become more prevalent in these areas.

Capt. Bob Strange, of Strange Magic Fishing Charters, with a redfish that fell for a Gulp soft plastic in the ICW near Sunset Beach.

Tony, of Cherry Grove Pier, reports that whiting are showing up now that local area water temperatures are on the rise. The fish only get larger and more plentiful going later into the month.

Stingrays and sharks are still hanging out and taking a few bites at the bottom-rigged bait offerings.

Bluefish should start to show up anytime as they push up the coast. They are followed by spanish mackerel, and the spanish typically arrive around the end of the month.

Bottom fishing anglers will be catching croakers and a few spot mixed in with the sea mullet.

It only takes a few more degrees to see spring fishing really fire off. Once getting in the low 60s, anglers should start seeing bluefish, and anytime from the middle to end of April should see spanish mackerel arrive.