Patrick, of Captain Smiley Fishing Charters, reports that good amounts of live shrimp have been around in the creeks, and the presence of shrimp has helped in firing the summer fishing off.

Anglers out fishing the jetties are having success with live shrimp rigged under float corks. When cast about 15-20’ off the rocks, these rigs are producing speckled trout, bluefish, and ladyfish.

Carolina-rigged cut menhaden fished in deeper holes around the jetties have been producing sharks, large red drum, and tarpon hookups.

Inside waters are holding speckled trout along many of the grass lines and small inshore ledges.

Smaller red drum and black drum are staged in deeper holes (4’ range) in the mainland creeks. The red drum have been feeding well on mud minnows, and the black drum are preferring shrimp. Both species are more active on the low or falling tide cycles.

Flounder fishing has been hit or miss. Many smaller flatfish are being caught inshore, but the nearshore wrecks (2+ miles) have been holding plenty of keepers for anglers running outside.

King mackerel are scattered anywhere from along the beachfront to well offshore. Reefs in the 10+ mile range have been holding most of the schools.

Cobia are being caught at nearshore reefs with live menhaden and pinfish. 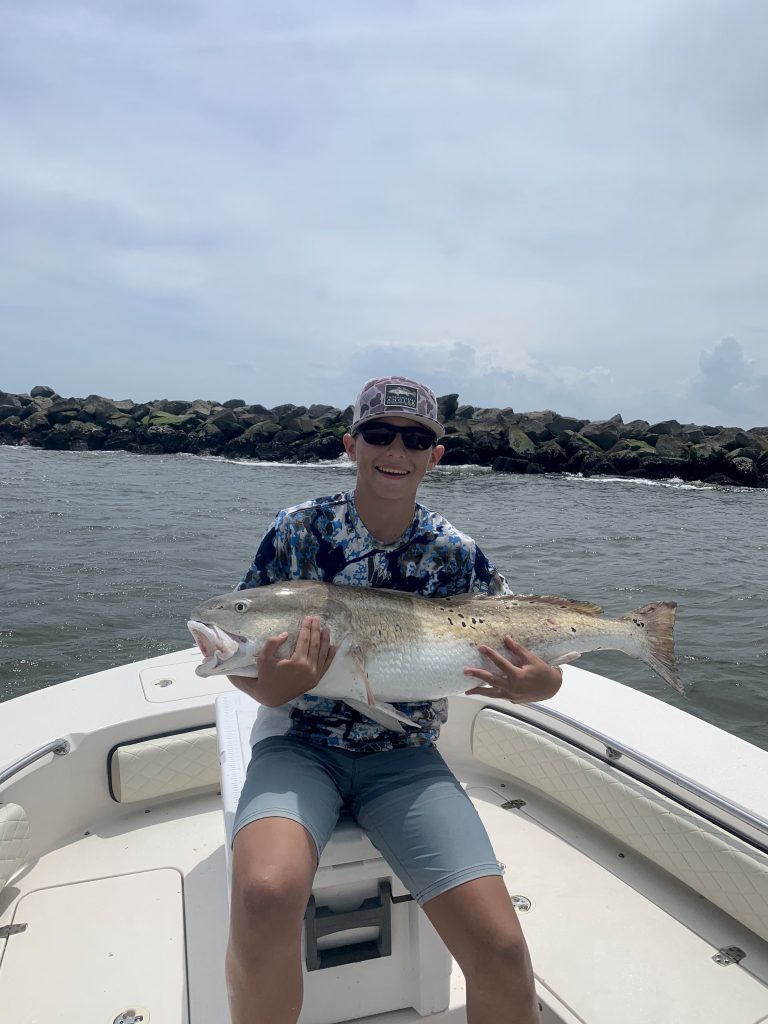 Peter Parrous with a 37” redfish caught using cut mullet on a drum rig at the Little River jetties.

Bob, of Strange Magic Fishing Charters, reports that redfish are feeding near docks throughout the area and will fall for fresh shrimp and live minnows on either Carolina rigs or jig heads. The middle of the rising or falling tide cycle seems to be the best, with water movement at its maximum. Cruising the smaller creeks and casting to the banks with Gulp soft plastics is also working.

Flounder and trout are in the mix. Flounder are plentiful, and Gulp baits and mullet minnows on a slow retrieve have been producing the most action. Gulp is an instant reaction bite, but with live minnows remember to give the flatfish 15-20 seconds to flip the bait prior to a gentle hook set and lifting the rod to 45 degrees to let the fish hook itself.

Trout are being caught on a variety of soft plastics (from Gulp to Z-Man) and live shrimp under popping corks. Target areas of moving water with an eddy nearby in the creeks, as well oyster mounds and points.

Black drum are feeding on fresh shrimp fished along docks. The key has been not to spend too much time at any one dock. Typically, if the bite doesn’t happen in the first ten minutes, it’s time to move.

Structure in the 20+ mile range has been strong with grouper, triggerfish, jacks, and cobia.

Keeping a free-lined bait out has brought in some large king mackerel.

Anglers heading out on night fishing trips are getting some great shark action on both Atlantic and blacktip sharks.

Better numbers of dolphin are showing up for anglers trolling skirted and naked baits. 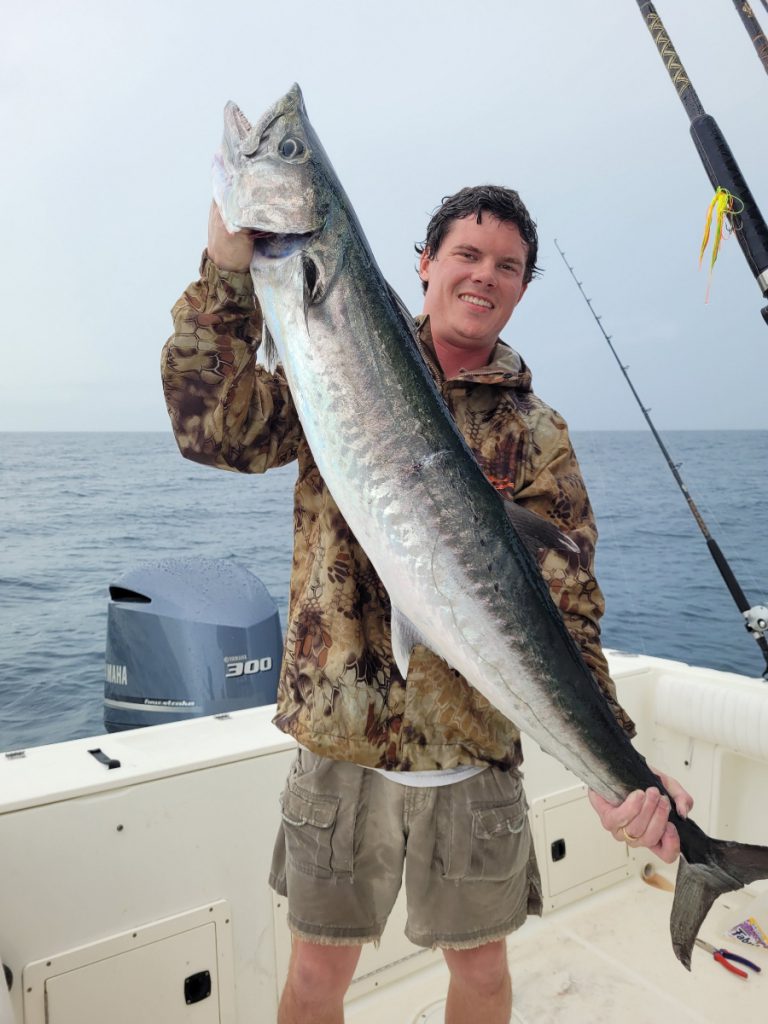 Zachary Kinlaw holds a king mackerel that was caught using a live pogie. He was fishing out of NMB at the Jungle.

Michael, of Cherry Grove Pier, reports that bottom fishing has been wide open for anglers fishing fresh natural baits. Spots, croakers, and whiting are being landed by the bucketfuls.

The spanish mackerel bite has been dependent on clean water.

Lynn, of Apache Pier, reports that bottom fishing has taken over as the main focus, and a variety of natural baits and Fishbites strips are bringing plenty of action on croakers.

Anglers need water conditions to be clear for the surface-feeding species to move within range. Spanish mackerel and kings (up to 16 lbs.) will be consistently around throughout the month on those days with clean water.