Patrick, of Captain Smiley Fishing Charters, reports that speckled trout and redfish action has been strong. Water temperatures have been rising in the area, and the addition of bait moving around has both species more active. On the incoming and high tide cycles, anglers are having success drifting along inshore ledges and deep grass banks. Live shrimp rigged under float rigs have been the top producing setup. Anglers targeting trout at the jetties are using the same drift method with live shrimp.

Red drum fishing has been best around inshore structure such as docks, bulkheads, and oyster beds. Targeting these areas on an outgoing tide with cut shrimp or Gulp soft plastics has been producing bites.

Black drum are still hanging around the deeper docks and feeding on cut shrimp.

A few smaller flounder are starting to arrive inshore. Over the next month, these numbers keep trending up as they follow bait in through the inlets.

False albacore and some bonito are being found feeding on baits under birds. Casting silver spoons and trolling Clarkspoons behind planers are both producing strikes. 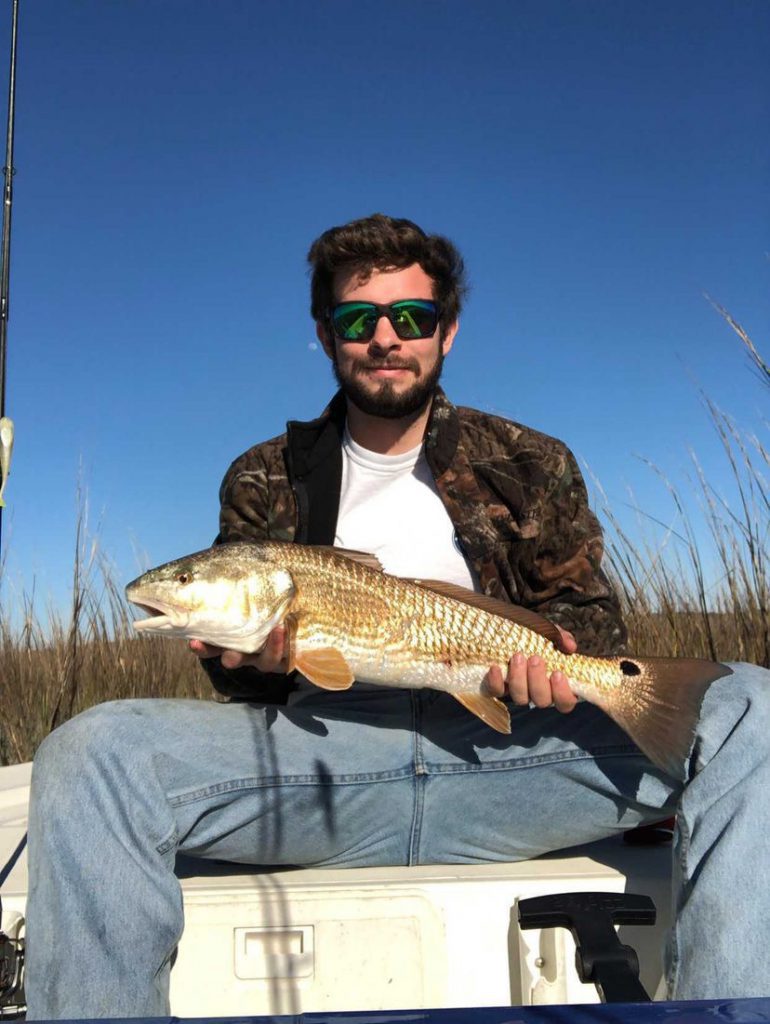 Ian Butler with a red drum that fell for a Z-Man paddle tail while fishing a creek on Edisto Island, SC.

Bob, of Strange Magic Fishing Charters, reports that flounder have made their way back from their winter ocean haunts and are hungry and active. Gulp and Z-Man soft plastics rigged to jig heads are working very well. Focus in on grass banks on the higher tide cycles and deeper holes on the falling tides. It seems like areas that have access to fresh ocean water are producing better than the back of mainland creeks.

Speckled trout are being caught with the same types of lures as the flounder. Smaller creeks emptying into larger waters with a deep hole at the entrance are great places to track the larger trout down.

Redfish have pretty much broken out of their large, winter backwater schools and are scattering out over the marshes and ICW. Structure is always key for redfish. Docks, creek oyster mounds, points, and shell banks are all great starting places when scouting for schools. Using a trolling motor and casting artificials up to the shoreline when working the creeks is usually the most effective technique.

Black drum are hanging in many of the same places as the reds, especially around docks, with fresh shrimp being the go-to bait.

Larry, of Voyager Fishing Charters, reports that offshore bottom fishing has been spectacular in recent days. Anglers are pleased to be returning with bags loaded down with triggerfish, vermilion snapper, and grunts.

Large amberjack and American red snapper are mixed in the 120’ depth range.

May 1 is the beginning of grouper season, and based on recent trips, it looks to be on fire from the start. There have been many large grouper that have needed to be released going into keeper season.

Mahi is the species to watch, with May being the best month for the larger dolphin to arrive. Both sizes and numbers will be ramping way up, and the schools should start showing any day now.

Sharks are also starting to pop up around the nearshore structured areas. 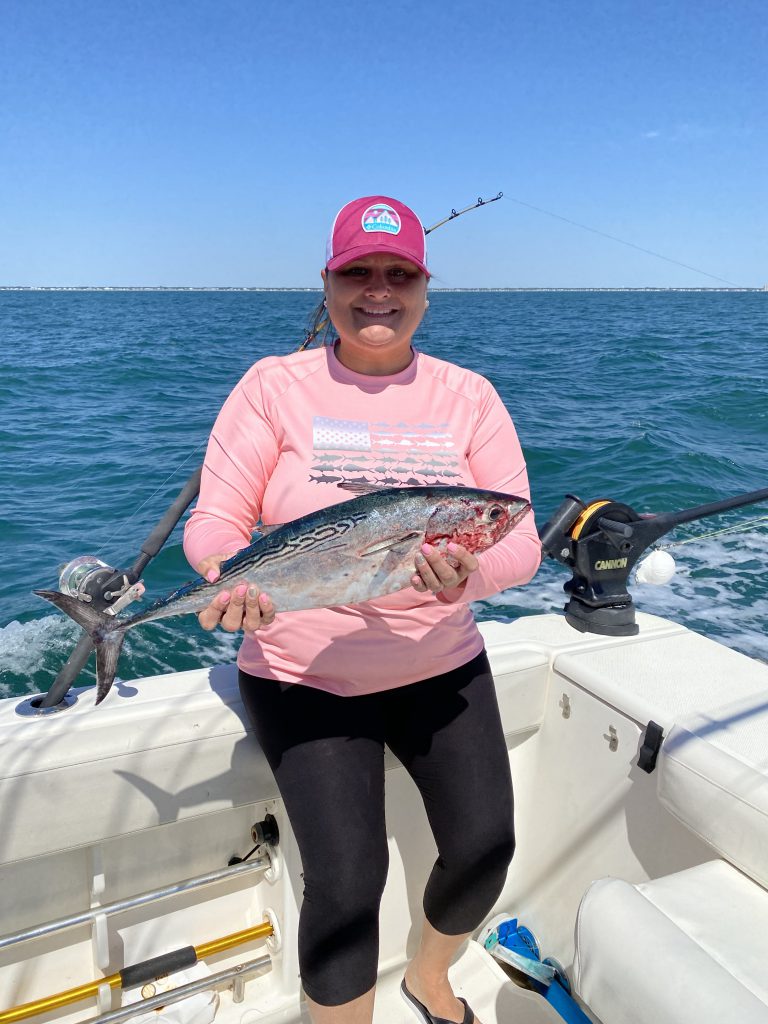 Jennifer Griffin, of High Point, hooked this bonita while trolling with Clarkspoons three miles off of North Myrtle Beach.

Cameron, of Little River Fishing Fleet, reports that offshore trolling trips have been producing some nice 40-50 lb. wahoo. Blackfin tuna have been plentiful on these Gulf Stream trips, too, and will be sticking around into the next month.

A few large amberjack and barracuda are mixed in as bycatch.

Bottom fishing has been great, with many of the offshore reefs holding triggerfish, big beeliners, and black sea bass. Going into May, look for a bunch of the grouper species (gags, scamps, etc.) to be included in the action.

Nearshore action has picked up a lot, with warmer water temperatures bringing spanish mackerel and bonito onto the beach. Anglers are having success while casting glass minnow style jigs at the surface-feeding schools.

The nearshore ARs and structure are holding black sea bass, ringtails, and porgies.

Wick, of Cherry Grove Pier, reports that the action on bottom fish species has slowed down a bit as the seasons change over.

Schools of bluefish have moved in around the pier and are hitting Gotcha plugs and some bottom-rigged baits.

Spanish mackerel are starting to arrive, now that water temperatures are creeping up in the area. Gotcha plugs and metal casting jigs both work very well when spotting schools breaking the surface.

Ashton, of Apache Pier, reports that anglers fishing baits on the bottom have been doing very well with weather patterns starting to resemble spring.

Whiting are being caught in good numbers with cut shrimp. The first few pompano have started to show, and they only get more active in the surf zone going later into May.

Bluefish are scattered in the counts, with both bottom-rigged baits and casting jigs getting strikes.

Spanish mackerel are beginning to strike with more consistency. Casting small metal jigs and Gotcha plugs are best for targeting the surface-feeding schools.