Patrick, of Captain Smiley’s Fishing Charters, reports that inshore surface water temperatures around Little River are still up around 70 degrees, and bait, including mullet, is everywhere.

Fall fishing has arrived, and while the numbers are not here yet, anglers are catching some very large speckled trout (to 28”). Live shrimp are the hot ticket, and more trout numbers will soon arrive.

Bluefish are being caught on the inside by throwing topwater plugs, and some good-sized flounder are hitting Carolina-rigged live finger mullet.

Also, the inshore redfish action has been very good around grass lines for anglers rigged with live mullet or shrimp.

With all the mullet prolific around the jetties and in the surf, you can catch reds about everywhere right now. Some smaller reds are being caught tight to the rocks at the jetties on finger mullet, while the bigger drum seem to be staying a little further off the structure. Fishing menhaden on a Carolina rig has been the best way to catch the bulls.

There are also a bunch of bluefish in the inlet and around the jetties smashing finger mullet, and spanish mackerel are mixed in the same areas.

Out on nearshore structure, the catch includes flounder and a bunch of 18-20” bluefish. 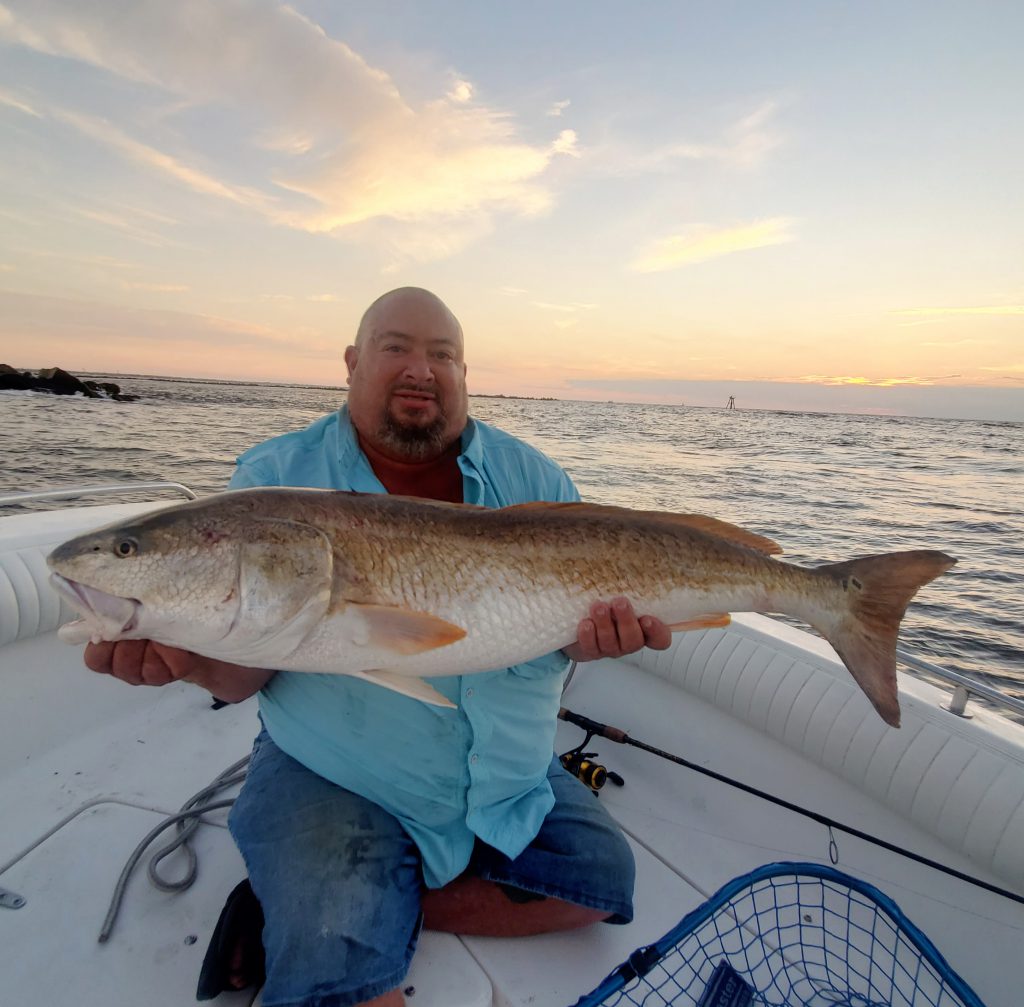 Seth Schuman, of North Myrtle Beach, with a redfish that fell for a mullet. He was fishing the Little River jetties with Chilly Water Fishing.

Bob, of Strange Magic Fishing Charters, reports that there is still a lot of bait all over the inshore and nearshore areas that has fish very active.

Bull red drum are being caught out at the Little River jetties with live or cut mullet fished on the bottom. Anglers have found the rising tide cycles as the best times to target these trophy fish.

Slot-sized red drum are inshore and can be found in the ICW as well as smaller creeks. Anglers are finding success while focusing in on shell banks, and when the tide is high, they’re working the grass lines. Popping corks rigged with live mullet or shrimp work great and also give a chance for speckled trout hookups.

Speckled trout fishing overall has been hot one day and ice cold the next. With the water temperatures cooling, the bite should turn on more consistently. The typical holes along the ICW and mainland creeks will hold plenty of specks. It’s key not to spend too long in any one spot, as these trout schools are constantly on the move.

Flounder have been very prevalent, with everything from live minnows and shrimp to soft plastics fooling the flatfish. Throw close to the banks on the higher tides, and concentrate on deeper holes during the lower tides. It also helps to look toward any kind of structure break as a potential hot spot.

Black drum action is also picking up, with live and fresh shrimp working best. Target the deep holes in the backs of creeks and around docks to find action.

Larry, of Voyager Fishing Charters, reports that bottom fishing has been strong in the 120’+ range. These deep-water runs are providing anglers with mixed bags of triggerfish, grunts, and big amberjacks.

There have been tons of vermilion snapper hitting cut baits over these offshore structures as well.

Anglers bottom fishing in the 10-mile range are finding big black sea bass and porgies, and fishing just outside Little River Inlet and out along the beaches has been producing tons of spanish mackerel.

King mackerel are being found just about everywhere from the beachfronts to out over nearshore and offshore structure. 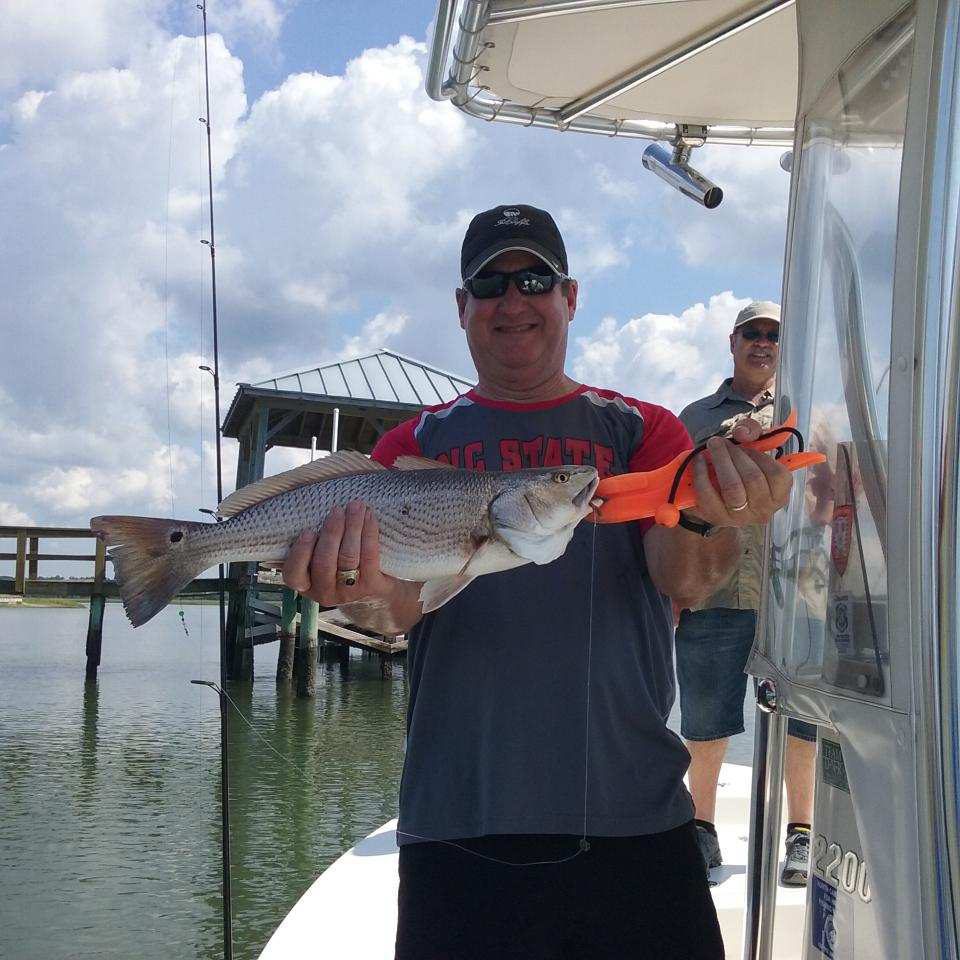 Glenn Boykin holds a 22″ redfish that fell for a mud minnow near Sunset Beach. He was fishing with Capt. Bob Strange of Strange Magic Fishing Charters.

Edgar, of Cherry Grove Pier, reports that anglers have been catching good numbers of spanish mackerel on casting jigs as these fish breeze along the beaches.

Bottom fishing has seen a decent uptick now that the weather has started to more properly represent fall. A mixed bag of pompano, croakers, and spot are all being found.

There have been some nice flounder catches as well, with the flatfish moving out onto the beaches to feed on all the bait around.

Calvin, of Apache Pier, reports that water temperatures falling has seen action pick up on the pier. The run of citation-class red drum have migrated into the area, and pier anglers have been able to land quite a few.

Sight-casting around bait balls and surface-feeding frenzies has been producing a lot of spanish mackerel and some bluefish.

Bottom fishing has been good for pompano and a few small runs of spot.