Patrick, of Captain Smiley’s Fishing Charters, reports that flounder fishing action on the South Carolina side mirrors what anglers saw during the North Carolina keeper season, with hit or miss successes.

Redfish action has been very good for anglers fishing with live finger mullet to match the bait schools that have begun to move around the inshore waters. This 18-30” class of drum are pushed up on the flats during lower tide cycles, where high-water periods have anglers targeting docks along the ICW and deep grass edges.

Speckled trout fishing has started to pick up even more now that temperatures are beginning to cool across the region. Live shrimp rigged under floats and drifted over ledges has produced some solid strikes. Though not many anglers are targeting the jetties, there are sure to be some schools of trout out there as well.

With schools of mullet pushed along the beaches, the nearshore spanish mackerel action has fired off. Large numbers of 2-5 lb. spanish are pushed up on shoals near the jetties. Live bait and walk-the-dog style topwater plugs are getting the surface-feeding schools to strike.

Some over-slot red drum are being caught in the inlet on cut mullet, cut bluefish, or live mullet fished on the bottom.

There are a few tarpon running through the area, and they will hit the same baits fished for the large redfish. 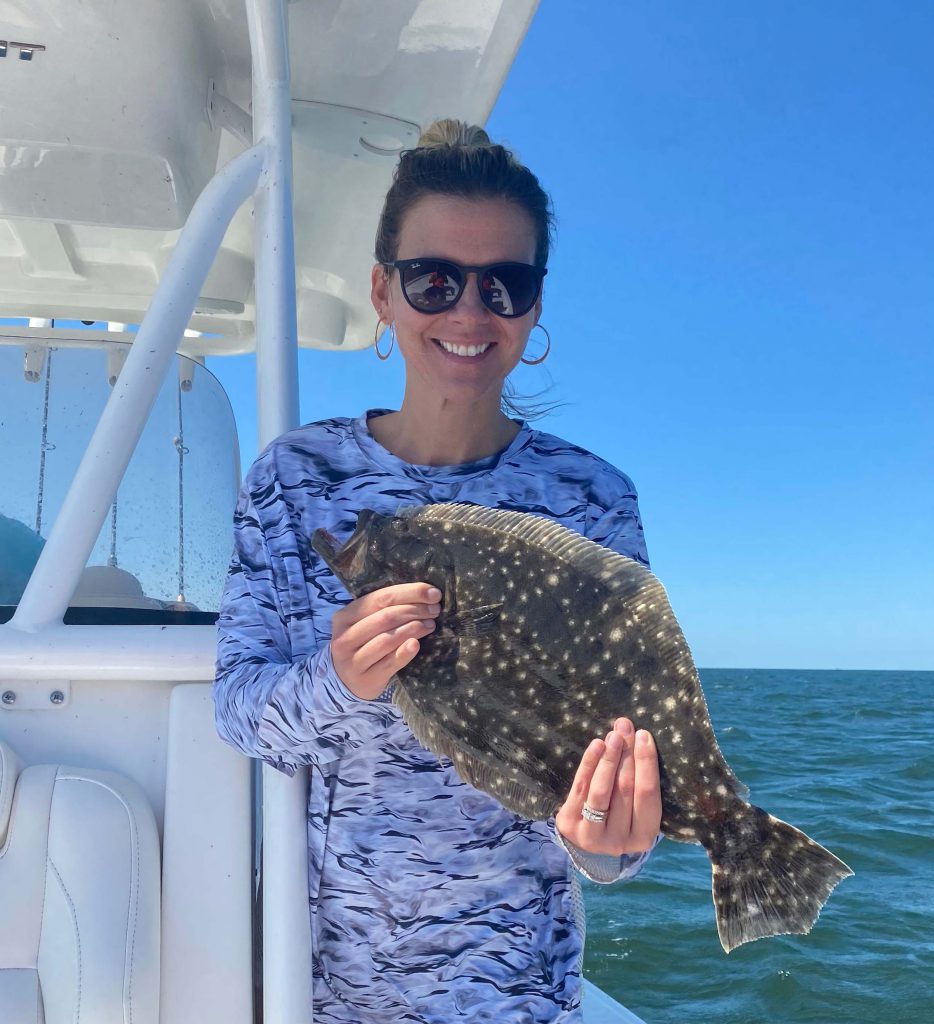 Lauren Nye with a flounder that hit a finger mullet while she was fishing a nearshore reef off of Ocean Isle.

Bob, of Strange Magic Fishing Charters, reports that the mullet run has begun, and the fishing is firing up in the area.

Bigger flounder are being caught and are pretty much going for anything from live shrimp, fresh dead shrimp, live minnows, to all sorts of soft plastics. Focus on docks and creek openings. On the higher/rising tides, you can work the whole dock and go back further in creeks to find those out of the way deep holes. On lower/falling tides, hunt the deeper holes in front of creeks and marsh drains.

These docks are also holding red and black drum, which will go for the same baits, and structure is key for both drum species. Using a trolling motor to cruise the creeks casting from side to side looking for any kind of break in the shoreline has helped find the groups of fish.

Speckled trout are starting to bite in better numbers. Look in the larger waterways, especially around shell banks and oyster mounds that transition to grass. Focus in more on areas that have deeper water nearby, and don’t spend much time in any one spot, as trout will actively move up and down the shore banks

The mullet run has also kicked off the annual bull redfish bite at the Little River jetties. Anglers are having success with live mullet, cut mullet, fresh shrimp, and heavy bucktails with trailers fished near the bottom.

Larry, of Voyager Fishing Charters, reports that the deeper (120’+) range has been loaded with big grunts, triggerfish, hog snapper, porgies, and limits of beeliners.

Some large cobia have been scattered around these deep structured areas, too.

A few mahi and large king mackerel are being caught by baits fished on drift lines over these bottom areas.

Trolling trips have been hit or miss, with plenty of hot water still offshore. As the temperatures drop and breaks form up, anglers will find much more success with wahoo, tuna, and dolphin.

Live bottom areas in the 20-30 mile range are holding strong numbers of good-sized gray snapper (to 24”) and king mackerel. 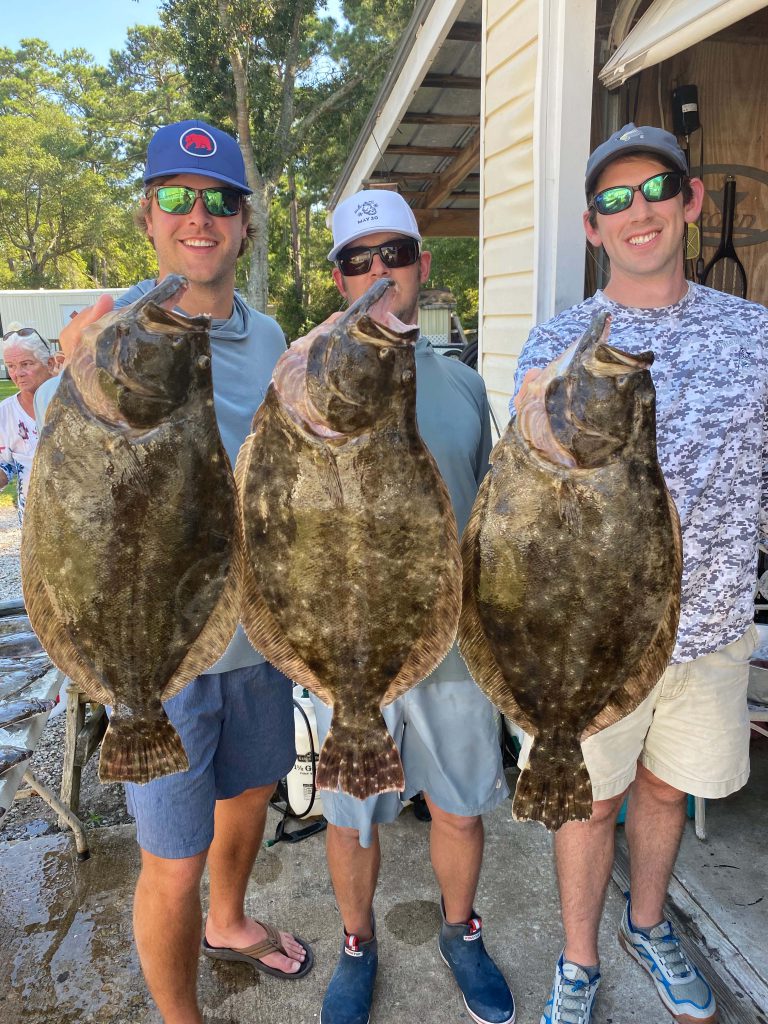 Nathan Propst, Jason Johnson, and Tuck Brome with some flounder that fell for live mullet while fishing off Ocean Isle Beach.

JT, of Cherry Grove Pier, reports that bottom fishing has picked up a lot now that water temperatures have begun to cool from the summertime highs. A mix of croakers, whiting, and small runs of spot are all being found in the daily counts.

Flounder and red drum action have been picking up now that schools of mullet are pushing into the surf zone, and anglers fishing in holes closer the breakers are landing some pompano.

There are good numbers of spanish mackerel surface-feeding on schools of bait moving past the pier. Casting jigs are providing plenty of action, with some larger specimens hitting live baits.

Some king mackerel are being caught by anglers off the end. The kings are pushing closer to the beaches, and anglers anticipate seeing some good catch numbers.

Lynn, of Apache Pier, reports that bottom fishing anglers are catching good-sized pompano and spadefish while fishing closer to the breakers and against the pilings.

Anglers rigged with casting jigs and Gotcha plugs are landing plenty of bluefish and some ribbonfish.

King mackerel are being caught, and the king fishing tends to get even better as it moves into fall.