Patrick, of Captain Smiley Fishing Charters, reports that anglers have continued to find fairly good action on speckled trout. Targeting jetties and deeper grass banks in the creeks with live shrimp has been producing some nice keepers.

Redfish action has been great just about anywhere inshore. Deeper holes with nearby docks and grass lines during higher flood tides are two great areas to start the fishing action. Topwater plugs are getting great hits on the cooler days and early mornings, with both live and cut mullet working well once the sun is high.

Fresh shrimp fished on a bottom rig is producing good numbers of black drum and croakers.

The flounder bite has been scattered inshore, with anglers finding the best action out on the nearshore structure. Carolina-rigged menhaden or mullet are great setups for getting strikes.

Spanish mackerel are being found from the beachfronts out to the nearshore wrecks, and some scattered spadefish are mixed in at the nearshore reefs.

Sharks are plenty this time of year, especially for anglers fishing live baits. 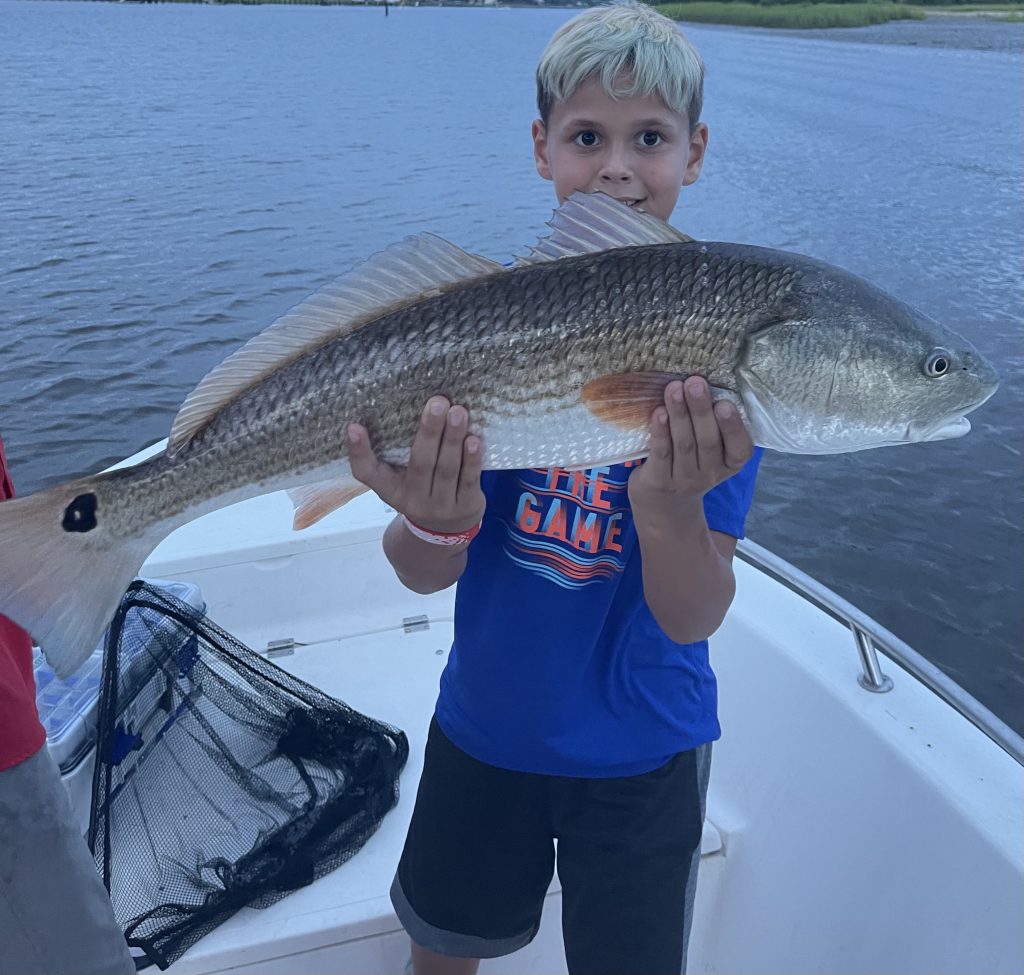 Brycen Devenow with a redfish that fell for a live menhaden while fishing the Ocean Isle Beach area.

Bob, of Strange Magic Fishing Charters, reports that with water temperatures high, the fish have been a bit lethargic, especially on the brightest and hottest days. To combat this, anglers should focus on getting on the water as early as possible to take advantage of cooler morning temperatures.

Another factor with higher water temps is the dissolved oxygen content of the water. Target areas closer to inlets on rising tides to utilize the fresher, cooler ocean waters. Areas further back in creeks will hold fish, but look for deeper holes that will be a degree or so cooler. The flats with darker mud will be tough due to the sun really heating the water up too high for local species’ liking.

Speckled trout are being caught in good numbers on just about any bait. Just like in winter, slow your presentation down. Everything from popping corks with live shrimp or minnows to soft plastics (Gulp and Z-Man) fished on jig heads are producing strikes. Target creek mouths and ICW banks on higher tide cycles, and then deeper holes on lower. The key is to look for areas with current, as trout like moving water.

Redfish are hanging out in similar places as the trout and will hit similar baits. With redfish, look to also target docks, especially later in the day as the cover provides a break from the sun.

Black drum are a bit harder to find, but generally they will be staged around docks. Live and fresh shrimp will produce the most success.

For flounder, look for a combination of structure and a presence of bait or birds, as these areas should be productive. Creek mouths and drains are best on a falling tide, and then cast tighter to the banks on the rise. Similar to the redfish, don’t forget to target docks. Dragging live shrimp or minnows on the bottom is a great technique. With live minnows, just remember to give the flatfish a few seconds to swallow the bait after that initial thump. Soft plastics on jig heads are also getting strikes, and bouncing the jigs off the bottom is the best way to snag a trophy flatfish. Recently the brighter color patterns have been best, and using Gulp or adding Pro-Cure scent provides an extra attraction.

The mid-range fishing (15-35 miles) has been hit or miss, with mixed king mackerel and mahi.

Trips to nearshore wrecks are producing scattered bottom fish and sharks, as well as spanish mackerel on top.

Cameron, of Little River Fishing Fleet, reports that offshore anglers are catching some good-sized wahoo and scattered dolphin. With water temperatures nearshore finally set to start dropping, look for the overall fishing to pick up.

King mackerel are holding out in the 10+ mile range and will do so until the bait migration pushes the kings onto the beaches.

Nearshore anglers are catching plenty of spanish mackerel and sharks. 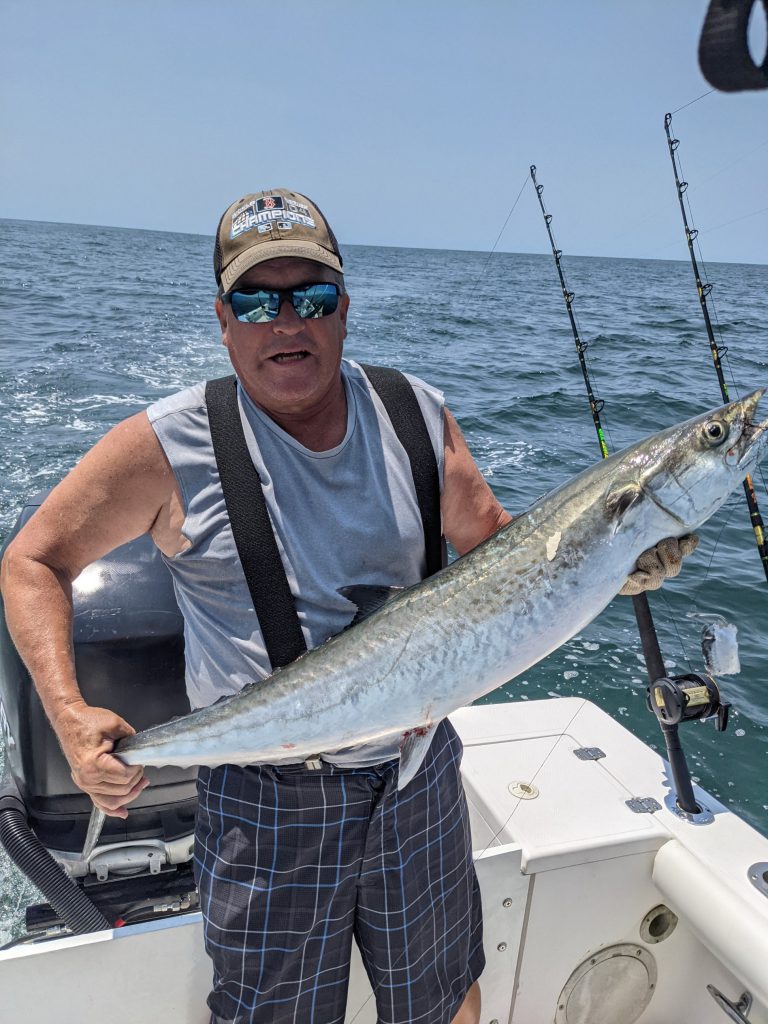 Rich Valpey, from Cape Cod, MA, with a 27 lb. king mackerel that was hooked on a ballyhoo while fishing out of Little River at the Jungle.

Michael, of Cherry Grove Pier, reports that bottom fishing remains the go-to strategy as the weather remains hot and muggy. A mixed bag of whiting and croakers are feeding on shrimp or squid on bottom rigs.

Spanish mackerel fishing has been hit or miss, with most being caught with casting jigs when feeding on the surface.

Over the next month, anglers anticipate seeing king mackerel moving back onto the beaches as water temperatures make a slight drop.

Lynn, of Apache Pier, reports that some good-sized flounder (to 6 lbs.) are being landed in deeper holes behind the breakers with live bait.

Whiting and croakers are being caught with shrimp, and the best action is early or late in the day.