Flounder fishing has been the newest addition, with some larger flatfish (up to 24”) being caught around Cherry Grove and Hog Inlet. Live mud minnows have been best, with action also being had from Gulp baits and Vudu shrimp.

Speckled trout are hitting on a variety of tide cycles. The key to action has been moving current and live shrimp. Look for these schools holding along ledges in 6-8’ of water with some sort of structure nearby. Anglers fishing at the jetties can rig live shrimp on slip floats and cast 15-20’ off the rocks.

Red and black drum can be caught out at the jetties, but most trips are having plenty of success on the inside around mainland creeks. Look for little holes and ledges to target on the lower tide cycles. Higher tides have spread the fish out and made it more difficult when fishing these creeks. Live shrimp has been best for both species, with dead shrimp on jig heads and Gulp shrimp also getting strikes.

Nearshore reefs (out to 3 miles) are holding good numbers of spanish mackerel. Trolling Clarkspoons and casting jigs have been working great in getting strikes. 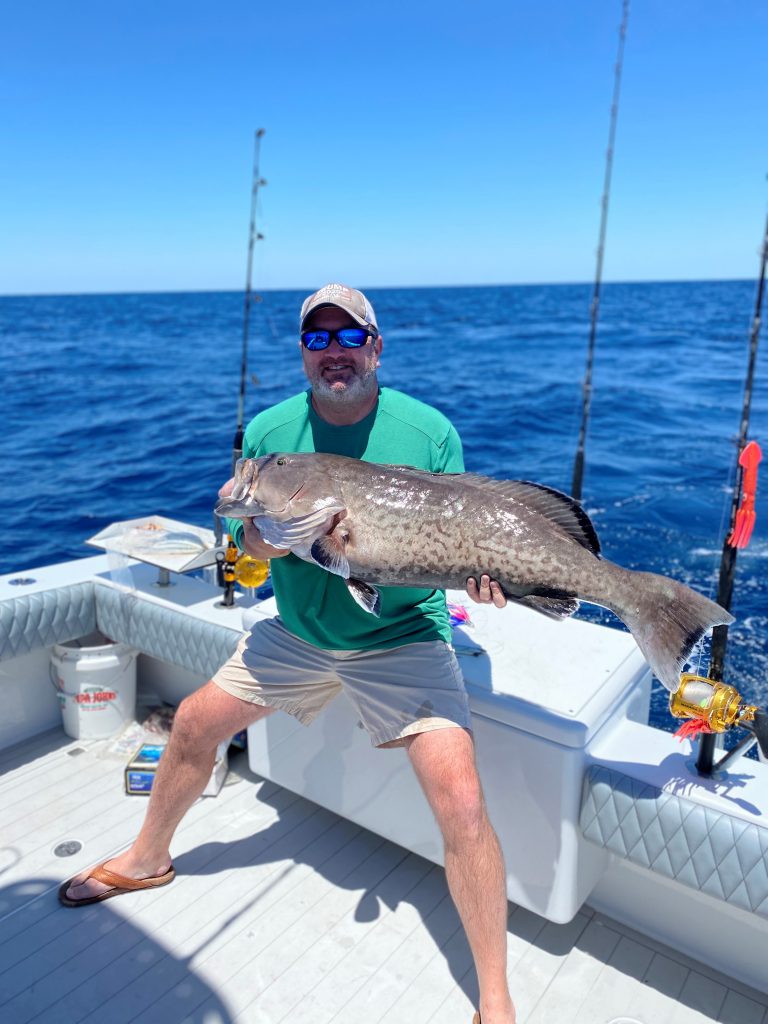 Allen Johnson, from Elizabethtown, with a grouper that was caught with a live pinfish in 225′ of water. He was fishing the Gulf Stream off Murrells Inlet.

Bob, of Strange Magic Fishing Charters, reports that the bite has been mostly good but erratic with the temperature and humidity swings. One day will be productive, but the next day at the same time of the tide and same location, the fish will have lockjaw.

Flounder have moved in, with larger fish and better numbers being caught. Targeting the lower end of the tides and looking for deeper holes near confluences of creeks has been productive. On higher tide cycles, focus efforts along creek banks. Bottom-rigged live minnows and Gulp baits pinned to jig heads are go-to setups for the flatfish. Anglers should remember to follow the bait as it goes up into the marsh with a rising tide and drains out on a falling tide.

Speckled trout are in a lot of the same places as the flounder. Live shrimp on a popping cork really works well if you can find some, but jig heads with soft plastics will also produce strikes.

Redfish are scattered but mostly staged around areas with structure. Where oyster shell banks transition to grass is a great place to start. A variety of live minnows, cut bait, and fresh crab and shrimp will work for the redfish.

Black drum are hanging out around inshore docks. It has been beneficial to target the docks that are a bit different. Docks that are longer, shorter, older with more growth, first or last in a long line, adjacent to other structure, and/or near creeks or marsh drains are all good places to try. On higher ends of the tide, work the whole dock. On lower tides, focus more at the ends of the docks. Any bait with a shell and scent will attract the black drum, and look for steadier, stronger bites versus the “machine gun” type of bite associated with small, non-target species.

Larry, of Voyager Fishing Charters, reports that recent trips have been finding tons of offshore bottom fishing action. Most trips have been targeting structure in the 125’+ depth range, with a variety of cut baits from squid to sardines all getting hits. Large grouper, beeliners, grunts, and triggerfish have all been part of the mixed bag coming over the rails.

A few good-sized cobia are staged over these structured areas, and they’re hitting larger cut and live baits.

The trolling action has also been solid, with catches of wahoo and blackfin tuna showing up around the Steeples and Blackjack areas.

Wind has been a major factor recently on the offshore trips and has factored into the numbers of mahi and king mackerel in the daily counts. The end of spring tends to see a stabilizing pattern of weather, and that is great news for the offshore fishing.

Inshore trips have been catching plenty of spanish mackerel now that they are settling into the region.

Fishing around structure is producing black sea bass and some sharks. 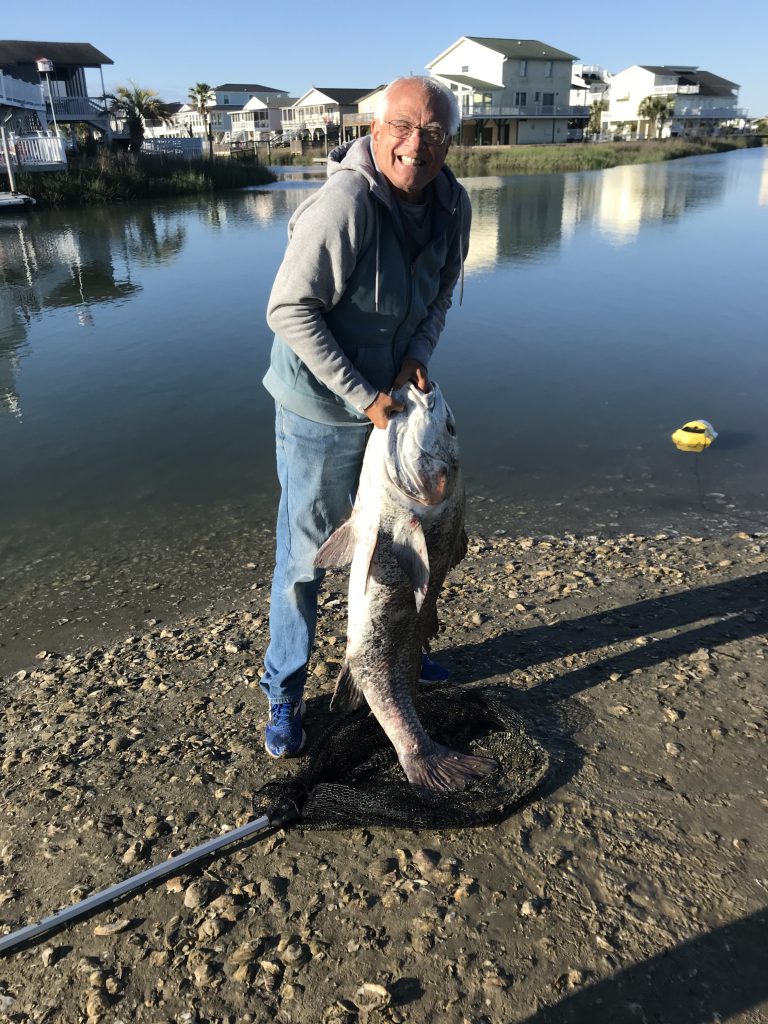 Ron Whitener, from Little River, with a 48” black drum (released) that hit a mud minnow in the Cherry Grove area.

Michael, of Cherry Grove Pier, reports that bottom fishing has been best since the last front came through. Whiting are being caught with bottom-rigged fresh shrimp.

Spanish mackerel (up to 6 lbs.) and bluefish are hitting casting jigs thrown towards surface-feeding schools.

Good numbers of flounder have pushed in around the pier. Many have been smaller, but some larger (up to 24”) flatfish are in the mix.

Lynn, of Apache Pier, reports that bottom fishing has been steady, with plenty of whiting being caught on fresh shrimp.

Anglers are finding more and more spanish mackerel pushing tight to the beaches as the water temperatures warm. Sight-casting Gotcha plugs and casting jigs are best for working these feeding schools.

Bluefish are being caught by the same casting methods.

With the winds laying down, anglers expect to see some king mackerel showing up over the next few weeks.