Kaleb, of TW’s Bait and Tackle, reports that spring fishing is just starting to pick up now that weather changes are happening along the coast.

Speckled trout have been showing up in the sound for anglers fishing soft plastics around Stumpy Point and the Little Bridge.

A few puppy drum are being seen around the inlet, though it’s a bit early to be targeting these schools on the flats.

Over the next month, speckled trout should get more prevalent. This first push of trout action will be just inside the inlet, and then the schools flush out and spread along the beachfronts. Look for these groups of trout to stage up in deeper holes near piers and between the sandbars.

Bridgette, of Oregon Inlet Fishing Center, reports that tuna are out there in good numbers when the weather breaks enough for boats to get out.

A mix of yellowfin, blackfin, and scattered bluefin tuna are coming back to the docks. Early spring is typically great for tuna fishing, and they will dominate reports throughout the month.

A few early mahi and scattered wahoo could be caught by the end of the month, but that action is very dependent on conditions. 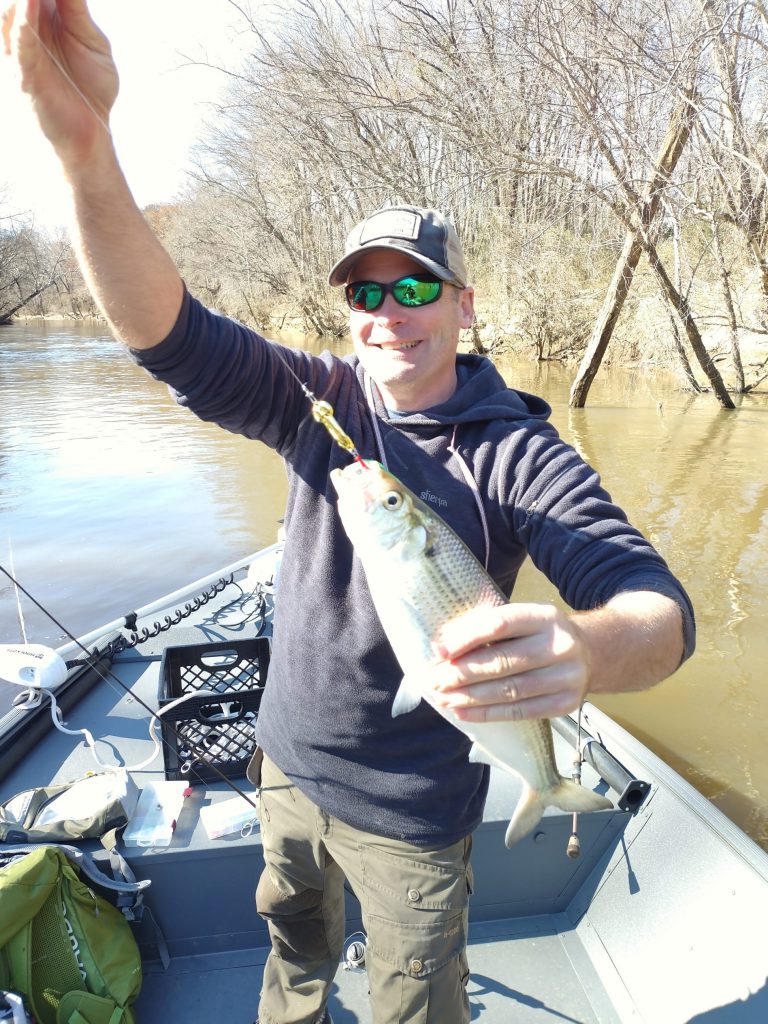 David Griffin, from Holly Springs, with a white shad caught on a crippler spoon in the Tar River. He was fishing with Capt. Joey VanDyke of Fingeance Charters.

Aaron, of Carolina Sunrise Charters, reports that April is a highly anticipated month along the coast as anglers begin to see big changes in the fishery.

The changes start with most of the inshore speckled trout and red drum spots producing action. Keep an eye on the weather, and target efforts during high pressure cycles and warm afternoons. Water temperatures climb throughout these periods, and this rise in temps gets these early spring fish feeding.

Look for both trout and redfish to be holding in the 2-8’ depth range. Z-Man soft plastics (3”) on 1/4 oz. or lighter 1/8 oz. jig heads are a go-to setup. Adding a bit of Pro-Cure scent is a great alternative to the Gulp-scented plastics.

If the fish seem to be holding along shallower ledges, switch over to popping cork setups with 18” leaders or topwater plugs.

Sight-casting action for the bull red drum could start anytime during the month, as long as weather patterns hold stable. These schools will be holding around shallow sandbars inside the inlet, and they make for great action when finding them.

Jason, of Fishing Unlimited, reports that causeway anglers are landing smaller striped bass around the pilings with cut baits and soft plastics.

A few speckled trout are mixed in the counts. As the sound water temperatures rise, so should the trout action.

A couple of smaller puppy drum are feeding on bottom-rigged baits.

Laurie, of Pirate’s Cove Marina, reports that it has been all tuna fishing action over the last few weeks and going into April. Trips are returning with boxes full of yellowfin tuna, as well as some bonus blackfins.

Another northeast weather pattern can slow trips for a week, but the bite should pick right back up with the weather stabilizing.

A couple of stray bluefin tuna have been hanging around and are still a possible catch for a little longer.

Wahoo are another species that could be seen more mixed in by the middle of the month.

Ryan, of Avalon Pier, reports that the water is still cold, and skates continue to feed on the bottom-rigged baits.

Sea mullet are beginning to slowly come into the daily counts. As more anglers take advantage of better weather, there will likely be more sea mullet being caught. The water temperatures rising will be a huge factor in seeing the schools push up from the southern Hatteras beaches. 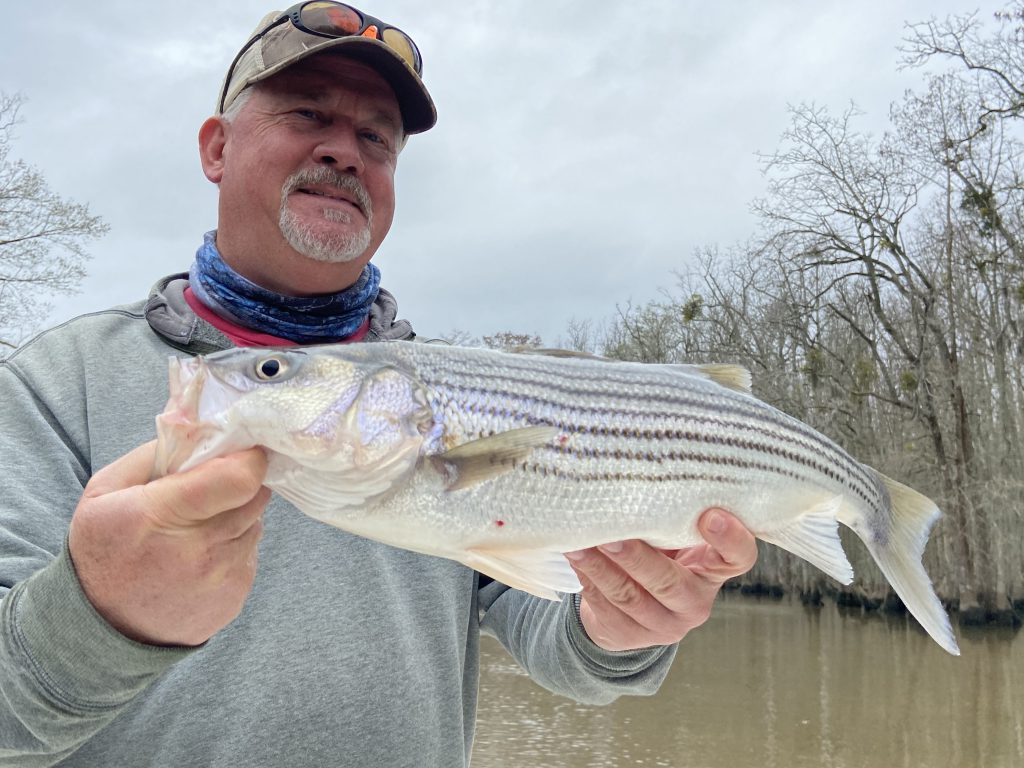 Stuart Creighton with a rockfish caught on the Roanoke River using a 5″ white fluke. He was fishing with Capt. Mitchell Blake of FishIBX.

Paul, of Bob’s Bait and Tackle, reports that the recent northeast weather systems were a bit of a push-back for the northern Outer Banks surf anglers. Most of the recent action is still down on Hatteras Island.

Some keeper red drum are being hooked in the sound with cut shrimp.

With surf temperatures in the upper 40s, it won’t take too much of a warming weather pattern to push fish into the area. April sees sea mullet and pufferfish arrive first for those fishing with bottom rigs. Not far behind are speckled trout and bluefish, as they feed in deeper holes between the sandbars.

Jeff, of Albemarle Fishing Charters, reports that striped bass action has been great in the Albemarle region. As water temperatures rise, these schools are pushing from their winter structure in the sound to the rivers. Trolling and casting 3/4 oz. Rat-L-Traps is a go-to method for locating the schools.

As the month goes on, these stripers get more structure-oriented in the rivers and they hold along banks and ledges in search of an easy meal.