Madison, of TW’s Bait and Tackle, reports that surf anglers are finding plenty of action. Bottom rigs with fresh bait shrimp are producing blow toads, speckled trout, and a few nice-sized black drum (to 24”). In addition, puppy drum are being caught with cut mullet. Skates and dogfish sharks are also moving into the surf areas, and they’re feeding on the cut baits, too.

Sound side anglers have been enjoying some strong striped bass action while trolling and casting near pilings under the Mann’s Harbor Bridge, and speckled trout and puppy drum are holding along the grassy shorelines and deeper holes down towards the inlet.

Nearshore anglers are pulling up plenty of big black sea bass over structure.

Offshore fishing has been good when anglers find the conditions to get out. A mix of large yellowfin and blackfin tuna are coming back in the fish boxes, and a few scattered late season mahi are also being caught out in the warm waters of the Gulf Stream.

Through February, anglers will still find fish around despite the cold-water conditions. Getting out on the beaches to enjoy a mild weather day will catch skates, dogfish sharks, and scattered sea mullet. Anglers may also see some runs of puppy drum in holes along the surf zone. 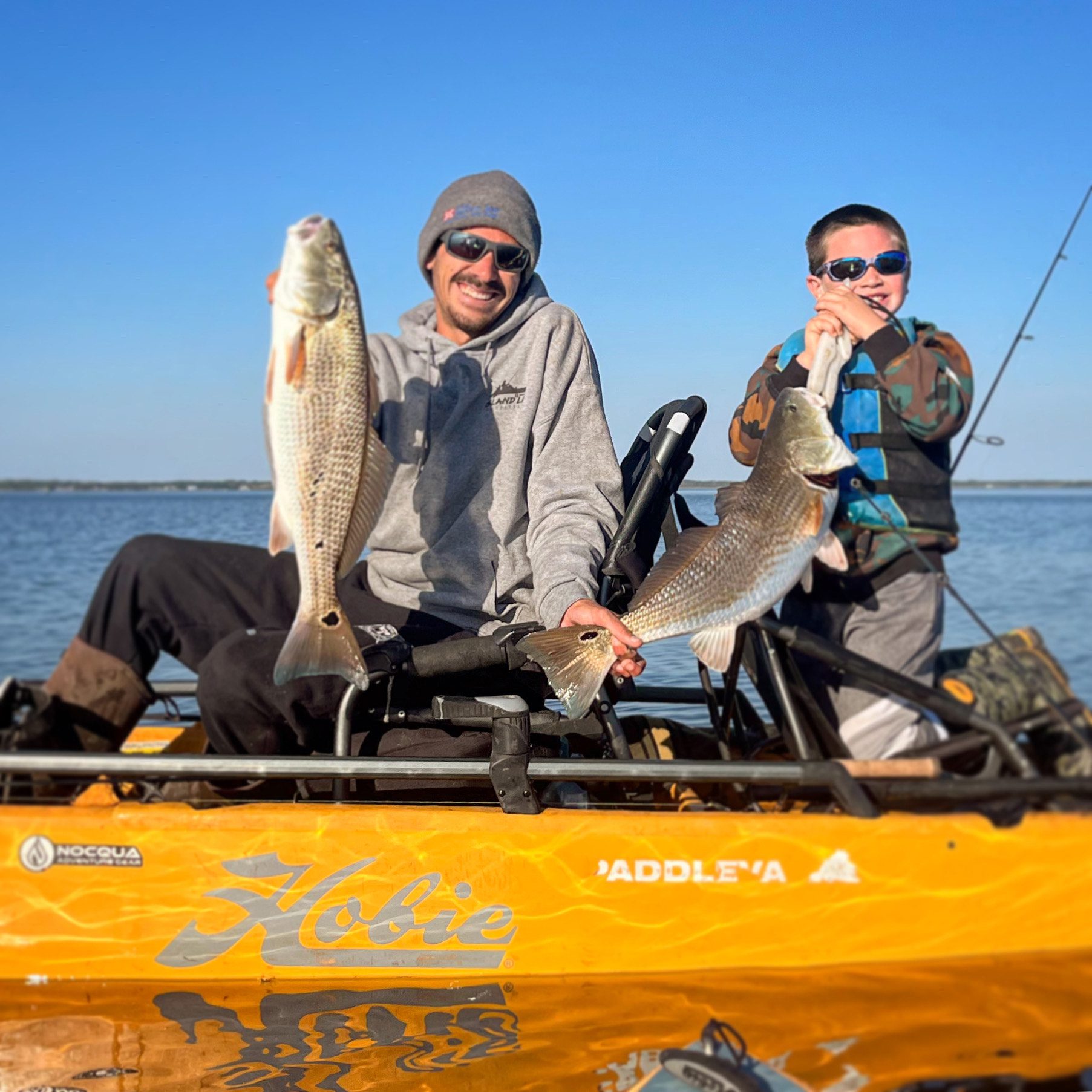 Mikey and his son, Brody Sabadic, from the Outer Banks, caught these red drum on Z-Man soft plastics fishing in the Kitty Hawk area. Photo courtesy of Island Life Outfitters.

Bridgette, of Oregon Inlet Fishing Center, reports that some good-sized yellowfin tuna have been coming in from offshore. Blackfin tuna and late season mahi are also mixed in the counts.

Nearshore structure has been loaded with triggerfish and black sea bass, and some schools of false albacore are still around in this nearshore range.

Inshore anglers have been catching red drum and speckled trout from holes around the inlet.

Going forward, look for tuna fishing to remain the main target of area anglers, as both yellowfin and blackfin should be present into January.

Aaron, of Carolina Sunrise Charters, reports that for inshore anglers, there’s been solid sound-side action on striped bass, speckled trout, red drum, and even some flounder.

Red drum are hitting topwater plugs and jigs fished on the shallow flats, and anglers fishing cut baits are finding action on both the ocean and sound side.

Speckled trout have been crushing the Knockin’ Tail soft plastics in holes from the sound down to the inlet.

Moving into winter, anglers will find success with MirrOdines that can be fished so that they slowly sink into the strike zones. The cooler water temperatures will slow the trout’s metabolism, and bait presentations will need to match this pattern.

Rockfish are being caught on a wide variety of baits, including Rat-L-Traps, Rapala Stretch 15s, live eels, and the “tried-and-true” bucktail jig.

Laurie, of Pirate’s Cove Marina, reports that tuna fishing has been good for mixed counts of large yellowfin and blackfin tuna.

A blue marlin release was made recently, and there are some other billfish still around offshore.

Mahi have mostly moved on, but once in a while there are stray fish mixed in the trolling bite.

Nearshore trips are coming back with good numbers of triggerfish and large black sea bass.

Inshore anglers are finding a good striped bass bite around the area’s bridges.

Wintertime anglers will continue to target yellowfin and blackfin tuna offshore, with the possibility of bluefin arriving, too, over the next couple months, if they once again migrate into the area.

Brian, of Nags Head Pier, reports that anglers are catching some bluefish with fresh bait shrimp.

Speckled trout have been running in the surf, and they are mostly hitting fresh baits.

Skates have started to move into the area and will be around all winter. Though they can be looked at as “pesky” in the warmer months, the skates provide some great action for anglers looking to wet a line in the winter.

Mike, of Avalon Pier, reports that anglers are catching some good-sized sea mullet when taking advantage of the great weather. Bluefish are also mixed in the daily counts.

Through February, a mild winter could see both sea mullet and bluefish stick around for anglers doing some bottom fishing.

Skates and dogfish sharks will push in more with cooling water temperatures. They can provide some great rod bending action to at least enjoy the outdoors. 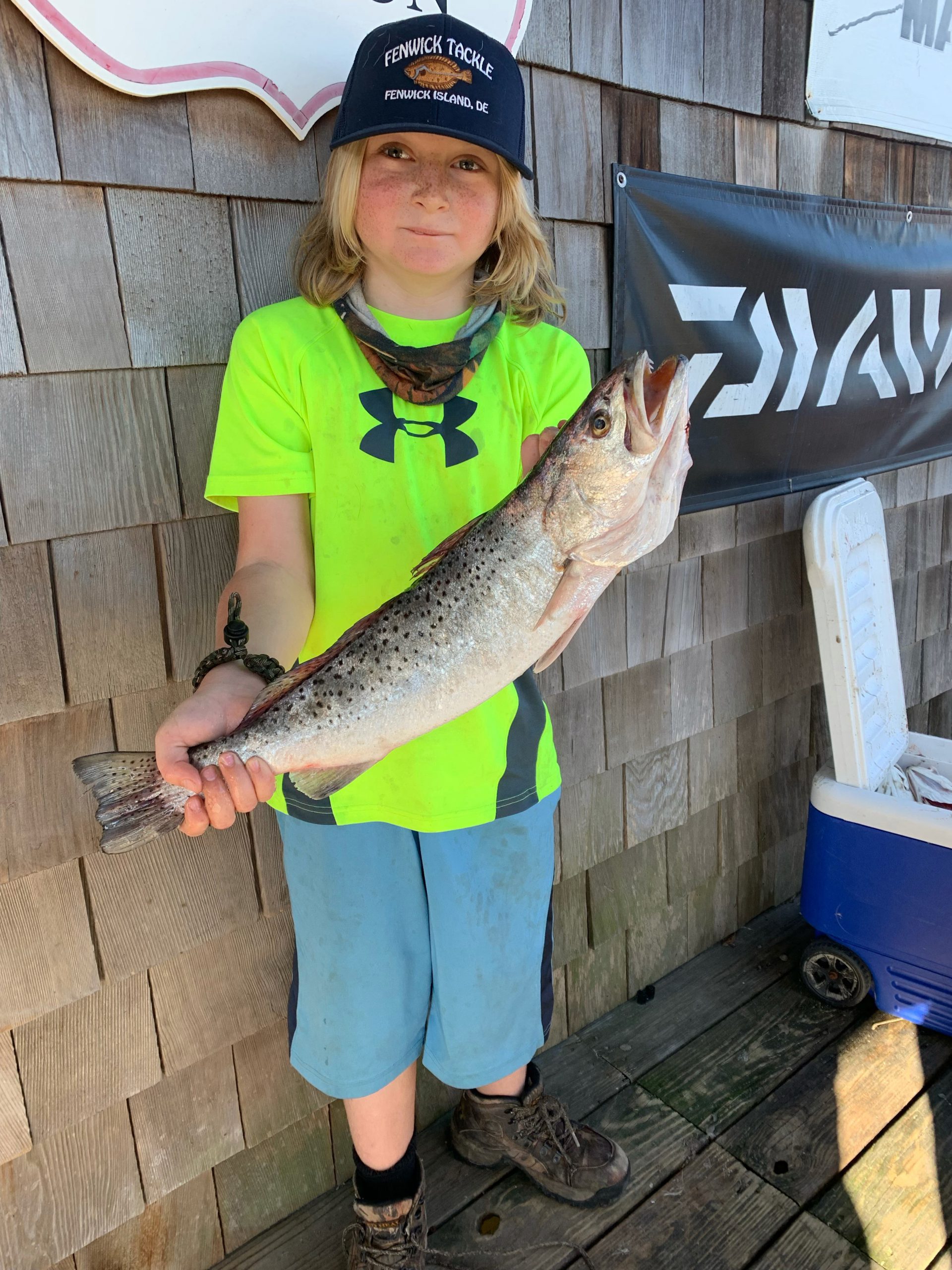 Yuri Noard caught this trout jigging soft plastics north of Rodanthe from the surf. He was fishing with Capt. Ian Lowdermilk of Hooked on Hatteras. Photo courtesy of Hatteras Jack.

Neil, of Bob’s Bait and Tackle, reports that striped bass fishing has been good for anglers fishing deeper, structured areas throughout the sound. This is a hearty fish species, even in the cold water, giving anglers a good target species going into these colder months.

Surf fishing action has remained overall good, even with water temperatures in the area steadily falling. Anglers out enjoying the good weather days are finding action from a mixed bag of red drum, bluefish, speckled trout, and dogfish sharks.

Nearshore anglers have been catching strong hauls of king mackerel while trolling live bait, and offshore boats have been finding good numbers of yellowfin tuna.

Jeff, of Albemarle Fishing Charters, reports that over the next few months area anglers look forward to targeting striped bass action as it picks up throughout the Albemarle Sound and its tributaries. These fish are hearty in the cooler water temperatures and provide a great alternate fishery for anglers looking to take advantage of mild weather days.

Even having a small keeper allowance hasn’t dampened anglers from searching for action around the area’s bridges and shoreline structure. Both trolling and casting a variety of hard baits will provide action in the coldest of months. This action will continue until the stripers begin their spawning transitions into the mainland rivers going into spring.