Hampton, of TW’s Bait and Tackle, reports that schools of spanish mackerel and bluefish have been consistently showing up around area piers.

Bottom fishing off the planks is producing sea mullet, triggerfish, and sheepshead.

In the surf, anglers are casting jigs at bluefish and spanish mackerel that move inside the breakers, and bottom rigs are working to land a mix of sea mullet, pompano, and puppy drum.

Nearshore trips are seeing spanish mackerel and bluefish in good numbers while trolling outside the inlet.

The dolphin action has jumped up in recent days, with the larger schools finally moved into the region.

Billfish releases are coming from anglers pulling large ballyhoo out in the Stream.

Bridgette, of Oregon Inlet Fishing Center, reports that mahi fishing has been spectacular, with plenty of fish hitting the docks at day’s end. Large yellowfins (up to 87 lbs.) and bigeyes (up to 210 lbs.) are also mixed in the offshore trolling action.

Nearshore trips are catching plenty of spanish mackerel and bonito while trolling.

Inshore anglers have been landing large speckled trout (up to 6 lbs.), and with summertime water temperatures now in play, there are plenty of puppy drum scattered throughout the sound. 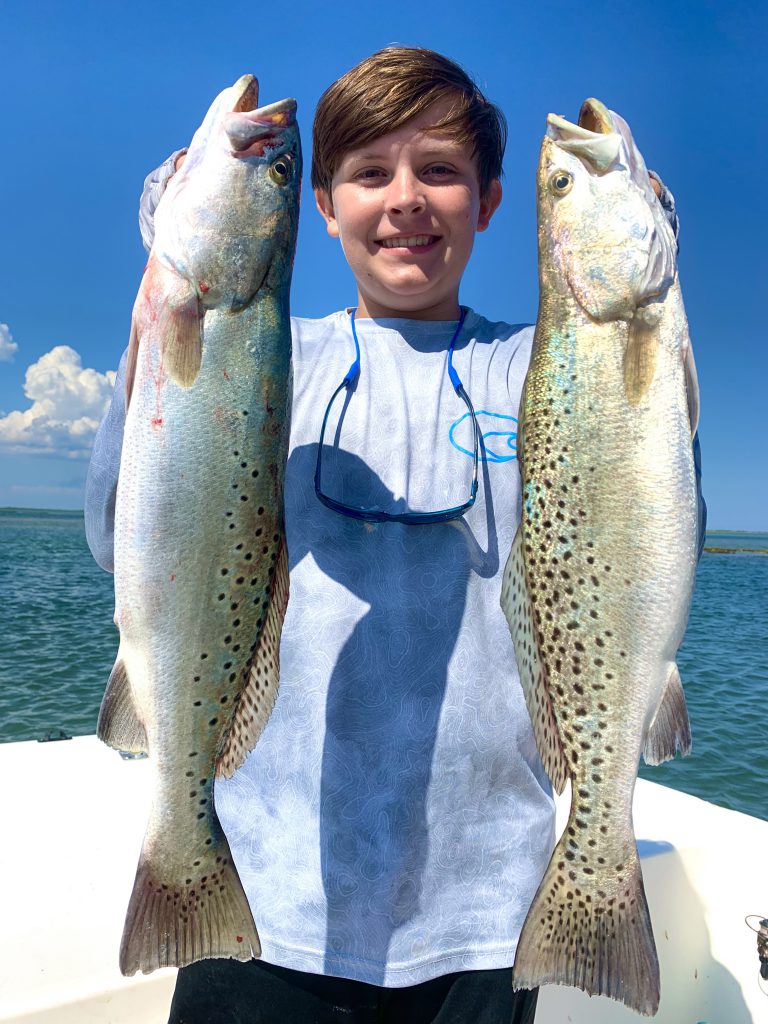 Liam Calabria with a pair of 22″ speckled trout that were hooked using a jig head and minnow. He was fishing Cape Lookout with Capt. Noah Lynk of Noah’s Ark Charters.

Laurie, of Pirate’s Cove Marina, reports that offshore trips are returning with plenty of mahi.

Large bigeye tuna (up to 177 lbs.) are mixed in the action as they are hanging around the area after the spring run.

Bottom fishing the deeper structure is producing limits of tilefish (up to 14 lbs.).

White and big blue marlin are being raised by anglers running deep and pulling bigger baits.

Nearshore action has been focused around the plentiful spanish mackerel and kings.

A few cobia are being caught by anglers working both the beachfronts and nearshore structure, and amberjack are moving inshore over these shallower structures as well.

Aaron, of Carolina Sunrise Charters, reports that red drum fishing has been great, with summer-time patterns now having the schools pushed up onto flats around the sound. A variety of Carolina-rigged live or dead baits and topwater plugs are getting strikes.

The speckled trout continue to join in on the action. Live baits are working best overall in getting a trout bite, and overcast days at the beach have been best for anglers looking for topwater action.

Sheepshead have moved in and are staged up around area bridges for anglers fishing sand fleas and crabs.

It’s also a great idea to stay rigged up with a bucktail jig as large trophy red drum and cobia are being caught by sight-casting at cruising fish.

Gerry, of Fishing Unlimited, reports that little bridge anglers have been doing well while bottom fishing. Some nice-sized spot are feeding on bait strips and shrimp.

Some speckled trout are mixed in, but most of the trout are just short. 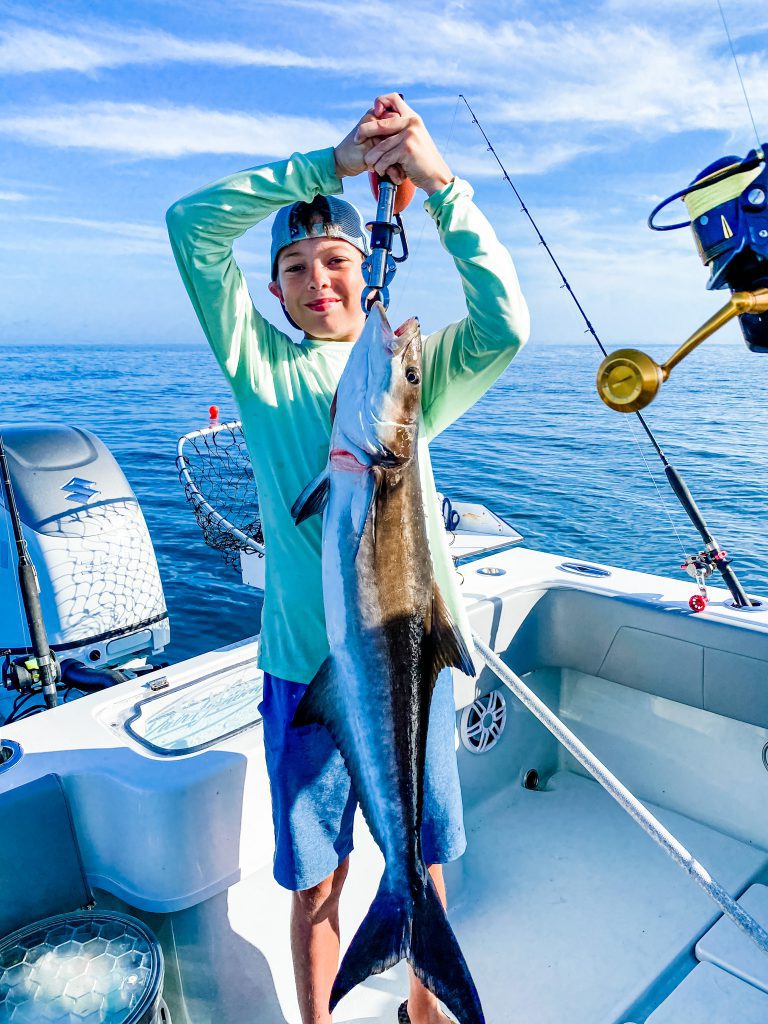 Braydon Murphy (age 13), from Clayton, with a cobia that fell for a brown Bowed-Up Mega Zig bucktail. He was fishing in 60′ of water off Nags Head with Capt. John Berquist of DrumBeat Charters.

Andy, of Nags Head Pier, reports that sea mullet are hitting bottom-rigged baits throughout the day.

Bluefish numbers have picked up a lot with bait now pushed along the beaches. When there are periods of clam wind, look for spanish mackerel to be caught more often as they target the schools of concentrated baitfish.

Speckled trout are also being caught more when the seas are calm.

Justin, of Avalon Pier, reports that bottom fishing has been the best action now that summertime temperatures are settling in. Croakers and sea mullet are hitting smaller baits on bottom rigs.

Bluefish are feeding on the surface and striking Gotcha plugs cast near the action.

A few spadefish are showing up around the pier pilings.

Neil, of Bob’s Bait and Tackle, reports that anglers headed to the surf are focused on the bottom fishing action. A mix of spot, sea mullet, and croakers are hitting bloodworms and fresh shrimp pieces on bottom rigs.

A few nice-sized speckled trout have been holding over in the deeper holes after their late-spring run, and red drum are feeding on fresh cut finger mullet and shrimp.

Groups of spanish mackerel are following baits into casting distance of anglers rigged with spoons and glass minnow jigs.

Anglers making trips into the sound are finding the speckled trout action to be hot. There are some large citation-class fish mixed in, and many anglers are finding their limit of fish.

Puppy drum are being caught on both cut baits and artificials.

Jeff, of Albemarle Fishing Charters, reports that redfish action has been pretty good in the Albemarle Sound. Drier conditions over the next few weeks should see more bait pushing north and seeing the smaller groups as more often. Soft plastics, spoons, and cut bait are all producing bites.

Some striped bass are mixed in, especially for anglers fishing around structure, and flounder are being caught when fishing baits along the bottom.