Bottom rigs tipped with shrimp or mullet are catching puppy drum, speckled trout, and sea mullet from the beach.

Pier anglers are catching bluefish and spanish mackerel with Gotcha plugs. With fish around the piers, it is only a matter of time before they come within casting distance of anglers on the sand.

Nearshore boats are catching cobia as they migrate through the area. Anglers anticipate more comfortable weather days to go searching for these surface-cruising schools.

Offshore fishing has been awesome, with large bigeye tuna, yellowfins, and blackfins all hitting the docks.

Dolphin are around, and the fishing should only get better as more schools move into the area. 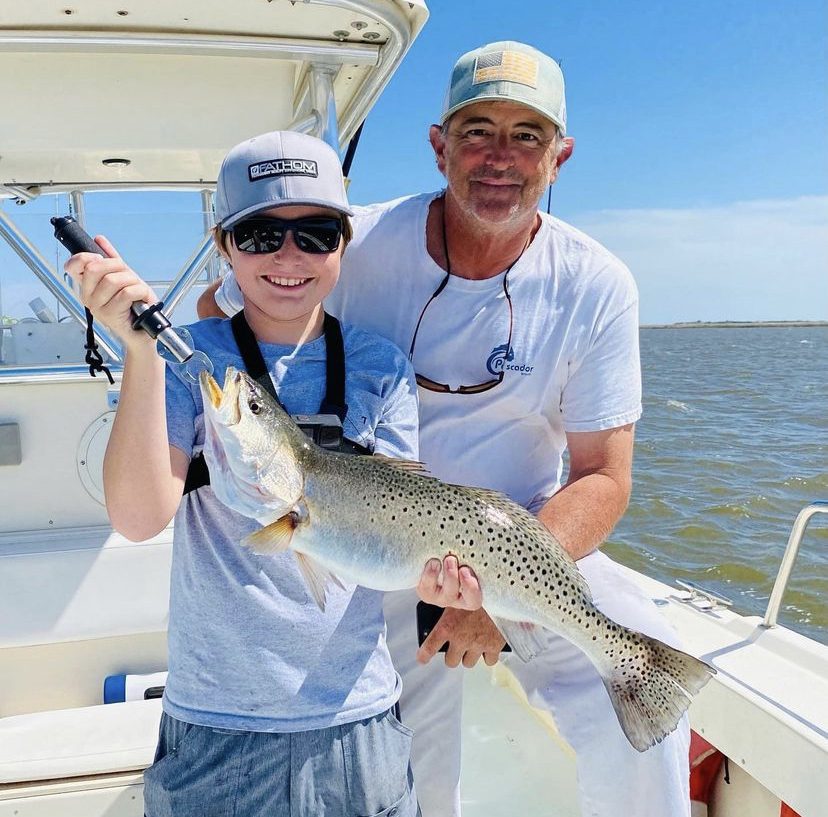 Brown Gaddy with a speckled trout that was hooked on a fish finder rig with cut mullet in the Roanoke Sound. He was fishing with Capt. William Ross, of Reel Thang Charters.

Bridgette, of Oregon Inlet Fishing Center, reports that some boats are getting limits of mahi now that the schools have started their late spring push into the region.

Large yellowfin tuna (up to 149 lbs.) and scattered wahoo (up to 64 lbs.) are mixed in with daily dock counts.

Billfish have made an early push into the area, with both blue and white marlin releases.

Nearshore trolling trips are bringing in bluefish and spanish mackerel, and bottom fishing these nearshore structures is producing black sea bass and tilefish.

Inshore trips are catching their limits of speckled trout and redfish.

Aaron, of Carolina Sunrise Charters, reports that speckled trout fishing has been red hot for anglers casting soft plastics on both jig heads and under popping corks.

Red drum action inshore has picked up greatly now that water temperatures are on the rise. The soft plastic rigs are also most productive for the redfish.

Sheepshead have started to move into the inlet and are staging up around structured areas. Sand fleas are great when targeting these great-eating fish.

Jimmy, of Fishing Unlimited, reports that little bridge action has been picking up a lot with sound-side water temperatures rising. A mix of speckled trout, puppy drum, white perch, and black drum are all hitting bait-tipped bottom rigs.

Casting jigs are producing bluefish and some spanish mackerel.

Tuna fishing has been hot, too, with large bigeyes (up to 109 lbs.), blackfins, and yellowfin tuna (up to 91 lbs.) mixed in the dock counts.

Good-sized wahoo and king mackerel are rounding out the fish box holdings, and boats are generating white marlin releases on recent outings.

Andy, of Nags Head Pier, reports that spanish mackerel and bluefish are hitting metal casting jigs thrown at the schools feeding on bait on the surface.

Bottom-rigged baits are catching flounder and some smaller rockfish.

Justin, of Avalon Pier, reports that fishing is starting to pick up as weather conditions are allowing more fishable days.

Bottom fishing has been best so far, with catches of flounder and sea mullet.

Anglers in the upcoming months should always be rigged with casting jigs for when spanish mackerel breeze by the pier and are surface feeding on bait schools. 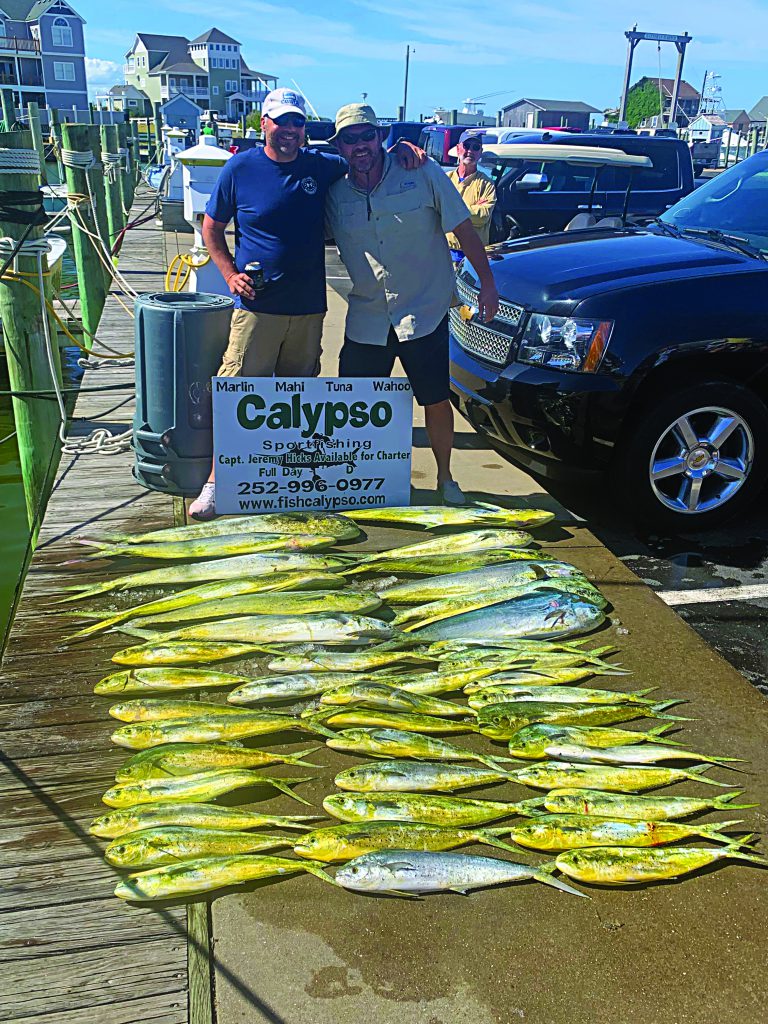 Bill and Matt Ruth with a catch of gaffer mahi caught on ballyhoo/Sea Witches and smaller mahi caught bailing with chunk bait. They were fishing a weedline in 60 fathoms with Capt. Jeremy Hicks of Calypso Sportfishing out of Hatteras Harbor Marina.

Neil, of Bob’s Bait and Tackle, reports that surf anglers on the northern beaches are catching sea mullet, spot, and croakers on bottom rigs tipped with bloodworms.

Speckled trout and the occasional flounder are feeding on fresh mullet, and anglers hitting the sand have been finding fresh natural baits to be key in a day’s success.

Jeff, of Albemarle Fishing Charters, reports that red drum action has been steady inshore. Warmer water temperatures mixing with little rain is allowing the salinity-sensitive species to push further up into the Albemarle sound region.

Surf anglers around Nags Head are seeing the bottom fishing action picking up with a mixed bag of whiting, puppy drum, spot, and blowtoads.