Hampton, of TW’s Bait and Tackle, reports that surf anglers have started to see plenty of change over recent weeks now that water temperatures are rising.

Bottom fishing is producing good-sized sea mullet and scattered pufferfish, and puppy drum are also being caught on bait shrimp or cut baits fished on the bottom.

Speckled trout action has been pretty good for anglers fishing soft plastics in deeper cuts between the sandbars. Getting on the sand both early and late in the day has been the most productive.

In the sounds, anglers are reporting speckled trout, puppy drum, flounder, and some scattered early flounder.

Bridgette, of Oregon Inlet Fishing Center, reports that blackfin tuna and scattered wahoo are being caught in good numbers on the deep water trips.

Yellowfin tuna action has been strong, with some boats returning after getting their quick limits.

Some early mahi are starting to arrive in the area. Over the next month, these fish become more commonplace in the counts as they migrate north.

Billfish are also starting to show, including a recent blue marlin release. 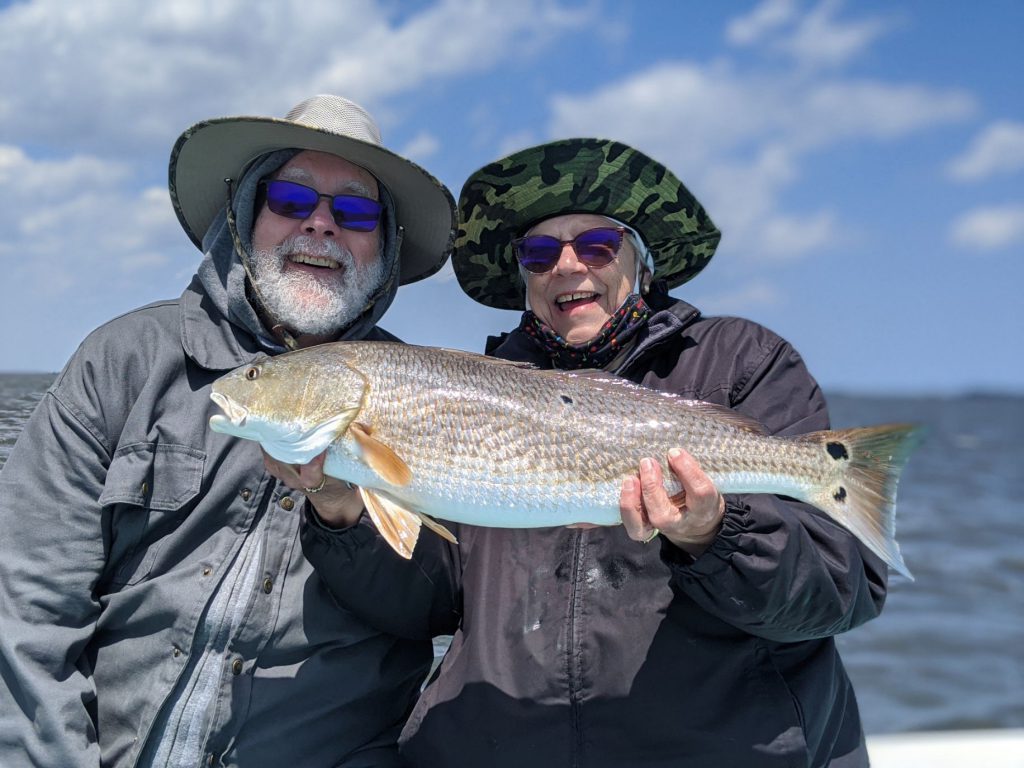 John and Jan Blalock, from Raleigh, NC, with a red drum caught using soft plastics under a popping cork in the sound. They were fishing with Capt. Aaron Beatson of Carolina Sunrise Charters out of Wanchese.

Aaron, of Carolina Sunrise Charters, reports that slot and over-slot red drum action has been very good in the sounds and out into the surf zone. Cut baits have been producing most of the action. Another successful tactic has been to drift the inshore flats with popping cork rigs and gold spoons.

Speckled trout are hit or miss in the sounds, with most of the schools pushed into the surf zone. Both lures and cut baits are producing bites when fished in the deeper holes between the beach sandbars.

A few puppy drum are being caught alongside the trout in the surf.

Good-sized sheepshead have moved into areas around the bridges. Target them with sandfleas fished tight to the structure.

Over the next few weeks, anglers are looking forward to more SW winds to turn conditions towards favoring the cobia bite to pick up. These fish will hang around the area well into June.

Hunter, of Fishing Unlimited, reports that little bridge anglers are catching speckled trout on soft plastics, and puppy drum are being caught by those fishing cut baits on bottom rigs.

The Nags Head surf zone has been seeing speckled trout (and a few puppy drum) being caught in holes around the piers.

Scattered blowtoads are in the mix for anglers fishing with shrimp.

Laurie, of Pirate’s Cove Marina, reports that yellowfin tuna action has been very good over the past few weeks.

A few blackfin are mixed in, including some citation-class fish, and large wahoo (up to 75 lbs.) are also being caught on the trolled setups.

Some gaffer-sized mahi are working their way into the daily dock counts. Going into May, look for these numbers to go up as the first big groups move in.

Hank, of Nags Head Pier, reports that bottom fishing has been a bit slow compared to past seasons. With the weather patterns looking to settle, expect to see improved action over the next few weeks.

Speckled trout are staged up in deeper holes behind the breakers. Both artificial baits and shrimp are producing some good-sized fish.

Cindy, of Avalon Pier, reports that speckled trout fishing has been steady, with schools pushed into deeper holes in the surf zone.

A few striped bass are in the mix for those anglers throwing soft plastics for trout, and bottom fishing has been producing sea mullet.

Puppy drum have started to move onto the northern beaches, and the action should keep picking up over the next few weeks. 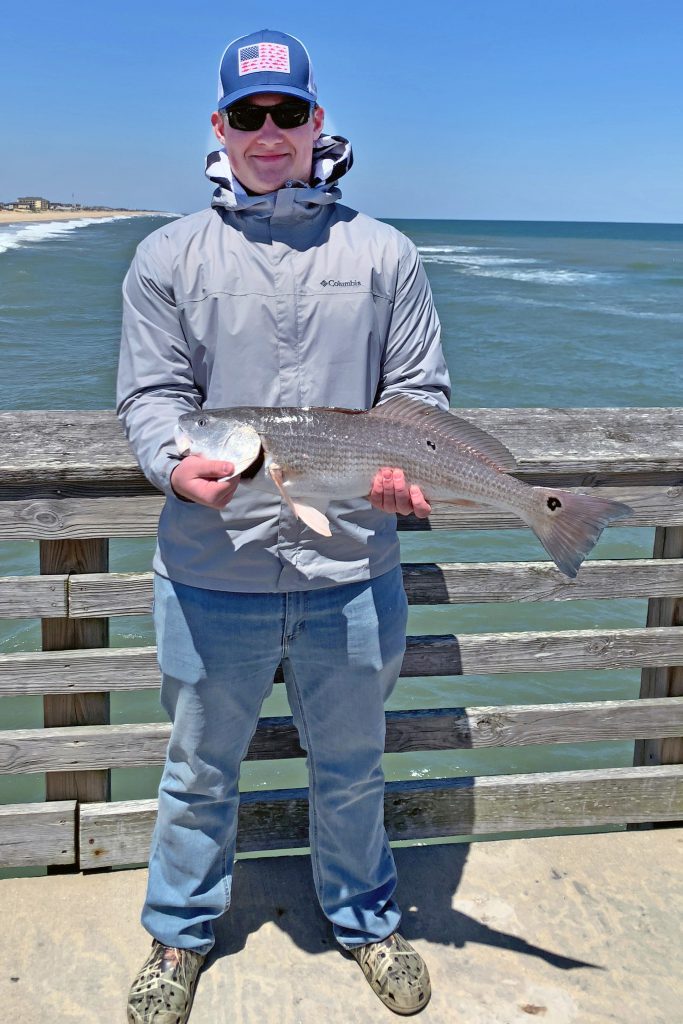 John, of Bob’s Bait and Tackle, reports that sea mullet action has been improving with surf temperatures starting to warm up, and scattered black drum are mixed in for anglers bottom fishing with shrimp.

A few pufferfish are hanging around, but they should be moving out over the next couple weeks.

Bluefish action has been hit or miss, as schools are just starting to filter into the area. As warmer weather becomes normal, look for the action to pick up.

Speckled trout have moved into the surf zone along the northern beaches. Getting on the beach early has been best, with quite a few good-sized fish sitting in the deeper cuts.

A few puppy drum are mixed in underneath the trout.

There have been a few large striped bass caught by anglers fishing artificial baits for the trout. This isn’t a consistent bite by any means, though.

Jeff, of Albemarle Fishing Charters, reports that striped bass are finishing up their spawn upriver. Over the next few weeks, these schools will be making their push down and back out into the sounds. In a post-spawn pattern, it is best to stay on the move, with both trolling or casting Rat-L-Trap and Rapala Husky Jerk plugs being great options. Look for deeper holes with structure nearby.

Out on the Nags Head area beaches, surf fishing has been picking up quickly. Whiting, spots, and croakers are hitting cut shrimp fished on bottom rigs. May is a great month for these bottom fish before the water gets too warm.