Madison, of TW’s Bait and Tackle, reports that surf fishing has been great. Bottom fishing has been producing almost all of the action, with mixed bags of sea mullet, spot, black drum, and some flounder all holding in cuts and on the sandbars.

There are pretty good numbers of puppy drum in the mix for anglers rigged with fresh cut bait.

Some speckled trout are starting to show up now that water temperatures are cooling. The trout action in the surf has just begun and only gets better as the fish move out of the sounds and along the beaches to feed.

Fishing in the sounds has been producing good numbers of speckled trout and puppy drum from around the inlet to areas up past Manteo.

Boats running offshore are returning with yellowfin tuna, mahi, and wahoo, and they’re also adding in some billfish releases. 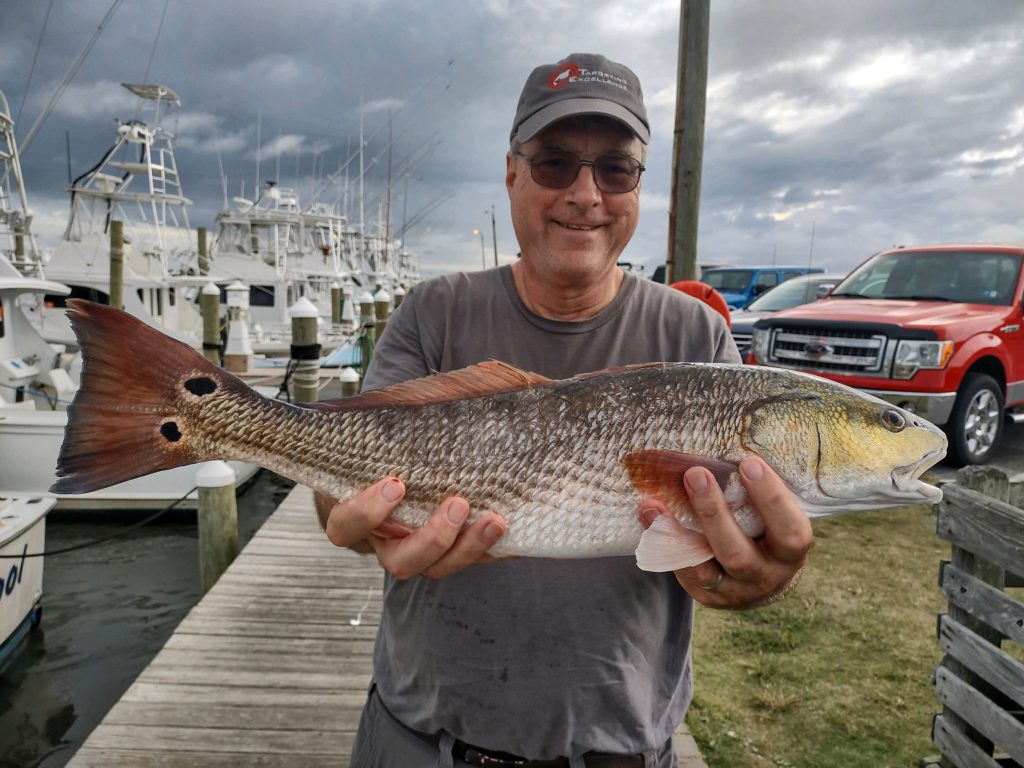 Dan Dailey, of Chambersburg, PA, caught this 27″ red drum in the Pamlico Sound on a trout jig. He was fishing with Capt. Aaron Kelly on the Southern Run.

For bottom anglers, the local structures are holding triggerfish.

The red drum bite has been spectacular, with anglers able to find slot-sized reds on flats, along grass banks, over grass beds, etc.

The bull red drum are moving out of the shallow inshore waters towards the inlets as they migrate south. Anglers are still able to find some big strikes while bottom fishing with cut mullet or any other similar fresh bait. Baits such as croakers, bluefish, and spot are all having success.

Anglers look forward to inshore topwater action popping off as cooler temperatures push the trout and reds around in search of bait.

Hunter, of Fishing Unlimited, reports that little bridge anglers have seen an increase in speckled trout action now that cold fronts are starting to pass through more frequently. A few puppy drum are mixed in the action for anglers fishing live bait.

The surf fishing action on the Nags Head area beaches has been great, with anglers catching good-sized sea mullet and red drum while bottom fishing.

Laurie, of Pirate’s Cove Marina, reports that nearshore trips have been doing great with the cooling water temperatures. Schools of large spanish mackerel (to 7 lbs.) and false albacore are feeding around bait balls just off the beach.

Offshore trips are seeing an increase in tuna action, with some large yellowfin (to 70 lbs.) hitting the docks. Good numbers of mahi and scattered wahoo are mixed in with the yellowfins. In addition, many boats are coming in flying both blue and white marlin release flags. 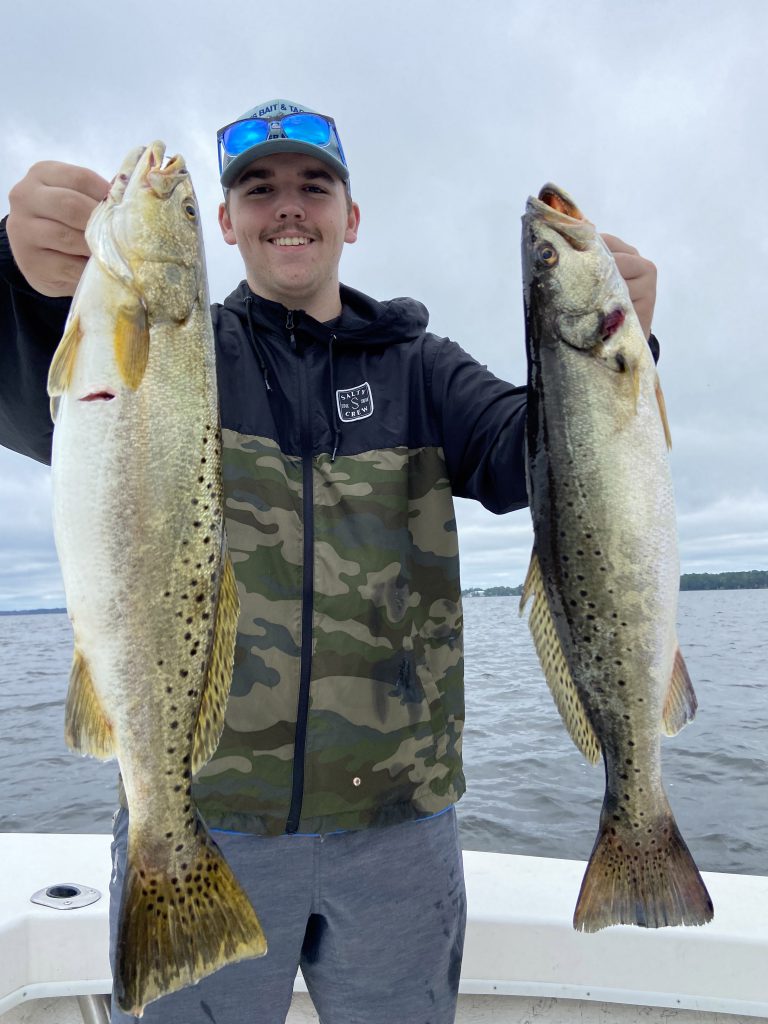 Brandon Evans holds up two speckled trout caught in the Neuse River on Rat-L-Traps. He was fishing with Capt. Mitchell Blake of FishIBX.

Brian, of Nags Head Pier, reports that anglers casting jigs are catching good numbers of bluefish and some spanish mackerel.

Puppy drum action has been picking up now that true fall conditions are settling in throughout the area.

A mixed bag of sea mullet, croakers, and other bottom species are being landed by anglers with fresh bait on bottom rigs.

The last cold front helped drop water temperatures a few degrees and, with that, anglers are now starting to find speckled trout with more regularity.

John, of Bob’s Bait and Tackle, reports that surf fishing has been great for red drum, with water temperatures in the area settling into more typical fall standards. There are quite a few big reds in the mix for anglers fishing Carolina-rigged cut baits from Corolla down to Duck.

A few nice-sized speckled trout (to 4.4 lbs.) have started to show up after the last cold front moved through.

Sea mullet (to 2+ lbs.) have been weighed in from anglers fishing bottom rigs. Plenty of smaller pompano are mixed in with the sea mullet.

Sound-side anglers have been seeing some good striped bass action.

Jeff, of Albemarle Fishing Charters, reports that striped bass fishing has been good for anglers targeting schools in the sounds and mainland river systems. Rat-L-Trap lures are a local favorite, with the heavier lures (3/4 oz.) keeping action in the lower water column being key to getting the most strikes.