Madison, of TW’s Bait and Tackle, reports that surf anglers are seeing action pick up now that water temperatures are cooling along the beach.

Puppy drum are making their way out of the inlets and along the sand as they follow the bait. Carolina rigs with cut baits have been working best, and days with rougher weather are seeing better fish numbers.

Schools of bluefish are surface-feeding on the same bait pods. Casting metal (glass minnow style) jigs at frenzied fish is providing most of the action, with a few also hitting cut baits.

Bottom rigs fished in the suds and out to the sandbars are producing sea mullet and some spot, and a few flounder and black drum are also scattered in the catches.

Bottom fishing from the piers is producing a mixed bag of flounder, spadefish, spot, sea mullet, and red drum.

Sound side anglers are seeing action picking up with all the inshore species. Trout and slot-sized red drum are the favorite targets for anglers working the grassy banks and ledges from Wanchese down to the inlet.

Nearshore trolling action has been strong, with a wide variety of ribbonfish, large spanish mackerel, bluefish, and false albacore all schooled up off the beach.

Offshore trips are catching tuna, mahi, and some larger wahoo, and water temperatures are still warm enough to see billfish (sailfish and blue marlin) in the daily dock reports. 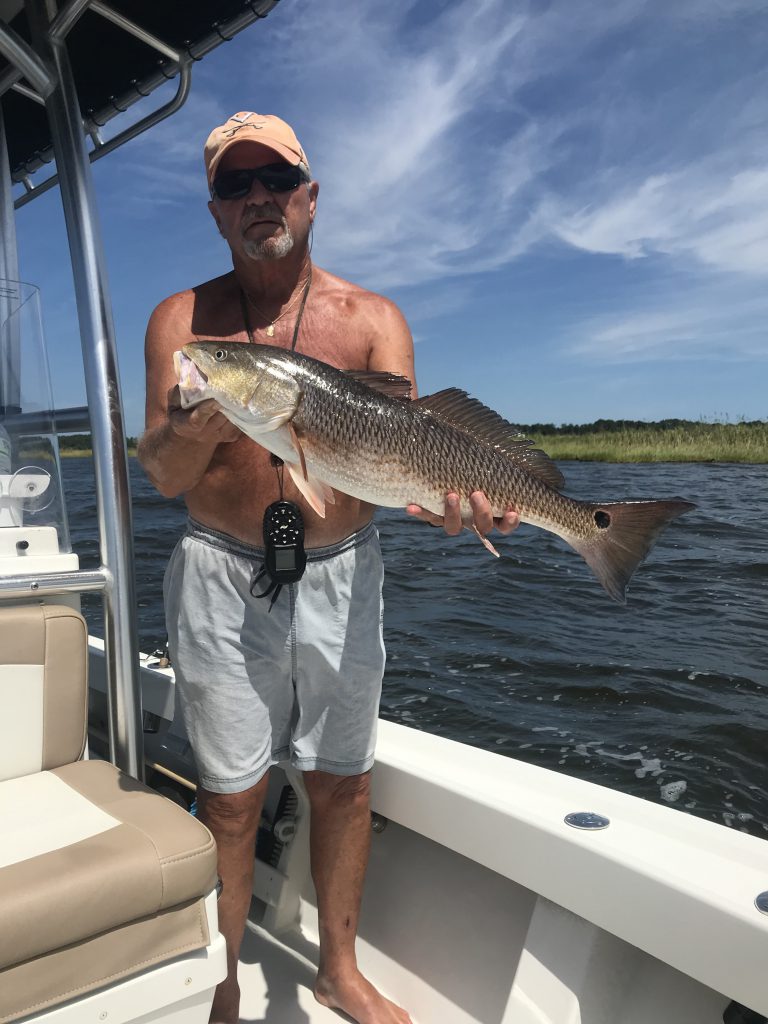 Coleman Holland, of Kill Devil Hills, with a red drum that was hooked on a homemade jig while fishing in the Croatan Sound.

Bridgette, of Oregon Inlet Fishing Center, reports that the offshore boats are doing great with the weather changes. A good mix of large blackfin tuna and yellowfins are moving in as water temperatures start to cool.

Quite a few boats are coming in flying billfish flags from released blue and white marlin, and scattered, large wahoo and some steady catches of mahi have rounded out the offshore action.

Nearshore trips have been finding good numbers of false albacore, spanish, and kings.

Inshore anglers are returning with limits of speckled trout, and they’re seeing plenty of bluefish hanging around the inlet, too.

Aaron, of Carolina Sunrise Charters, reports that it has been a pretty epic start to fall fishing now that water temperatures are cooling in the region.

Red drum action has been great for anglers working everything from the shallow flats to ledges and deeper grass banks. Popping corks while drifting inshore have these reds absolutely fired up.

Speckled trout fishing has been good all year, and going into the next few months, anglers are anticipating an even stronger fall season. Both live baits and soft plastics under corks will get the trout to strike.

Walter, of Fishing Unlimited, reports that anglers at the little bridge are starting to see action pick up as the season starts to change to fall.

A few speckled trout are showing up for anglers fishing live baits and soft plastics when the current is moving.

Some slot red drum are feeding on cut and live baits, and also mixed in with the Carolina rig action are scattered, throwback flounder. 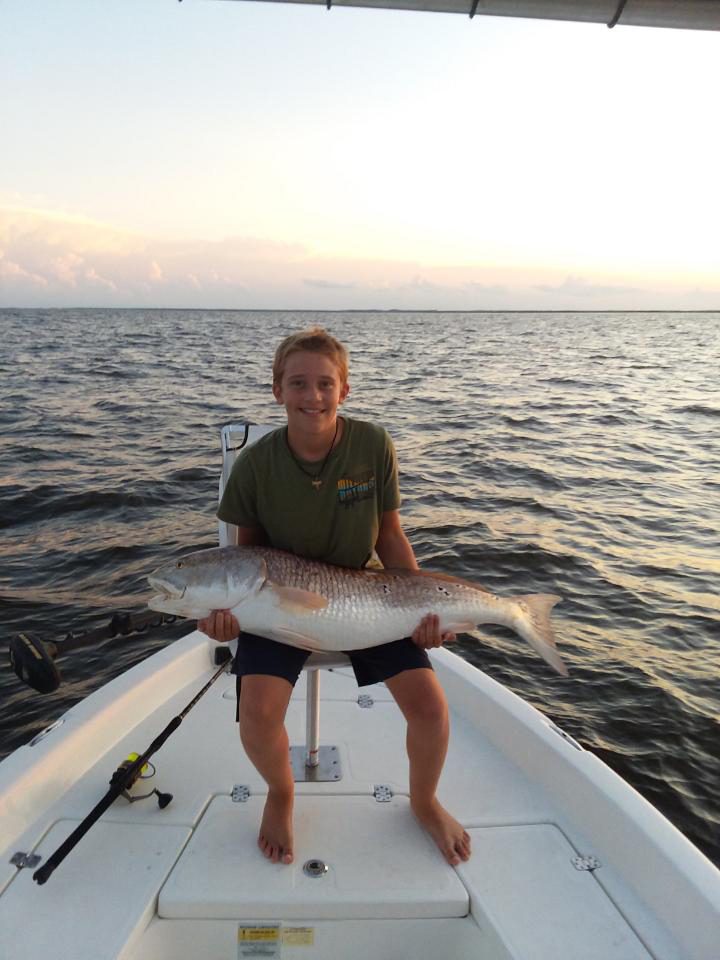 Braxton Davenport, from Washington, with a 45″ red drum. He was fishing with cut bait in the Pamlico Sound.

Laurie, of Pirate’s Cove Marina, reports that offshore fishing is starting to get stronger.

The offshore fleet has been returning with a mixed bag of wahoo (to 41 lbs.), blackfins, and yellowfin tuna.

Some boats are bringing in double-digits of slinger to gaffer-sized mahi.

Fall may be moving in, but the water temperatures are still warm enough to see billfish release flags, with anglers catching sailfish, blue marlin, and white marlin.

Nearshore charters have been doing great while trolling and casting spoons off the beaches. There are schools of false albacore, spanish mackerel, bluefish, and ribbonfish all actively feeding around the bait balls.

Jeff, of Nags Head Pier, reports that bottom fishing is picking up, with good catches of sea mullet and spot.

Schools of bluefish are surface-feeding on bait balls pushed around the pier, and some puppy drum are starting to be caught with more consistency now that water temperatures are cooling.

Bluefish are being hooked by anglers casting jigs around bait pods, and good numbers of spanish mackerel are being caught off the farther reaches of the pier.

Scott, of Bob’s Bait and Tackle, reports that surf side anglers have been focused on the good red drum action. Most of these are puppy and slot-sized fish, with anglers hoping to see a run on the over-slots and citation-class of fish when they migrate through the area.

Sound side anglers have been catching limits of speckled trout and slot red drum when working grass banks and ledges from Wanchese down to the inlet.

Nearshore anglers have had plenty of success trolling spoons for ribbonfish and spanish mackerel.