Madison, of TW’s Bait and Tackle, reports that bottom fishing has been great along the northern Outer Banks beaches. A mix of spot, croakers, sea mullet, pompano, and flounder are all holding in some of the deeper holes between the sandbars. Successful baits have varied from fresh shrimp and bloodworms to sand fleas and artificial bait strips.

Local pier anglers are also seeing spadefish and sheepshead on top of the other surf species.

Inshore anglers have been catching good numbers of speckled trout and puppy drum against grass banks from the inlet up to Nags Head. Soft plastics rigged on jig heads or under popping corks are both working well.

Flounder are mixed in, and soft plastics worked along the bottom are producing best.

Off the beaches, anglers are having plenty of success while trolling Clarkspoons for a mix of spanish mackerel, bluefish, and ribbonfish.

A few kings are scattered in the nearshore action, as they are pushing in closer to the beaches.

Offshore fishing has been good despite the hot conditions. Boats are experiencing limits of mahi, scattered yellowfin and blackfin tuna, wahoo, sailfish, and marlin species all being caught.

Some good-sized tilefish are also in the counts from anglers stopping to drop baits. 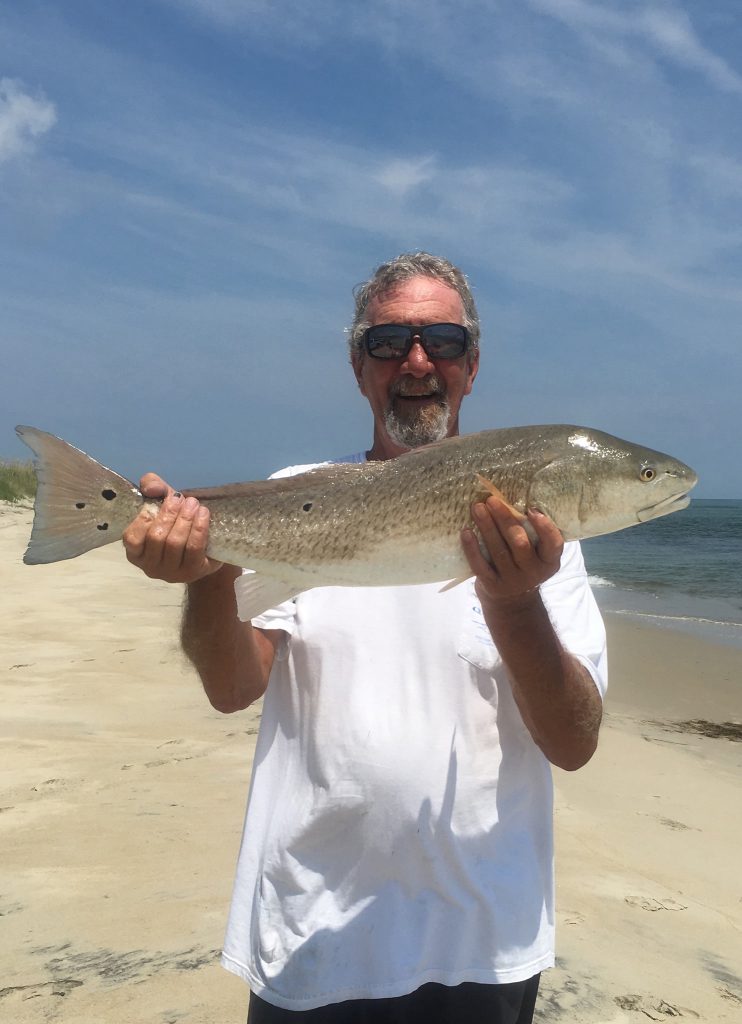 Joe White with a 33″ redfish that fell for a fresh mullet while he was fishing from the Nags Head surf. Photo coutersy of Oceans East Bait & Tackle.

Mahi action has been steady, with double-digit numbers regularly returning in the fish boxes.

The billfish action has been awesome, with releases of blue marlin, white marlin, and sailfish.

Black sea bass are loaded on the nearshore reefs and wrecks.

Aaron, of Carolina Sunrise Charters, reports that there has been a phenomenal topwater bite this month. Anglers have been very pleased to watch good-sized speckled trout and red drum hitting plugs in as little as one-feet of water on light tackle setups. It seems the shallower you go, the better the action has been.

Popping cork setups paired with Knockin’ Tail soft plastics have been great for red drum while drifting the flats. With some of the higher wind days, it’s been critical to make long casts and keep baits out in front of the drift.

Flounder are around and will respond to live baits or soft plastics.

Fishing around structure in the sound is great for steady action on good-sized sheepshead and black drum.

Off the beaches, bottom fishing at wrecks is producing triggerfish.

Billy, of Fishing Unlimited, reports that Little Bridge anglers have been catching plenty of smaller speckled trout, with a couple keepers mixed in.

Bottom rigs with fresh shrimp are producing black drum and some sheepshead.

The grass banks throughout the sound are holding good numbers of red drum. Size has varied, from smaller pups to yearlings.

Keeper speckled trout can be found along some of the deeper banks.

Laurie, of Pirate’s Cove Marina, reports that some citation-sized wahoo have started to be mixed in the offshore action, and large yellowfin tuna fishing has been and continues to be great.

Blue marlin, white marlin, and sailfish action has been good based on the amount of release flags flying as boats return to the docks.

Bottom fishing has been producing tilefish and large black sea bass, and nearshore anglers are catching spanish mackerel and ribbonfish. 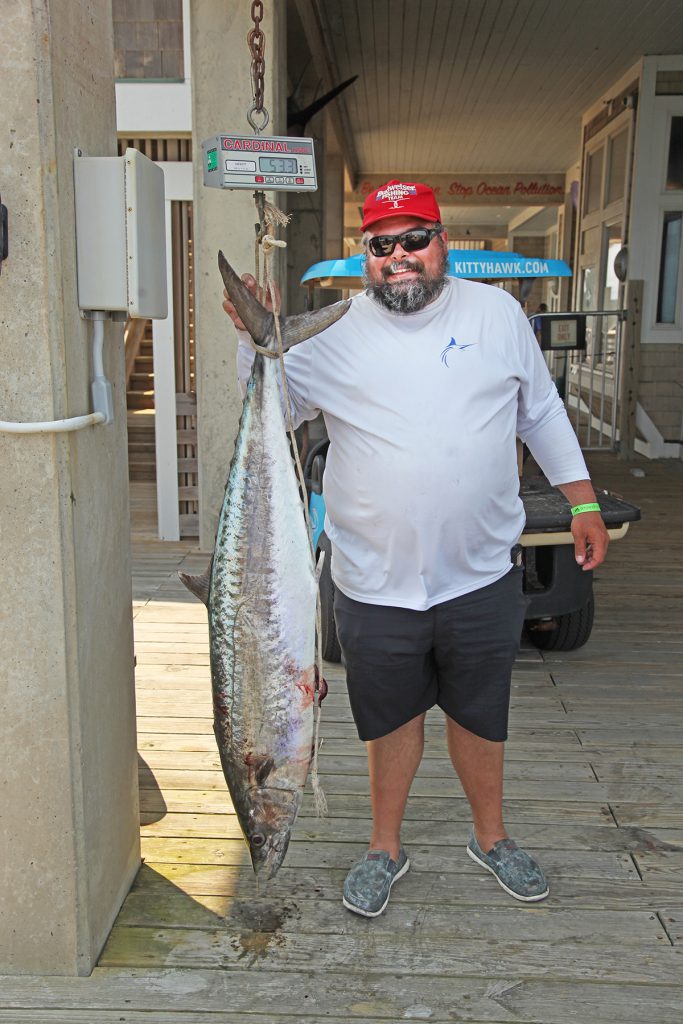 Andy, of Nags Head Pier, reports that the best action has been coming from anglers fishing live baits off the end. King mackerel, blacktip sharks, and a few cobia are all being caught.

Bottom fishing has been a bit slow with the higher water temperatures.

Justin, of Avalon Pier, reports that a few good-sized king mackerel (to 28 lbs.) are hitting live baits on the pin rigs.

Bottom fishing has been producing good-sized pompano, sea mullet, and a few spadefish.

Neil, of Bob’s Bait and Tackle, reports that surf anglers have been catching a good mixed bag of spot, sea mullet, and croakers.

Some good-sized pompano (to 3.5 lbs.) have been weighed from anglers fishing sand fleas on smaller bottom rig setups.

Spanish mackerel and bluefish moving inside the sandbars are striking at glass minnow style jigs cast at the feeding frenzies.

Jeff, of Albemarle Fishing Charters, reports that striped bass action will be picking up now that the weather has passed its mid-summer peaks. Target areas of structure that are holding baits with both hard plastic rattle baits and soft plastics.

A few red drum are up in the sounds, but a rainy summer has salinity levels fairly low. This has kept most action down around the Manteo area and south to the inlet.

Surf anglers have been catching plenty of bottom fish with fresh shrimp. Spanish mackerel and bluefish are moving within casting distance of the sand, likely due to bait being more prevalent right on the beach. Throwing casting jigs at these surface-feeding schools will produce some strikes.