Jeff, of Ocean Isle Fishing Center, reports that strong northeast winds have put a little damper on early spring fishing. With water temperatures in the upper 50s, speckled trout are homed in on MirrOlure MR-17s around the jetties. Live shrimp has been the favorite bait, though finding it hasn’t been so easy.

There are plenty of black drum and smaller red drum around oyster beds and channels in the creeks.

Nearshore anglers are finding black drum and gray trout at the local ARs, and some large red drum have been caught around structure in the 80’ range.

Over the next few weeks, anglers look forward to bonito and false albacore moving in before the spanish mackerel arrive.

Brant, of Ocean Isle Fishing Center, reports that April is a major transition month in the area, and with the Gulf Stream making big moves, it brings good opportunity to see a mix of wahoo and tuna. Last year saw a large increase of yellowfin tuna in the area, and anglers look forward to that fishery coming back again.

Blackfin tuna have always been prevalent in the region and should be expected to make another strong showing.

Mahi typically show up somewhere between the middle to end of April.

Bottom fishing is always an option, though many anglers don’t tend to target the bottom until grouper season opens.

Atlantic bonito should be showing up any day and will be surface feeding throughout the area until water temperatures jump above 68. These schools will be holding in the 30-60’ depth range, especially near structure.

Spanish mackerel will be right behind the bonito around the end of the month when water temperatures get in the upper 60s. This first wave of spanish are usually larger, good-sized fish.

The “schoolie” sized king mackerel show around this same time in the 50-100’ depth range. Target them over areas of structure that are holding bait. 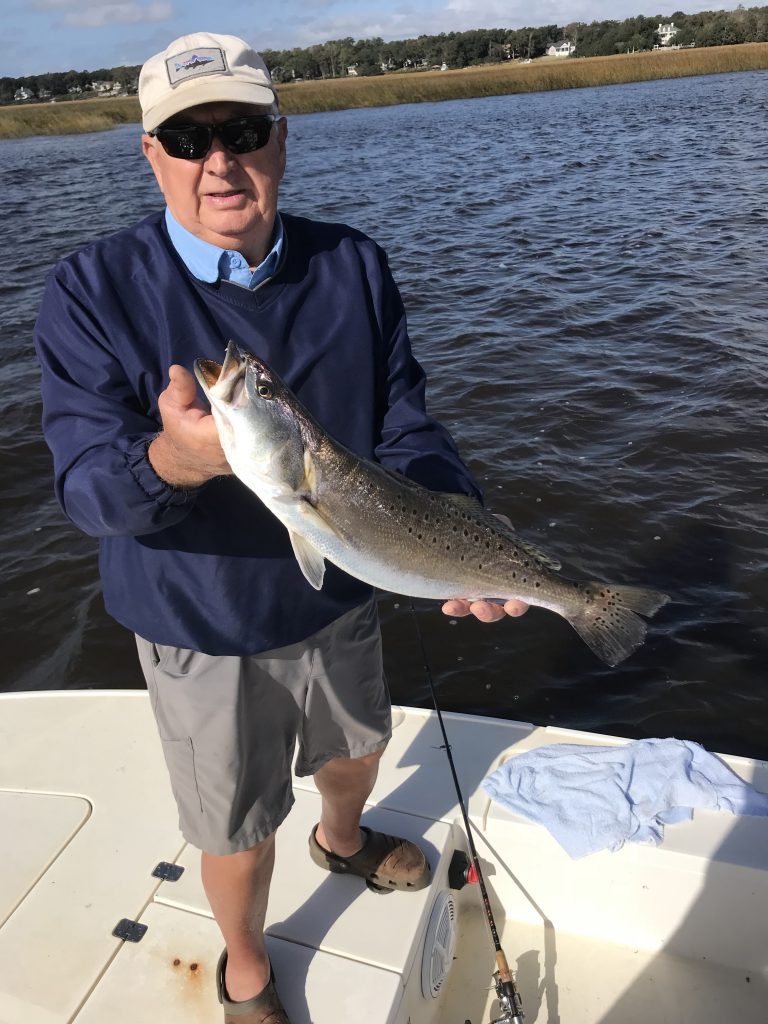 Kenneth Kendall with a 25″ speckled trout that he hooked fishing off a grass bank in the Little River area. He was fishing with Capt. Tripp Hooks of Capt’n Hook Outdoors.

Tyler, of Rigged and Ready Charters, reports that whiting have pushed into the inlet and are staged up in nearby channels to feed on the falling tide cycles.

Speckled trout action in the Sunset Beach area creeks has been phenomenal now that water temperatures in the sound are heating up. Live shrimp has been getting most of the action.

Nearshore action should be picking up in the next few weeks with the arrival of pogie schools. King mackerel will push into the 10-mile range, and they will be holding over structure and feeding on the bait schools.

Spanish mackerel will push towards the beachfronts. When not spotted on the surface, trolling Clarkspoons under #1 sized planers is a tried-and-true successful rig. The spanish prefer the baits sped up, with most strikes coming while running 7 mph.

Trip, of Capt’n Hook Outdoors, reports that the speckled trout bite is starting to pick up with waters warming up. Most trout are being caught on live shrimp fished around structure closer to the inlets, with rising tide cycles being most productive.

Red drum fishing has also been steady, with the schools now starting to push out of shallower creeks. It will be more productive to target docks and deep oyster banks with bait shrimp fished on jig heads or Carolina rigs.

There are black drum mixed alongside the redfish near structure.

Offshore, the bottom fishing remains good in the 65-100’ range. Black sea bass, beeliners, pinkies, and triggerfish are all feeding on cut squid.

Wahoo fishing is steady in the Gulf Stream, with fish being caught on both high-speed lures and ballyhoo.

Blackfin tuna and scattered sailfish are also mixed in along the break.

Tim, of Tideline Charters, reports that with water temperatures breaking the 60-degree mark, speckled trout fishing is getting really good. When you can find it, live shrimp has been producing best rigged under a float. If throwing artificials, MirrOlure MR-52 twitch-baits in the “purple demon” color has been productive. In a general sense, the larger trout are being caught near the inlets and nearby channels, with the winter holdover spots holding smaller fish.

Redfish are holding tight to oyster structure around the inlet. Both mud minnows and live shrimp fished under floats have been getting great strikes.

Look for all the inshore species to push onto shell bed structure as spring conditions settle in. 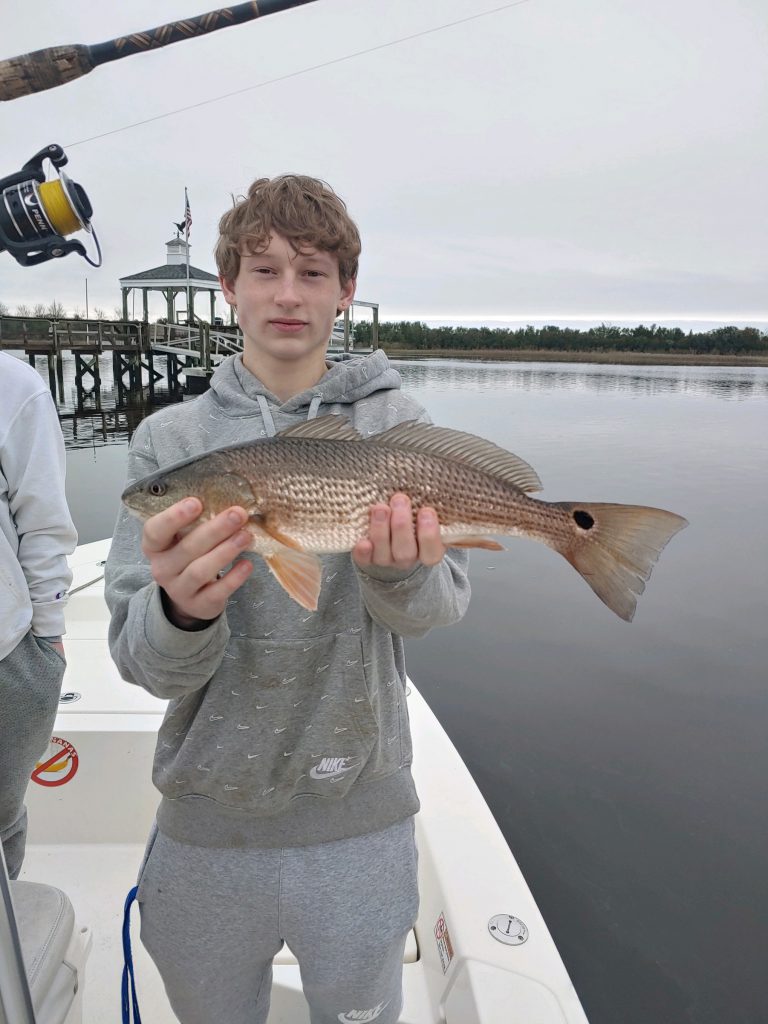 Tyler Mabe, from Mount Airy, NC, with a red drum caught using a mud minnow on a Carolina rig in the Sunset Beach area. He was fishing with Capt. Jeff Williamson of Get Busy Charters.

Hunter, of Rod and Reel Shop, reports that surf anglers are pleased to see the start of whiting action along the beaches.

Black drum are mixed in in the deeper surf holes and hitting shrimp on bottom rigs.

In the sounds, speckled trout are coming out of their winter slumber and feeding just about everywhere. From the backs of creeks and canals to the ICW or upriver, this action should pick up more as water temperatures rise.

There are red drum mixed in the inshore counts. These are mostly the resident fish that hold over all winter and hang around structure.

Going into the next few weeks, look for schoolie-sized bluefish (up to 14”) to be arriving in the area.

After the full moon cycle around the end of April, it’s probable that the spanish mackerel schools will start pushing onto the beachfronts.

Donnie, of Ocean Isle Beach Fishing Pier, reports that anglers are focusing their efforts on the bottom with shrimp-tipped rigs. This has been producing pufferfish and some whiting.

Over the next few weeks, the numbers of both whiting and puffers will go up as water temperatures rise to a more typical level for the season.