Jeff, of Ocean Isle Fishing Center, reports that speckled trout fishing has been good as these fish transition into wintertime patterns. Live shrimp has been a top bait, but as the trout pull off the beach, anglers are having success switching over to artificial soft plastics and hard suspending baits.

Redfish have started schooling up in the clear and colder water conditions, and they will move to shallow bays and flats to warm up and feed.

Going into winter, it’s all about speckled trout, black drum, and red drum. All three species will be found in mainland creeks and staged up in holes with nearby structure. Black drum will respond best to bait fishing, where the trout and redfish will fall for slow moving artificial baits.

All the species will feed best if temperatures overall stay mild, with cold stretches or freezing weather really making the fishing tough. 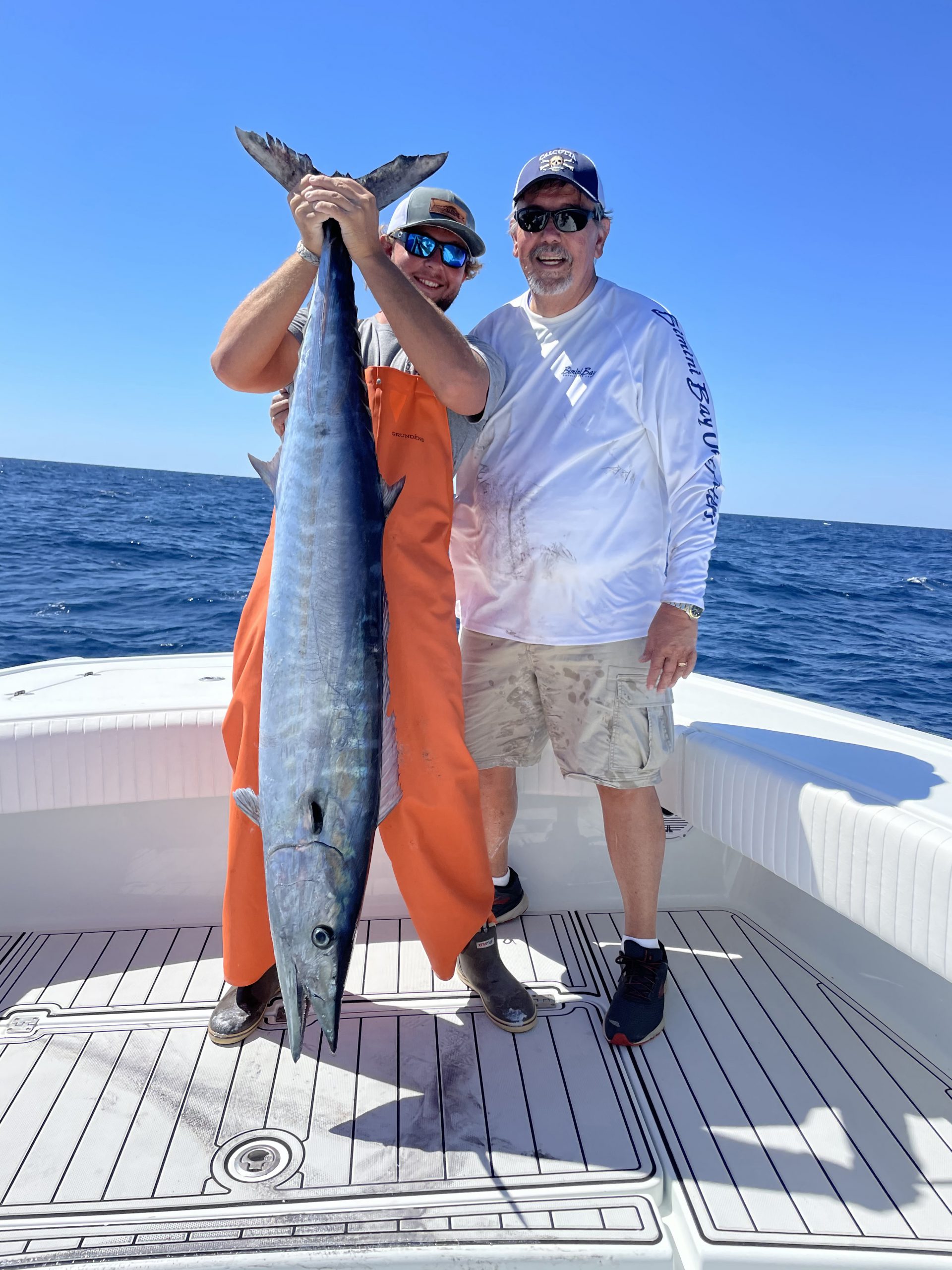 Lawrence Clay (right), from Nashville, TN, landed this 53 lb. wahoo in 120′ of water on a drift line while bottom fishing. He was fishing out of Ocean Isle with Capt. Tyler Hailey (left) of Salt Fever Guide Service.

Brant, of Ocean Isle Fishing Center, reports that anglers have been seeing good bottom fishing as grouper season wraps up to end the year. Grouper have been out in the 80+’ range.

Most of the kings are out in the 20+ mile range where water temperatures are still in the mid to upper 60s.

Anglers taking advantage of the small weather windows and running to the Stream are catching some large wahoo.

Going into the winter months, wahoo remain the main target for those making the long run to the break. Some blackfin tuna will also be mixed in.

King mackerel will continue to move with the warm water until sometime around January when they will finally push out.

Tim, of Tideline Charters, reports that speckled trout fishing has been as good as it gets for fall. Limits of trout have been common on most trips, with some large specimens (over 6+ lbs.). Pockets of trout are being found just about everywhere. Targeting an area of structure with current moving along provides a good chance there’s trout nearby. Live shrimp fished under corks is the easiest and most productive method, but artificials have had their place as well. MirrOlure MR-52s in green and orange color patterns or Z-Man soft plastics on 3/16 oz. Eye Strike jig heads are two lures seeing plenty of success.

The redfish have begun to move into the shallowest creeks where they are already showing a winter pattern of feeding and warming up on the lower tide cycles as the sun is high.

Both speckled trout and red drum will be staged up in the shallow mainland creeks through the coming winter months. Also look for drum to hold tight to docks and rock jetties along the ICW.

Tripp, of Capt’n Hook Outdoors, reports that inshore anglers have found the speckled trout bite to be absolutely on fire. Plenty of fish from 12-30” are feeding around the deeper water oyster and shell banks, both in mainland creeks and along the ICW. Live shrimp under float rigs have been the best producing setup.

Some black drum are mixed in the live shrimp action around the same oyster structures. Anglers can also specifically target black drum by fishing dead bait shrimp on a jig head around deeper docks and structure.

Red drum are the other species to strike live shrimp when around. For anglers targeting redfish, though, it is also a great idea to fish Carolina-rigged cut baits under area docks.

Action for anglers fishing with live shrimp should be hot until late December when the shrimp are no longer around. With this change, anglers will have success by switching over to artificial baits. The key is to fish the lightest baits that will still reach the bottom, as the deeper holes are where these schools will gather up in the cooler waters, and fishing on the warmer, sunny days will tend to produce more action.

Off the beach, king mackerel are still chewing. They are biting best closer to the shoals where water temperatures are hovering in the 68 degree range. They can be caught by slow-tolling cigar minnows.

Out in the Gulf Stream, the wahoo action is picking up. Anglers rigging ballyhoo with dark-colored skirts and trolling their spreads around 7 knots are getting strikes. High speed lures are working as well.

Gag grouper have pushed into the 55-80’ range, making them easy to reach when a weather window opens. Cut cigar minnows and assorted live baits are getting the grouper to bite.

A forecast into the next few months will see the king mackerel stick around a bit longer, if water temperatures allow them to not push offshore.

Trips to the Gulf Stream will produce both wahoo and blackfin tuna. Both species are going to be found in the warmest water reachable.

Bottom fishing will also remain strong for anglers working structure in the 100’ range. 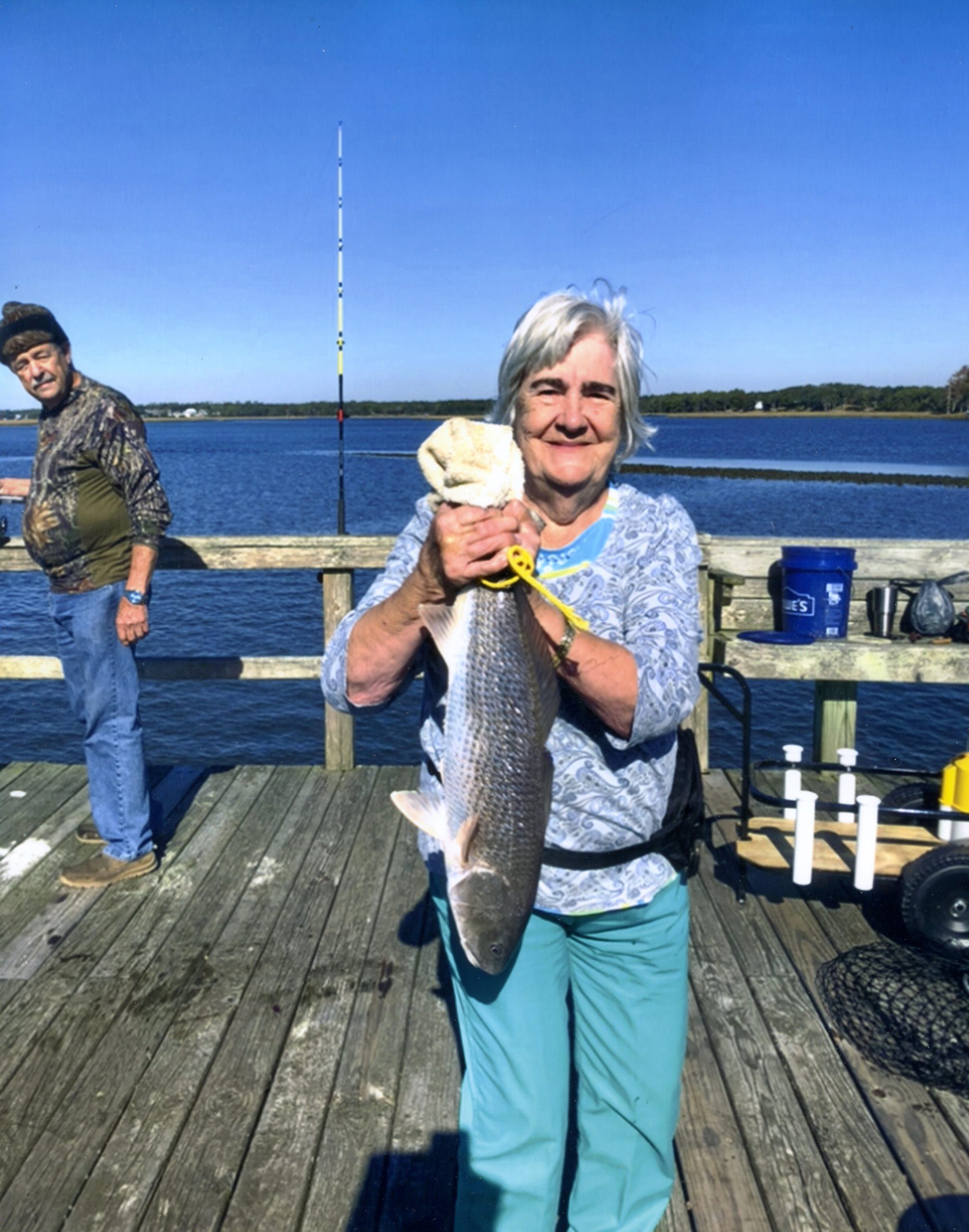 Philip, of Rod and Reel Shop, reports that surf anglers are seeing action from some large whiting, black drum, and scattered bluefish. These three species will generally holdover through the winter if weather patterns remain mild.

Inshore anglers are seeing nice-sized speckled trout being caught in deeper channels and up into the creeks. This is part of their seasonal transition where they stage up in the creeks for the winter. As waters cool, MirrOlure MR-17s and 27s will produce most of the trout bites.

Offshore action tends to be weather dependent this time of year. Mostly angers are targeting the bottom structures for grouper and keeper black sea bass.

King mackerel are still being caught, though they are holding further and further out.

A few speckled trout are also being caught in some of the deeper cuts outside of the breakers.

Anglers coming down to the beach over the next few months should focus on bottom fishing, with whiting and scattered dogfish sharks sticking around through the coldest months.