Jeff, of Ocean Isle Fishing Center, reports that red drum fishing has been very good. The best bet is to target the inshore structures and shell banks when looking for these smaller groups of reds. With live bait being so prevalent, using bait will be the top producing option. Be prepared with live shrimp or the smaller peanut pogies.

Some larger speckled trout will be mixed in these same areas and feeding on the same live baits.

Black drum prefer live shrimp and stay structure-oriented, as they only fluctuate spots with the tide swings.

Brant, of Ocean Isle Fishing Center, reports that fish have begun to transition into their summertime patterns. For anglers headed out to the Gulf Stream, this means more patience will be required as you search to find the right spot. The trolling action overall slows down a bit as fish become congregated around areas that provide an “oasis” in the mass of hot water. Looking for floating debris or current edges can make all the difference in loading up a box full of dolphin.

Bottom fishing becomes the offshore mainstay, with grouper, snapper, and other mixed bottom species feeding well in the 90-150’ depth range.

King mackerel fishing is very popular in the summer as the schools hold in the 50-100’ range in typically good numbers.

Spanish mackerel are plentiful along the beaches in 15-40’ of water. Look for good water quality when targeting the surface-feeding spanish.

Schools of menhaden are still along the beaches, and with them are some schools of tarpon. These bait pods tend to be a good source of action for a variety of other species, too, including cobia, jacks, and sharks. 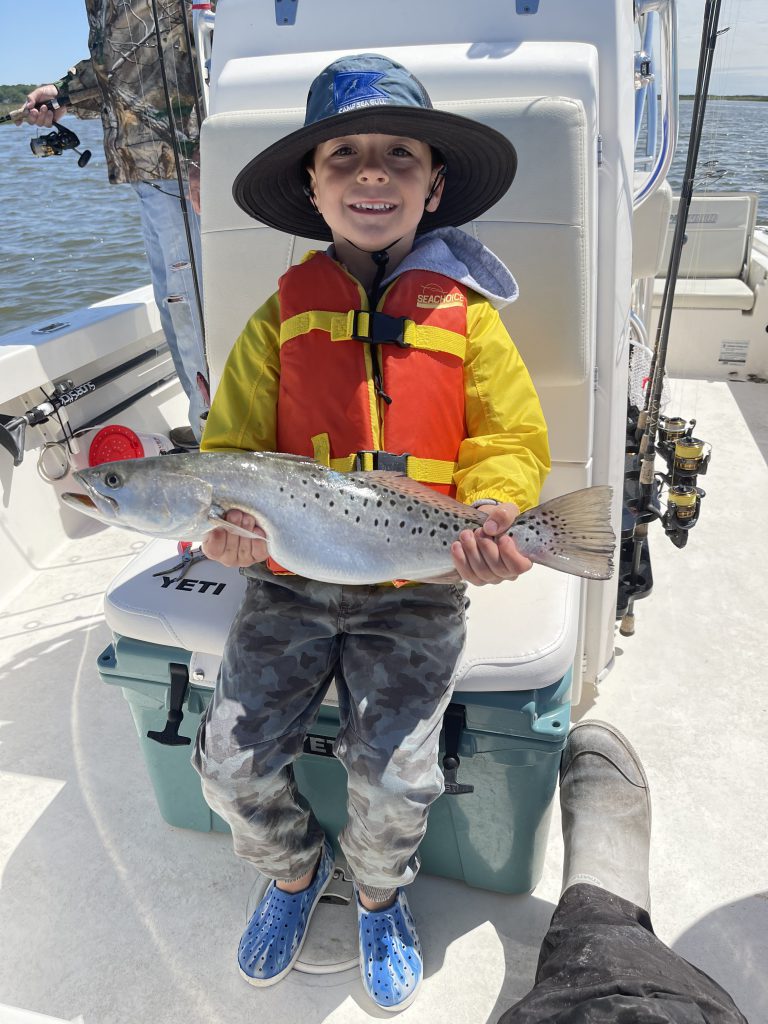 Ashley Garner with a speckled trout caught floating a mud minnow under a cork across an oyster bed on the falling tide. He was fishing with Capt. Tim Disano of Tideline Charters out of Sunset Beach.

Tim, of Tideline Charters, reports that redfish are holding deeper than they have the past few months. Anglers are having the most success while focusing on drop-offs and eddies in the deeper creeks on falling tide cycles. With all the bait inshore, it has been best to match-the-hatch or use Carolina-rigged live pogies.

Speckled trout have moved out of the creeks and are staged up in the inlets. Live shrimp are a great bait to cast net and rig on float rigs in these deeper areas.

Black drum and sheepshead are holding tight to the jetty rocks and bridge pilings during low tide periods. Live shrimp work best for targeting them and most inshore species in the summer.

Nearshore anglers are finding a strong king mackerel bite in the 45-55’ range while slow-trolling live pogies.

Tyler, of Rigged and Ready Charters, reports that spanish mackerel fishing has been very good when finding breaks of clear water.

The nearshore wrecks are loaded with sharks for anglers fishing live baits.

Bottom fishing in the 20 mile range is producing some keeper sized gag grouper (up to 27”).

While stopped on these bottoms, have a free-lined or balloon-rigged live bait out for king mackerel holding in this range.

Cobia fishing these deeper structures has been phenomenal. Most anglers were stumped to not find fish along the beaches this spring season, where as most schools seemed to hold on these structures in the 20 mile range and feed on bait over the wrecks. Both jigs and live baits have been getting action from the schools of cobia cruising through.

Peanut dolphin are hitting live baits in the 20-30 mile range, and the larger gaffers have been more in the 30+ mile range. 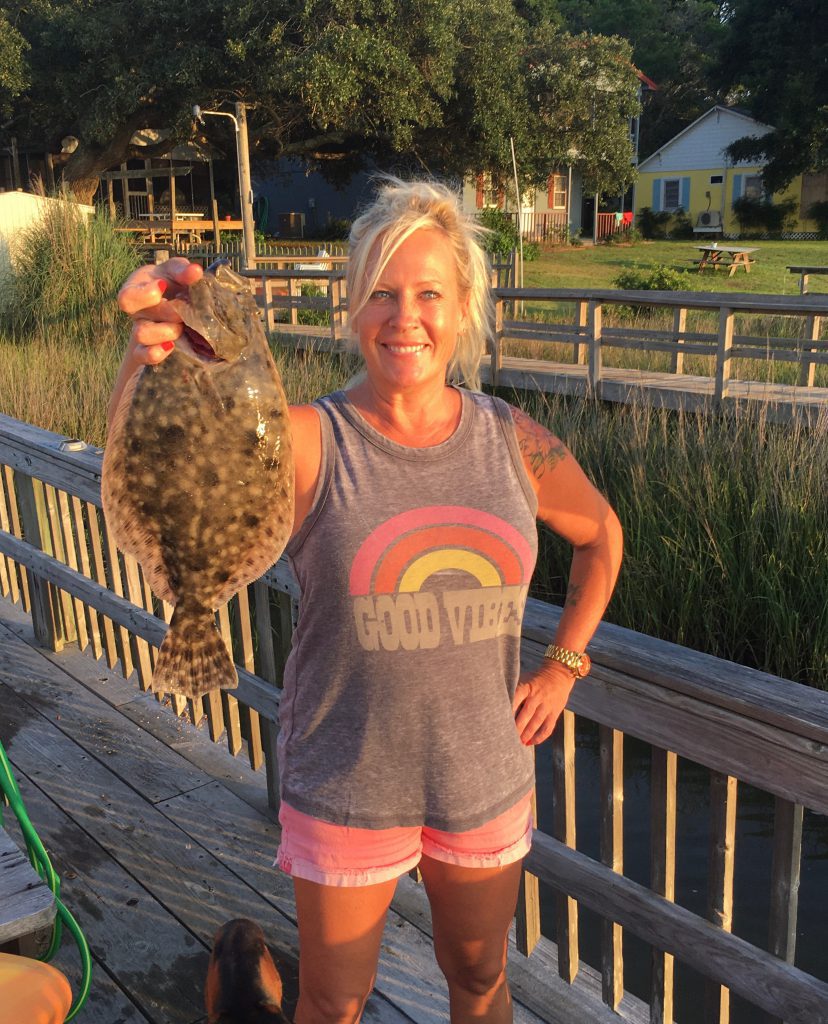 Leesa Snyder caught (and released) this 20″ flounder on a Carolina rig with a mullet minnow. She was fishing the Lockwood Folly area near Holden Beach.

Stewart, of Rod and Reel Shop, reports that redfish action has been strong in the ICW from Holden to Shallotte. Look for the reds to be staged up around docks and oyster banks, and they’re hitting a mix of live baits and artificials.

Some speckled trout are being caught by anglers fishing topwater plugs in the early mornings.

Sheepshead are pushed inshore and holding tight to rocks and pilings, and some flounder are being caught by anglers fishing Carolina-rigged live baits.

Nearshore anglers are catching spanish mackerel right off the beaches while trolling spoons and live baits. A few king mackerel are mixed in, and they will only get more prevalent as the water continues to warm.

Offshore bottom fishing action has been good, with a variety of grouper and snapper being brought up.

Jerry, of Ocean Isle Beach Fishing Pier, reports that bottom fishing has been the most productive and steady action from the planks. Black drum and whiting are the top two species, and they’re both hitting fresh bait shrimp.

Speckled trout continue to feed in the surf zone for anglers rigged with live shrimp.