Speckled trout fishing is spotty, with some trips catching their limits and the next day finding the fish have moved on. Anglers fishing the mid-water column should have the best possibility of stumbling into a trout bite.

Flounder are moving inshore and becoming a more common by-catch for anglers fishing baits along the bottom, especially around areas of structure. 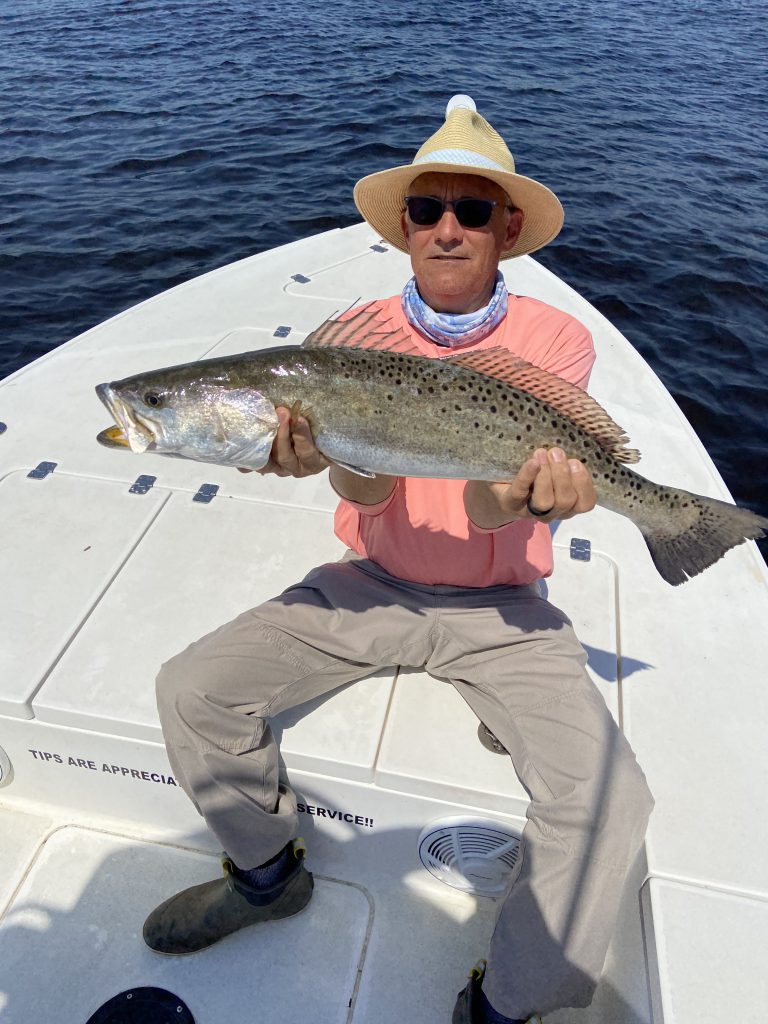 Dohn Caudell with a 29” trout caught using live bait under a float rig around the Little River jetties. He was fishing with Capt. Tripp Hooks of Capt’n Hook Outdoors.

Brant, of Ocean Isle Fishing Center, reports that the Gulf Stream mahi fishing will continue to be very good for the next few weeks as weather windows allow more anglers to get offshore. Some of these mahi will be scattering inshore around the 100’ depths, but a majority hold deeper. The primary area these schools are migrating through is the 100 fathom curve that is usually around the core of the Stream.

Scattered wahoo and blackfin tuna will be landed along the edges of the break as well. They’ll be hitting many of the same trolled offerings.

Grouper fishing has been fair over the past month and will continue to be stable throughout the summer months. However, the supposedly “extinct” American red snappers have been so abundant that it has made it tough to get baits down to the grouper.

Closer to the beach, king mackerel fishing is moving into a more typical seasonal pattern, with schools being found in the 50-70’ range.

Spanish mackerel fishing has been really good along the beachfronts in 15-25’ of water. The spanish have been particularly active around the large schools of menhaden.

Cobia will be moving more into the area with the bait now arriving in hoards.

Tim, of Tideline Charters, reports that inshore waters have been seeing a major influx in changes with the inconsistent weather patterns. Shifts between 8-10 degrees haven’t been all to uncommon, but the good news is that it has kept the speckled trout biting. The bigger winter schools have broken up, though, and it is now important to cover more ground to locate more fish. The rising tide cycles have been best as these groups stage up in deeper sections of the creeks, mostly around grassy structure.

Redfish are hanging out around oyster shell banks. With live bait now more plentiful, they are feeding on pogies and mud minnows.

Black drum action has been good around docks along the ICW, with cut crab being the top producing bait.

Just off the beach, spanish mackerel are biting in good numbers for anglers pulling Clarkspoons behind planers.

Tripp, of Capt’n Hook Outdoors, reports that inshore anglers are finding steady speckled trout fishing, with most of the action coming off live shrimp cast around oyster rocks.

Redfish numbers have been good for anglers bottom fishing around the inlets. Most of the fish are hitting live or cut pogies on Carolina rigs.

Black drum are feeding on cut shrimp fished around docks along the ICW on lower tide cycles.

Anglers heading off the beach are finding good numbers of king mackerel chewing in the 45-60’ range. Live pogies have been producing most of the fish, with dead cigar minnows also doing the trick.

Mahi and blackfin tuna are biting well for anglers making a run to the Gulf Stream. Skirted ballyhoo have been the go-to setup, with recent trips really doing well while pulling at the 7 mph speed. 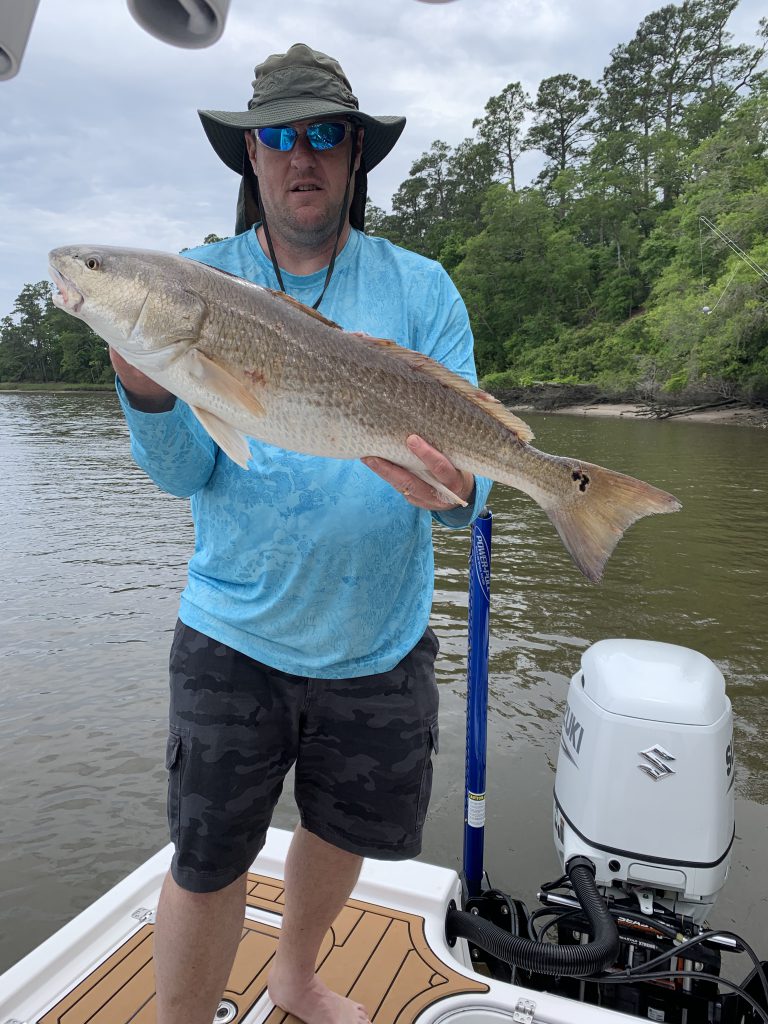 Christopher Reed with a red drum that fell for a mud minnow on the bottom along a structured shoreline in the Little River area. He was fishing with Capt. Chris Ossman of Fine Catch Fishing Charters.

Tyler, of Rigged and Ready Charters, reports that offshore bottom fishing has been really good on recent trips.

Large triggerfish have been holding along ledges in the 120’ range, and grouper action is still solid, with most fish pushed into deeper 190-200’ waters.

Trolling in the Gulf Stream has been producing a good mix of blackfin tuna and 10-15 lb. class mahi. Rigging medium-sized ballyhoo on Sea Witches and working weed lines has been the most productive method.

King mackerel fishing has been on fire in the 12-25 mile range. Anglers fishing around the Jungle and Shark Hole areas are catching double-digit numbers of fish while slow trolling live bait.

Anglers working over these offshore reefs (65-100’) are landing some cobia on the king rigs.

Closer to the beaches, anglers are landing spanish mackerel and sharks.

Stewart, of Rod and Reel Shop, reports that nearshore anglers have been catching good numbers of spanish mackerel while trolling spoons off the beach.

King mackerel are being found anywhere from the beachfronts out to structure in the 10 mile range.

Surf anglers are starting to see more drum in the catches. Both black and red drum are being hooked on bottom-fished baits.

Jerry, of Ocean Isle Beach Fishing Pier, reports that whiting and spot are being caught on the fresh, bottom-rigged baits.

A few speckled trout are still hanging around and hitting bait shrimp or soft plastics, and some keeper black drum are feeding on shrimp.