Jeff, of Ocean Isle Fishing Center, reports that flounder fishing has been great for inshore anglers. The flatfish are holding just about anywhere sand meets structure. Live baits and soft plastics are both getting action in these areas.

Good numbers of black drum and large whiting are being caught in deeper holes with bottom-rigged fresh shrimp.

Speckled trout remain mixed in along the deeper shoreline banks. Most of these smaller groups have been 13-15”, with some larger keepers mixed in. The fact that the trout stuck around all summer could be a great sign looking forward to fall. 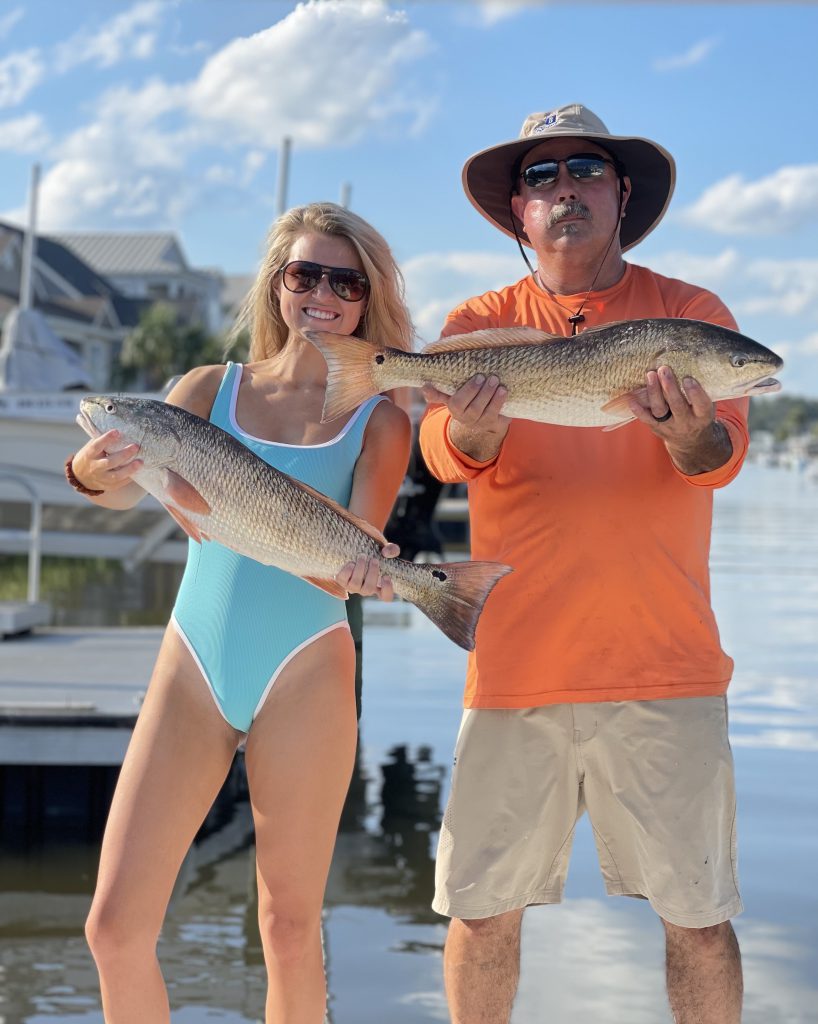 Shawn and Hunter Simpson, of Ocean Isle Beach, with a pair of redfish that fell for live mullet near Shallotte Inlet.

Brant, of Ocean Isle Fishing Center, reports that offshore trolling trips are catching a variety of large wahoo, tuna, and a couple sailfish. The tried-and-true Sea Witch skirted ballyhoo in blue/white and pink/white patterns have been producing many of the strikes.

Gulf Stream anglers will see blackfin and wahoo become more abundant as they stack up on the break.

Bottom fishing at the offshore structure is producing great action for triggerfish. Grouper fishing has been good but will keep improving as they move closer to the beaches (in 60-90’). Bottom fishing is the most productive trip to have in the summer months, as the bottom fish are less effected by the hot water temperatures and won’t spread out like the pelagic species.

King mackerel action has been solid in the 10-20 mile range. These fish have yet to move towards the beaches as water temperatures remain high (in the 80s). Slow trolling live bait has also produced a few cobia and large spanish mackerel.

Nearshore trips are finding limits of spanish mackerel and plenty of sharks along the beaches.

Tim, of Tideline Charters, reports that inshore fishing has been hit or miss. The summer heat makes it difficult to find scattered groups, but when you do, the bite is on.

Redfish have been feeding on cut and live pogies fished in holes with nearby oyster structure.

There has been good action on speckled trout all summer long. Anglers are having success casting live shrimp under floats around flooded grass banks and structure near the inlets.

Good-sized black drum are staged up around deeper docks along the ICW, with quartered blue crab chunks working well.

Carolina-rigged finger mullet fished on sandy banks with nearby grass are the areas to target inshore for flounder. When the weather allows, another good tactic is to target the nearshore reefs with live bait.

Tripp, of Capt’n Hook Outdoors, reports that inshore anglers are finding fish in their summertime patterns, and this can lead to some of the toughest and most frustrating fishing of the year.

Redfish are scattered, but most are holding around the deeper docks closer to the inlets. Carolina-rigged cut baits on the falling and low tide cycles have seemed to be best.

Speckled trout are on a different pattern and feed on the higher tide cycles that cool the water just a bit. Live shrimp fished around holes near oyster beds has produced the most regular action.

The flounder are spread out inshore, but the bite has been hot.

Nearshore trips are finding good king mackerel action in the 50-100’ range. Most of the strikes are happening while trolling live or dead baits over ledges and live bottoms.

Grouper have been moving a little closer in, with keeper gags as shallow as 50’ of water. The bottom bite only gets better moving into fall.

Wahoo have been chewing much better than normal for this time of year. Running out to the Gulf Stream and pulling ballyhoo with dark skirts has been producing best, but a few scattered wahoo have also been hitting live baits being pulled for nearshore kings.

JP, of Rigged and Ready Charters, reports that nearshore fishing has picked up a lot, now that bait is showing up along the beaches. There has been a mixed bag of spanish mackerel and scattered kings.

The 10-20 mile range has been the most productive area for consistent king mackerel action. A mix of barracuda, amberjack, cobia, and the occasional sailfish are all holding around structure in this same area. Slow-trolling live pogies both naked and under Blue Water Candy skirts are getting strikes, and having a bait on the downrigger has been key for finding any cobia in the area. Dead cigar minnows can be substituted for live bait with similar amounts of success.

As water temperatures come down and fall gets closer, the whole fishery picks up even more. 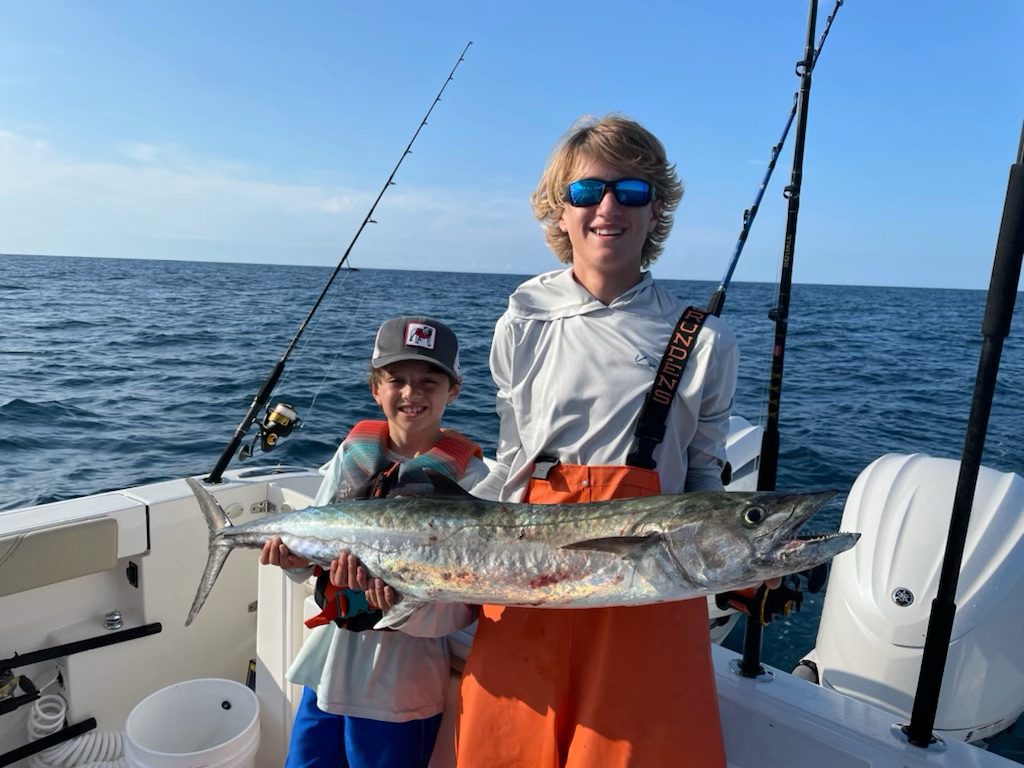 Wade Spencer (left) and Reid Tammaro with a king mackerel that fell for a live pogie while fishing off Holden Beach.

Teresa, of Rod and Reel Shop, reports that the spanish mackerel action remains steady (even when there’s dirty water from recent rains), and trolling remains the most productive method to getting strikes (when not locating the schools feeding along the surface).

King mackerel are pushed out in the 8+ mile range and holding over structure.

Anglers can look forward to finding keeper-sized flounder both on nearshore wrecks and around inshore docks.

Marta, of Ocean Isle Beach Fishing Pier, reports that good-sized speckled trout (to 21”) remain in the counts for anglers getting on the planks in the early morning and avoiding the hottest parts of the day.

Bottom fishing near the breakers has been producing pompano, and spanish mackerel are being caught with casting plugs when schools breeze past the pier.