Donald, of Custom Marine Fabrication, reports that a few speckled trout are starting to show back up in the lower Neuse River system with dryer weather allowing the salinity to rise. Look for these trout around the creeks near the sound, and still throw the typical wintertime suspending lures and soft plastics.

Striped bass action is picking up, with some anglers getting action on topwater plugs.

Shad fishing is slowing down in the upper Neuse. With salinity being basically non-existent upriver, it could be a bit longer before any saltwater species trek that way.

Things are already starting to shift into spring. Sea mullet arriving at the beaches is one of the first sign 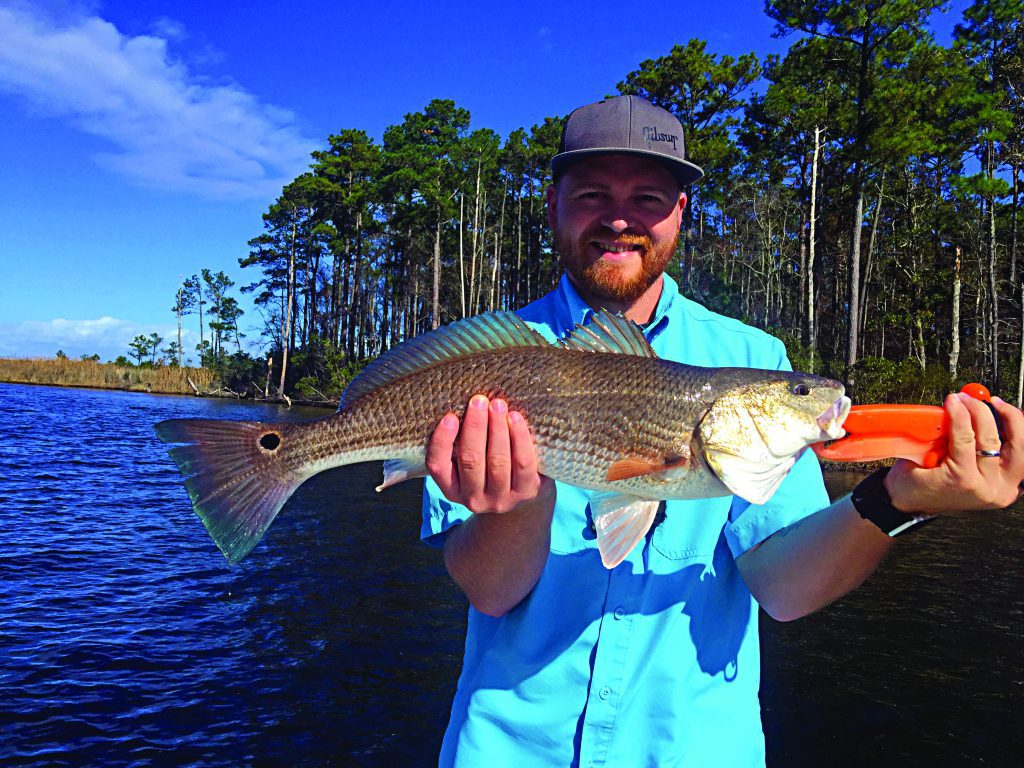 Matt Wagner, from Winterville, with a red drum caught on a Vudu shrimp in the ICW on the Pamlico. He was fishing with Capt. Jeff Koen of Salt and Swamp Guide Service.

s that fish will soon be returning to the sounds from the ocean. If the weather continues to be dry, anglers should see good fishing action in the lower river creeks and shoreline.

Gary, of Spec Fever Guide Service, reports that a great variety of speckled trout, puppy drum, and the rare flounder are feeding in creeks off the lower Neuse. If this weather pattern continues, look for these species to start pushing towards the river around the middle of April.

Striped bass are still scattered around, but a majority have made the trek well upriver past New Bern.

Around the end of the month, anglers anticipate more slot-sized red drum to be included in catches both in creeks and main river areas.

James, of Neuse River Adventures, reports that upcoming patterns through April start to see water temperatures rising and kicking off the topwater striped bass fishing on the river. These schools will be staged up around the abundant shoreline structure in New Bern, especially around areas with baitfish. As the month moves along, these stripers transition around the creek mouths and will provide some mixed bag action with resident freshwater species.

Some redfish will be caught around the creek mouths, too, as weather stabilizes and water salinities rise.

Jeff, of Salt and Swamp Guide Service, reports that shad fishing is still pushing on with plenty of fish being caught on tandem rigs. The go-to spoons produce action, but many anglers are having success with double twist tail grubs as well.

A majority of the striped bass are still upriver in their spawning pattern. A few are being caught by the shad anglers. Those looking for striper action are targeting the good numbers of resident striped bass that hold in the area year-round.

Speckled trout fishing is getting more successful as it gets closer to spring. Most of the schools are holding in the backs of creeks still waiting for water temperatures to rise before moving into the main bodies of water. Popping cork rigs with Vudu or Storm shrimp have been very productive in getting action in these creeks.

Anglers are finding scattered red drum in these same creeks.

Going into later April, anglers anticipate things only getting better as speckled trout get more active with warming water. These trout will be pushing out into the rivers and sounds during this transition. Red drum action gets more consistent as schools move into the area with incoming bait.

Justin, of Neuse River Bait and Tackle, reports that speckled trout fishing is really starting to pick up with the current warm weather patterns. Anglers are continuing to have the most success with MirrOlures and soft plastics in the creeks. As the water temperatures rise, sticking with soft plastics, live bait, and topwater plugs will produce strikes.

Shad are still around in good numbers, though the warmer weather has anglers targeting other saltwater species.

Striped bass are scattered all throughout the Neuse River region, from creeks and ledges to upriver structure. Most anglers are having success with larger (5”) swim baits fished in these areas.

April mainly sees water temperatures rise and fish catch numbers pick up. The main transition in the area is trout moving out from the backs of creeks and red drum starting to show up in the area.

Brent, of East Side Bait and Tackle, reports that recent weather patterns finally have the large influx of freshwater pushing out of the area. As a result, speckled trout action in the Pungo and area creeks has really begun to pick up. These groups of trout are holding in the shallower areas (up to 4’ depths) and are striking MirrOlures or Yo-Zuri plugs. Some anglers are having success with Gulp or Z-Man soft plastics.

Shad are still around in the region, but many anglers are switching their efforts to the striped bass that will be showing up in better numbers. White soft plastic paddle-tails fished around structure are great when you’ve located a school. To help search, many anglers troll Yo-Zuri moderate-depth divers or Smithwick plugs in the 8-10’ depth range.

As it gets later in the month, look for the speckled trout and redfish numbers to pick up as warmer water makes fishing more productive.

Flounder, though closed, will be showing up around the end of the month.

Mitchell, of FishIBX, reports that shad fishing in the region is beginning to dwindle now that fish are more scattered at the end of their spawning cycle.

Striped bass fishing is just getting going, and every season is a huge draw for anglers in the Roanoke River region. It has been very promising to see an overall larger class of fish (up to 10 lbs.) in this first wave. With the rules always changing, it is important to keep up with the regulations which vary on different waterways.

These groups of striped bass will be caught on both the upper and lower systems throughout April. Fishing with live or cut baits and casting jigs will both produce action. With the larger numbers of fish that run in the area, there isn’t much of a set location to target. Fishing both deep channels or ledges and flooded timber up on the banks can produce bites any given day.