Donald, of Custom Marine Fabrication, reports that some citation-class drum are starting to show up more often in the river. Most of the action is still by-catch while targeting other species, but more large reds will be moving in as they push into the inlets.

Slot-sized red drum are up on flats along the river shoreline. Fish live and cut baits to get some strikes.

Speckled trout fishing has been steady all summer long. A variety of topwater plugs, soft plastic shrimp, and live baits are getting the trout to feed.

Flounder are mixed in, with most action coming from anglers fishing Carolina-rigged live baits. 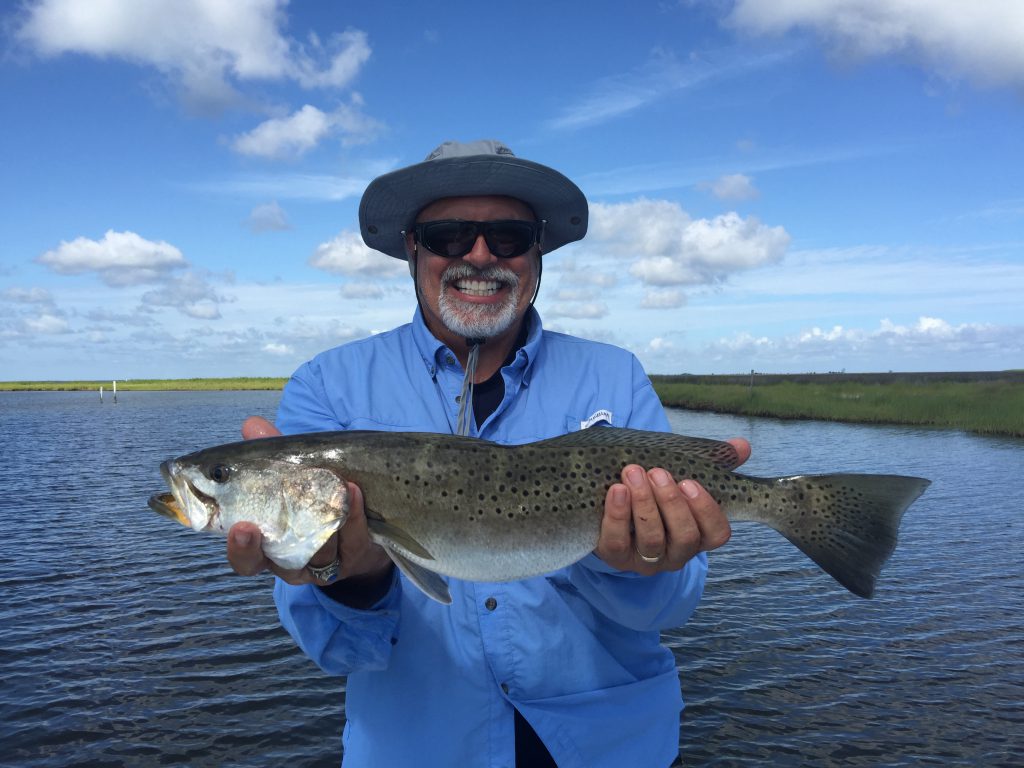 Mark Caspero, of New Bern, with a 23″ trout hooked using a soft plastic swimbait in the Neuse River. He was fishing with Capt. Jeff Koen of Salt & Swamp Guide Service.

Gary, of Spec Fever Guide Service, reports that red drum action has been really good along the shallow shorelines of the main river. A wide variety of topwater plugs, spoons, and soft plastics under popping corks are getting strikes.

Speckled trout fishing has been good all summer along these same river shorelines. Finding a willing group of fish holding in deeper (6-8’) holes or ledges are producing some double-digit catches.

August has the region’s anglers looking forward to the trophy red drum fishing. A few old drum are already around and are being caught on both topwater plugs and popping cork setups. Finding bait is always the key in this fishery, and anglers are marking bait holding deep throughout the river. Over the next few weeks, look for more citation-class reds to show up as they push inshore to spawn.

James, of Neuse River Adventures, reports that topwater action has been on fire for large striped bass and mid- to upper-slot red drum. Targeting the structured shorelines and areas holding bait has been key in finding the action.

There are quality-sized flounder being caught up and down the Neuse River. Bouncing baits along the bottom has been key in getting flatfish action, and this tactic should be useful through the keeper season in September.

The citation-class red drum haven’t made the full push into the area yet. With bait being plentiful, it shouldn’t be long until fish (and reports and photos) start popping up.

Jeff, of Salt and Swamp Guide Service, reports that redfish numbers have been good, with fish scattered just about everywhere in the river systems. They are in a summertime pattern where they travel along the shorelines in smaller groups following the bait schools.

Speckled trout are also holding up on the shoreline flats. Anglers are having plenty of success targeting these areas with topwater plugs early in the mornings, and then staying on the action with soft plastics and live baits as the sun and winds pick up.

Flounder are being caught by anglers fishing Carolina-rigged cut baits and Gulp swimbaits. The flatfish have been pushed up in as shallow as 1-2’ of water.

The rivers have very good salinity right now, and there are scattered schools of bluefish around.

With the good amount of bait pushed into the area, it has the large fish species moving in with them. There are scattered tarpon and trophy red drum in the areas around the sound. Over the next few weeks, the numbers of red drum will go up as the larger schools push more into the rivers from the ocean and sound.

Dylan, of Neuse River Bait and Tackle, reports that speckled trout action has been great for anglers targeting grass flats along the river shorelines. Topwater plugs and live baits have been producing many of the larger trout. Soft plastics are also a great go-to setup fished either on jig heads or under popping corks.

Plenty of slot-sized red drum are being caught along these same shorelines, with areas closer to the sound being more productive. There are a few strikes at topwater plugs in the early morning, but most action is from live or cut baits and soft plastics.

Coming into August, anglers will start to see more citation-class red drum as they filter into the river systems. There are scattered numbers being caught now, but most are bycatch while targeting the smaller redfish and trout. Look for bait balls and target them with larger popping cork setups, topwater plugs, or cut baits.

Flounder are being picked up by anglers fishing baits on the bottom. Though anglers eagerly anticipate keeper season opening up in September, most flatfish being caught currently are small.

Mike O’Neil, from Delaware, with a striper that hit a Super Spook Jr outside of New Bern. He was fishing with Capt. James Holloway of Neuse River Adventures.

Richie, of East Side Bait and Tackle, reports that speckled trout fishing has been good for anglers getting on the water in the mornings. Topwater plugs are great for scouting grass banks on the lower Pamlico as the sun breaks, and then switching over to soft plastics or shrimp once the heat of the day settles in has been the best tactic.

A few citation-class drum are popping up around the lower Pungo as more bait moves into the area. Over the next month, more schools of these redfish push in from the ocean as they prepare for their spawning run.

Flounder are being found all throughout the area. Just about any baits, live or artificial, fished on the bottom are getting strikes.

Mitchell, of FishIBX, reports that summertime striped bass action has been great on the Pamlico and Neuse rivers, though hot weather has the bite only lasting a few hours. Any lures or fly setups worked on the surface have been producing.

Upriver anglers are landing some stripers that held over, but with low salinity don’t be surprised when a large catfish (up to 40 lbs.) takes the bait.

The lower sections of the river are producing speckled trout. Many times you have to weed through shorts to find the larger trout mixed in. Artificial soft plastics, especially shrimp patterns, will produce strikes. Anglers rigged up with live shrimp will outproduce every other setup and catch attention from any swimming trout nearby.

Slot red drum are scattered just about everywhere there is structure along the shoreline. These reds are not picky, so grab any favorite lure and hit it with some Pro-Cure scent to raise hookup numbers.

The trophy red drum are on their way. Anglers should be patient in targeting them, as larger numbers really seem to arrive overnight somewhere around the end of August.