Donald, of Custom Marine Fabrication, reports that speckled trout remain the main target for anglers looking to get out on the water. The lack of rain has the water salinity high, and this has allowed for plenty of trout action upriver.

A few red drum are still hanging around the same shorelines and creeks where trout are holding. Though a majority of the reds have pushed out for the season, some of the reds will holdover in the area.

Striped bass are heartier in the cool water temperatures and are continuing to actively feed. Target the stripers in area creeks and near structured areas of the river shoreline.

Through February, look for trout to finish their transitions into the backs of area creeks. These fish will slide around depending on weather. On cloudy days, gets baits down into the deeper holes, whereas sunny and clear conditions bring the trout up onto the shallow mud flats. 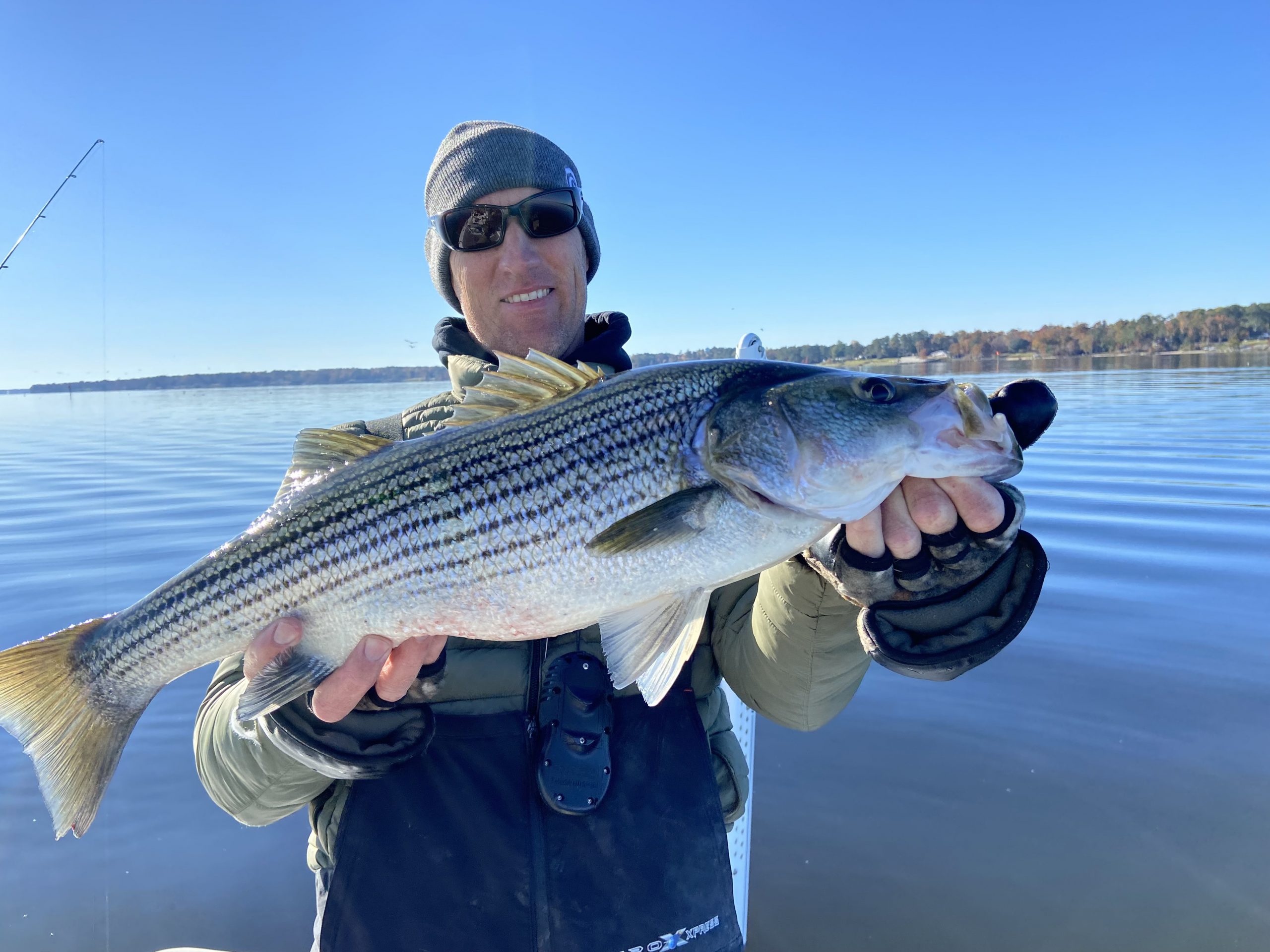 Capt. Mitchell Blake, of FishIBX, caught this striped bass with an Alabama rig while fishing the Neuse River.

Gary, of Spec Fever Guide Service, reports that speckled trout are in transition as they move into their winter holdover areas. Anglers are finding them both along main river shorelines and up in the creeks. Seems there has been more shoreline action the closer to New Bern you get, while the lower river action has moved into creeks.

Soft plastics continue to get plenty of strikes, especially when anglers are sure to use the correctly weighted jig head or cork to stay in the strike zone. MirrOlures also are a favorite, as they work these same strike zone areas.

Some redfish are still in the mix, with target areas and bait options being the same as trout.

Striped bass are being caught on hard ledges and structured areas around New Bern.

Moving into winter, it is a smart idea for anglers to start their fishing efforts more in the afternoons. On clear, sunny days in particular, this allows for upticks in water temperature that help the feeding action (and anglers’ comfort level). Most holdover fish will be tight to the bottom. Use baits that can get down into this strike zone, and the last tip is to fish slow.

James, of Neuse River Adventures, reports that anglers have been on a roller coaster this fall, with early cold fronts doing their best to try and affect the area’s fall fishing. These weather patterns stabilizing towards either the warmer or cooler side will help the fish in settling in their patterns and allowing anglers to more consistently find action.

All three of the local species—speckled trout, red drum, and striped bass—are present, with anglers having success in targeting them with artificial baits from now through February.

Jeff, of Salt and Swamp Guide Service, reports that speckled trout action has been going strong as we move into the colder months. Anglers are having success with both twitch baits and soft plastics rigged under popping corks.

The trout have begun their transition up into area creeks to winter. Some schools will be found in deeper holes to keep warm, while others will move way into the backs of creeks to sun over dark mud flats. Finding bait is key in locating areas to fish, as the slower action required makes it difficult to blindly “run and gun” up these creeks.

Some red drum are mixed in the same areas every now and again, and this pattern will be about the same throughout winter.

Striped bass are residents to the area and tend to draw to areas of structure. In the colder months, you can target these fish by casting both soft plastics and stick baits in area creeks. Umbrella rigs with 3 or 5 plastics also tend to have success. Some groups of stripers will also hold out in deeper holes (20’+) in the upper Neuse and Tar rivers. Target these areas by trolling deep diver plugs or jigging soft plastics on heavy jig heads.

Stephen, of Neuse River Bait and Tackle, reports that the water has really cleared up, and the lack of rain has high salinity throughout the river. This has the trout scattered from the lower river up into the New Bern area.

Cooler water temperatures have the trout moving into larger schools, with some nice-sized fish mixed in the groups. Anglers have found the natural-colored bait patterns to be best.

When the water dirties up again, it will help to move back into the more boisterous color patterns. Anglers are also having great success with hard baits. MR-17s and 27s are both great lures, with the larger MR 27 series being a better option for deeper holes and 17s more on the shallower flats. Little to no action is needed when fishing these lures in the winter, so be sure to keep “contact” with your bait as it slowly drops into the target zone.

Striped bass are being caught around structured areas near New Bern. Many of these are resident fish that will holdover all winter. Large soft plastics and hard plugs both have success when casting or trolling these structured areas.

Some smaller red drum are mixed around the same creek mouths and points with the trout. The reds being caught now will follow the same patterns of moving up creeks to winter. Most of the other reds have pushed down to the sounds to migrate out into the ocean for the winter. 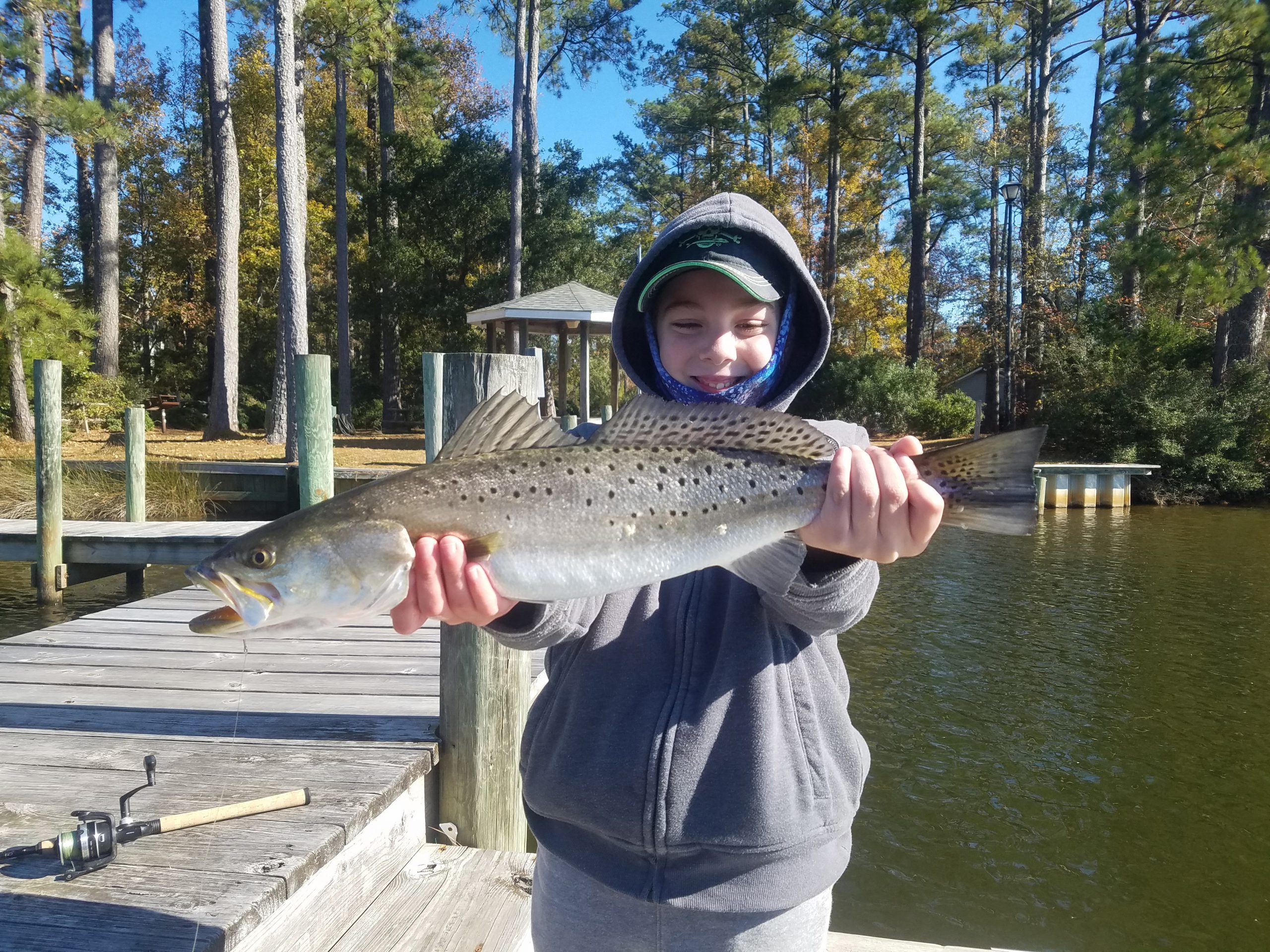 Henry Tanner (age 9), of Beaufort, caught this 28″ speckled trout on a Hopkins lure while fishing in Adam’s Creek.

Brent, of East Side Bait and Tackle, reports that speckled trout fishing on the Pungo River has been on fire. Even with the water temperatures cooling, these trout are actively feeding. Knockin Tail soft plastics have been the popular choice of local anglers, as are the go-to MirrOlure MR-18s and Paul Brown lures. Darker purple/pink and Mardi Gras color patterns have been working best.

Some rockfish action is being seen in deeper holes and around shoreline structure in the Pamlico River.

Mitchell, of FishIBX, reports that anglers are finding a nice-sized class of stripers, better than most seasons in the past.

The use of swimbaits has been preferred due to their great versatility in being able to target different situations. Yeeha, Hawg Jawz, and Aaron’s Baits soft plastics have all had some great action and color patterns to tempt strikes. Anglers will also have success with Rat-L-Traps and hard plastic stick baits.

Speckled trout fishing has been good, with fish still being found just about everywhere in the rivers as they transition into their winter holes.

Going into winter, both species will continue to actively feed. Speckled trout will be up in the creeks where slow retrieves will entice a bite and expect to find stripers around structure in the Pamlico and Neuse river systems, with the Roanoke River action firing off in January.