Donald, of Custom Marine Fabrication, reports that red drum action has picked up a lot in the river, with the arrival of baitfish getting the fish more active. Anglers are finding success with both Carolina-rigged cut baits and artificial soft plastics and topwater plugs.

Black drum are holding around structure and small ledges. Cut baits and especially fresh shrimp are key for the black drum action.

Striped bass have moved out in the main river and are being seen all the way up to structure around New Bern. Topwater plugs and artificial baits fished around structures that hold bait are great tactics for getting strikes.

Out in the sounds, some tarpon have been seen rolling. It is only a matter of time before anglers have success with live and cut baits fished on shoal ledges.

The larger citation class red drum could start showing up any time now. As the summer moves in, the numbers start slowly creeping up as the big reds move inshore with the bait schools to spawn.

Gary, of Spec Fever Guide Service, reports that red drum action has been spectacular in recent days. Targeting the points and main river shorelines has been producing strikes on topwater plugs and soft plastics under popping corks.

Good numbers of speckled trout (up to 23”) are mixed in the artificial bait action.

Some trophy red drum are showing up in the region. As the summer settles in, the influx of bait brings these schools of fish inshore as they prepare for their spawn. In the meantime, don’t be surprised with a drag busting run while targeting the slot reds and trout.

Flounder have been mixed in with the daily catches. 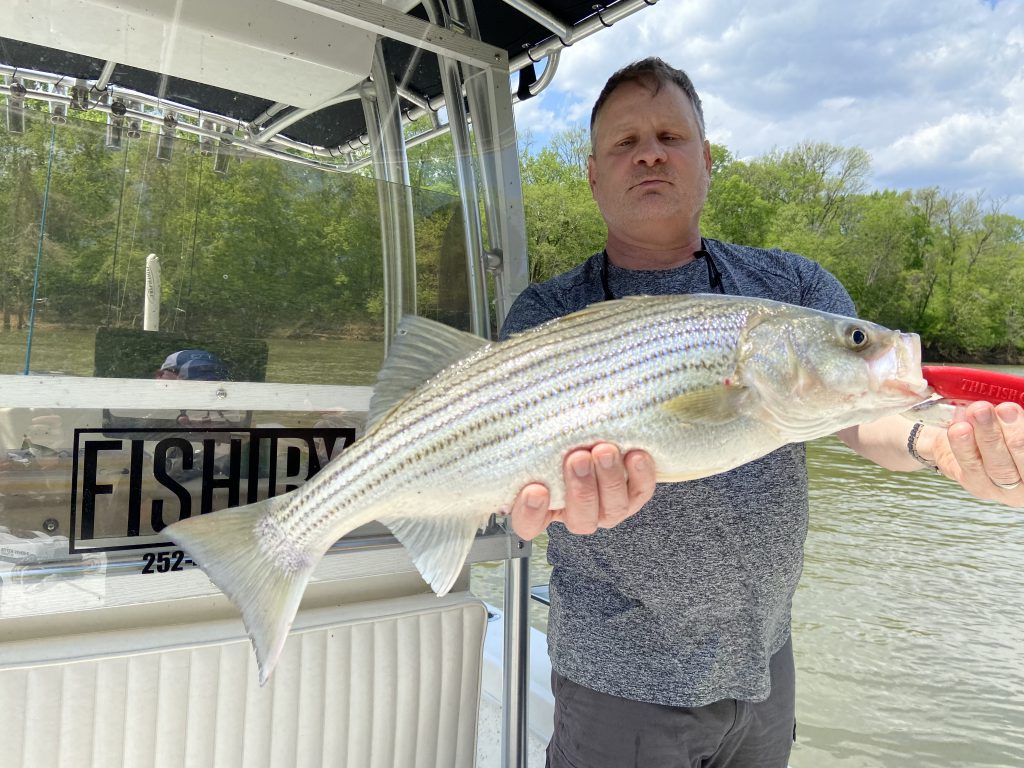 Allen Duel with a striper caught on the Roanoke River using a Carolina-rigged shad. He was fishing with Capt. Mitchell Blake of FishIBX.

James, of Neuse River Adventures, reports that most fishing action remains on the southern end of the Neuse River. Anglers targeting shorelines from Oriental out to the sound are catching plenty of slot-sized red drum. Popping corks rigged up with swim bait soft plastics on jig heads are the top producing setup for working these areas.

Topwater action has been good this year and continues to produce strikes when the conditions are right to work the plugs correctly.

Some nice-sized speckled trout are mixed in the same region and feeding alongside the redfish, and anglers working swim baits near the bottom are catching some flounder.

Getting into summer, anglers shouldn’t be too surprised to hear about some trophy class red drum trickling in.

Jeff, of Salt and Swamp Guide Service, reports that slot-sized red drum fishing has been on fire. Almost all of the action has been coming off artificial plastic setups. Soft plastic paddle tails rigged on lightweight (1/8 oz.) jig heads have been great for working the river shoreline. Vudu shrimp have also been the hot ticket this year and best worked under a popping cork. If having trouble with conditions or overall artificial bait success, Carolina-rigs with cut baits also get attention from the red drum.

Speckled trout are in the mix, and anglers have seen some days with high catch numbers.

Flounder are pushed into the river now that the summer bait has fully arrived.

A few large red drum are being found in the Neuse, mostly as bycatch for now. This bite only gets better going further into summer.

With higher water temperatures (74-76 degrees), the chance to find schools of rolling tarpon from the river mouth out into the sound goes up.

Todd, of Neuse River Bait and Tackle, reports that there have been tons of red drum in the Neuse. Most fish are coming in as upper-slot to over-slot (up to 32”), and sheer numbers have anglers saying it’s the best action in years. Four Horseman and similar popping corks rigged with D.O.A. or Gulp shrimp have been a great setup for anglers looking to fish artificial baits. A mix of topwater plugs and live baits are also seeing plenty of action. Targeting the main river shorelines and points has been the most successful method.

Some good-sized speckled trout (up to 30”) are mixed in the count for anglers fishing closer to the mouth of the river.

There are a lot of sheepshead holding tight to structure in the area, with live fiddler crabs being the top bait choice. Black drum are in these same structured areas feeding on fresh shrimp.

Flounder are around and especially prevalent for anglers fishing live baits or soft plastics on the bottom.

With the large amounts of mullet and menhaden in the river, it is very important to target areas that are holding the bait. Work the main river shorelines more often than creeks. If conditions make finding bait difficult, it can be a great tactic to start targeting windward grass banks and shoals—areas that could have bait pushed up against shorelines and ledges. 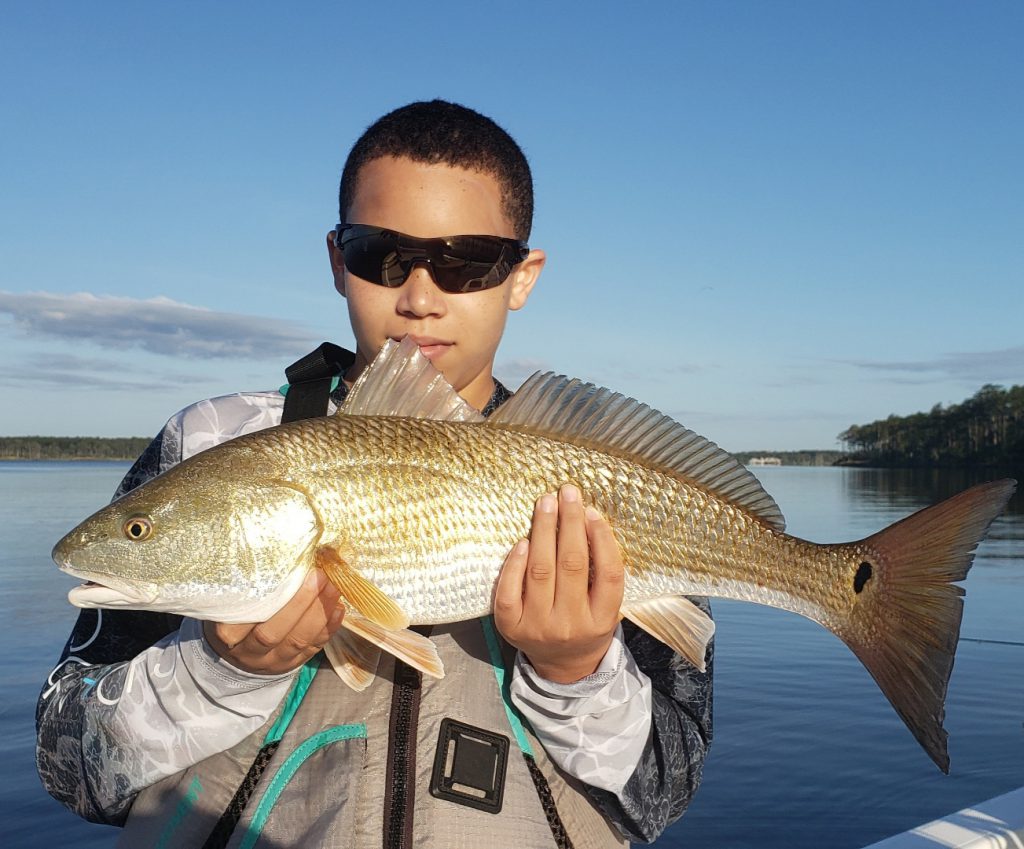 Donovan Keller, from Oriental, NC, with a red drum that was fooled by a Storm Mangrove Minnow under a popping cork. He was fishing with Capt. Gary Dubiel of Spec Fever Guide Service.

Brant, of East Side Bait and Tackle, reports that speckled trout fishing has been good for anglers targeting grassy shorelines around Swan Quarter with action out to the lower Pungo area.

Some puppy and slot-sized red drum are mixed in the action.

The upper Pamlico has been a bit slow for saltwater species with all the freshwater flushed through.

A few citation-class red drum are being caught around Bay River.

Mitchell, of FishIBX, reports that striped bass action has been phenomenal. Anglers have been absolutely crushing large numbers of fish on topwater plugs, with many days seeing well into the upper double digits (60+). The Roanoke region and some of the connecting lake systems saw a great season as anglers continue to take advantage of the action.

Anglers fishing out to the east are finding that the speckled trout and slot-sized red drum action is good.

Moving forward into July, expect to see some stray trophy-sized red drum and tarpon mixed in.