Donald, of Custom Marine Fabrication, reports that striped bass and red drum are starting to fill out in the river, being caught as far up as New Bern. Target both these species around area creek mouths.

Speckled trout action has mostly held from the mouth of the river out into the Pamlico Sound. Look for the trout in deeper holes off the creeks.

Spanish mackerel are pushing in from the sound. Anglers have been successful in sight-casting to feeding fish as far up as Oriental. 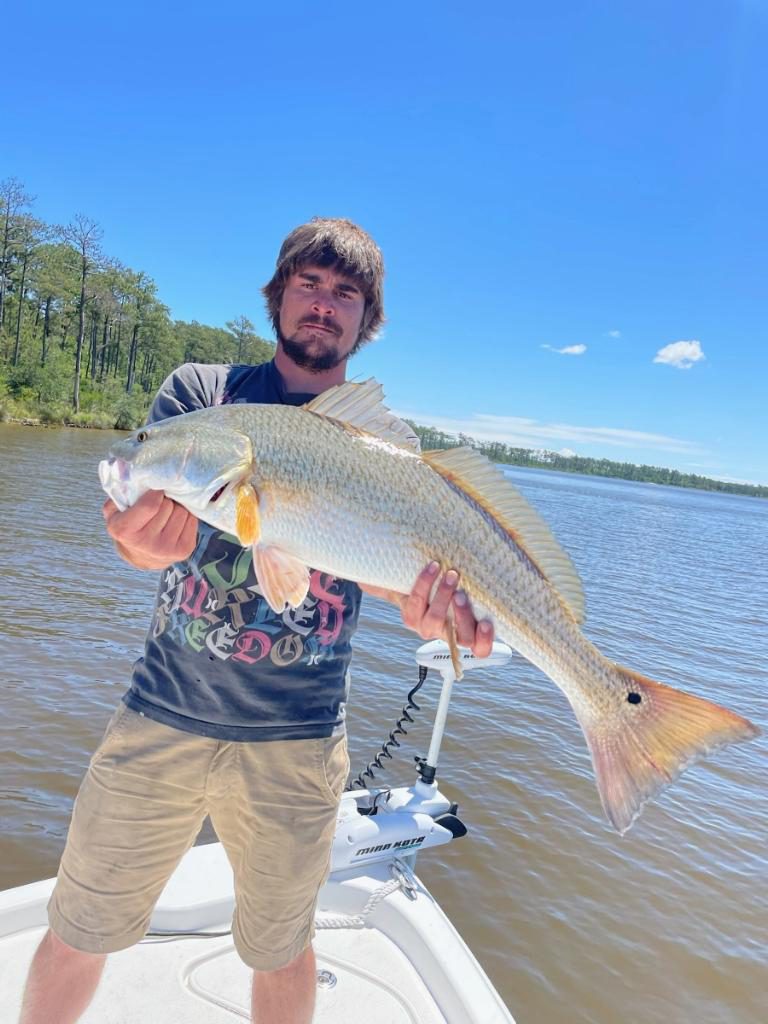 Dustin Paderick with a 29.5″ red drum that was caught on a pink MirrOlure while fishing Slocum Creek off the Neuse River.

Some puppy drum are mixed in the same trout holes. As more bait moves into the river, the red drum only get more active.

After some of these long northeast wind stretches, there have been some citation-class drum caught.

A few stripers are being caught on topwater plugs along the structured shorelines of the Neuse River.

James, of Neuse River Adventures, reports that much of the red drum action has been focused on the lower Neuse. Upper-slots and a good number of over-slot red drum are being caught with soft plastics and topwater plugs.

Some large speckled trout are holding along deeper sections of these shorelines for anglers working the same topwater and artificial bait offerings.

Flounder have started to make their way into the river. For now, they have been a by-catch while targeting reds with baits fished on the bottom. With the arrival of more bait into the region comes more flatfish, and by the time keeper-season opens later this year, the bite should be in full swing.

Jeff, of Salt and Swamp Guide Service, reports that speckled trout are transitioning out of the creeks to the main river shorelines. Anglers are finding the trout to be big and ready to spawn. Soft plastics fished on both jig heads and under popping cork rigs are producing most of the action. Other tactics are getting strikes, but the bite has been so strong on swimbaits that there hasn’t been a need to switch it up.

Red drum are moving into the same areas along shorelines and shallow water points off the river. Finding areas holding bait has been extremely helpful when looking for the redfish.

Some nice-sized flounder are moving into the area and hitting soft plastic baits on jig heads.

Anglers in the area are finding old drum scattered around. This fishery only picks up over the next few months as they follow bait into the river. For now, the big reds aren’t a species you specifically target, though.

Striped bass are moving back down river as they finish their spawning cycle.

Todd, of Neuse River Bait and Tackle, reports that anglers are finding a great class of speckled trout while working a variety of baits around creek mouths and windswept grass banks. On days with light winds, there is plenty of success from the topwater crowd, and soft plastics and shrimp imitation lures are always the go-to setups when the weather doesn’t cooperate.

A healthy class of slot-sized red drum are mixed in along the shorelines.

Smaller flounder are starting to move in and add to the mix of species working the river shorelines.

Sheepshead are holding up around docks, channel markers, and rocks. Live fiddler crabs are the top producing bait for dropping tight to these structures. 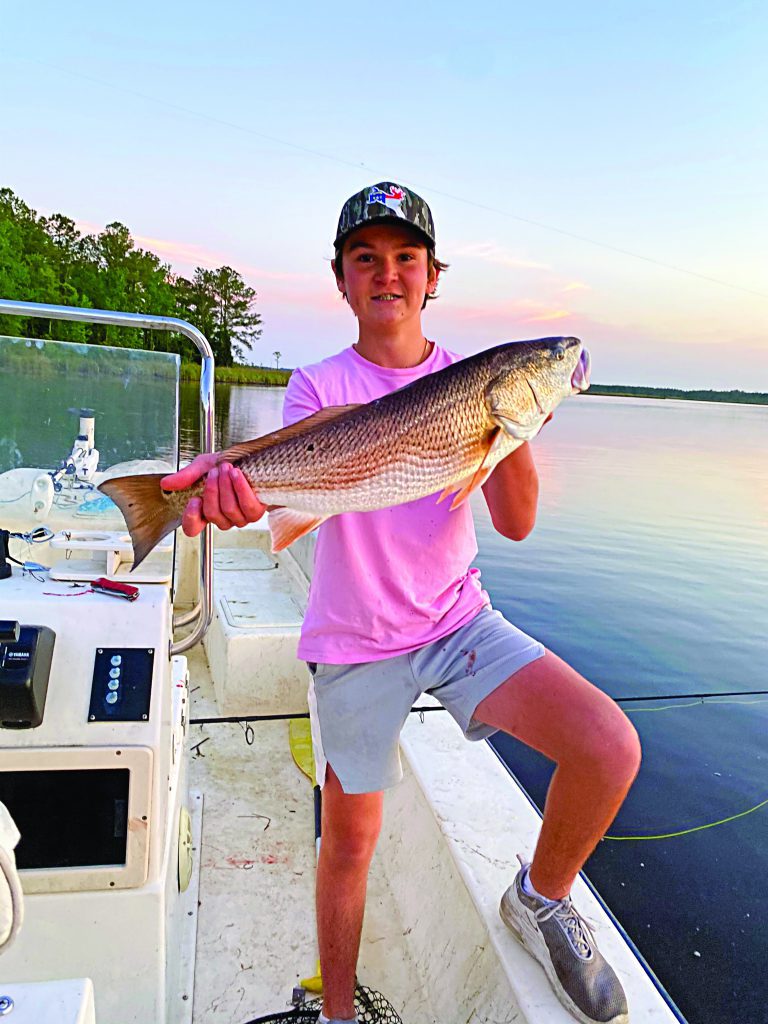 Hamilton Vaughn, from Pamlico, with a 25″ redfish caught using cut mullet on a bottom rig in the Pamlico River.

Kent, of East Side Bait and Tackle, reports that speckled trout continue to hold in the higher salinity waters closer to the sound. Areas around Swan Quarter and Rose Bay have been a good jumping off point for anglers targeting the deeper grass banks.

Red drum are mixed in these same areas down to the mouth of the Pungo River. Targeting marshy areas mostly towards the sound have been key for a successful trip.

Black drum are being caught by anglers fishing bait shrimp around structured shorelines and docks.

Some flounder are being caught by anglers fishing bottom-rigged live baits and bouncing soft plastics off the bottom. This migration is just beginning, and by-catch while targeting other species will be more common in coming weeks.

Mitchell, of FishIBX, reports that striped bass fishing has been on fire all season. The Roanoke River system has had a great year, with this strong action remaining through this post-spawn bite. Anglers can target these fish as they push down river on their way back into the sounds. Warming weather patterns only make the schools more active in coming weeks. Both topwater plugs and soft plastics are producing strikes.

While targeting post-spawn stripers, it’s not uncommon to land bream, crappie, or catfish in this mostly freshwater system.