Donald, of Custom Marine Fabrication, reports that shad fishing is firing up in the Neuse despite the recent rains. This fishery is the main focus in March, with catches of over 100 fish some days. Rigging up with shad darts, spoons, and small grubs is a sure-fire way to get in on the action.

Speckled trout did not respond well to all the rain, and many have moved out of the rivers in search of saltwater. It may be a bit before action picks up again with the way the weather has been this winter. Usually, the return of bait around the mouth of the Neuse is a good sign for all saltwater species going into the year.

Gary, of Spec Fever Guide Service, reports that striped bass fishing has been really good, with quality fish staged up along ledges in a pre-spawn pattern.

Shad fishing is picking up in the river, though anglers really need for the rains to stop to allow water levels to fall. Currently, most of these early shad are hidden up in the flooded trees. There should be plenty of action, with this bite lasting until the middle of March.

Speckled trout are somewhere out in the Pamlico Sound. All the fresh water flooding the area has pushed these trout out of their typical late winter holes in search of higher salinity. 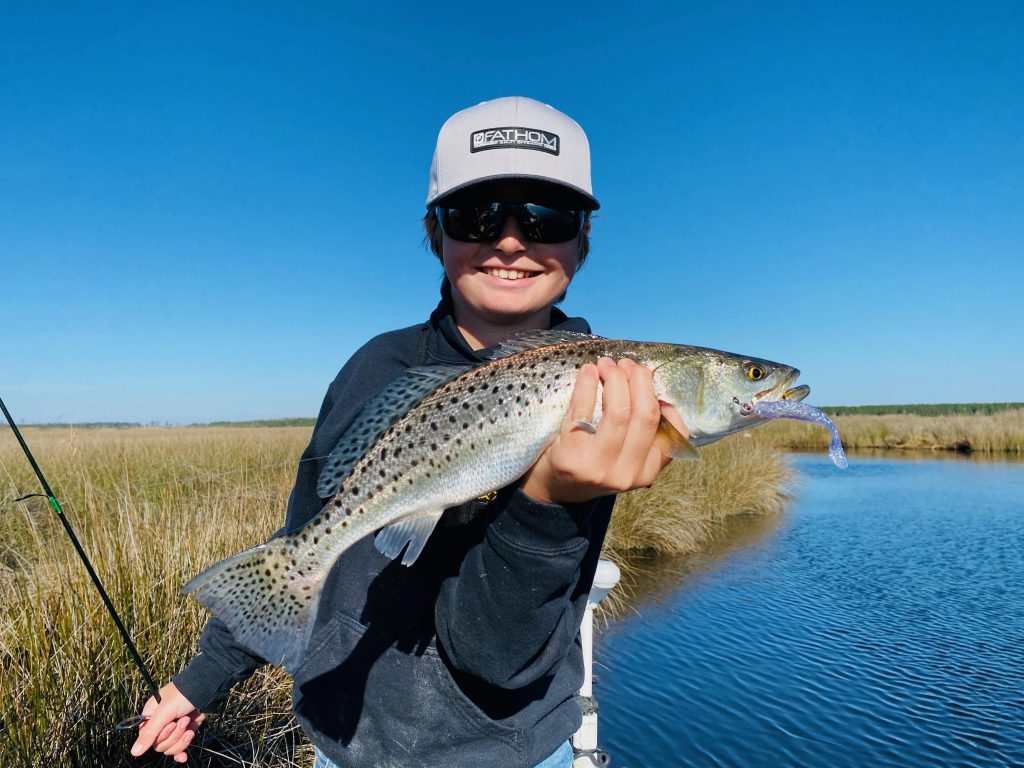 Brown Gaddy with a 20″ speckled trout that was caught using a soft plastic with a Fathom jig head and a popping cork. He was fishing the Pamlico Sound.

James, of Neuse River Adventures, reports that anglers look forward to the shad season kicking off in the Neuse River. It has been an extremely wet winter, and the river is muddy, swollen, and running hard. A stable weather pattern is critical to begin bringing conditions back to normal.

Anglers should anticipate seeing more reports towards the middle to end of the month when these shad will be schooled up more along ledges and not so scattered.

Jeff, of Salt and Swamp Guide Service, reports that the Neuse and Pamlico rivers have been flooded with recent rains. This can make fishing difficult in the short term, but conditions change quickly with all the moving water.

Striped bass are being found in deep holes throughout the main river complex. Targeting areas of moving water is also key, with these sluggish fish looking for the meal to “come to them.”

Shad fishing should be picking up anytime over the next couple weeks, which could be as soon as these recent conditions clear out and water levels stabilize. Anglers will be most successful with small, curly-tailed grubs on 1/8 oz. jig heads and lightweight spoons. The shad bite can be very color dependent based on water clarity, so it is beneficial to be willing to switch things up before changing spots.

Speckled trout are holding in the feeder creeks, with some schools not as far back as anglers may typically think. Most important has been the weather conditions paired with finding shallow, muddy areas that will heat up faster than surrounding waters. On overcast days or during longer cold spells, target the trout in deeper holes, as they sit along thermoclines with slight temperature differences.

Steve, of Neuse River Bait and Tackle, reports that going into the next few weeks anglers will be looking for speckled trout to be moving out of the creeks. MirrOlures are the best for getting strikes from these early season trout, as water temperatures have the fish sluggish and holding in mid-water columns. Once more live mud minnows become available, they also become a great choice to entice a strike. Soft plastics are always a go-to, though they tend to fish better with warmer water.

Striped bass are hanging around creek mouths near New Bern. They are a great target when conditions are less than ideal, as they are tough and very tolerant of cold water and fluctuating salinity.

Shad are being caught, but many are up in the tree-filled, flooded shoreline. As the weather stabilizes, these schools will move back to traveling along ledges for anglers casting smaller shad rigs. 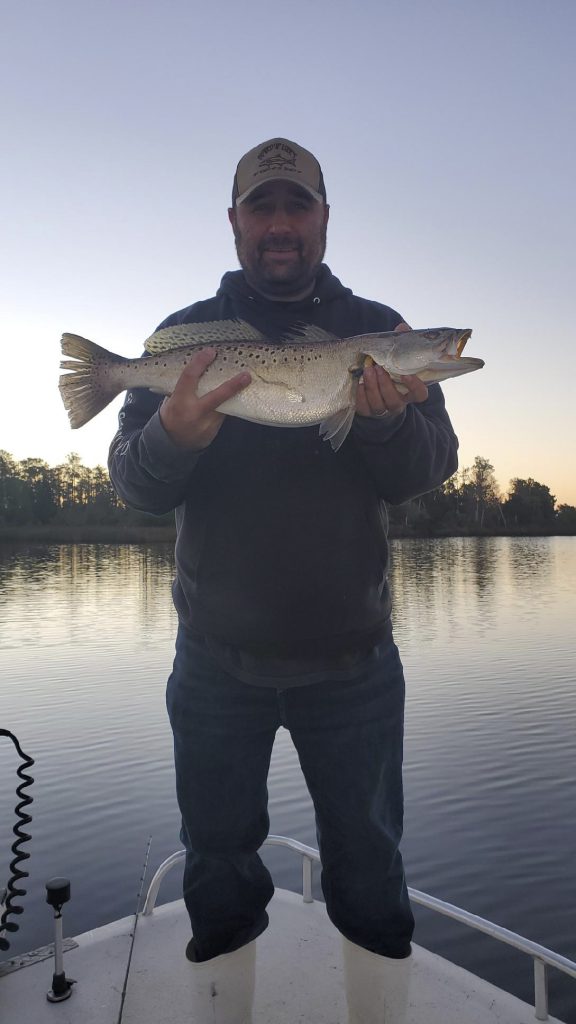 Eric Bregman with a 26″ speckled trout that was caught (and released) on a topwater in the Neuse River.

Richie, of East Side Bait and Tackle, reports that anglers are finding a few striped bass when working Rat-L-Traps and similar crank baits around ledges and structure. As the water warms up a bit, anglers anticipate the topwater bite not being too far behind.

Shad are showing up despite the high water flow from upriver. Fishing the Neuse has been the best bet for finding schools not pushed up into the shorelines.

Speckled trout and red drum action will pick back up once these rains start to let up. Anglers looking for early season action should target areas closer to the sound that have more salt in the water. MirrOlures and soft plastics are the go-to lures for finding action on these early, sluggish fish.

Mitchell, of FishIBX, reports that striped bass fishing has been solid despite the muddy waters from recent rains. The Pamlico and Tar rivers are holding the stripers along deeper, 14’ ledges in the main river. Soft plastic flukes on heavier jig heads and bucktails have been best for enticing bites from these holes.

About as soon as recent water conditions clear, anglers should begin to see shad in the reports. Target them with light-weight tackle setups and smaller beetle jigs, shad darts, grubs, or spoons. This action should last through March, and then hopefully a warming trend will see striper and trout action pick up even more.