Donald, of Custom Marine Fabrication, reports that local fisheries are in a big transition after the first cold fronts of the season have moved through.

The rest of the trophy-sized red drum have all but packed up and pushed out onto their migration to the south.

Spanish mackerel are being caught from the sounds out onto the beachfronts, but these first cold fronts have them not far from pushing out and joining the migration.

Slot-sized red drum fishing has stayed strong, and plenty of these fish will hold over in the area into the winter.

Speckled trout action is picking up, with fish now moving off the main river shorelines as they start to push back into creeks. This dry, early fall weather and cooperative winds have allowed the river to hold good salinity, and there are already trout being caught way up into the Trent River. If this pattern holds, the area could be up for a spectacular trout season. 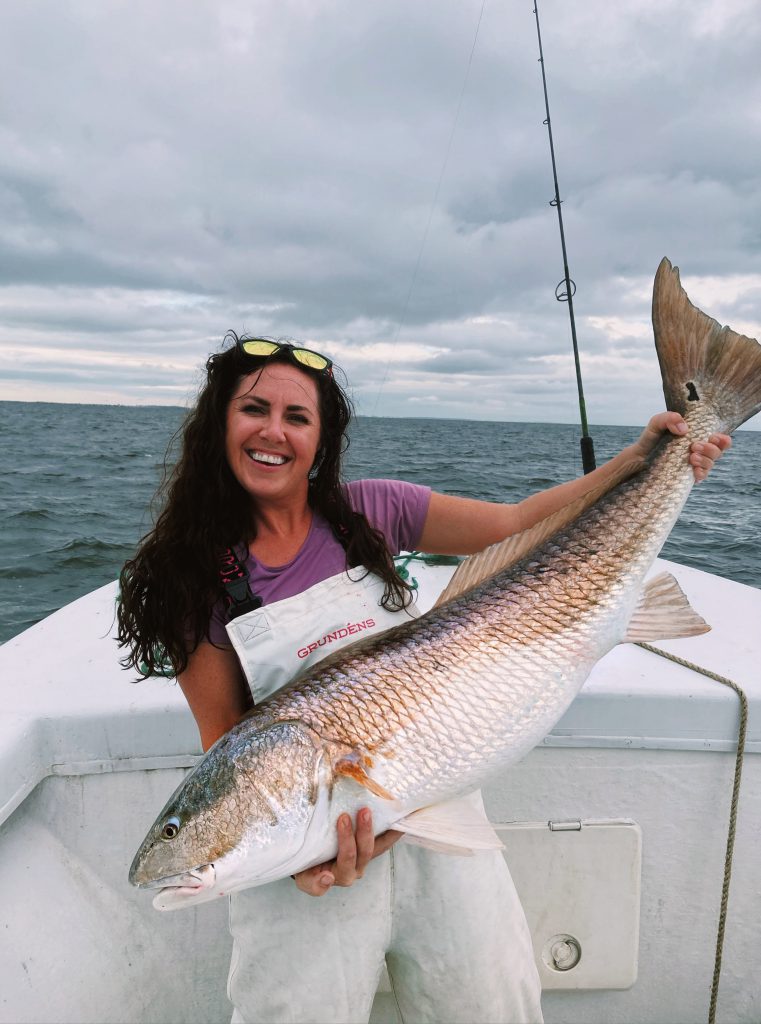 Perry Houghton, from Brevard, NC, with a 47″ red drum caught using cut bait in the Neuse River. She was fishing with Capt. Zach Bruno of Endurance Seafood out of Oriental.

Gary, of Spec Fever Guide Service, reports that anglers have been taking advantage of the trophy red drum fishery as it very slowly begins to wrap up. Cooler temperatures make it difficult to target these fish strictly, but as long as the bait stays around, so will some of the big reds.

Slot-sized red drum action has been steady all fall, and with these fish sticking around, the action looks to continue.

Going into late fall, anglers look forward to speckled trout action picking up. The water temperatures have stayed warm, but the cold fronts get these fish moving into the creeks where they school up and become easier to target.

James, of Neuse River Adventures, reports that anglers in the New Bern area have had some great fishing throughout October. There have been tons of bait in the area, and none of it seems to be leaving anytime soon.

Most trips are finding a quality mixed bag of striped bass, slot-sized red drum, flounder, and the occasional trophy redfish that are still around.

Speckled trout fishing has also picked up a lot, and as anglers know, the action only gets better from here as water temperatures continue to cool.

Jeff, of Salt and Swamp Guide Service, reports that some of the old drum are still in the mix as a result of water temperatures remaining warm in the area. This has also kept all the local species from really moving into their typical fall patterns.

Some speckled trout are showing up in the creeks, though the big numbers haven’t shown up yet.

Slot-sized red drum are mixed in the same areas as the tout, and many times anglers will catch them side by side. Popping cork setups with Vudu shrimp, Z-Man SwimmerZ, or DieZel Minnows in various color patterns are getting strikes. Anglers are also having success with swimbaits on jig heads and sub-surface hard lures.

There are some striped bass around upriver. With the stripers (and typically all of the river’s species), it is key to find bait before focusing your efforts on fishing. 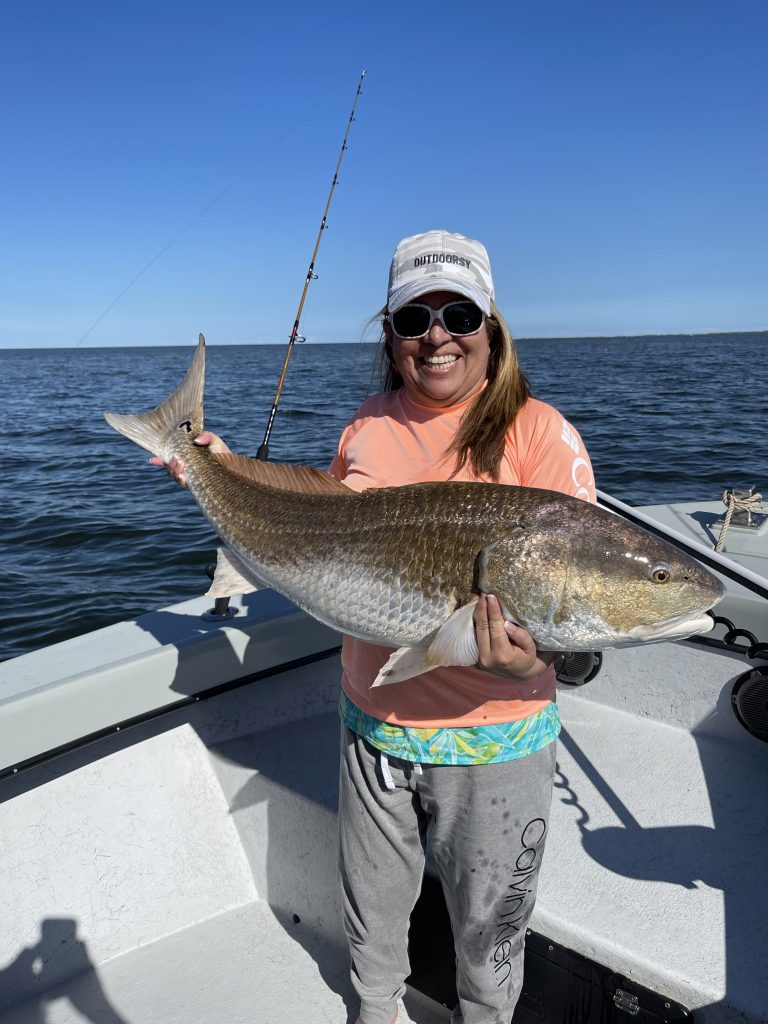 Pilar Chavarria with a citation drum caught on cut menhaden in the Pamlico Sound. She was fishing with Capt. Jennings Rose of North State Guide Service.

Brent, of East Side Bait and Tackle, reports that the Pamlico region is seeing speckled trout fishing pick up as we get into the later weeks of fall. There has been plenty of live bait around for these trout to feed on as they transition from the river shorelines into creek mouths.

Anglers in the lower Pamlico are still catching a few citation-class red drum. As the large schools of bait push out in the coming weeks, so will the rest of the big reds.

Water temperatures are still high, and as a result, there are schools of spanish mackerel around from the lower river into the sound.

Going into November, the high water salinity paired with falling water temperatures should really kick off some great fall fishing.

Mitchell, of FishIBX, reports that there is more bait hanging around the river this late in the season than anytime in recent memory. As long as there’s bait around, expect great fall fishing.

There are still plenty of trophy red drum in the river systems and out to the sound. Don’t let reports be the only thing that guide you. Once your eyes are on the water, fish areas that look “fishy.” Cast bigger soft plastics under a cork around bait balls to see if you can find a citation red.

Speckled trout are showing up and are being found just about everywhere that has good salinity. A good tip for trout right now with all the different bait inshore is to “match the hatch.” For example, don’t be throwing shrimp-patterned baits when the trout are feeding on menhaden.

There have been a number of bigger stripers landed recently, including many pushing 30”. This change between seasons has the schools of stripers a bit off compared to the past few weeks, but in short time they will show back up and bite well into winter. In the meantime, the stripers seem to be holding out in more open water and feeding on the schools of menhaden.