Donald, of Custom Marine Fabrication, reports that puppy drum and striped bass action has been picking up along river shorelines and creek mouths in the lower Neuse system.

Citation class red drum fishing has been good, with many anglers having success with casting popping corks at bait balls. Though this is great for keeping anglers’ attention, soaking fresh bait on Owen Lupton rigs is also very productive.

With plenty of bait holding deep this season, anglers have been trying out newer tactics and finding success. The Rat-L-Trap craze proved itself this year, with anglers also using large MirrOlure MR-37s to garner strikes.

Speckled trout have been moving upriver to the New Bern area. Most numbers have been in the 14-18” range, with larger (to 20”) fish mixed in. If the area can avoid major rainfalls, anglers could see strong trout action in the upper river (New Bern/Trent) areas. 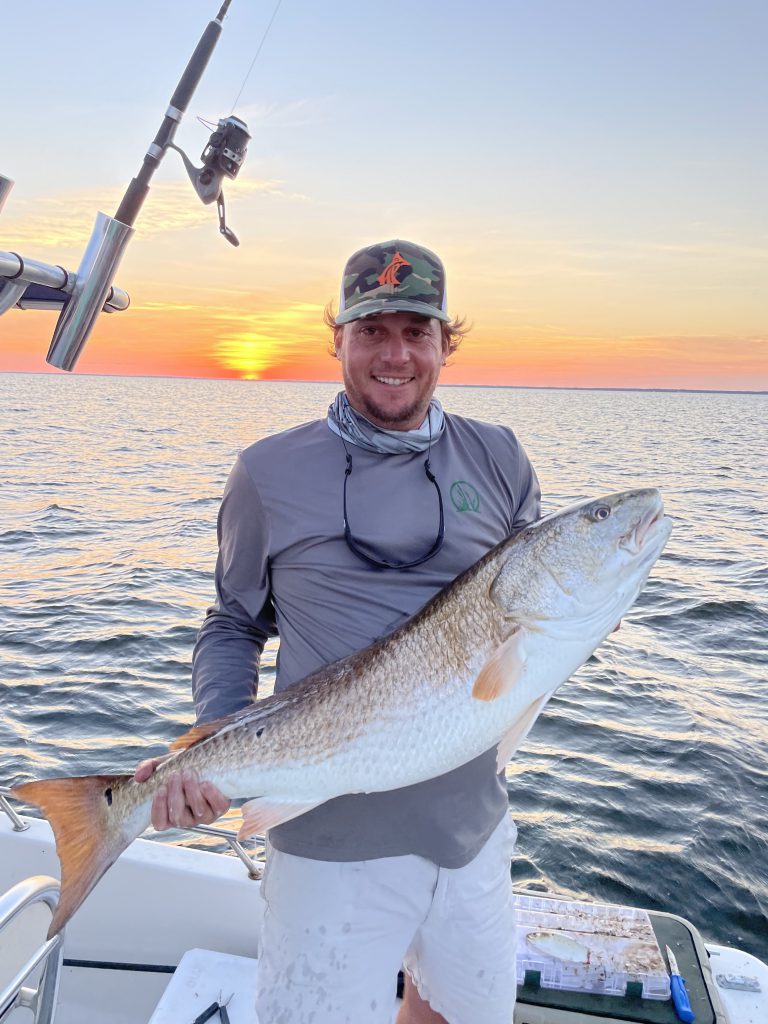 Charlie Heritage, of Greensboro, with a 40″ red drum that fell for a fresh cut menhaden. He was fishing in 16′ of water in the Neuse River.

Gary, of Spec Fever Guide Service, reports that trophy red drum action is going strong in the area for anglers casting around all the bait balls working in the lower section of the river. These citation-class reds are going to continue to feed well in the area until the bait starts to push into the sounds, which generally is late October.

Slot red drum fishing has also been picking up for anglers positioning up against the shorelines to get out of the winds.

A few striped bass are being caught around structure at the creek mouths, and it really only gets better in the coming months.

The speckled trout action is another large addition to the October action. Early showings of these fish point to a great fall season ahead, if the weather patterns continue. Look for action to really pick up and hit another gear around the end of the month.

James, of Neuse River Adventures, reports that action in the New Bern area is looking strong, with seasonal weather changes getting bait moving all around. The month of October should be great, with good numbers of speckled trout already filtering into this upper Neuse region. Stable weather patterns are key going forward.

Most trips are seeing a nice mixed bags of trout, red drum, striped bass, and flounder.

Jeff, of Salt and Swamp Guide Service, reports that old drum action is still very good as it gets into the later part of their spawning season. Overall, it was a slow start to the year, with plenty of the first fish being caught by anglers throwing popping corks for slot red drum or speckled trout. Popping cork action has remained strong when being able to locate the bait balls, which have been either really deep or shallow (less than 5’) and not so much in between. Cut bait fishing has been good all year and is productive when conditions make the “run and gun” methods tough.

Slot red drum fishing has been very steady, and anglers are pleased to see great action while working the banks with soft plastics, popping corks, and fly fishing setups. As the waters start to cool more, this bite remains strong as schools push towards creeks that congregate the bait schools.

Speckled trout fishing will be picking up as bait moves downriver and along the shoreline edges. Topwater plugs make great search baits for targeting the grass lines around creek mouths for these groups of trout. 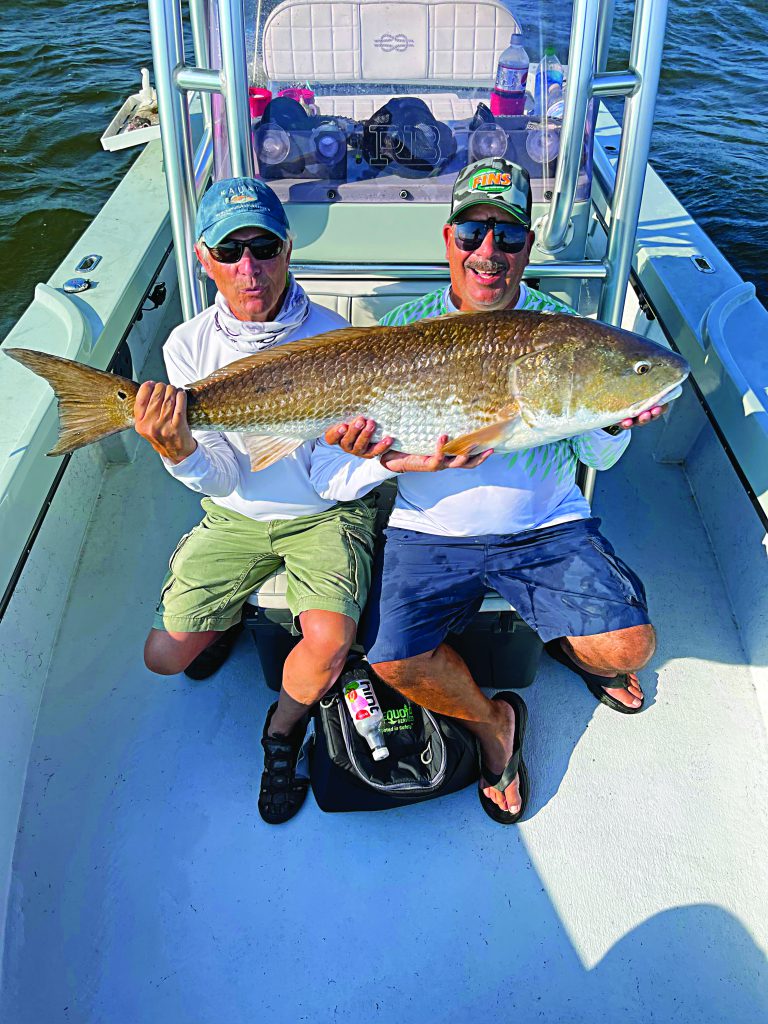 Gerry Amitrano (right) and George Cullen with a 45″ red drum caught in 3′ of water in the Neuse River on a mullet head. They were fishing with Capt. Jennings Rose of North State Guide Service.

Justin, of Neuse River Bait and Tackle, reports that red drum fishing has been good for all sizes of drum. The trophy red drum are going steady in the Oriental area. Anglers are casting large soft plastics under popping corks at bait pods running up the shorelines. When fishing in the evening, anglers are using fresh mullet and fishing ledges with Lupton rigs.

Slot-sized red drum are becoming more plentiful. All the bait pushing around has anglers finding success along shorelines and up into creek mouths.

There are some flounder around to be released by anglers fishing live baits on the bottom.

Speckled trout action is just starting to pick up as the weather patterns turn towards fall. The water temperatures starting to cool is one of the keys that anglers look for when beginning to target trout. Over the next few weeks, the early trout action will best be produced by live baits, soft plastics under corks, and MirrOlures.

A few scattered striped bass are being caught around structure in creek mouths up to New Bern. This is another species that thrives on cooler water temperatures and sees action improve going into fall.

Kent, of East Side Bait and Tackle, reports that speckled trout have started to transition back into the Pungo and connecting areas now that water temperatures have started to cool. The bait has really just started shifting, and the trout action is waiting on a good cold front to really flip the action on.

Slot-sized red drum are staged up along the main river shorelines, and they’re feeding on bait as it starts to push out into the sound.

The trophy red drum fishing is still going on, though the bite is starting to move out towards the sounds as these fish wrap up their spawning period.

Mitchell, of FishIBX, reports that anglers looking to find a trophy redfish are still having successes across the river systems. The end of September provided some sporty conditions, but more than anything this got the bait moving about while keeping the large reds actively feeding. This action will be slowly dropping off over October, but anglers should know they don’t disappear overnight and will continue to be hooked.

Speckled trout are starting to feed better now that temperature patterns are shifting towards cooler, fall weather. This is a spectacular fishery in the region, and a little more of a drop in water temperatures will see these schools ramp up the action.

Anglers working the riverbanks and creek mouths are catching some slot-sized red drum and the occasional striped bass.