Angie, of Dutchman Creek Bait and Tackle, reports that inshore anglers are catching good numbers of black and red drum in area creeks.

Nearshore action has been focused around the spanish mackerel that are schooled up off the beaches, and offshore trips are finding plenty of king mackerel pushed in over deeper structure.

Mahi are just starting to show up, and numbers should get even better as weather stabilizes and more schools migrate in.

Surf and pier anglers are hooking spanish mackerel, bluefish, and some early kings. 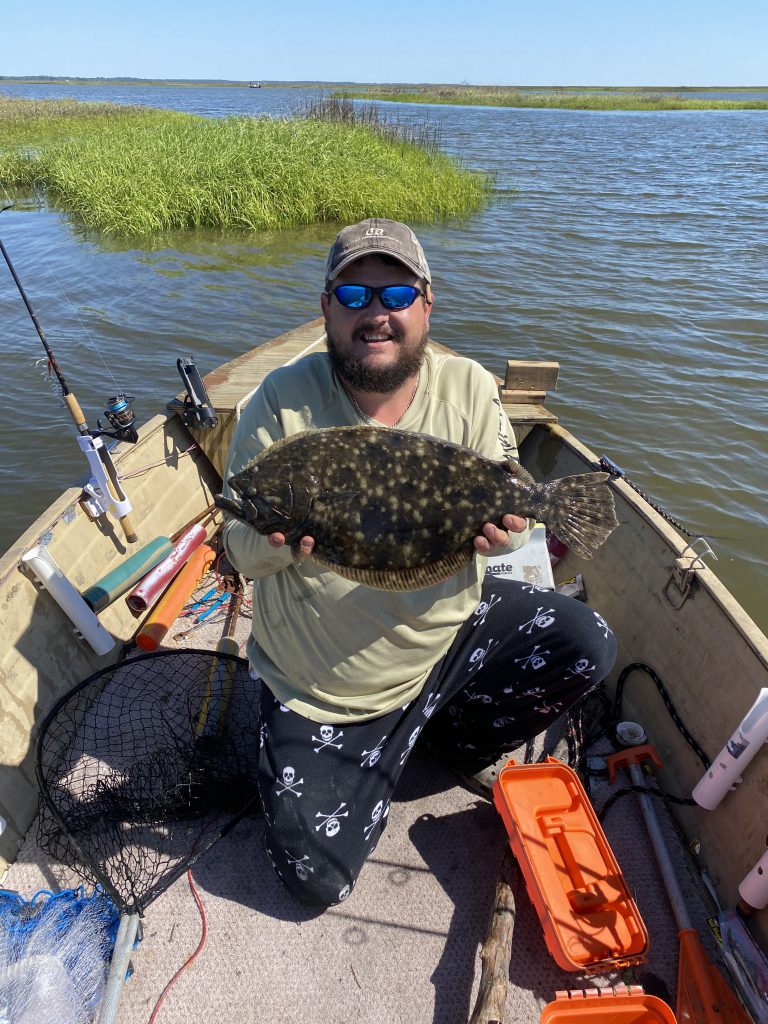 Chris Franklin with a 24″ flounder (released) that bit on an artificial shrimp in the lower Cape Fear River during the rising tide.

Blues and spanish mackerel are pushed along the beaches. They’re coming within casting distance, mostly in early morning and evening hours.

Nearshore anglers are trolling Clarkspoons and landing spanish mackerel. As more bait moves into the area over the next few weeks, look for the action just off the beach to pick up.

Mark, of The Tackle Box, reports that red drum fishing has been solid, with schools spread out from inshore creeks out to nearshore reefs.

Spanish mackerel fishing has been on fire, with plenty of bait now pushed along the beaches. Spoons pulled behind #1-2 planers or trolling sinkers are providing most of the action. Long leader lines have been key in this fishery, with 35’ of 20 lb. fluorocarbon not being uncommon.

King mackerel action has been getting really good as the kings work closer to the nearshore areas.

Cobia are holding over structure in the 12 mile range.

Anglers running out to the deeper wrecks are catching African pompano, grouper, kings, and tons of American red snapper.

Gulf stream trips are starting to catch scattered dolphin in a variety of sizes.

A mix of both yellowfin and blackfin tuna are hitting the trolled ballyhoo.

Jim, of Keep the Sea Inshore Charters, reports that inshore anglers found the redfish that had begun their transition into summertime haunts actually scatter and lay low through the recent fronts.

During this same period, the speckled trout action filled in nicely for the redfish. Anglers located some good-sized fish pushed up against grass banks and deeper channels in the inland secondary creeks. Vudu shrimp fished under Four Horseman popping corks have been consistently productive. As for artificial bait color, the saying “if it ain’t chartreuse, then there ain’t no use” has held true for the lower Cape Fear region.

Flounder are being caught by anglers slowly dragging soft plastic paddletails and jerk shads in the area creeks.

Though winds have made nearshore fishing tough, gray trout are holding tight to structure in the 18-35’ range. Both jigging smaller bucktails and soaking bait are producing strikes.

Some nice-sized redfish are scattered on these same reefs and around the inlets for anglers fishing Carolina-rigged baits.

Clarkspoons under #1 planers are providing good action with spanish mackerel and bluefish. Both species can also be found actively feeding on the surface both early and late in the day. Anglers have been doing great with 1/2 oz. Big Nic Spanish Candies cast into the frenzy.

Cobia should make more of a showing as weather patterns stabilize and anglers spend more time off the beach.

Mark, of Angry Pelican Charters, reports that solid numbers of king mackerel have moved into Long Bay and are hitting both dead and slow-trolled live baits. With the weather fluctuating much over the past few weeks, these schools’ movements towards shore have been slow. The action should be getting better as temperatures rise and weather patterns stabilize.

Spanish mackerel are holding along the shallow beachfronts for anglers trolling spoons.

Ryan, of Fugitive Charters, reports that bottom fishing trips have been on fire over the past few weeks.

Grouper action has been steady since keeper season opened up, with some fat fish holding on ledges and rocks in the 100’+ range.

Large beeliners and grunts are staged over these same structured areas, and they’re feeding on cut baits.

Amberjack are moving in and striking live baits fished over reefs. 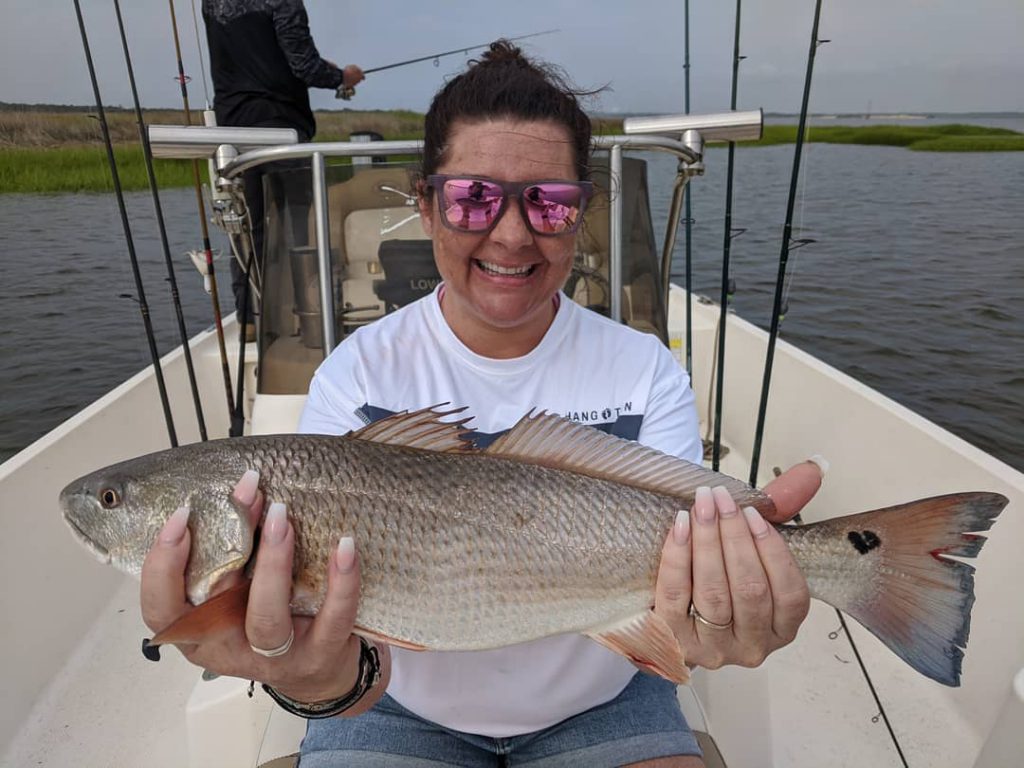 Whitney Barber, of Lexington, KY, hooked this redfish with a Vudu shrimp suspended beneath a Four Horsemen popping cork. She was fishing the lower Cape Fear River with Capt. Jim Hawkins of Keep the Sea Charters.

Wally, of Oak Island Fishing Charters, reports that inshore anglers are catching strong numbers of red and black drum in the mainland creeks. Look for these smaller schools to be holding in the deeper holes around oyster beds and near structure. Fresh shrimp has been working best for both species.

Just off the beach, spanish mackerel fishing has been very good. Trolling Clarkspoons has been great for locating schools not feeding on the surface.

King mackerel are mostly holding out in the 15 mile range. These schoolie-sized kings are being caught with slow-trolled live baits and dead cigar minnows.

Grouper fishing has been solid since the season opened. There are still quite a few good-sized fish holding on the shallower structure.

Lynn, of Ocean Crest Pier, reports that bottom fishing has been very productive, with both whiting and croakers hitting bait shrimp or artificial bait strips.

With bait moving in around the piers, schools of bluefish are becoming more common for anglers casting Gotcha plugs and soaking bottom rigs.

Spanish mackerel have arrived and are hitting casting jigs.

Cindy, of Oak Island Pier, reports that anglers are catching healthy numbers of spanish mackerel while sight-casting at surface-feeding schools.

Plenty of bluefish are being caught with this same casting tactic, with bottom rigs also producing a few bites.

Anglers fishing both early and late in the day are landing some speckled trout.

A few good-sized black drum are feeding on fresh shrimp.