Angie, of Dutchman Creek Bait and Tackle, reports that backwater anglers are catching good numbers of red and black drum in the waterway.

Surf anglers are finding a mixed bag of bottom fish and speckled trout off the piers in the early mornings.

King mackerel have been the main catch for anglers trolling in the 10-20 mile range, and most of the consistent mahi action has been from out past the Tower.

Red drum are scattered throughout the inshore areas and feeding on cut or live baits, and black drum and sheepshead are staged up tight around dock pilings and bridges.

Plenty of flounder are being caught around waterway docks and deeper inshore ledges.

Nearshore anglers in the 85’ range are catching some good-sized king mackerel and amberjack. 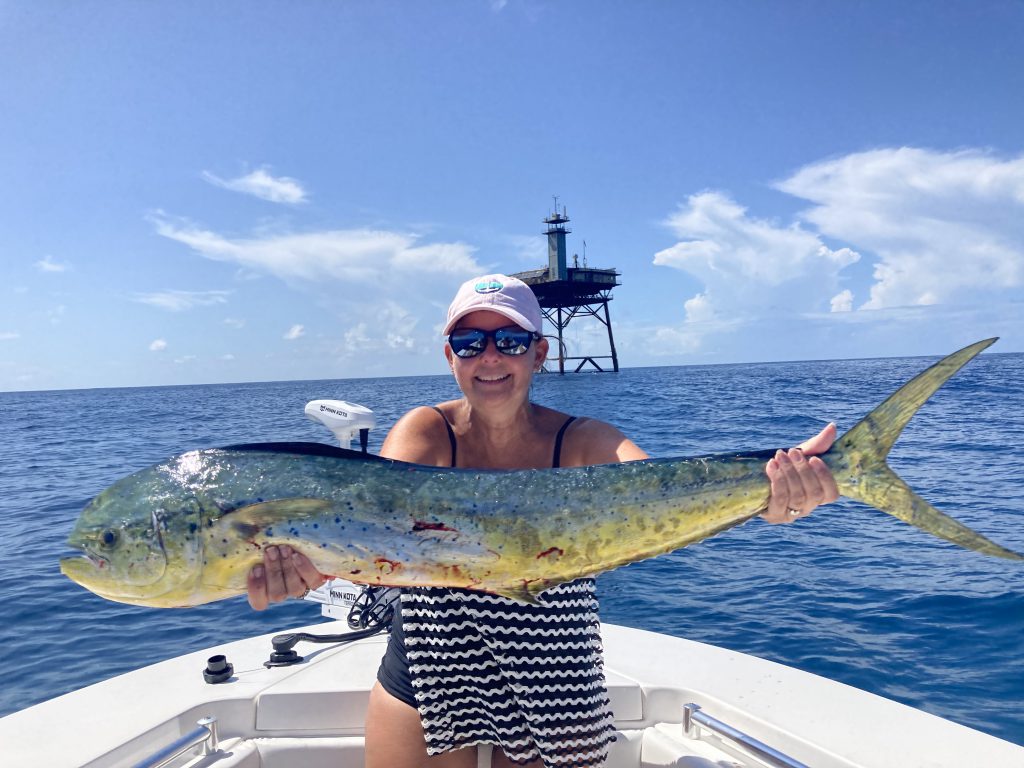 Robin Hinton, from Zebulon, caught this dolphin on a skirted ballyhoo at Frying Pan Tower.

Garrett, of Oak Island Sporting Goods, reports that red drum numbers have been great for anglers working the area’s creeks.

Black drum are staged up around docks and holes with nearby oysters in the creeks and ICW.

Speckled trout are holding a bit deeper with the warm summertime temperatures, but their feeding remains active on live baits.

There are big numbers of flounder being caught, with many large flatfish in the mix. Just about any live bait or jig bounced along the bottom is producing strikes.

Pier and surf action has been good as well. A variety of black drum, pompano, croakers, and speckled trout are all being landed.

Mark, of Marine Service Pro, reports that inshore red drum and flounder action has been on fire for anglers fishing live bait.

A few scattered speckled trout are being caught in deeper holes and along grass banks.

In the Cape Fear and just off the beach, anglers have been targeting the large schools of tarpon that are taking advantage of all the bait in the area. Carolina-rigged live or cut pogies have produced some big bites.

King mackerel are being caught from the beachfronts out to 20 miles while trolling a variety of live baits, dead baits, and spoons.

Out in the 20+ mile range, anglers are catching scattered dolphin and some good-sized cobia.

Jim, of Keep the Sea Inshore Charters, reports that flounder and redfish continue to keep inshore anglers busy. The red drum are feeding best early and late with Rapala Skitterwalks and spinner baits being most productive on the shallow inshore flats. Live mullet on jig heads or Carolina-rigs have helped anglers stay on the bite once the fish slide down into deeper, cooler water around mid-day.

The inshore flounder have been keyed in on live bait fished in the deeper holes. The flatfish are also staged up around the inlets and nearshore structures. These deeper areas will produce a mixed bag of bottom fish, too. Carolina-rigged live baits and 2 oz. bucktails will generate most of the strikes.

Mark, of Angry Pelican Charters, reports that king mackerel fishing has been good for anglers running out on nearshore trolling trips. There are plenty of schoolie-sized kings staged over structure, with some larger ones (15+ lbs.)  mixed in.

Close to the beach, spanish mackerel are being caught with the go-to Clarkspoon and planer setups.

A few false albacore are mixed in the action and hitting trolled spoons.

Ryan, of Fugitive Charters, reports that spanish mackerel action off the beach has been steady for anglers trolling Clarkspoons behind #1 planers.

Large tarpon (up to 100 lbs.) are being caught on live baits fished not far off the beach.

King mackerel and scattered cobia are mixed in the 7-10 mile range, and anglers in the 15-25 mile range are landing a few mahi.

Bottom fishing has been good in the 80-120’ range. Gags, scamps, gray snapper, amberjack, and African pompano are all mixed in the trip counts. 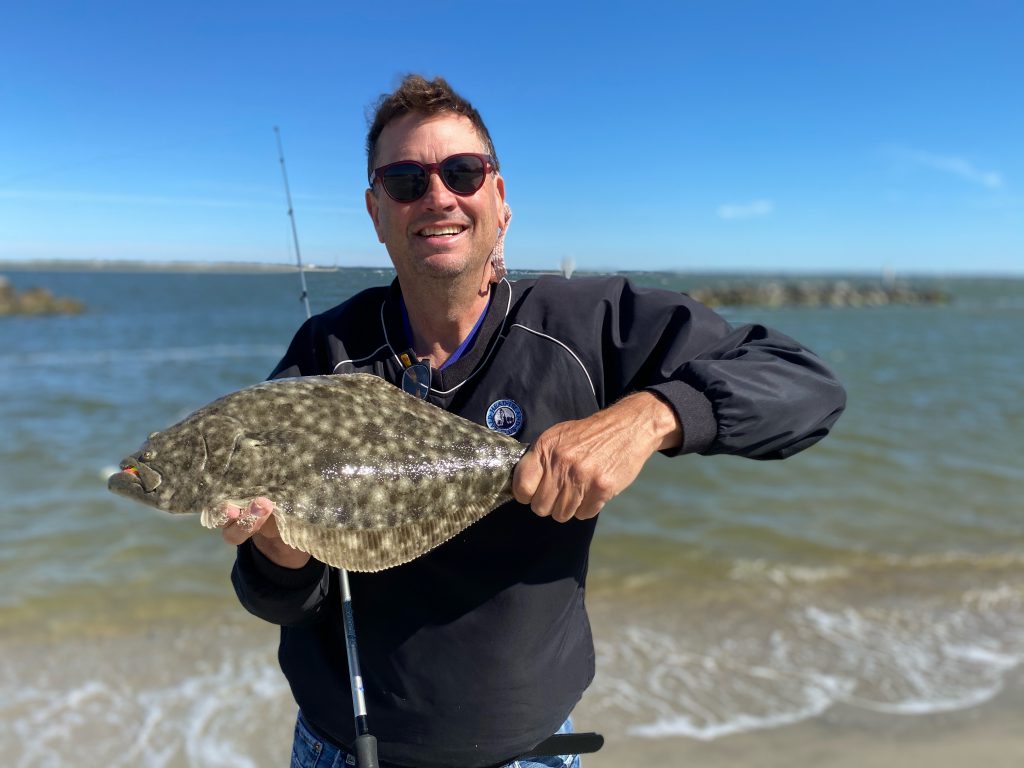 Bill Power caught (and released) this flounder on a white and pink pigtail and neon yellow Gulp minnow while fishing the rocks behind Bald Head Island.

Wally, of Oak Island Fishing Charters, reports that good numbers of spanish mackerel are being caught from the beaches out to nearshore structure in the 50’ range. Trolling Clarkspoons has been producing most of the action.

Plenty of king mackerel are around in the 50’+ range, with some scattered numbers closer to the beach. Trolling live and dead baits has worked well in both areas.

These baits are also getting strikes from some of the sharks hanging around the structure.

Lynn, of Ocean Crest Pier, reports that speckled trout are feeding on live shrimp, with the best action being early and late in the day.

Live baits fished off pin rigs have been getting some king mackerel action, now that the kings have pushed in.

A few tarpon (up to an estimated 100 lbs.) have been hooked on the same live baits fished off the end.