John, of Dutchman Creek Bait and Tackle, reports that inshore anglers have been catching good numbers of speckled trout, redfish, and black drum. All three of these species are moving into a winter pattern where they push into the area’s creeks to holdover as the colder water temperatures settle in.

Offshore runs have been producing wahoo and blackfin tuna.

Going into winter, anglers can expect to see some mix of all the above listed inshore and offshore species. 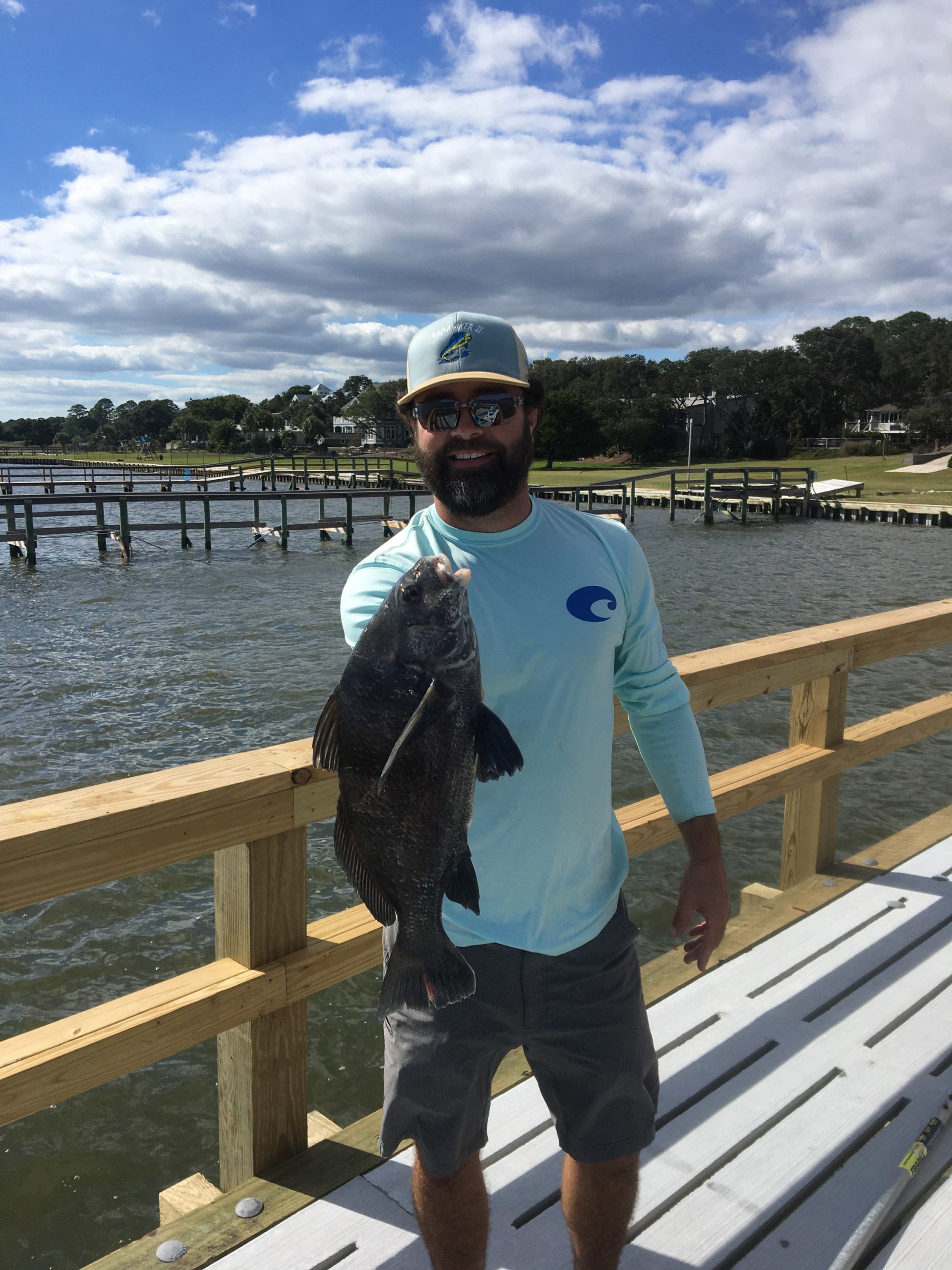 Brian Deutsch with the slot black drum he landed from a Southport pier using shrimp.

Donnie, of Wildlife Bait and Tackle, reports that anglers have been finding a few speckled trout while fishing both live and artificial baits. These fish have started to move away from their fall holes and up into deeper areas of canals and creeks where they will hold over the next few months.

Redfish are mixed in in most of the same areas as the trout, with some also being caught with bottom-rigged baits fished around area docks.

The red drum and trout will remain the main targets going into the winter.

Josh, of Oak Island Sporting Goods, reports that speckled trout action has been focused to areas in the backs of mainland creeks. Anglers are having success while fishing artificial shrimp baits under popping corks. Casting these setups around oyster beds and deep holes beside sandbars has been producing strikes.

Surf anglers have been seeing pockets of large whiting up and down the beach.

Going into winter, specked trout will remain active throughout the colder months. Red drum will be mixed in but are more weather dependent. Target the reds on shallow flats during high sun periods or stretches of warm weather.

Mark, of The Tackle Box, reports that inshore anglers have been finding good numbers of black drum around dock pilings and oyster beds along the ICW.

Trout fishing has been good as well. Both MirrOlures and popping corks with Vudu shrimp have been getting action from the trout as the trout make their seasonal transition.

Offshore anglers are still finding some king mackerel moving around with the warm water, but warm water is on its way out.

Bottom fishing anglers are finding big black sea bass, plenty of beeliners, and even some cobia that are still around the offshore structures.

Moving further into winter, look for the offshore bottom fishing to get even better. The large black sea bass, in particular, get thick and aggressive, and Gulf Stream trips will be finding some wahoo while trolling skirted baits.

Inshore anglers will continue to find black drum and trout to be actively feeding, as long as weather and water temperatures don’t dip too far down.

Jim, of Keep the Sea Inshore Charters, reports that the winter fishery is focused around the “big 3” inshore species: striped bass, speckled trout, and red drum. This cool season trifecta can all be caught alongside each other from the same banks with the same baits.

A white/chartreuse tail Gulp shrimp soft plastic is difficult to beat going into late winter. Simply rig it on a 1/4 oz. jig head and you have all the tackle you need for these three species.

Anglers targeting speckled trout can also increase their odds by using MirrOlures as the water temperatures get colder. Being able to work these baits slowly is a major reason for their winter success. On the coldest days, no action is needed and simply “dead-sticking” the bait will be the tactic to find strikes. It’s also a great time for the anglers who like to sleep in, as the afternoon sun will raise the water temperatures a little and pick up the bite.

Look for red drum to be schooling up over mud flats in the backs of mainland creeks on sunny afternoons. On cloudy days, search in the deeper holes in creek bends for these tight groups.

Another great fishery can be found in the Brunswick and Upper Cape Fear River systems where striped bass hold all winter. These fish can be caught by throwing larger (5-6”) jerk shads around heavy structure, such as shoreline stumps and pilings.

Mark, of Angry Pelican Charters, reports that bottom fishing has been relatively steady, even with the changing weather conditions. Grouper fishing is coming to its finish, but both large black sea bass and vermilion snappers will be plentiful well into February.

Anglers are still finding some bonus trophy-class redfish nearshore, as some of these fish continue to migrate through the area.

Nathan Hagedorn (left) with a 30 lb. king, and Travis Crowder (right) with a 28 lb. king. Both were caught at the Shark Hole on a black/silver Yo-Zuri while fishing out of Oak Island with Brandon Burgess.

Ryan, of Fugitive Charters, reports that bottom fishing anglers have been targeting the hit or miss grouper action in the 80-100’ range, and king mackerel are out in the 25-35 mile range for anglers pulling dead bait rigs.

Some warmer waters are still swirling off the break, bringing catches of blackfin tuna and even scattered late season mahi into the counts.

Big bluefin tuna are being spotted in the area, and anglers should hear of more sightings going into these winter months.

Heading further into winter, king mackerel will start to push into areas around the Tower, and then out to the 40+ mile range when water temperatures fall further.

Wally, of Oak Island Fishing Charters, reports that inshore anglers have seen some great trout fishing all month while floating live shrimp. This bite continues well into the winter with the fish moving up into creeks in search of holes to hold in through the cold water conditions.

Offshore grouper fishing has been good as the season starts to wrap up. Most anglers have been finding success with cut baits fished on structures in the 100’ range and deeper.

Cheri, of Oak Island Pier, reports that anglers are seeing all the wintertime regulars while bottom fishing with fresh dead shrimp. Croakers, whiting, black drum, and speckled trout are all a part of the daily mixed bags.

Some bonus red drum are being caught on Carolina-rigged cut baits.