Angie, of Dutchman Creek Bait and Tackle, reports that speckled trout fishing has been good for anglers getting on the water early with live shrimp. A few red drum are mixed in the backwater action.

Surf anglers are catching good numbers of whiting, and some bluefish are being landed by anglers casting jigs to busting fish from the sand.

Nearshore anglers are finding a mix of spanish mackerel and kings at the nearshore wrecks. Further off the beach, king mackerel are much thicker in the 15+ mile range.

Cobia are around, with most of the action being at these deeper structured areas, and mahi are starting to show up inside of the Stream.

Josh, of Oak Island Sporting Goods, reports that backwater fishing has been good now that baitfish have showed up inshore. Live shrimp are pushing out of the creeks and getting the redfish fired up. Areas from the ICW to the marshes behind Bald Head Island are holding smaller groups of reds feeding on live baits and hitting topwater plugs.

Nearshore anglers are reporting plenty of king mackerel staged up over structure. Live bait has been the most productive in getting strikes, but it also attracts attention from the large numbers of sharks around as well.

Mahi are moving in closer and scattering in the shallower offshore areas now that water temperatures have hit their summertime levels. Anglers are finding action with both live and dead baits trolled around structure in the 20+ mile range. 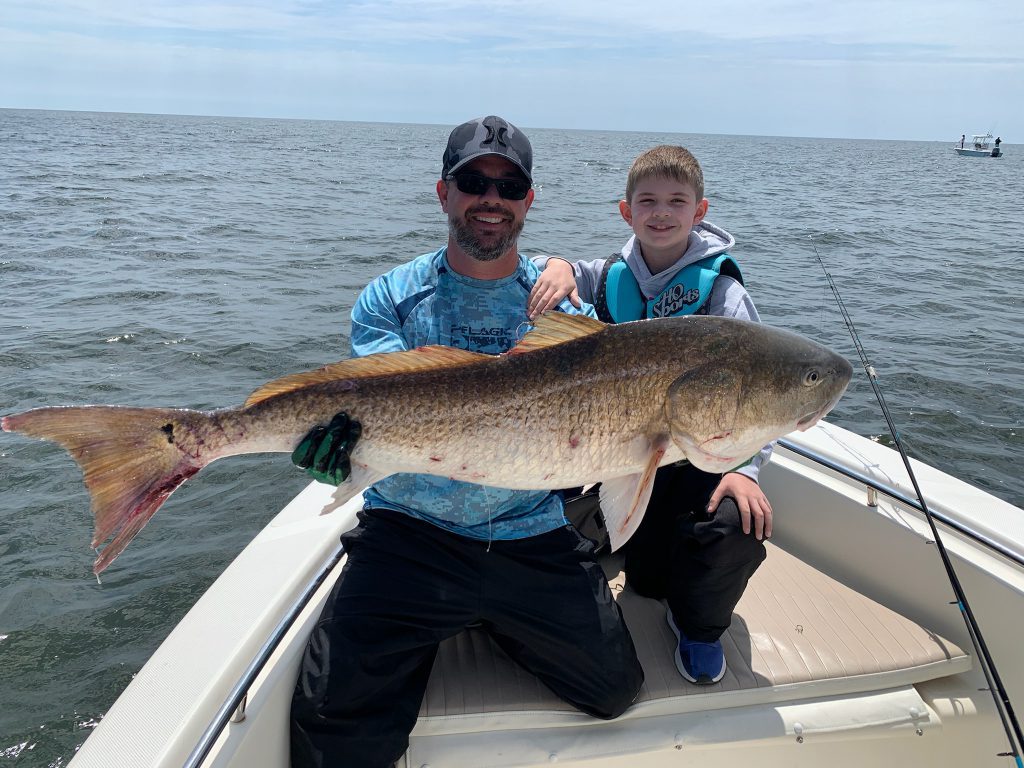 Brayden and Chris DeHart with a 43″ citation drum that hit a shrimp while fishing Yaupon Reef off Oak Island.

Mark, of The Tackle Box, reports that rough weather patterns have nearshore anglers finding the typically good spanish mackerel action a bit hit or miss. When conditions are stable, baitfish schools will tighten back up and allow for comfortable fishing days for anglers to successfully troll.

King mackerel are being found basically everywhere, from the beaches out to structure in the 15+ mile range, and cobia are hanging around nearshore reefs in the 8-12 mile range.

Peanut-sized dolphin following their summer patterns are moving shallow and can be found in the 10-15+ mile range.

A few tarpon have been seen off the piers, and they will also be scattered around for the nearshore live bait anglers.

Spadefish are starting to trickle into the nearshore reefs. They get better going into July. Structure from two miles out to the Tower will hold good-sized schools that feed on pink jelly balls.

Inshore anglers are finding strong red drum action. The influx of baitfish have the smaller schools aggressively feeding. Some over-slot drum are scattered, as they move inshore with the bait.

Flounder action has been hot for anglers fishing Carolina-rigged live baits, and speckled trout and black drum are both mixed in the daily counts, with live shrimp being the top producing bait for both species.

Sheepshead are staged up around pilings, oysters, and other inshore structure.

Jim, of Keep the Sea Inshore Charters, reports that inshore water temperatures have climbed into the 80s and this has the overall bite hot across all species.

Good numbers of mid- to upper-slot red drum are actively feeding on bait schools around structure and up on the flats. Topwater plugs are productive on these shallow flats and along grass banks early and late in the day. Switching over to Z-Man and Matrix Shad soft plastics rigged on 3/16 oz. Texas Eye jig heads has worked well in deeper waters as the sun gets high.

Some speckled trout are feeding alongside the reds while using the same tactics.

A good-sized class of flounder (17-22”) are mixed in for anglers working baits along the bottom.

Nearshore action has been holding the early summer variety of fish. Anglers are finding everything from flounder, redfish, and gray trout to bluefish, sharks, and scattered cobia. Live menhaden fished on Carolina rigs has been the most productive setup, with 2 oz. Spro bucktails tipped with Gulp running a close second.

Spanish mackerel and kings are holding over this same structure and are hitting live baits and trolled spoons.

Mark, of Angry Pelican Charters, reports that nearshore anglers have been finding plenty of spanish mackerel off the beaches.

Kings are mixed in, though a majority of the kings are holding over structure further offshore.

These deeper wrecks and reefs also have schools of cobia staging on them, and the cobia are feeding on live baits.

Mahi are now moving inside of the break. These mahi schools break up and scatter throughout the nearshore waters as water temperatures rise.

Some king mackerel are scattered along the beaches, but most of the shallower fish are smaller.

Anglers have been spotting tarpon outside of Oak Island.

Bottom fishing has been steady on the deeper structure. Grouper, snapper, and large black sea bass are all hitting cut baits.

Cobia are mixed in around the offshore structures.

Trips further offshore are hooking into sailfish and African pompano. 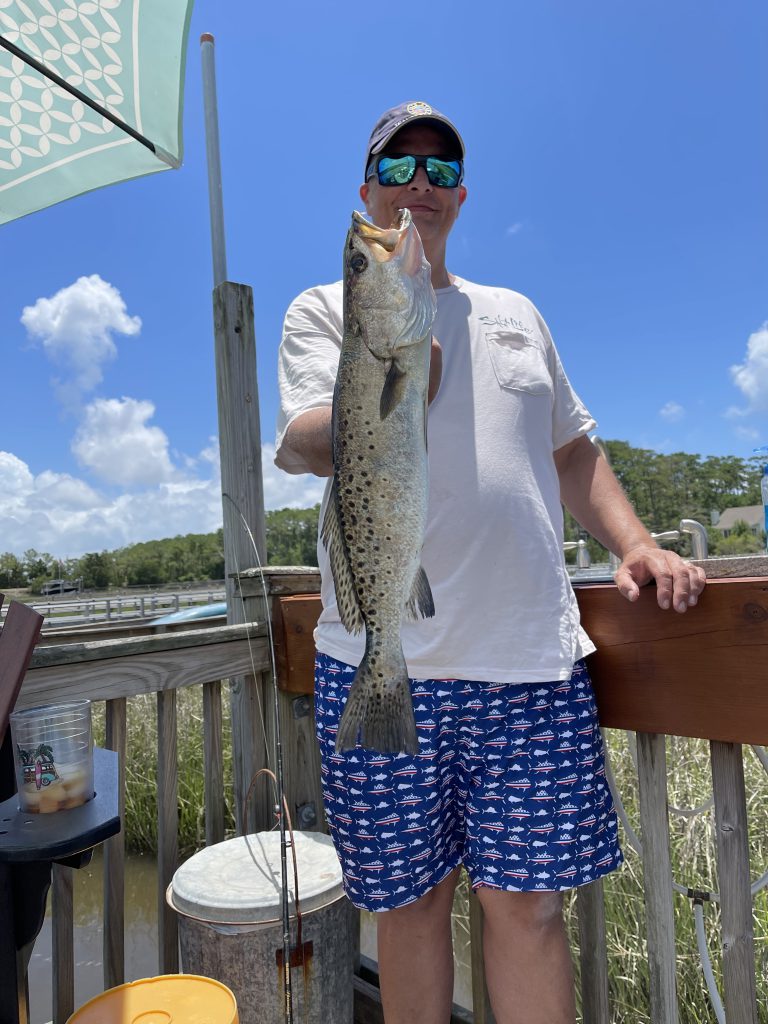 Jason Oliver, from Raleigh, landed this trout on a small mullet minnow while fishing the Caswell Beach area.

Black drum are staged up in the deeper holes and nearby structure, and they’re feeding on shrimp.

The nearshore bite has been predominantly spanish mackerel and sharks.

Offshore trips have been focused on the very good bottom fishing action, with the 20+ mile range holding good-sized grouper and red snapper.

Lynn, of Ocean Crest Pier, reports that speckled trout fishing has been good for anglers rigged with live shrimp or soft plastics, and a few red drum are hitting Carolina-rigged cut and live bait.

Bottom fishing has been consistent for whiting and croakers.

Pompano have moved onto the beaches, though the bite has been scattered depending on water clarity.

Teresa, of Oak Island Pier, reports that a mix of whiting and croakers are the most common catches.

A few spanish are around, but the bite is better with cleaner water. When the wind holds and the water clears up, schools show up much more often.

Anglers fishing off the end are catching some good-sized king mackerel (up to 24 lbs.).