Angie, of Dutchman Creek Bait and Tackle, reports that the large trophy red drum have been running as they migrate through the area on their way south. Anglers fishing Carolina-rigged cut pogies and other fresh chunk baits are finding action around both nearshore structures and along the beaches.

Anglers are also enjoying great numbers of spanish mackerel running along the beaches.

King mackerel fishing has been overall up-or-down compared to past seasons, but water temperatures are still warm and these schools should stick around for a bit before pushing back offshore. 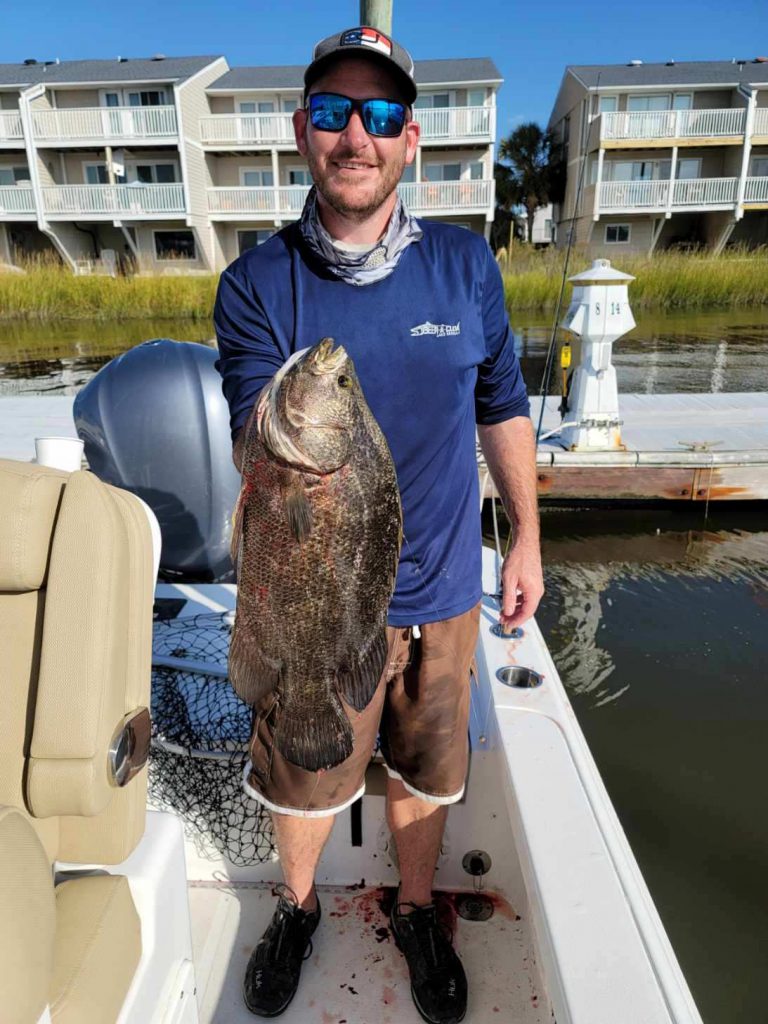 Hunter Tull caught this 7.4 lb. tripletail while dropping a live mullet under his dock in the Southport area.

Donny, of Wildlife Bait and Tackle, reports that anglers fishing cut baits have been catching some big red drum from the beaches out to nearshore structures.

Schools of spanish mackerel have been running from close to shore out to structure in the 2-3 mile range.

Nearshore king mackerel fishing has been hit or miss, but there’s plenty of live bait still around to keep them occupied and in the area.

Surf anglers are reporting small runs of spot and a bunch of smaller whiting.

On the inside, speckled trout are starting to show up in good numbers, and puppy drum are being caught in the mainland creeks.

Wayne, of Oak Island Sporting Goods, reports that surf anglers are seeing tons of finger mullet still running in the surf. With all this bait around, it has pulled red drum (both bulls and slots) into the surf zone.

Some schools of spanish mackerel are holding tight to the beach to feed on these same bait schools.

Nearshore anglers have been seeing great spanish mackerel fishing. A variety of tactics from sight-casting glass minnow style jigs to trolling spoons and live baits are all producing strikes.

King mackerel fishing has been hit or miss this season, with fish homed in on the huge amounts of bait that can be found from the beachfronts out to 10 miles.

Mark, of Marine Service Pro, reports that anglers have been doing well catching king mackerel. This time of year, anglers can find the kings just about everywhere from the beachfronts out 10+ miles.

A few cobia have also been brought in from anglers working some of plentiful bait balls off the beach.

Jim, of Keep the Sea Inshore Charters, reports that the speckled trout bite has been focused on topwater plugs during the early morning and late evening hours. The cooling water temperatures will soon fire this fishery off and it will become the main target of area anglers.

Slot redfish are feeding well on most days, with topwaters also providing plenty of action until the sun gets too high. After mid-morning, anglers are having success in switching over to soft plastics or live finger mullet on jig heads.

Some nice flounder are being caught in the area as they make their way towards the inlets.

Nearshore anglers are finding schools of false albacore and spanish mackerel chasing baits from just outside the inlets to nearshore structure. Smaller, shiny metal offerings that resemble glass minnows are the best lure for “ripping” just below the surface around these feeding frenzies, and getting out there early has been key.

Mark, of Angry Pelican Charters, reports that nearshore fishing has been centered around the schools of false albacore and spanish mackerel feeding on bait balls off the beach. Spanish mackerel have been plentiful this year, and as water temperatures remain warm, the bait will keep the spanish around.

Bottom fishing has been good, with consistent catches of triggerfish and vermilion snapper.

King mackerel fishing has been steady, and the fish are being found from the nearshore beachfronts out over the deeper structures.

Ryan, of Fugitive Charters, reports that nearshore anglers are finding good fishing as the spanish chase bait balls of glass minnow sand mullet down the beaches. There has been quite a few large fish (to 7-8 lbs.) mixed in.

Anglers running off the beach to do some bottom fishing are finding steady action on a mixed bag of species.

Offshore anglers also look forward to the wahoo action picking up. With all the warm water around, these fish are scattered from the Gulf Stream into nearshore structure where some king anglers are landing them on live bait. 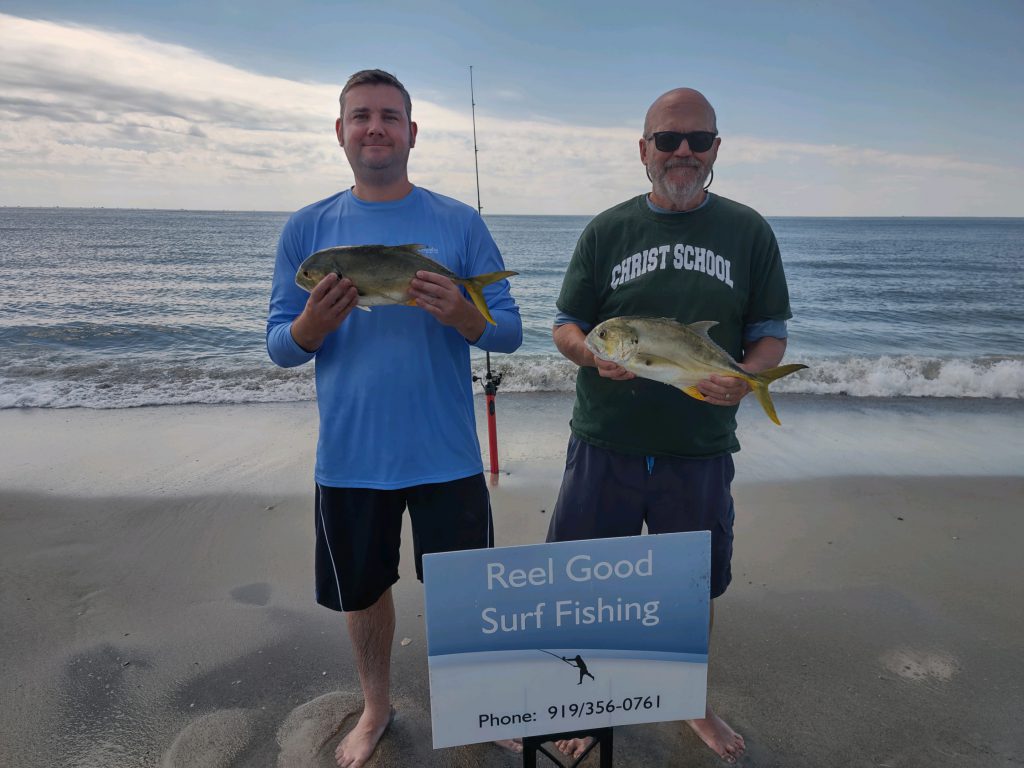 Chris and Don McLennan, of Chapel Hill, landed these jacks on Carolina-rigged live finger mullet from the Oak Island surf. They were fishing with Wayne Ayers of Reel Good Surf Fishing Charters.

Wally, of Oak Island Fishing Charters, reports that schools of large spanish mackerel have been hanging around the beachfronts for anglers casting jigs and fishing live bait.

King mackerel are mixed in anywhere from the beach out to 5+ miles.

Inshore anglers have been seeing some good action on black drum around oysters and docks. As these inside waters cool, expect to see the action get even better over the coming weeks.

Lynn, of Ocean Crest Pier, reports that it has been mainly trophy red drum fishing that has taken anglers’ attention. The pier has been seeing runs of fish both in the mornings and late evenings for anglers fishing fresh cut baits, but the bite is starting to wane.

Cyndy, of Oak Island Pier, reports that anglers doing some bottom fishing have been finding pompano hanging around the pilings.

Schools of spanish mackerel are out on the beaches feeding on bait balls, and anglers are having success casting jigs at surface-feeding action.

Those out fishing cut baits in anticipation of red drum are mostly landing some pesky rays.