Tim, of Wildlife Bait and Tackle, reports that inshore anglers have been finding good action on both black and red drum. The schools of mullet starting to shift around in the inshore waters have the fish fired up and actively feeding regardless of any warm water temperatures.

Flounder season was very good in the area, and anglers fishing live baits around structure for drum will still find some flatfish.

Speckled trout action has been scattered and not exactly great. This fishery starts to get better from now into the next month.

Nearshore anglers have seen a large uptick in spanish mackerel and king mackerel action. The mullet run starting has both species more actively feeding on these bait balls pushing out of the inlets and along the beachfronts.

Garrett, of Oak Island Sporting Goods, reports that really good numbers of slot-sized red drum are being caught both inshore and along the beachfronts. Fresh shrimp fished on Carolina-rigs has outpaced mullet with all the bait schools around.

The inshore docks, pilings, and bridges are holding good numbers of sheepshead and black drum. Fresh shrimp works great for both species, with small crabs also producing plenty of strikes.

Speckled trout fishing is picking up as it gets closer to fall. Live shrimp fished under corks has been the most productive tactic.

Surf anglers are finding action, too, especially with bottom fishing that has been producing some large pompano (both in the surf and off local piers).

Great numbers of spanish mackerel (to 4 lbs.) are feeding actively on bait balls from the surf zone out to nearshore reefs, and king mackerel (from 12-40 lbs.) are moving in now that the early stages of mullet migrations have begun.

Offshore anglers are mainly focused on the solid bottom fishing action. Keeper black sea bass, big beeliners, and grouper (as well as scattered mahi) are all part of the mixed bag. 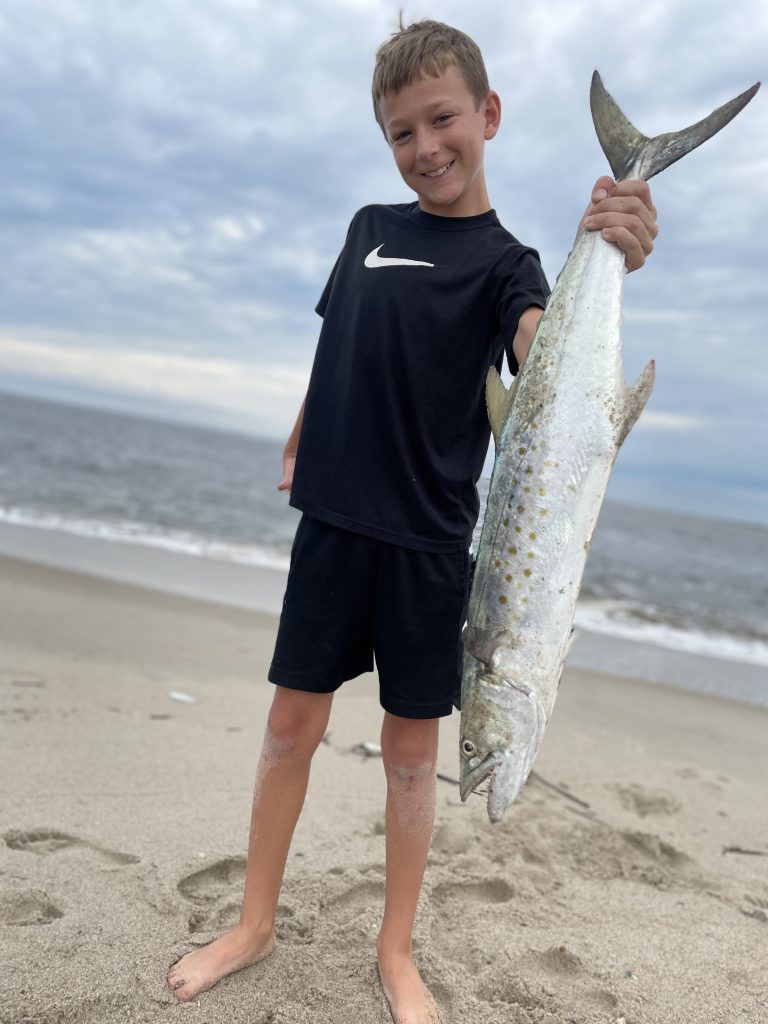 Mark, of The Tackle Box, reports that the flounder anglers found a few nice fish while targeting inshore structures with live bait.

Slot-sized redfish and speckled trout action is getting better in area creeks now that bait is moving around and temperatures are cooling. October sees these two species becoming more common targets as the mullet run picks up even more.

Nearshore anglers have found spanish mackerel fishing to be on fire. A good amount of large to citation-class spanish are feeding on live baits from the beachfronts out to nearshore reefs.

Most of the king mackerel action is still in the 10+ mile range, but the bait pushing out of the inlets will see these kings move closer.

Offshore anglers are experiencing great bottom fishing. Grouper, beeliners, and some good-sized triggerfish are all being caught over structure in the 20+ mile range.

Jim, of Keep the Sea Inshore Charters, reports that there are some solid indicators of a strong speckled trout season to come. There has already been an aggressive topwater bite for anglers on the water early or late. Targeting areas such as grass banks and oyster bars in the Cape Fear and along the ICW is producing strikes.

There are plenty of red drum mixed in with the trout. Soft plastics in mullet or shrimp patterns rigged on jig heads or under popping corks are working well.

Flounder season is over, but there are plenty of flatfish staged up in these inshore areas. Larger (4-5”) soft plastic jerk shads fished on heavier jig heads are producing bites.

Anglers fishing nearshore structure are finding increasing numbers of gray trout, redfish, and flounder around. Live mullet, menhaden, and bucktails are all having success.

False albacore are moving onto the beach and surface-feeding on bait balls. Casting Big Nic Spanish Candy jigs at these feeding frenzies is generating plenty of action.

Bull red drum fishing was good in the northern areas of the state. Local anglers look forward to those schools breezing through the area as they migrate after finishing their spawning cycles. 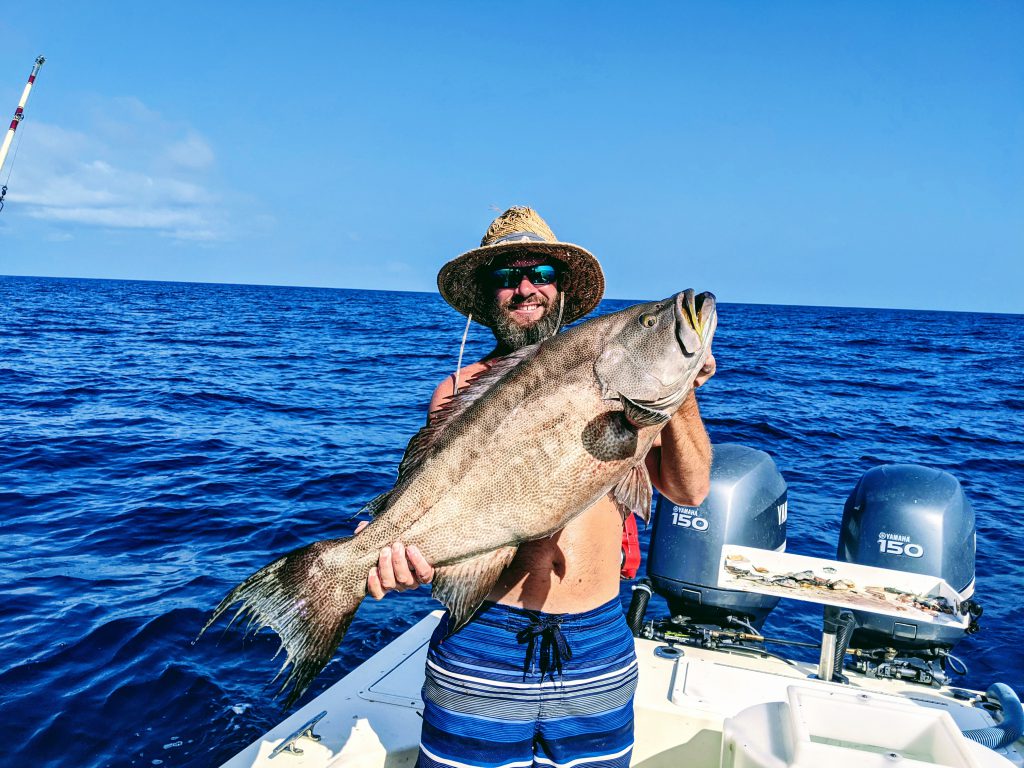 Jason Jones with a 24 lb. scamp grouper that fell for a piece of live bait while fishing offshore of Southport.

Mark, of Angry Pelican Charters, reports that weather changes have pushed a ton of large spanish mackerel onto the beaches, as these schools feed on all the bait starting to push out of the inlets. Look for this bite to stick around through most of October.

King mackerel are mixed in the action, with numbers along the beach only picking up going into fall.

Offshore action has been focused around bottom structure, with good numbers of beeliners, keeper black sea bass, and triggerfish in the mix.

Ryan, of Fugitive Charters, reports that anglers have been catching some over-slot red drum around nearshore structure and holes.

Big schools of mullet and pogies are pushed off the beachfront and have changed the nearshore action for the better.

Large spanish mackerel (to 9 lbs.) are schooled up under the bait balls for anglers fishing both live bait and jigs.

King mackerel fishing has been a bit sporadic. The majority of fish are just starting to push nearshore from out in the 8-mile range now that temperature and bait patterns have changed.

Most king mackerel action is holding deeper, but with weather and bait patterns transitioning, look for the kings to get more active.

Nearshore structures are still full of flounder, though keeper season ending has anglers moving on to different targets.

Offshore trips have been producing grouper and mahi. In the upcoming weeks, water temperature changes should congregate fish and anglers should start seeing better numbers of wahoo.

Lynn, of Ocean Crest Pier, reports that quite a few nice-sized red drum are being caught now that bait has pushed along the beaches, and scattered flounder are being caught on bottom-rigged bait.

Spanish mackerel fishing is picking up, with good-sized fish being landed using both live baits and casting jigs.

Cheryl, of Oak Island Pier, reports that spanish mackerel numbers are picking up following water and bait changes in the area.

King mackerel action is also getting better now that waters have begun to cool and bait is all over the beachfronts. Anglers anticipate strong fishing, as October tends to be a great month for kings.