Angie, of Dutchman Creek Bait and Tackle, reports that surf anglers have been catching some large whiting, spots, and croakers with fresh baits on bottom rigs. Cut baits have been producing mostly sharks.

Inshore anglers are finding some nice-sized trout holding in deeper holes up against the shoreline. Live baits fished under floats have seemed to be a favorite setup.

Flounder have been just about everywhere in the area, and both Carolina-rigged live baits and soft plastics will be productive rigs.

Garrett, of Oak Island Sporting Goods, reports that big schools of mullet and pogies are inshore and have the action fired up despite any dirty water conditions.

Speckled trout remain in the mix for anglers casting MirrOlures and live shrimp under corks.

Black drum are being caught in deeper holes around oyster beds, docks, and creek mouth. Fresh shrimp fished on Carolina rigs have produced most of the strikes.

Flounder seem to be absolutely stacked up on each other in the backwater areas. A variety of soft plastics and bottom-rigged live baits are getting action.

Anglers in the surf zone and on local piers are seeing lots of action on a mixed bag of speckled trout, red drum, black drum, and even tripletail.

Nearshore anglers are reporting spanish mackerel schools to be pushing closer to the beaches after spending the last month or so in deeper waters. Anglers bottom fishing at these nearshore structures are catching quite a few flounder while targeting the other bottom feeders.

King mackerel are still holding out in the deeper end of the 10-mile line. 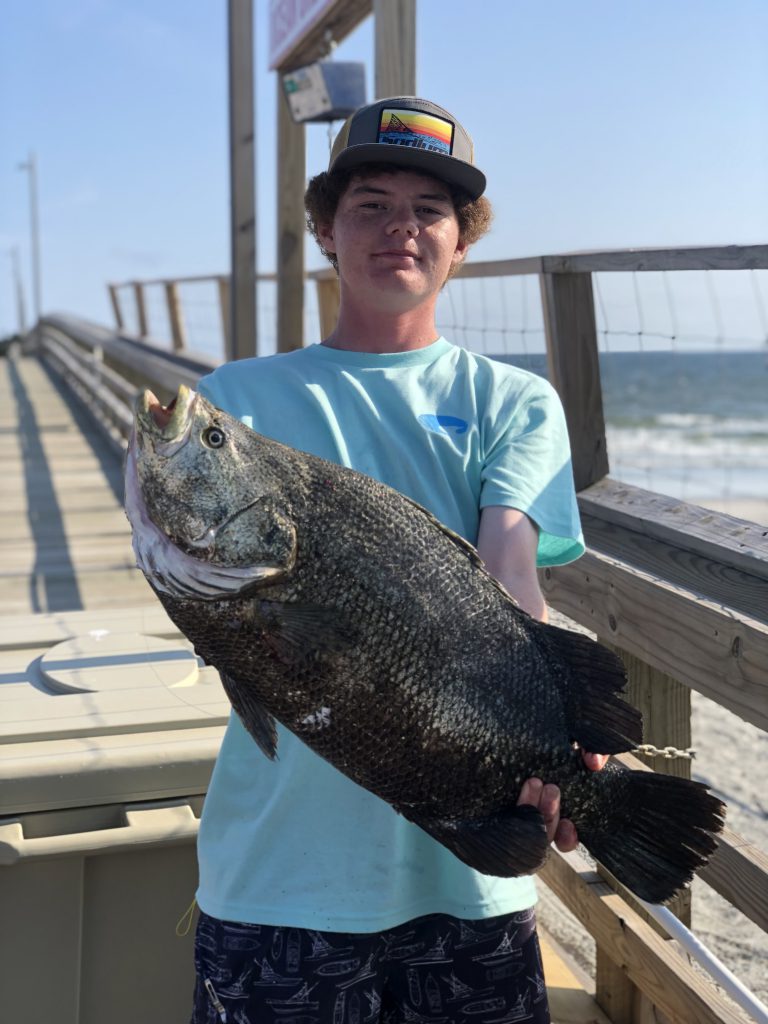 Eli Hunter with an 11.8 lb. tripletail that was caught on a Carolina rig with live mullet. He was fishing off Ocean Crest Pier in Oak Island.

Jim, of Keep the Sea Inshore Charters, reports that the early morning redfish bite on shallow flats has been on fire. Topwater plugs, spinner baits, or soft plastics rigged on lightweight (1/8 oz.) Texas Eye jig heads are all getting strikes. Anglers shouldn’t be surprised to find a speckled trout or even a flounder taking a swipe at the topwater plug.

Around mid-day, it has been best to change gears and fish shaded docks with deeper water using Carolina-rigged live mullet. This tactic change has been producing both slot-sized red drum and flounder.

When conditions permit a run to the nearshore wrecks, anglers are being rewarded with solid action on flounder and gray trout. Carolina-rigged mullet or menhaden work well, as does 2 oz. Spro bucktail jigs. Adding a Gulp soft plastic trailer is a great move if the bite seems a bit slow.

A few nice-sized red drum will be holding on these same nearshore structures, which make for a nice bonus catch.

Mark, of Angry Pelican Charters, reports that nearshore trolling has been producing good action (and trolling also keeps the boat moving which keeps anglers cool). Limits of spanish mackerel and scattered bluefish are being caught with Clarkspoons fished behind planers.

Schools of false albacore are popping up around bait schools in the same nearshore areas.

Fishing live baits anywhere near structure has been producing plenty of sharks.

Further off the beach, king mackerel seem to be holding out over structure, and they will stay there until waters along the beach begin to cool.

Ryan, of Fugitive Charters, reports that some king mackerel are pushed in as close as the 1-2 mile range. Live pogies have been producing some of the larger specimens, but live bait hasn’t been great for high numbers.

A few tarpon are being caught on baits fished in deeper holes around nearshore structure.

Spanish mackerel fishing has been hit or miss, with anglers either finding large schools of very small fish or a few larger spanish (to 5+ lbs.).

The 15-20 mile range has been scattered, with trolling producing modest catches of mahi and king mackerel. Both species are hitting cigar minnows pulled on dead bait rigs.

Bottom fishing has been great over the past few weeks. The offshore structures are holding large beeliners and keeper black sea bass readily feeding on cut baits, and getting a large, live bait down has produced some nice grouper.

Nearshore structure areas are producing king mackerel for anglers slow-trolling live baits, and a few cobia held over at these reefs all summer and are mixed in the action. 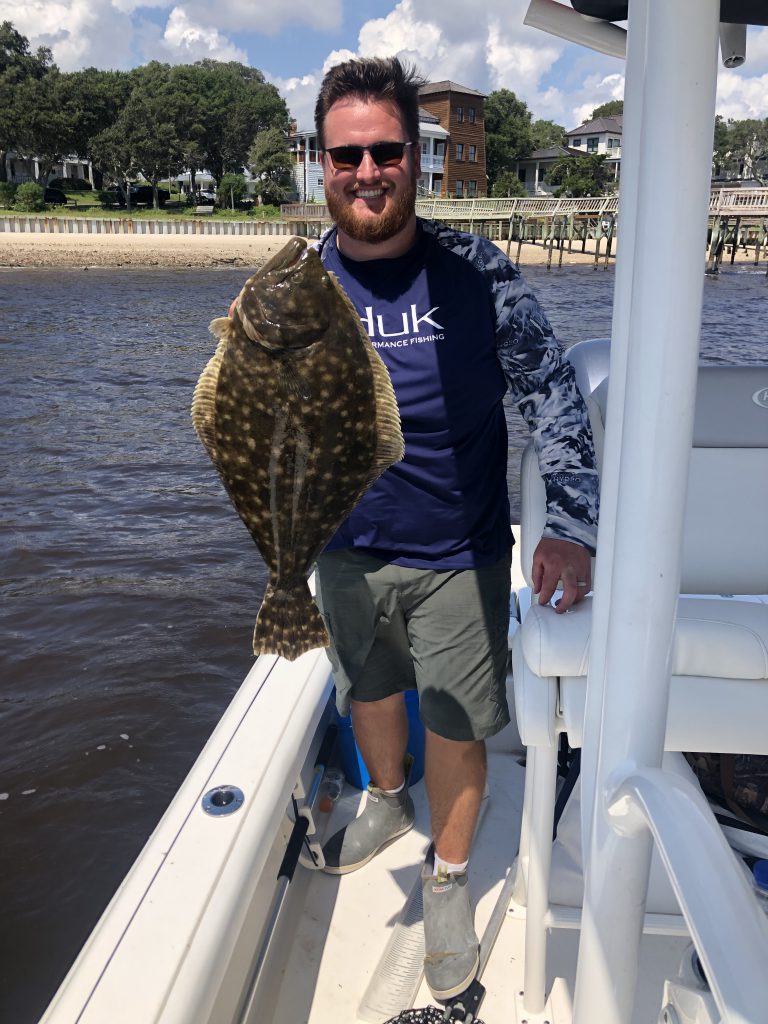 Joshua Mitchell, of Winnabow, with a 25” flounder that was caught (and released) using live mullet on a Carolina rig while fishing near Southport.

Lynn, of Ocean Crest Pier, reports that good numbers of spanish mackerel are being hooked by anglers rigged with Gotcha plugs when a feeding school pops up.

Bottom fishing with live bait has been producing some flounder.

Carolina-rigged cut bait is getting some action from scattered red drum cruising the beaches, and a nice tripletail (11 lbs.) was recently added to the catch list.

Speckled trout action remains steady, with a few being landed early before the heat sets in.

David, of Oak Island Pier, reports that king mackerel are being caught with live baits off the end. This action only gets better as more kings move onto the beach with cooler weather and water temperatures.